It all began with August Horch, one of Germany’s pioneering personalities automobile engineers. He set up business on his own in 1899, establishing Horch & Cie. Motorwagen Werke in Cologne on November 14 of that year. August Horch left the company in 1909 and immediately established a second car company in Zwickau. Because his surname was already in use and was protected by trademark, he chose its Latin translation for the new company.

So “horch!” – or “hark” – became “audi!”. The Audi brand established a tradition of sporting achievement from the very outset.

Thanks to his victorious involvement in the Austrian Alpine Runs between 1911 and 1914, August Horch succeeded in making Audi internationally known within just a few years. The Audi four-ring emblem symbolises the merger in 1932 of four previously independent motor-vehicle manufacturers: Audi, DKW, Horch and Wanderer. In 1969 Auto Union GmbH amalgamated with NSU Motorenwerke AG.

I choose to analyze porter five forces of Audi, because I like the appearance of Audi SUV Q5 and Q7. And I deserve to own my car in the few years when I have enough money.

Thus, for me, it has some help that I have the knowledge of the background.

Explanation of the Porter Model

Porter five forces analysis is a framework for industry analysis and business strategy development. It draws upon industrial organization (IO) economics to derive five forces that determine the competitive intensity and therefore attractiveness of a market. Attractiveness in this context refers to the overall industry profitability. An “unattractive” industry is one in which the combination of these five forces acts to drive down overall profitability. A very unattractive industry would be one approaching “pure competition”, in which available profits for all firms are driven to normal profit. This analysis is associated with its principal innovator Michael E. Porter of Harvard University (as of 2014).

The amount of capital required to start a car company is enormous. For the average person, they can’t come along and start manufacturing automobiles. As to build an auto firm, they need many factors like the site, labor and the support of technology, which be obtain by capital. Thus, the capital is the biggest factor for the creation of auto firm.

Technology also is an import factor to build the auto firm. It is complicated not only for the auto firm itself, also for the parts suppliers. As we know, production of the cars can’t complete by the auto firm, which has significant influence by the automotive suppliers. Meanwhile, ideas and technology that provides competitive advantage over others when patented, preventing others from using it and thus creates barrier to entry.

There are already significant well established competitors. Globalization the tendency of world investment and businesses to move from national and domestic markets to a worldwide environment, is a huge factor affecting the auto market. Thus, many auto firms are able to compete with the others from domestic markets to the world. Competition will become more violent than the past.

Although government’s job is to preserve free competitive market, it restricts competition through regulations and restrictions. Thus, government regulations are a big part of barriers for the auto industry. Automobile firms need to observe safety design, emission standards and fuel efficiency by government. And different countries have various policies and restriction on automobile industry for instance Economic Commission of Europe.

Marketing a new brand can be difficult. Not only distribution costs and marking costs are very expensive, but people cannot easy to accept a new brand especially auto brand. People will be worried on the performance and safety of cars. For this reason, marking a new brand is a barrier to entry automobile industry.

For automotive suppliers, there are two different situations which due to different bargaining power. Firstly, some strong suppliers (e.g. BOSCH, DENSO) have big discourse power to auto companies and the market, as they supply many products for a number of auto companies (not only Audi). The suppliers have more market share than the others and much revenue. And the products of the suppliers have patents and are not able to replace through changing the suppliers. If there are few suppliers providing material essential to make a product then they can set the price high to capture more profit. Powerful suppliers can squeeze industry profitability to great extend. Thus, auto companies are vulnerable to the suppliers. Secondly, some suppliers are often small and medium size, whereas car companies are large and globalized. Many suppliers are dependent on a single car manufacturer, as they just have the capacity of supplying a litter product.

Moreover, as we know, globalization has greatly increased the possibility to lower-cost but suitable suppliers. If an automaker decided to switch suppliers, it could be devastating to the previous supplier’s business. As a result, suppliers are extremely susceptible to the demands and requirements of the automobile manufacturer. For many years, the relationship between assemblers and suppliers has been straightforward. Because each car was designed from scratch and seen by the automaker as a unique product, all investments in solutions and technologies for new models were undertaken by the automaker. Given this market setting, it is easy to conclude from the above discussion that no role existed for the supplier at the development level. At the manufacturing stage, particularly for simpler parts where there was a well-developed market, subcontracting would naturally occur. [3] For this reason, Audi AG has significant power to these suppliers.

For Audi cars, customers may be distinguished by the power of economic function. While consumers are very price sensitive, they don’t have much buying power as they never purchase huge volumes of cars. However, the price is not a main factor for the people who have capacity of buying luxury cars. The customer can freely choose the product that best fits its preferences, status and lifestyle among many. Customers can find many different brands and car models in the market, paying attention to widely differing performance, quality, appearance, pricing, additional features.

Customers have substantial power, mainly because of the large variety of luxury brands and product to choose from, and because of the presence of substitutes. The presence of many substitutes to luxury cars enhances significantly the bargaining power of potential customers. Buyers have the power to demand lower price or higher product quality from industry producers when their bargaining power is strong. [4] On the other hand, it is positive to help the auto firms develop and promote themselves.

Substitute products have two different types. Other types of transport can fulfil the commuting of demand, such as motorbikes, bicycles, public transportation systems, planes. To personal considerations, people will find substitute products. Jogging and bicycle can give people a healthy lifestyle, while protects environment by choosing transport. While we analyze porter five forces of Audi, we should consider not only other types of transport for substitute products, also concern cars themselves. As customers choose cars of other brands in the marker, which replaces the cars of Audi. If we consider the problems which use other brands to substitute the Audi, we will find the relativity between bargaining power of customers, threat of substitute products and competitive rivalry.

With increasing number of substitute products, bargaining power of customers and competitive rivalry will become increase at the same time. For Audi, BMW and Mercedes-Benz are the most obvious substitutes in the market of mid-luxury cars. Or either higher-end cars which ultra-luxury brands (such as Ferrari, Lamborghini, Rolls Royce, Bentley)and the other end of the spectrum, less expensive cars from non-luxury brands (such as Toyota, Ford, Fiat, GM) are able to participate in the competition. Actually, the distinction between luxury cars and non-luxury cars itself is rather blurred sometimes. Pressure of the bad economic climate induces customers to choose less expensive cars, as their income decreases and expectations on the future worsen. Thus, threat of substitute products change with demand of our lives and the situation of economy.

The rivalry between companies is rather intense, especially between the three global leaders: Audi, BMW and Mercedes-Benz. It is not simple that three companies have competitive rivalry. Because trends that are not radical that you lose touch with the market, but that go far enough that the market is prepared to follow. [2] It means a little mistake will make the auto firms lose its market. The three companies explicitly recognize each other as competitors, and their public statements and advertising campaigns make provocative comparison between the cars as to performance and innovativeness. Technological innovation is one of the fields of fiercer competition, as each of them claims to be technological leader in the industry. As previously said, substitute products will intensify competitive rivalry. With the development of Asian market, there are new luxury brands taking part in competition, such as Lexus, Infiniti and Acura. As we can see, competitive rivalry will be more intense that the past.

Audi is clearly aiming to be a leader in automotive sustainability and is therefore stronger for it. Investment into production and vehicle technology can only increase the carmaker’s potential to become carbon-neutral. Investment into new technology could also be the cause for Audi’s biggest weakness: its cars’ reliability issues. Fitting complex electronic systems to every single one of its new cars, Audi has received a poor rating in many aspects of reliability. [5] The other weakness is about design language of cars of Audi. For the normal people who are not really into cars, they can’t really point out the differences between the A4 and the A6. Therefore, Audi need to make their productions diversified. In Audi annual report 2013, trends that are not radical that you lose touch with the market, but that go far enough that the market is prepared to follow.[2] Thus, Audi need to find a balance between trends, technology and design.

Thus, when people find they have many substitute products to Audi cars, bargaining power of customers, threat of substitute products and competitive rivalry are high. Auto industry has many barriers and violent competition rivalry which not be limited in mid-luxury cars market. Meanwhile, there are many difficulties and challenges, as the situation of global economy is not well that the past. However, with appearing the burgeoning Asian market, such as China and India, auto industry has many chances to develop themselves or walking away from difficulties. 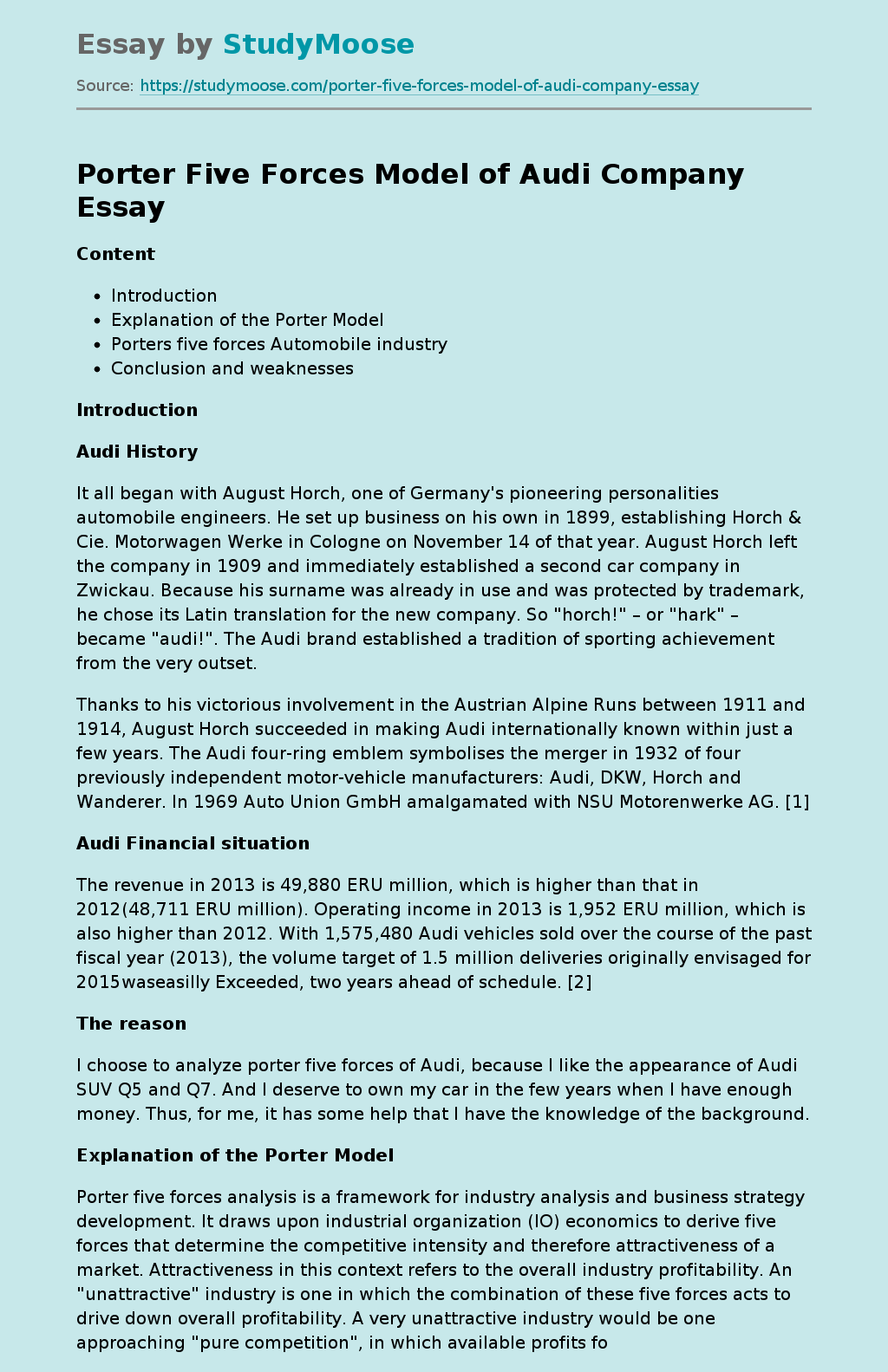