The model of the Five Competitive Forces was developed by Michael E. Porter in his book „Competitive Strategy: Techniques for Analyzing Industries and Competitors“in 1980. Since that time it has become an important tool for analyzing an organizations industry structure in strategic processes.

Porter’s model is based up on the insight that a corporate strategy should meet the opportunities and threats in the organizations external environment. Competitive strategy should be developed based upon forecasting of the available information on the developing competitive environment and other threats faced .

Don't use plagiarized sources. Get your custom essay on
“ Porter’s 5 Forces in a Book Competitive Strategy ”
Get custom paper
NEW! smart matching with writer

Porter was able to identify five competitive forces that that shapes the different industry and market. Porter five forces do was able to interpret the intensity of the competition and also the profitability and attractiveness of an industry. The corporate strategy is devised to improve the position of the respective industry in there market position as well as in brand form. Porter’s model provides the analysis of the driving forces in an industry.

Based on the information derived from the Five Forces Analysis, management can decide on how to influence or to exploit particular characteristics of their industry.

The Five Competitive Forces are typically described as follows:

Suppliers comprises of all the sources for inputs that are needed in order to provide/produce goods or services. Supplier bargaining power is likely to be high when:

In these situations, the buying industry does face a high pressure on margins from their suppliers. The relationship to powerful suppliers can enormously reduce strategic options for the organization.

If the competition in an industry is higher, the easier it is for other companies to enter this industry. In such situations, new entrants could create major determinants of the market environment (e.g. market shares, prices, customer loyalty) at any time. There is always pressure for reaction and adjustment for existing players in the industry. The threat of new entries will depend on the extent to which there are barriers to entry. These are typically

A threat from substitutes exists if there is an alternative product with lower prices of better performance parameters for the same purpose. This could attract a significant proportion of market volume and hence reduce the sales volume for existing players. This category also relates to complementary products. Similarly to the threat of new entrants, the treat of substitutes is determined by factors like

Use of the Information from Five Forces Analysis

The Five Forces Analysis allows the user to determine the attractiveness of an industry. Also, it provides visibility on profitability. Thus, it helps to decide about the entry or exit from an industry or a market segment. Moreover, the model can be used to compare the impact of competitive forces on the own organization with their impact on competitors. Competitors may have different options to react to changes in competitive forces from their different resources and competences. This may influence the structure of the whole industry.

If done along with a PEST-Analysis, which provides the drivers for change in an industry, Five Forces Analysis can help to give insights on the potential future attractiveness of the industry. Expected political, economical, socio-demographical and technological changes can influence the five competitive forces and thus have impact on industry structures. In general term to determine potential changes in competitive forces.

With this knowledge on intensity and power of competitive forces, organizations could develop options to control them in a way so to improve their own competitive position. The result could be a new strategic decision, e.g. a new positioning, differentiation for competitive products of strategic partnerships.

Thus, Porters model of Five Competitive Forces gives a systematic and structured analysis on market and their structure and what likely be competitive situation. The model can be used on particular companies, market segments, industries or regions. Hence, it is needed to determine the scope of the market to be analyzed in a first step. Then, all relevant forces for this market are identified and analyzed. Though, it is not necessary to analyze all elements of all competitive forces with the same depth.

The Five Forces Model is based on microeconomics. It also takes into account the supply and demand, complementary products and substitutes, the relationship between volume of production and cost of production, and market structures like monopoly, oligopoly or perfect competition etc.

Influencing the Power of Five Forces

The following figure provides some examples. They are of general nature. Hence, they have to be adjusted to each organization’s specific situation. The options of an organization are determined not only by the external market environment, but also by its own internal resources, competences and objectives.

Reducing the Bargaining Power of Suppliers

Reducing the Bargaining Power of Customers

Reducing the Treat of New Entrants

Reducing the Threat of Substitutes

Porter’s model of Five Competitive Forces has been subject of critique for many years. Its main weakness results from which year it was developed. In the early eighties, the global economy. was characterized by cyclical growth Thus, primary objectives consisted of profitability and survival. A major prerequisite for achieving these objectives has been optimizing strategy in relation to the external environment. In early days, development in most industries has been fairly stable and predictable, compared with today’s dynamics. In general, the meaningfulness of this model is reduced by the following factors:

Overall, Porters Five Forces Model still has some major limitations in today’s market environment. It is not able to take into account new business models and the dynamics of markets. The value of Porters model is more that it enables managers to think about the current situation of their industry in a structured, easy-to-understand way – as a starting point for further analysis.

Facebook (formerly [thefacebook]) is an online social networking service headquartered in Menlo Park, California. Its name comes from a colloquialism for the directory given to students at some American universities.] Facebook was founded on February 4, 2004, by Mark Zuckerberg with his college roommates and fellow Harvard University studentsEduardo Saverin, Andrew McCollum, Dustin Moskovitz and Chris Hughes. The founders had initially limited the website’s membership to Harvard students, but later expanded it to colleges in the Boston area, the Ivy League, andStanford University. It gradually added support for students at various other universities and later to their high-school students

The Power of Consumer

Here customers are those company which are advertising in facebook. Being a large social network , it attracts a large number of advertisers who want to advertise in the platform. Hence, , the bargaining power of customer is low. , in later years if there is a new competion emergence power balance can vary.

The power of supplier

Users are the suppliers,As of 2012 report the users numbers are more than 1 billion globally. the power of suppliers is low. Here the suppliers have no other customer , that is there is no other availiable social sites hence they have to stand by facebook for the time being.

The threat of substitute products

There are many upcoming products which is providing servie similar to that of facebook. Products such as Skype, WhatsApp, Google+, etc. are always a danger being substitutes for Facebook. Hence, the threat of substitute product is high. To maintain dominance, they always have to stay ahead of the tech ,also the trend and outperform possible substitute products.

The chance of new entray is high. There are always disruptive innovations happening in the social space. As a result new similar products keep creeping. Facebook especially needs to improve its product

The field of social network is highly competitive. The most recent example was when Google launched social network Google+ that could be accessed by all Gmail users through the web as well as Android devices. Although Google+ has not been greatly successful in outwitting Facebook, we cannot rightly predict what lies ahead in future. Hence, the competitive rivalry that Facebook faces is high.

Porter’s 5 Forces in a Book Competitive Strategy. (2016, May 08). Retrieved from https://studymoose.com/porters-5-forces-in-a-book-competitive-strategy-essay 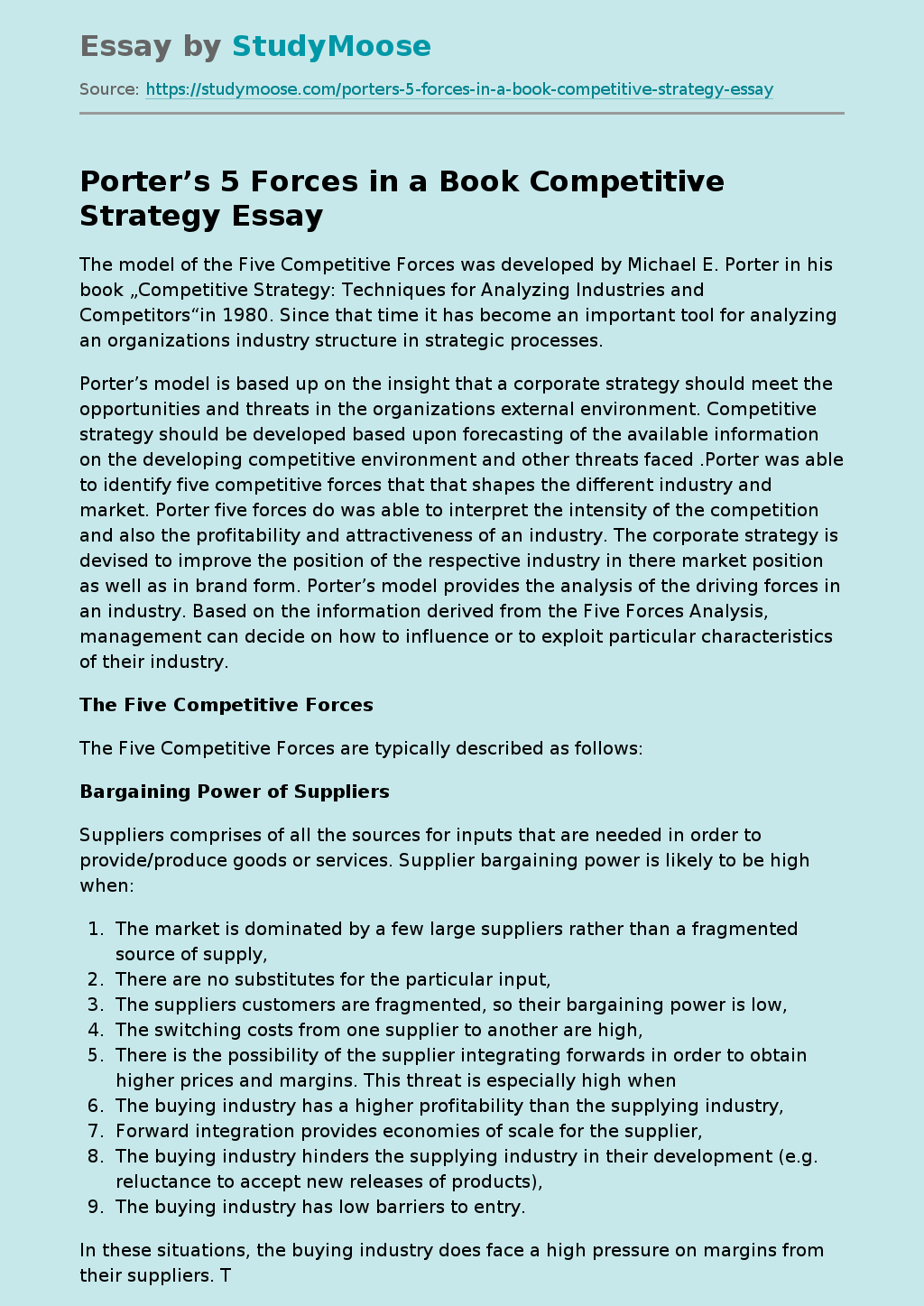