Five Psychological Perspectives and How They Fit in My Life

Out of the 7 perspectives there are only really three that pertain and fit in my life. I had to really sit down and contemplate which of the other perspectives could fit into my life. After thinking about it for a while I was finally able to come up with five. The main three would be the behavioral perspective, the psychodynamic perspective, and the humanistic perspective. The two that I had a bit more trouble on would include the cognitive perspective and the biological perspective.

Don't use plagiarized sources. Get your custom essay on
“ Five Psychological Perspectives and How They Fit in My Life ”
Get custom paper
NEW! smart matching with writer

The combination of these five perspectives sums up most of the way I think and definitely sheds a light on why I do the things that I do as an adult.

This is probably the one that fits the most in my everyday life. I have four kids, and learned when they were very young that the easiest and fastest ways to get them to do what the needed to do was by positively reinforcing them. For example when I was potty training my oldest child there was a rewards system in place. Every time that he used the potty like a big boy he received either a small treat or a small toy.

When he didn’t use the potty than there was no reward. It was one of the only things that would work when potty training him. That small little reward was enough to teach him how to use the toilet. The same was also used in stopping bad behaviors. Punishments are given out for bad behavior. These punishments are usually something that he absolutely hates. The knowledge that if he does something that he isn’t supposed to do there will be an unpleasant punishment helps reinforce the good behavior. I think sometimes the reinforcement can go wrong, if not done correctly, but if used right, can make a world of difference.

The next one, the psychodynamic perspective, I think plays a very large role in my life.this perspective was originally known as psychoanalysis and was based off of Sigmund Freud’s work. This perspective focuses on the unconscious and early childhood development. Its basically about how our early childhood experiences shape the way we act and think as adults. Its thought to help with the development of self and with the discovery of motivations. This is a perspective that I see not only in my life but also in those around me. I am able to see how the way that I think and act is based on what I seen and experienced as a child. As far back as I can remember I adored my grandfather. He was my everything. One day he went away, and he never came back. I was so young that at the time I didn’t have a real understanding of death, all I understood was that he left me. That experience is something that I remember as clear as if it had happened yesterday. It led to me having trust issues, and always fearing that people are going to leave me. Its caused more heartache than I can even begin to describe. I think it was actually the leading force that caused me to stay in an abusive marriage for ten years.

I was so afraid that my abusive husband would leave me and that I would end up all alone. One of the other clear memories from my childhood was marching a in a drum corps.. Doing this at such a young age taught me a lot. It helped to shape the person that I became. It was something that taught honor, loyalty, dedication and as an adult it is a huge factor on the way that I interact with people and my surroundings.

The third one that I thought fit in my life was the humanistic perspective, also known as humanism. This perspective is often called the third force and emphasizes empathy and stresses the positive in human behavior. It focuses on ways to help improve self image and assists in finding the things that make a person feel worthwhile and meaningful. I think it’s this perspective that makes it where I am so good at the job that I do. I am an at home caregiver, giving people that are disabled, or that would normally be in a nursing home the opportunity to stay in their homes. I go and take care of these people because I can’t stand the thought of someone hurting, in need, and left alone. I have a great empathy for people that need help and often find myself assisting people in random places because they need the help. I think that this is also why I stayed in the marriage I was in for so long. I wanted to believe that underneath all that evil there was still some good in him, and that it just needed someone who was patient to bring it out. I still think there is probably some good in him but to be able to find it he would have to be willing to make drastic changes in his life and I don’t think that’s something that he will ever be willing to do. For so long the self image I held of myself was so low that I hated myself and everyone around me. My ex husband didn’t help things by putting me down, and it wasn’t until I actually sat down and thought about what made me feel useful did I realize the rut that I had allowed myself to fall into. Once I changed my self image, everything else started to follow suite. I was able to find where I belonged in life, and was much happier. This also what helped me to leave my husband. I was able to see how toxic the relationship was, and was finally able to make better choices for my own well being and the well being of my children. Having a positive self image is something that I struggle with every day but it is getting better.

The next perspective took me a little longer to really think about. The cognitive perspective focuses on mental process and how the brain physically works. It studies attention, language, memory, problem solving, and creativity. This was something that I was introduced to at a very young age. From my earliest memories I have always had a problem with my attention span. The doctors diagnosed me with adhd before I was even in kindergarten and I remember do tests and experiments with the doctors. These tests were primarily focused on my attention span, memory, and problem solving skills. At the time that the test were being done I remember feeling like a rat in a cage because they would put these sticky pads to my head, than ask questions, have me memorize words or phrases, and solve little puzzles. Sometimes I remember feeling like a freak, or that something was wrong with me because none of my friends and people that I knew had things like that happening to them. I think the funniest thing I can remember was one time in first grade I absolutely could not sit still. I was constantly up and down and running back and forth. Well the teacher, at the end of her rope, tied me to my chair, yet left me close enough that I was able to talk to other people. As the teacher is talking, I remember talking ninety miles a minute to the kid next to me when all of a sudden the teacher calls on me and asks me to repeat back to her what she had just said. I looked at the teacher exasperated, and repeated back word for word everything she had just said. The teacher was floored and once she was able to speak explained how just because I was able to catch what was being said didn’t mean everyone else could. I also remember in school that trying to pay attention, especially if I wasn’t interested in the lesson was something that was nearly impossible to do. It wasn’t until I got older and was able to learn new ways to focus and pay attention that I start to mellow out a bit. I still occasionally find myself drifting and bouncing from one project to the next without ever fully completing the first project. This is something I am still working on.

The final perspective I chose was the biological. This perspective focuses on the physical basis for animal and human behavior. It studies the brain, immune system, nervous system and genetics. This one fit because a lot of the mental and psychological issues that I have have been proven to be passed down genetically. They are mental problems that have been passed down through the generations. For example, I was diagnosed as bipolar manic depressive by the time I was seven years old. Around the same time I was diagnosed with migraines, a personality disorder, an anger disorder and a handful of other things. Over the years the have found that depression can be passed down genetically the same way the diabetes, cancer, or heart problems can be. This was something that we learned many years ago when we were talking to the doctors, and a very heavy family history of depression and suicide was brought to light. The degree of severity might change from generation to generation, or even skip some generations completely, but the likelihood that the mental illness is there is drastically higher than in a person that has no family history of mental issues. The same is being found out as more studies are being done concerning migraines and substance abuse.

As I have been writing this, I think I have become a little more aware of myself. I have been able to think about some of the experiences I have had throughout my life and think that I have a better understanding of me. I think the hardest part of this paper has been that I had to take an in depth look at myself. This is something that I have rarely done. For a long time I didn’t like who I was and was at a point that I really didn’t care. I was able to look at other people and could understand why they were they way they were but I wasn’t really able to do that with myself. I guess it was in a sense ignoring the obvious. The combination of all of these perspectives has explained a lot and really made me think about who I am and why. Its made me go back and look at my own history to see what happened to make me the hardheaded, stubborn, no attention span, untrusting, fearful, happy, and sometimes well adjusted person that I am today.

Five Psychological Perspectives and How They Fit in My Life. (2021, Aug 06). Retrieved from https://studymoose.com/five-psychological-perspectives-and-how-they-fit-in-my-life-essay 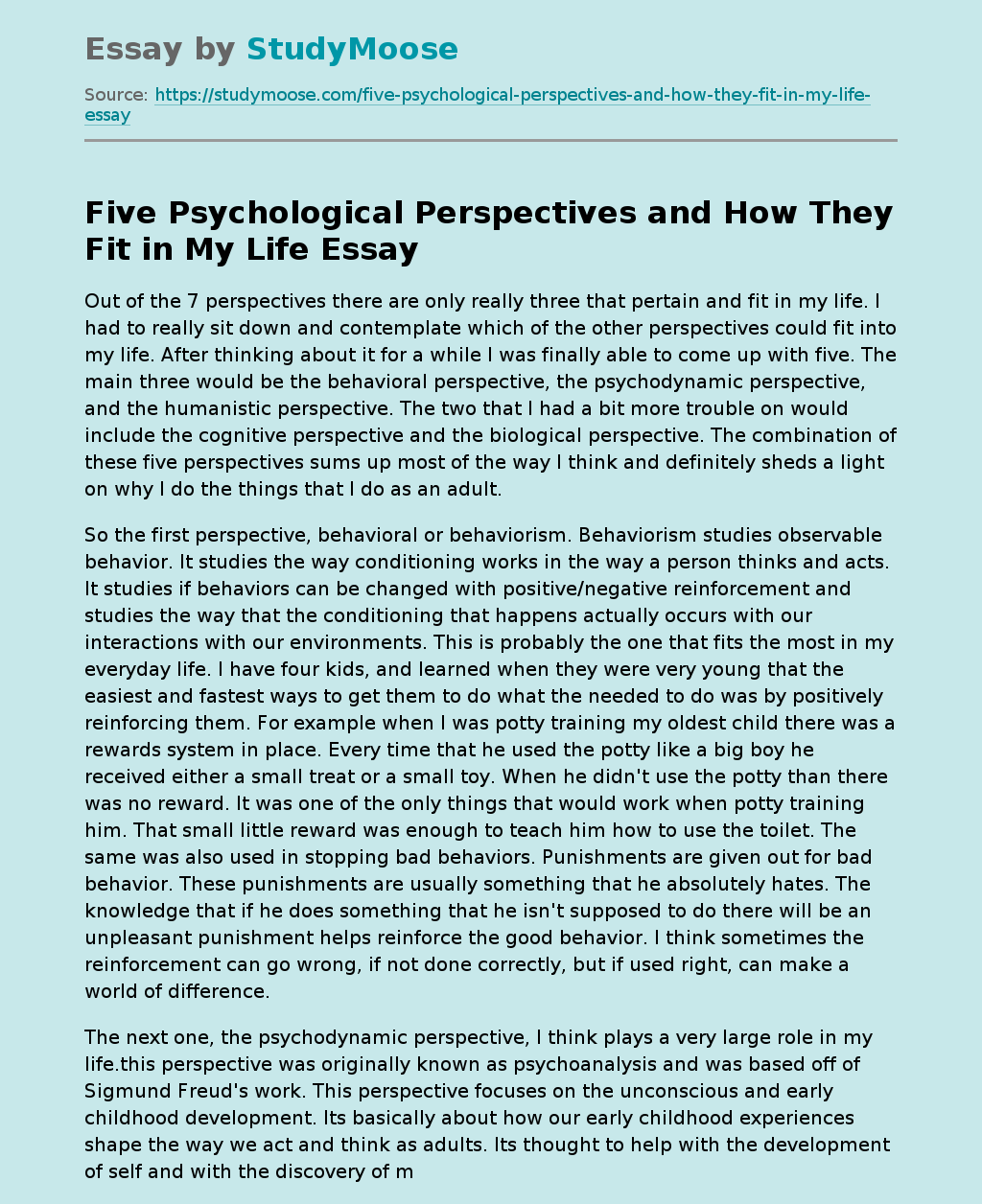