Blue jeans in the last thirty years have attained such world wide popularity that they have come to be considered an American icon. However jeans have not always been held in high stead, but rather have had a troubled history including its beginnings within the working class movement, being considered unsavory by religious leaders and also seen as a rebellious statement about ‘western decadence’. According to the University of Toronto, no other garment has served as an example of status ambivalence and ambiguity than blue jeans in the history of fashion.

Throughout this essay I will discuss how jeans have become such a common treasured and even expensive item crossing over class, gender, age, regional, and national lines as reflected by the many changing political views and acceptance from various social classes over the past 50 years. History of Blue Jeans According to the University of Toronto, blue jeans were originally created for the California coal miners in the mid-nineteenth century by the Morris Levi Strauss, a Bavarian immigrant who relocated to New York in 1847.

Mr Strauss’ fate and the history of clothing changed forever when in 1872 he received an offer from Jacob Davis, a tailor from Reno Nevada. Mr. Davis, in order to improve the durability of the pants that he made for his clients, had been adding metal rivets to the highly stressed seams. The idea was successful and he wished to patent it, but due to financial constraints required a partner and hence Levi became the financial backer and partner.

In 1873, the new partners received a patent for “an improvement in Fastening Pocket-Openings”, and thus the history of blue jeans as we know them began. Blue jeans were originally called “waist overalls” by Levi Strauss and Co and in the 1920’s these were the most widely used worker’s pants in America. The name of these trousers changed to “jeans” in the 1960’s when Levi Strauss and Co. recognized that this was what the product was being called by the young, hip teenage boys.

The history of “waist overalls” continues as the history of blue jeans. “Jeans” is now generally understood to refer to pants made out of a specific type of fabric called “denim” (Fashion Encyclopedia). Blue Jeans through the decades The popularity of blue jeans spread among working people, such as farmers and the ranchers of the American West. According to the Encyclopedia of Fashion, in the 1930’s jeans became so popular among cowboys that Wrangler formed just to make denim work clothing for those who rode the range.

Jeans have tended to follow along in popularity with popular culture as evident with the popular Western films which found adventure and romance in the adventures of the cowboys who rode horses, shot bad guys, and wore blue jeans. Those who wished to imitate the casual, rugged look of the cowboys they saw in films began to wear jeans as casual wear (Fashion Encyclopedia). This effect is not hard to understand, as even today fashion trends are greatly influenced by what highly publicized celebrities choose to wear.

During World War II blue jeans became part of the official uniform of the Navy and Coast Guard, and became even more popular when worn as off-duty leisure clothing by many other soldiers. In his book, “Jeans: A Cultural History of an American Icon”, James Sullivan states that the rise of the popularity of jeans after the WWII can greatly be attributed to the influence of the film and music industry, during the 1950s many young people began to wear jeans when they saw them on rebellious young American film stars such as Marlon Brando and James Dean.

By 1950, Levi’s began selling nationally and other brands started emerging, such as Lee Coopers and each with its own particular fit (Sullivan 287). According to the University of Toronto, in the 1960’s and 1970’s jeans were embraced by the nonconformist hippie youth movement, and the history of blue jeans even gets linked to the downfall of communism. Behind the iron curtain, jeans became a symbol of “western decadence” and individuality and as such were highly sought. Jeans had become extremely popular, but were still mainly worn by working people or the young.

In the 1980’s through to the 1990’s jeans were no longer seen as rebellious or a source of individuality, but they were transformed as the term ‘designer jeans’ was discovered. Many designers such as Jordache and Calvin Klein came on board to create expensive jeans and some jeans even reached haute couture status (Fashion Encyclopedia). In the new millennium denim is seen on designer catwalks and there are now hundreds of styles, types and labels available and of various price ranges. Changing Popularity

According to Peter Beagle in his book “American Denim: A New Folk Art”, the popularity of jeans can be attributed to the fact that jeans can be seen to embrace the American democratic values of independence, freedom and equality. Some Americans even consider jeans to be the national uniform. Blue jeans have evolved from a garment associated exclusively with hard work to one associated with leisure. What began as work clothes has transformed into one of the “hottest” items available on the consumer market today. What was once apparel associated with low culture has undergone a reversal in status.

Blue jeans were the first to accomplish a rather revolutionary cultural achievement bringing upper class status to a lower class garment. Conclusion At one point or another throughout history, blue jeans have been the uniform of many groups and are considered the one garment of clothing that has remained hip for over a century and has survived everything from World War II to the eighties. For half a century blue jeans have helped define every youth movement, and every effort of older generations to deny the passing of youth.

Fifty years ago America invented the concept of teenager, and it is probably no coincidence that the enduring character of blue jeans, claiming independence and the right to self-expression, can be traced to the same time. Jeans were once seen as clothing for minority groups such as workers, hippies or rebellious youth, but are now embraced by the dominant American culture as a whole. Works Cited “Material Culture”. Utoronto. ca. University of Toronto Department of History, University of Toronto, n. d. Web 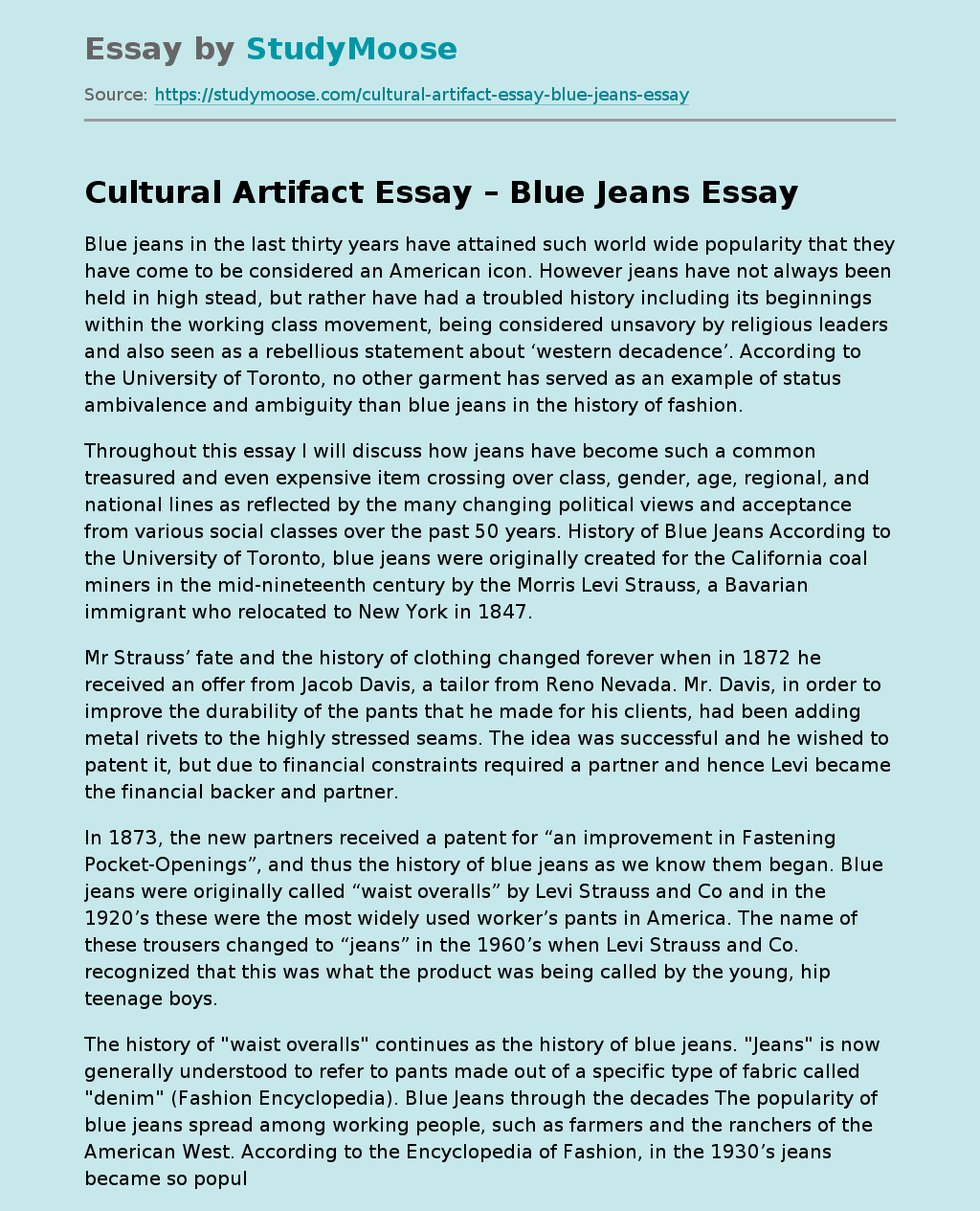