My Trip to Europe Essay

Since my childhood I dreamed about traveling around the world. Last year in summer my dream finally came true. I took a trip to Europe. I traveled to Switzerland, Slovenia, Slovakia, Austria, Germany, Norway, Sweden, Denmark, Netherlands, Belgium, France and Italy. I went to many interesting places including the Louvre and Eiffel tower in France, the castle of Koln in Germany, the Anne Frank house and the Amsterdam in Netherlands, Mountains in Switzerland, Madame Tussauds in Austria, Manneken Pis in Belgium and many more.

Don't use plagiarized sources.
Get Your Custom Essay on My Trip to Europe Just from $13,9/Page

There’s only one word to describe Switzerland, and that’s beautiful. The country turned out to be extremely clean. There are not as many tourist attractions but the scenery alone was enough to full fill my trip or I would like to say more than enough.

Zurich, Geneva, Interlaken are the main attraction places in Switzerland. Zurich’s multicultural flair and variety of leisure activities makes it popular with travelers from all over the world. Interlaken is considered the adventure capital of Switzerland and its more than 45 mountain railways, cable cars, chair lifts and ski lifts lead the adventurous to 150 miles of slopes and a dense network of hiking trails.

The architect in Netherlands was absolutely beautiful and the cities and places we went, spoke of so much history. One of my favorite places was the Anne Frank house. All my life I’ve heard of everything she went through, but to actually be in the place she stood and struggled, to read the actual journal she wrote in, it was astounding. There was so much emotion and history, and a mix of feelings that hit me. I was just extremely honored to even be there. But we waited in line for a long time since we go there in the afternoon. Another place is the capital city of Netherlands called Amsterdam. It is the place that all the teenagers are dreaming of. Amsterdam is famous for its vibrant and diverse nightlife especially the red light district. I really have some significant memories of this place.

Germany is also another place where is so much to do and so many sites to see. The historic city Lindau, The Brandenburg Gate and The ultimate fairytale castle Neuschwanstein are the most popular places in Germany and I am really happy to get the chance of visiting there. The historic city Lindau is located near the meeting point of the Austrian, German and Swiss borders in the eastern part of Lake Constance. The Brandenburg Gate is the only surviving city gate of Berlin and symbolizes the reunification of East and West Berlin.

It is regarded as one of the most famous landmarks in Europe. The ultimate fairytale castle, Neuschwanstein is situated on a rugged hill near Füssen in southwest Bavaria. It was the inspiration for the Sleeping Beauty castles in the Disneyland parks. Neuschwanstein is the most photographed building in the country and one of the most popular tourist attractions in Germany. Just in general, Germany had such a pleasant atmosphere and everyone was so friendly. It was truly one of my favorite countries that we went to.

France is well known by the name of Paris. Paris is called ‘The city of Romance’ and ‘the culinary capital of the world’. There are so many phenomenal things to see and do so we never got bored. I had read about Eiffel Tower in my text books, but experiencing it for myself, is truly amazing and wonderful. We went to the top of the Eiffel Tower and were able to see the entire city from the top, which was jaw dropping for me. The Louvre was absolutely fantastic. Actually getting to see so many of the masterpieces of the world that I’ve learned about in class was mind blowing, especially when I saw the Mona Lisa. The streets were exactly the same as I had read in books. Paris, France is one of the most amazing places I had ever visited.

In every country I had stayed in my friend’s house. Their families were so warmhearted. So I got the chance to learn their culture being so close. I felt different environment and culture staying with each family though they all live in Europe. But one thing is in common with everyone that they were so fascinating. While I was in Switzerland I stayed with Kaj and his family. I even attended his school there and got the chance to experience their education system. It was so cool and better than ours.

In conclusion, this trip really did have an impact on my life though. It was such a great opportunity to see and really experience the different parts of the world. And believe me Norway is the most expensive country in the world. This trip planted in me, an appreciation for all the cultures and different type of people in our world. It really was a fantastic experience for me.

You may also be interested in the following: the hiking trip essay 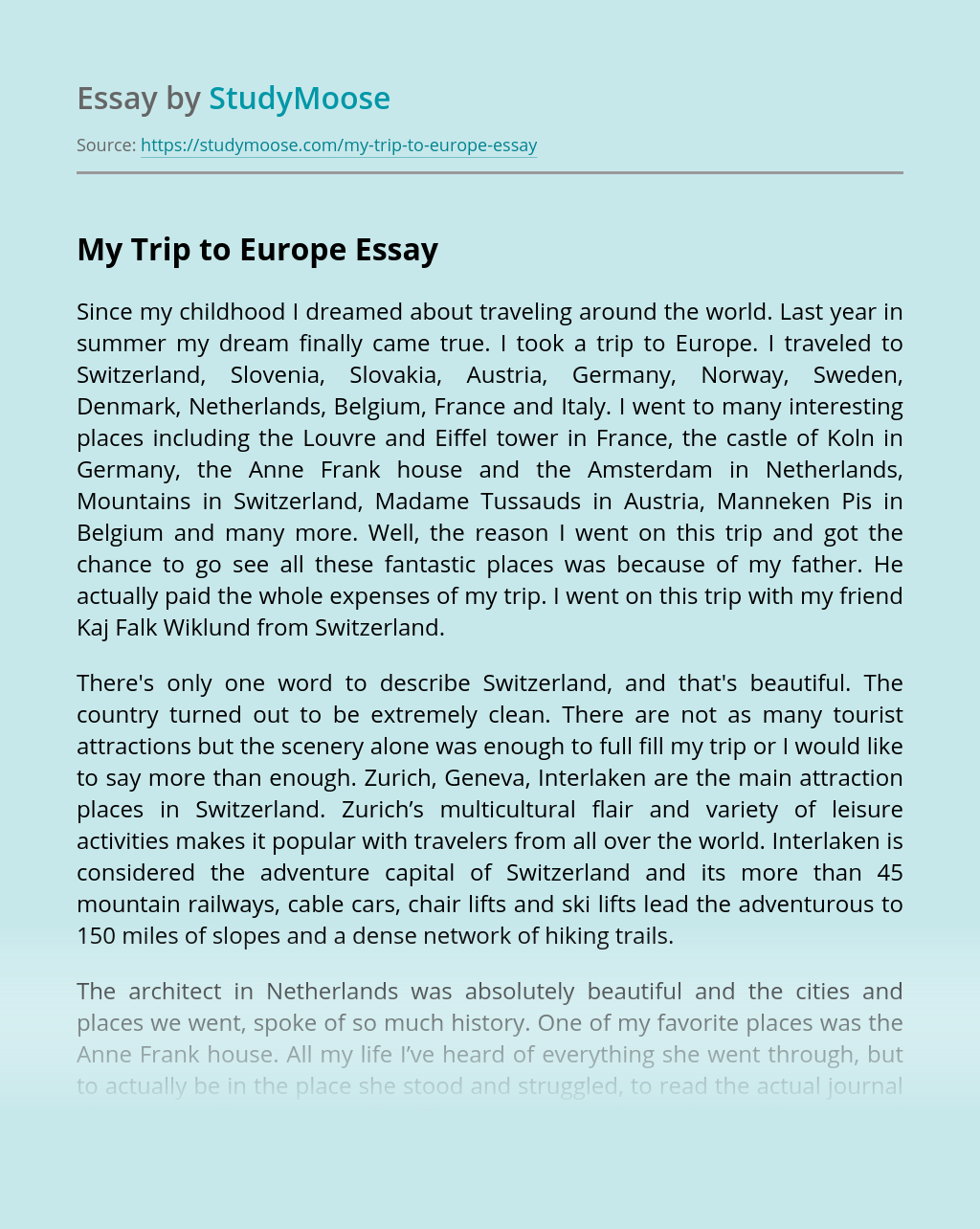 Hypothesis and Assumption: “Every wise woman buildeth her house, but the foolish plucketh it down with her hands.” (Proverbs 14.1) Lord so created the world, and he saw everything to be wonderful. The wonder of the wonders, the fairer of the fairest and the finer of the finest of God’s creation WOMAN; The feminine of... VIEW ESSAY

The normal eating schedule in today’s world is three meals per day: breakfast, lunch, and dinner. Eating only three meals a day sometimes just doesn’t cut it, especially for children whose bodies and brains are continuously growing. A snack in between meals is a good way to regain energy and to stay focused. School’s today... VIEW ESSAY

Lord Chesterfield used litotes (understatement), a pedantic tone, and a hint of a condescending tone in an attempt to convince his son to follow the advice that Chesterfield provides in the letter. When concluding his letter he warns his son that failure is not an option due to the humiliation it will bring. Lord Chesterfield... VIEW ESSAY

A yellow taxi rises up out of the Stygian haze of a New York City evening. Inside, the driver, Travis Bickle, stays alarm for travelers. A brisk flashback uncovers some data about Bickle’s experience: he is 26 years of age, was decently released from the Marines in 1973 at the pinnacle of the Vietnam War,... VIEW ESSAY