In Twelve Angry Men, a young man is on trial for stabbing and killing his father. The movie focuses on twelve randomly selected citizens who are assigned the duty of determining the fate of this 19 year old man. The jury is supposed to examine certain facts and determine the truth based solely on the evidence presented to them in court. It is assumed that the jurors will judge fairly and without personal bias. Basically, the jurors need to use critical thinking during this trial to figure out what evidence is factual and what evidence is false.

Throughout the film, some jurors were better at critical thinking than others, some had obstacles to overcome before they could use good critical thinking skills, and yet others became critical thinkers at different points during the movie. Critical thinking played a key role in Twelve Angry Men. In order to be able to think outside the box, one must possess the ability to think unbiaslly, not bring personal issues into play, not be scared to put the ideas and doubts on the table, and to be level headed.

The juror who possessed these skills the best and applied them better than his eleven other companions was juror number 8, played by Henry Fonda. At the beginning of the movie, juror 8 was the only one to vote not guilty on the first vote. Fonda’s character plainly stated “It’s not easy for me to raise my hand and send a boy to die without talking about it first”.

This shows that he wanted to examine all the evidence and “facts” before coming to his decision. As the movie went on, juror 8 kept posing questions like “could it be possible” and “could he be wrong” to remind others that about reasonable doubt. Then Fonda’s character helped find holes in two key pieces of evidence, one being the knife used in the murder. The switchblade knife was supposed to one of a kind, but juror 8 takes a knife out of his pocket and jams it into the table next to the knife that was used in the murder. The knives were identical and Fonda’s character explains that he bought it in the same neighborhood. The second piece of evidence juror 8 found reasonable doubt in was the old man’s testimony. The old claims he heard the killer yell ‘I’ m gonna kill you’, a second later he heard the father’s body fall and he saw the boy running out of the house fifteen seconds after. Juror 8 decided to reenact the scene, paying attention to detail my dragging his foot like the old man, as well as, measuring the distance so that it was accurate.

Fonda’s character proved the old man’s story was false because it took thirty-one seconds. Juror 8 payed attention to details, analyzed every detail, put aside his biases, and opened the eyes of the other jurors, this is why he was a great critical thinker. Although there were some good critical thinkers in Twelve Angry Men, there were a few jurors who just couldn’t see outside the box until it was almost too late. Juror 10 seemed to be the most close minded of all his peers, resulting in bad critical thinking. There were instances where this character stereotyped the defendant racially by saying “those people”,”them”, “they are born liars” and “they do not value human life”. Juror 10 also referred to calling the boy ignorant and a slob. This juror not only treated the defendant poorly, but his behavior towards his companions was ignorant. Juror 10 was sarcastic, insensitive, lacking morals, holding grudges, and a loud mouth. For instance, juror 10 sarcastically says “you’re a smart fellow aren’t you?” to juror 8 in response to a piece of evidence that had been shredded. All of these characteristics are ones that cloud the mind and do not allow common sense or critical thinking to come into play. There were three individuals that held so much grudhe, anger and aggression that it prevented them from thinking critically.

One of these peers was juror 3. He claimed that the defendant was certainly guilty and his reasons for thinking this was completely prejudice. He brought thoughts of anger, resentment and revenge into the jury because his own son left him. For this he thinks and blames all young folks. Another jury who was a bad critical thinker is number 2. He tends to follow the crowd and feels like its an open and closed case. He doesn’t want to see the facts as they are nor does he want to listen to what anyone says. The last juror who bad at thinking critically was 6. Though he gave juror 8 a chance, the reason was because he was too narrow headed to figure out the evidence wase. He couldn’t connect any of the dots nor did he speak up very much in the discussion. Twelve Angry Men had good examples of how the average person uses critical thinking, which is while the process of conversion is occurring? For some reason the light bulb dings on after we listen to others explain their thoughts. Jurors 9, 11 and 7 were like most of us. During the trial juror 9 kept voting guilty until Fonda’s character started talking about the old man’s character and the woman’s eyesight.

He voted not guilty after he thought about the old man’s character being alone, never had recognition in life for anything, and he wanted some so the old man lied. Juror 9 had to overcome his own perception of himself being old and not really needed for much in order to be a critical thinker and realize his opinions count too. Like juror 9, juror 7 had to overcome his preoccupation of going to a Yankee’s game. Throughout the film, he kept voting guilty and then after he heard jurors 8 and 10 talk about how the woman wore glasses and she didn’t have them on when she saw the murder. When this happened, juror 7 realized that there was reasonable doubt in the case. This only happens after he voted not guilty just to get to the ball game and Fonda’s character asks him why, which then makes 7 pay attention and think. Juror 11 was an immigrant who was scared and easily swayed by his peers.

He had the obstacle of trying to stand up for himself, understand his voice counts and that his mind works just like others. Juror 11 conquered this obstacle when juror 8 was talking about the wound, he realized that the someone taller would have had to been the killer. He also explained to the others that a switchblade is use in an upward motion. Once these characters got over their obstacles, their critical thinking skills helped open holes in the case. All in all, Twelve Angry Men was a great learning tool to what critical thinking is and how to apply. This film taught me that you have to approach decisions in a certain manner. I need to keep an open mind, be level-headed, express my opinions and not judge others. Thinking critically implies that brain power of yours and your peers is needed to get a better understanding of everyday life. Respecting others around you is key. In order to use critical thinking, one must know what it entails. 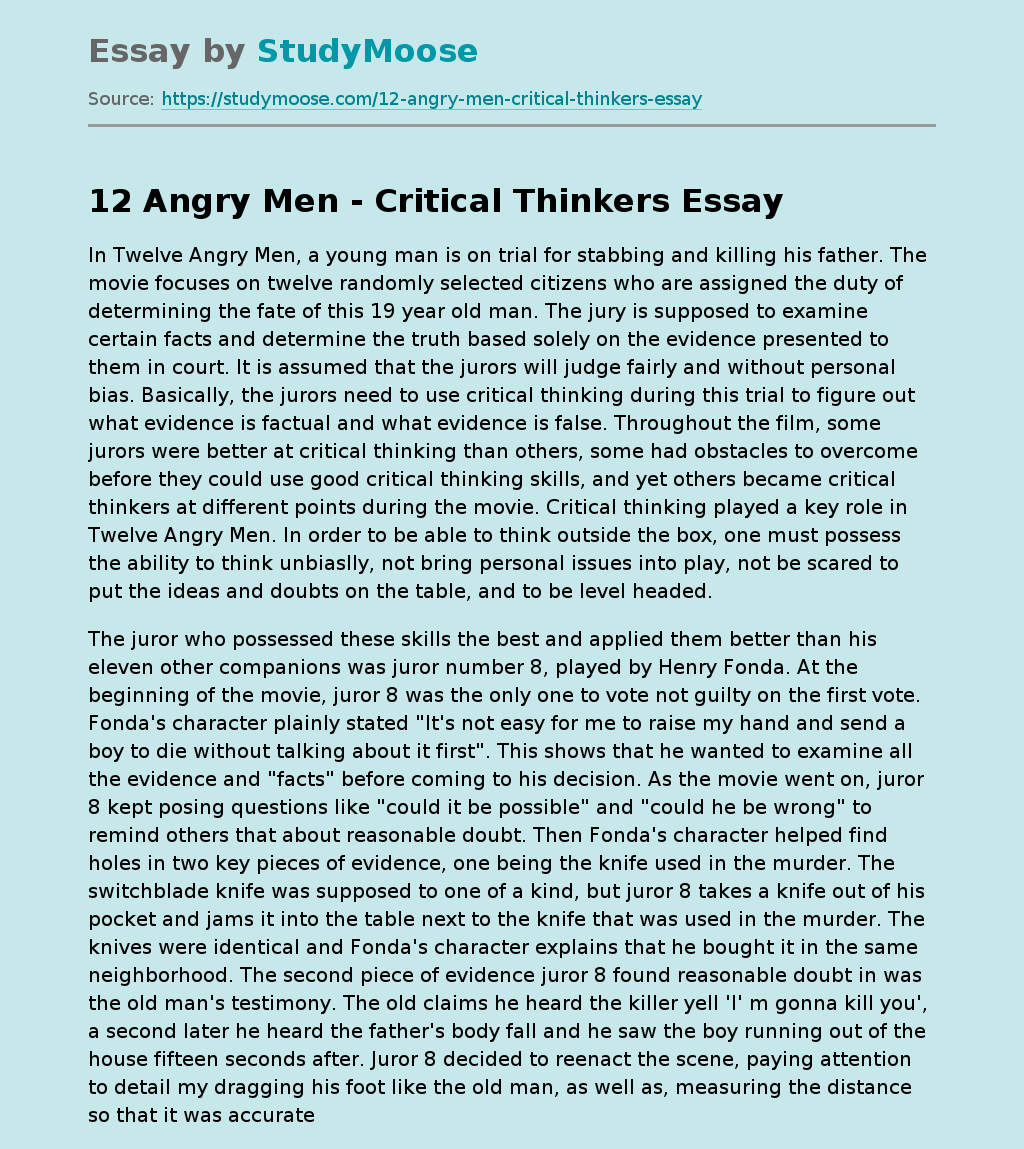