Throughout history, people with creative minds have created original ideas which have been useful in the fields of music, art, technology, medicine, and science. Most of these ideas were once branded as impossible and ridiculous, but as of today, their thinkers are considered to as individuals who achieved enormous breakthroughs which helped the world advance (Coon, 2006). Usually, problem-solving is done through mechanical and insightful means which are based on understanding; this kind of problem solving involves either deductive or inductive thinking in order to achieve solutions.

Don't use plagiarized sources. Get your custom essay on
“ Creative Thinking and Critical Thinking ”
Get custom paper
NEW! smart matching with writer

Apart from these, problem-solving may also be done logically (based on previous information or rules) or illogically (based on intuition or personal associations and perceptions). However, such is not the way of creative thinking—creative thinking involves all of these different thinking styles, “plus fluency, flexibility, and originality” (Coon, 2006, p. 360). Fluency can be defined as the number of ideas or suggestions that an individual is able to make for a particular problem. Flexibility, on the other hand can be defined as the number of times an individual shifts from one class or type of possible ideas to another.

As for originality, it is pertains to “how novel or unusual [the] ideas are” (Coon, 2006, p. 360). These can determine an individual’s creativity or his capacity for divergent thinking. Creative thinking or divergent thinking means thinking out of the box and developing possibilities. Usually, people tend to solve problems with tried solutions, but with creative thinking, individuals produce new and different ideas or answers in order to solve problems (Coon, 2006).

Creative thinking is often seen in poems, essays, constructed objects, and drawings (Coon, 2006)—however, it can also be seen in everyday life.

Since a lot of people usually go on dates by going to dinner, then watching a film, perhaps, it would be creative to fuse these two concepts together to create a much more efficient one where people can eat dinner and attain entertainment at the same time (Harris, 1998). Critical thinking, on the other hand, is an entirely different concept from creative thinking. According to Austin Cline (2010), critical thinking involves developing a form of intellectual and emotional distance between one’s self and one’s ideas in order to be able to evaluate the validity, reasonableness, and truth of such ideas.

If an individual engages in critical thinking, he should develop rational and reliable evaluations as to what is rational and logical. This simply means that if one engages in critical thinking, one must value skepticism, and engage in a search for the appropriate solution to problems. Critical thinking also involves open-mindedness, differentiating emotion from reason, arguing with the use of knowledge, being skeptical about probabilities, avoiding linguistic misunderstandings, avoid common fallacies, and most important, avoiding the temptation to jump to conclusions.

An example of critical thinking would be carefully assessing situations in order to find the appropriate actions required; a critical thinker, if perhaps stuck in a situation wherein he is faced with numerous tasks at work, plus the obligation to attend his child’s softball game, would carefully evaluate the tasks at hand, produce a schedule by prioritizing and weighing risks and advantages in order to achieve all goals (Jackson, Ignatavivius, Case, ).

Another example would be if an individual is part of a jury, and is listening to the witnesses and the defendant’s accounts of a murder; if the individual engages in critical thinking, then it follows that he should not readily believe either accounts just by taking their word for it. Perhaps the lawyer might call a witness which happens to be the child of the murdered person, and if the individual engages in critical thinking, he must not be swayed by the emotions which are shown by those in the stand, and should be critical in analyzing the facts which are presented in the case.

Creative and Critical Thinking Using a Common Example Take for example the phrase speed kills; a lot of people have a general idea about this phrase, that which consists of the fact that it is related to motorists, stating that if they over-speed, they could get into an accident and be killed.

If one is to use creative thinking in this particular phrase, the result would often involve creating new means to improve the campaign against over-speeding. Creative thinkers are often finding new means to look at things, as well as different means to present such things; therefore, these ideas would then be utilized into the development of a new, effective means to strengthen the campaign against over-speeding.

Since creative thinking is all about finding new and different ideas in order to find solutions for different problems,which, in this case, is the supposed problem regarding over-speeding, which, presumably, can kill an individual if he gets in an accident, the creative thinker would perhaps develop innovative means of educating people about this particular statement, such as developing an integration off billboard advertising and traffic warnings.

Summary As seen in the previous discussion, creative and critical thinking differ in many ways. However, while it cannot be denied that both have their differences when it comes to approaching problems, it must be understand that both have their merits and advantages. It is necessary to understand that neither can be considered better when it comes to finding solutions for life’s everyday problems.

Instead, an integration of these thinking styles would be far more beneficial, for not all situations call for either creative or critical thinking only. There are those which call for creative thinking, and there are those which call for critical thinking. It is, therefore, necessary to familiarize one’s self with both styles, for being able to adapt one’s thinking style is essential to effective decision-making processes. 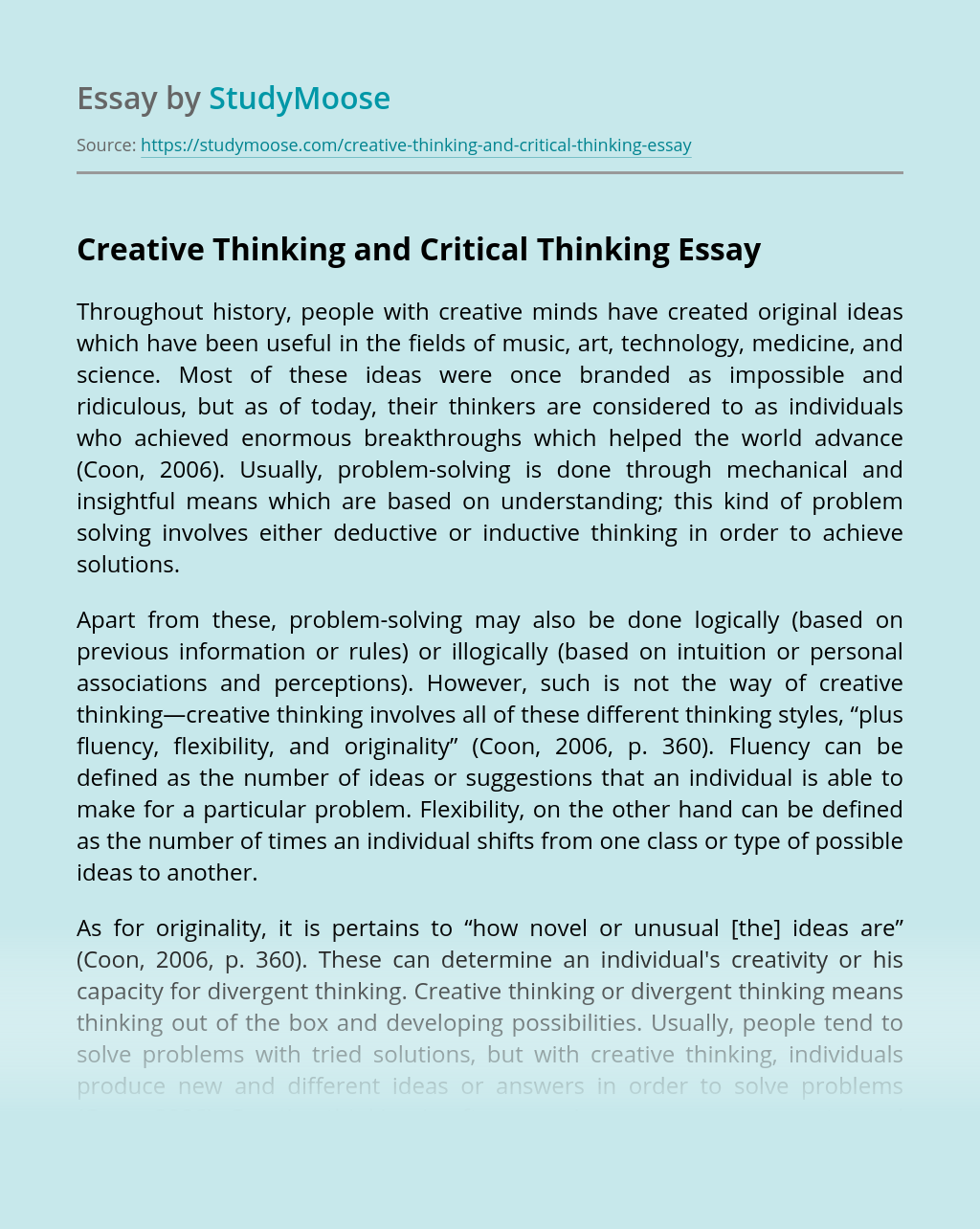