Thinking as a hobby Response: “Thinking is a Hobby”

In the essay “Thinking as a hobby,” the author William Golding writes about his past experiences. Which caused him to see the three grades of thinking. Thinkers are represented by three statues. The first being the crouching Leopard ,the crouching position refers to natural thinking , aggressiveness and most likely are ready to pounce at any moment. This coincides with the lady milo of Venus grade two thinking, which represents those who don’t over think and point out wrongs with no intent of making them right, being able “ to destroy, without being able to create.

Don't use plagiarized sources. Get your custom essay on
“ Thinking as a hobby Response: “Thinking is a Hobby” ”
Get custom paper
NEW! smart matching with writer

Whilst Grade two thinkers tend to follow the masses, grade one thinker’s question “why”, these thinkers are represented by the Man in a thinking position. These thinkers challenge ideas, and challenge themselves to strengthen their mental capabilities, they also have the ability to “destroy,” however, they only destroy in order to rebuild and correct false ideas, and finally they have a strong moral sense. These three grades of thinkers are vague, and one maybe often be categorized as two grades, as they do overlap.

When he explains grade 3 thinking, William Golding refers to them as thinkers who don’t rely so much on logic or reason to form opinions and make decisions. Instead, as Golding states, they feel rather than think. He uses an anecdote in which he writes of Mr. Houghton, a teacher which he repeatedly implies “Mr. Houghton thought with his neck” (Golding 3). He also symbolizes this grade with a crouching leopard statue, which resembles nature and being preemptive to strike. However contradictory to his beliefs, are my thoughts on this grade of thinking.

In my opinion Grade-three thinking is the beginning or our first and most natural grade of thinking. We instinctively act before thinking as children, and by doing so one learns from their wrongs and rights. When I was younger, I would occasionally feel so hungry that I’d over-eat; with having done this it’s pretty obvious that the outcome would be a tummy ache… In this essay Grade-two thinkers are described as able to see the contradictions within grade-three thinking, followers of the mass, being able to withdraw with eyes and ears open, and being able to “destroy without having the power to create.” This grade of thinking is backed by the anecdote. In which he explains the difference between grade three and two, by telling a story about himself and a potential girlfriend, Ruth, and their discussion about religion. She states King James Bible is “literally inspired.” Golding counters that the Catholics, who use the St. Jerome Vulgate version, also claim their Bible literally inspired.

Grade-two thinkers are symbolized by a damaged statue of Venus Del Milo, which represents love, and in my opinion the power to destroy but not to create, due to the broken arms. I see this category as a slight awakening of how we should be, according to human cultures that is. I see this grade as nothing but the realization of what we’ve been doing wrong, but without really attempting to make a change to prevent the problem. Going back to my tummy ache, Grade-two thinkers would realize that they are hurting their own bodies, by consuming large quantities in a small period of time. With Grades two and three, both somewhat negative, Golding finally introduces an “ideal” way of thinking, known as grade-one thinking. To bring logos onto his writing he uses an encounter with Elbert Einstein to represent how grade one thinkers should be, those who are questioning and take actions on what they believe.

Grade-one thinkers are symbolized by The Thinker which represents, “an image of pure thought” (Golding 3). At the end of this essay Golding explains how we should exploit the pros of each of the three types of thinking. He finally regards the use of all three thinking types as the ideal thinker. I believe his idea of this being the final grade is correct, I also believe his statement on using all three types of thinking to be an ideal thinker. However I believe that these grades of thinking are not categories but rather steps, or the thinking process. Grade-one represents the trial stages, grade-two the hypothesis, grade-one the solution or problem solving. I also believe we all are born grade-three thinkers, and cannot be grade-one thinkers without being a grade-two and grade-three thinker.

Thinking as a hobby Response: “Thinking is a Hobby”. (2016, May 09). Retrieved from https://studymoose.com/thinking-as-a-hobby-response-thinking-is-a-hobby-essay 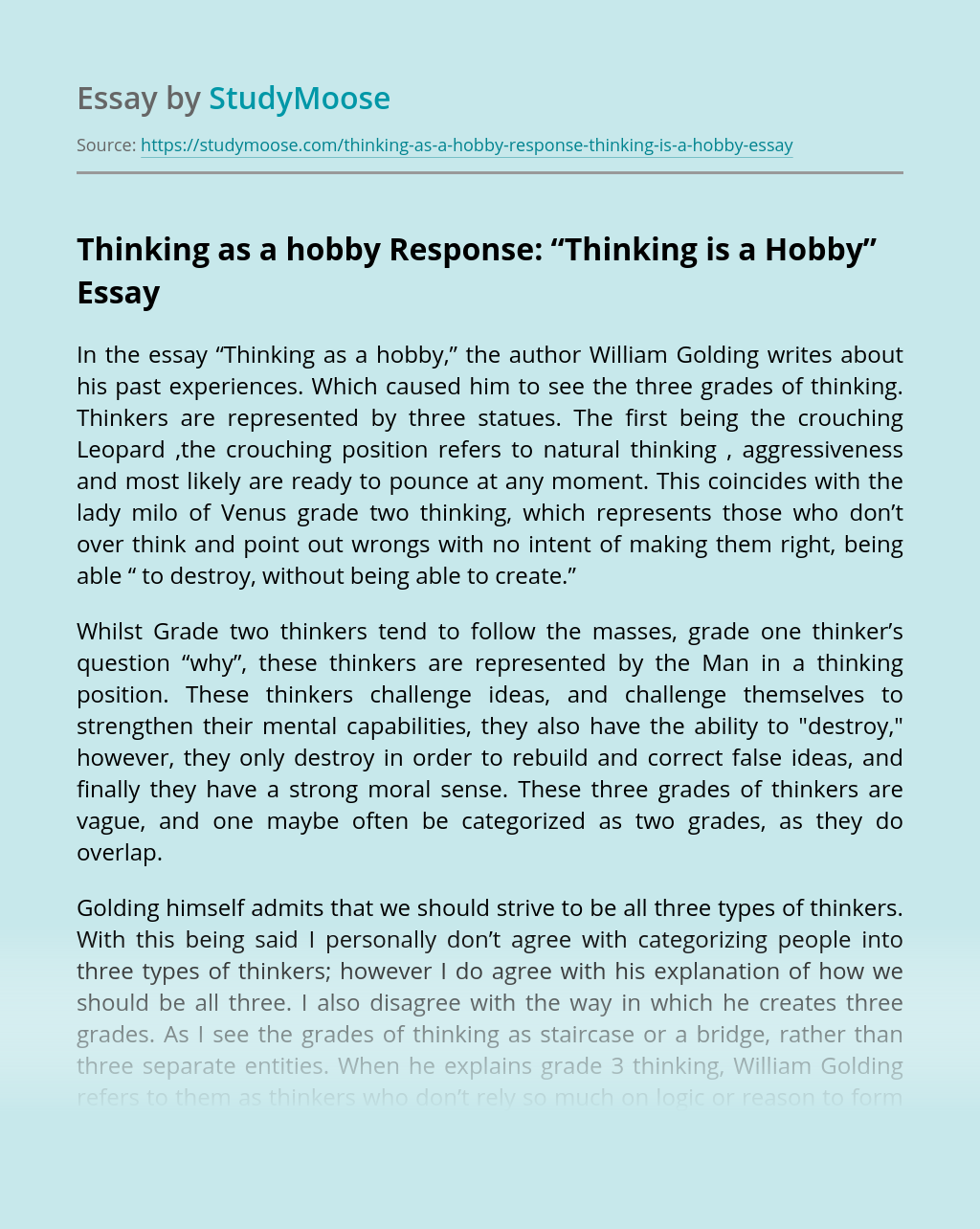