Ladies and gentlemen, I have come here to talk to you about one of my hobbies, kayaking. A common misconception is that a kayak is the same as a canoe, but this is not the case. There are a number of differences between a kayak and a canoe, the main difference is that in a kayak, you are enclosed, unlike in a canoe, whose cockpit is much like a boat. Also, a kayak is normally for one person only and a canoe is for a number of people.

Don't use plagiarized sources. Get your custom essay on
“ My Hobby- Kayaking ”
Get custom paper
NEW! smart matching with writer

Finally, in general, a canoe has only one paddle. While a kayak has two that are joined together with one shaft.

The word kayak means “hunter’s boat”. The kayak was developed by cultures in the arctic of North America for hunting. To these people, the kayak meant survival. Without it they couldn’t get food. There wasn’t much time for recreation. To obtain food they used kayaks to hunt in extremely harsh conditions.

Archaeologists have found evidence that indicates kayaks to be at least 4000 years old.

Hunting in a kayak was very dangerous. Sometimes a wounded animal wound attack the kayak, and walrus and whales were especially dangerous when injured. Occasionally the harpoon line would tangle and damage the kayak. Because the escaping normally was so hazardous, these people became quite proficient in the “Eskimo Roll” (where if you get flipped upside down, this is called capsizing, you flip yourself up again instead of exiting the kayak). The reason for this is that in emergencies, exiting the kayak into the water was very perilous; the animal that they were trying to hunt could be even more dangerous if they were attacked while inside of the water.

Rolls that are thought of as tricks now were based on actual survival techniques. The hunter may have been hurt by a wounded animal or have their hand tangled in the harpoon line, and therefore the Eskimo roll is essential to avoid drowning

These paddlers used jackets made from waterproof skins and seal intestines. Today, these waterproofs are also used as well, they are called cagoules, but they are fortunately made of fabric!

I like kayaking because it gives you a sense of freedom. The fresh air and water can be very refreshing and relaxing. A great thing about kayaking is its great diversity. The number of things that you can do and the many ways that you can do it is overwhelming. You can go with as many or as little people as you want. You can go in almost any weather as long as you wrap up warm in colder circumstances. You can do tricks such as the Eskimo roll. You can race your friends and even play games such as bulldog. Finally you can go on long sightseeing tours. The scenery is frequently breathtaking, you can get close to wildlife such fish swimming and it is not uncommon to see the adorable sight of a duck and a line of chicks following its mother. There is a large sense of satisfaction when you get better or learn something new.

Today, these hunters have replaced their kayaks with motorboats, but kayaking has become a very popular form of recreation in other parts of the world. Today’s kayaks are mainly made of plastic and wood. Their design runs from small white-water boats to 20 foot long touring kayaks that can carry several week’s provisions. The reasons we paddle may have changed, but the kayak remains a quiet, efficient and fun means of transportation whose design has stood the test of time. Thank you for listening 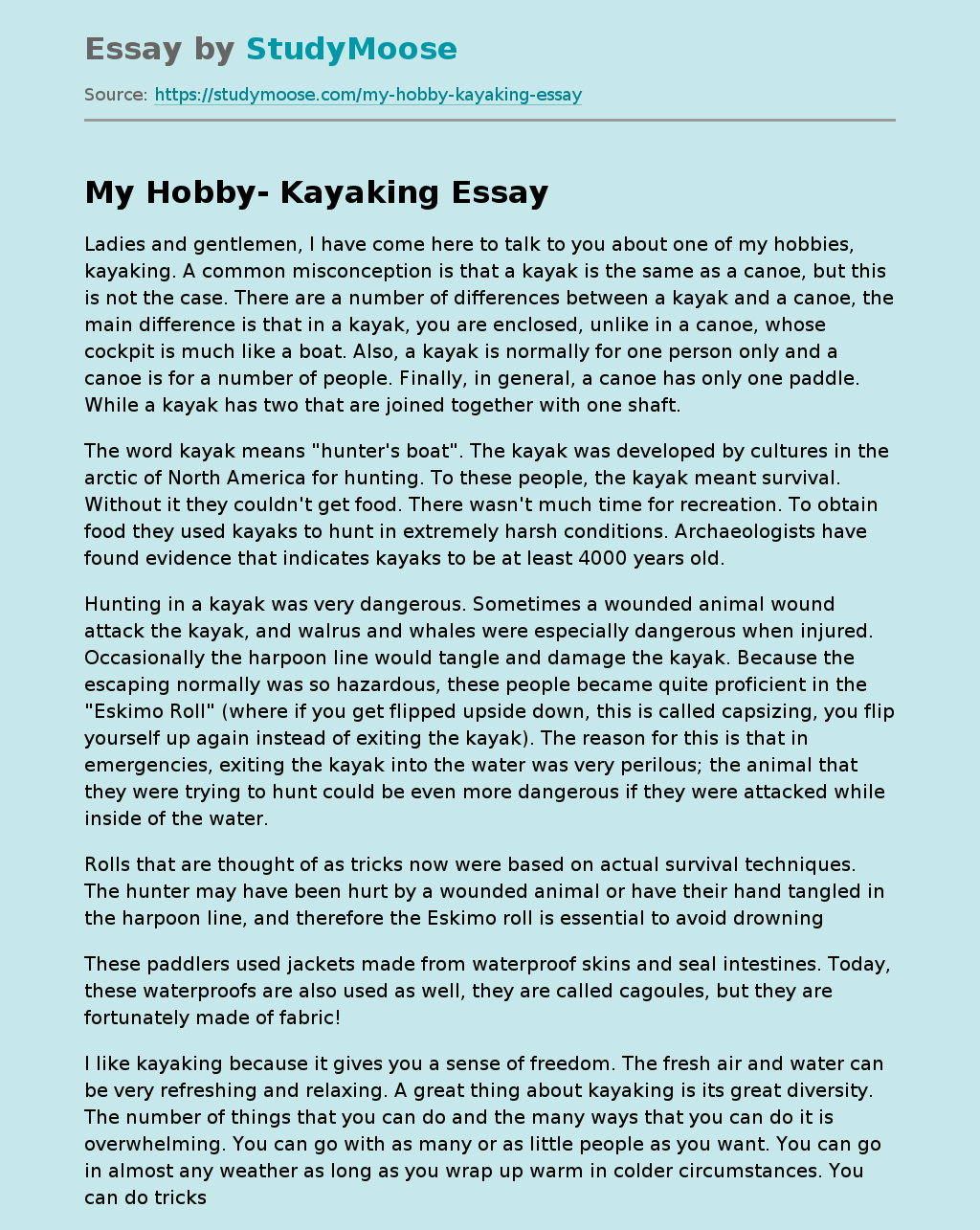