India shows a variety of dances which can be seen in various parts of the country. These dances are performed differently and are an important aspect in Indian dance because they bring the past in the present by telling us about ancient Indian history. Besides entertainment these dances are knowledgble. The Indian dance are divided in two types Indian classical dance and Indian folk dance. The Indian classical dance comprises of : Bharatanatyam, Kathak, Odissi, Kuchipudi, Mohini attam, Manipuri and kathakali.

Don't use plagiarized sources.
Get Your Custom Essay on Indian Dances Just from $13,9/Page

Besides giving us knowledge and entertaintment, these forms of dances shows unity in the diversity among people. Bharat Natyam was originated in a script called the Natya Shastra. This manuscript was written by Sage Bharata around 4000 B. C. This dance is first used to show energy and emotions and is one of the oldest form of dance among classical Indian dance.

In this form of classical Indian dance called Bharata Natyam, performers can convey beliefs, legends, and ideas through movements, gestures, and expressions put to song.

Kathak dancing performed by a dancer who stands and moves and lasya (the aspect) in which the dancer kneels or remains immobile the whole time except for the (gat) a descriptive passage, performed in a gentle rhythm and tells stories with his expressive powers only, with his face and hands. For kathakali special massage is given to the feet. The Kathakali technique of using the face expression is a pure marvel of accomplishment. Some ancient masters of this dance have such control of their facial muscles that they can laugh with one side and cry with the other.

It is therefore understood that Indian dancing is not just physical movements of hands and legs; it is a form of physical art with body and mind for both men and women alike as well as a form of worship to the Almighty Divine Gods. Kuchipudi, a form of Indian classical dance, is the dance drama evolved into solo. In this the movement pattern are flowly and rounded. The performance usually begins with some stage rites, after then character comes on to the stage and introduces him/herself with a daru (a small composition of both song and dance) to introduce the identity, set the mood, of the character in the drama.

The drama then begins. The dance is accompanied by song and the singer is accompanied by instument. Ornaments worn by the artists are made of a light weight wood. Manipuri dance is one of the major Indian classical dance forms. It originates from Manipur, a state in North-East India. The traditional Manipuri dance consists of lyrical and graceful movements. Tbe aim is to make rounded movements and avoid any jerks, sharp edges or straight lines. This gives soft appearance to Manipuri dance. Of course, behind this soft impressioon lies a tough body control.

In this dance, the dancer’s feet should never strike the ground hard enough to interfere with the delicate flow of movemets. Every time the dancer puts down his or her feet, even during vigorous steps, it is the front part of the feet which touch the ground first. The ankle and knee joints are used as shock absorbers. Manipuri dancers do not wera ankle bells, whose purpose in other Indian dances are notice the beats tapped out by the feet.. Like the movemets of the body and feet, the facial expression in Manipuri should be subtle. The main point of the dance style are devotion and grace.

Once in India I went to a show to watch Bharat Natyam with my parents and relatives.. The dance was going pretty good, but due to my ignorance about dance, I couldn’t figure what they mean by their movements. In India, the Indian classical dance is fading away with the arrival of Western Indian dance. The classical dance can’t compete with the fast music and body movents in Western Indian dance. Unlike western dance the Indian classical dance take about 12 years of learning which can’t be spent in today’s fast moving and modern generation.

The present generation have a task to make these dances easy to learn for the future generation. Indian folk and tribal dances are simple dances, and are performed to express joy in every possible occasion, to celebrate the arrival of seasons, birth of a child, a wedding and festivals. Like Bhangra these dances have minimum of steps or movement. Men and women perform some dances exclusively, while in some perfomances men and women dance together. On most occasions, the dancers sing themselves, while being accompanied by artists on the instruments.

Each form of dance has a specific costume. Bhangra is a fusion of music, singing and the beat of the dhol drum. Bhangra has always been popular amongst Punjabi people all over the world. Its traditional sound is often been together with musical styles. The dancers wear different colors of clothes and daces among themselves. In present, bhangra has been fused with disce, techno, house, rap, ragga, and now jungle. These new styles have been so successful that modern bhangra is now being re-exported bace to India.

Altogether these forms of dances relate to harvest celebration, love, patriotism or current social issues. Many people do a lot of practice to master in these styles of dances. These dances are popular in India and most parts of the world and people are proud to perfom them. To make the past intact, these dances play a vital role in India. Many schools teach these dances in school to keep these dances through future. These dances bring unity among the people of India and tie them together to form a string of beads connected as people to have a country rich in dance called India. 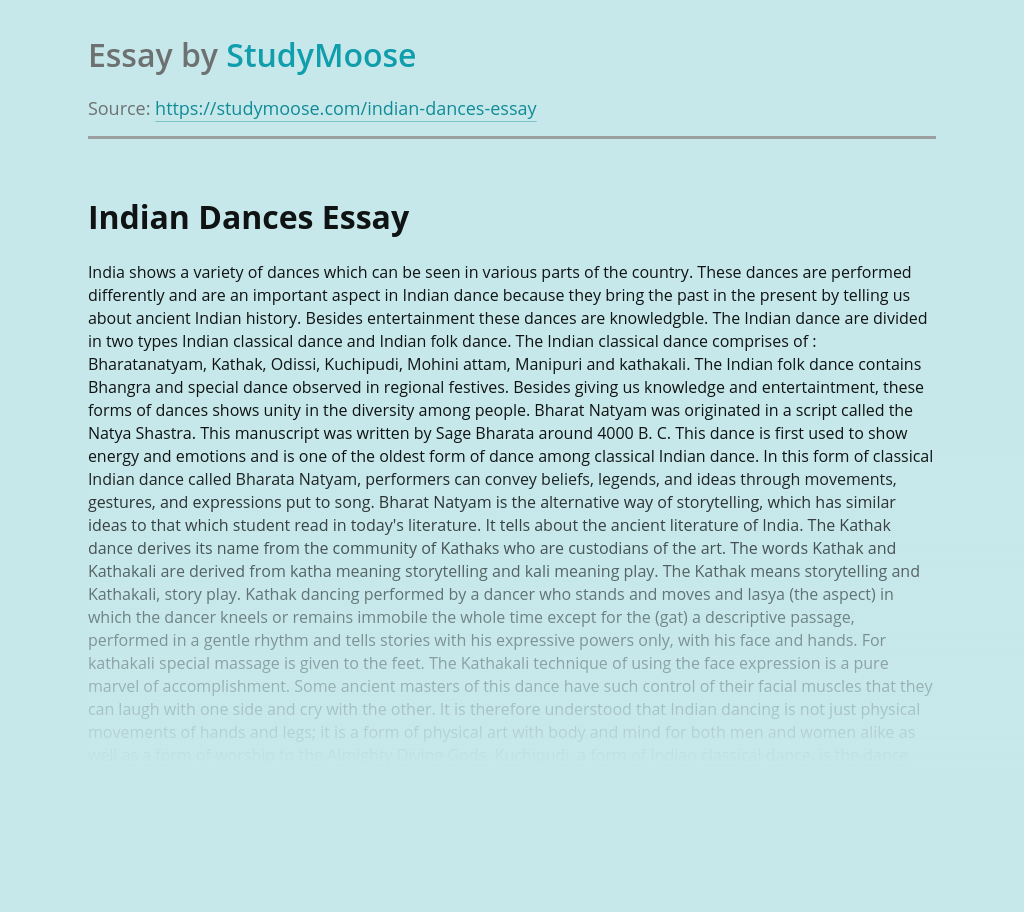 The main purpose for evaluating teaching performance and effectiveness is to ensure quality of education. The goal of the evaluation is to gain information for retention, promotion, and tenure decisions. Some universities publish evaluations of teachers conducted by students. Students may use this information in selecting course and degree programs. Therefore, instructors have a stake...

?Transcendentalism is a movement that started in New England in the early to mid nineteenth century. It was created as a protest against the general culture at the time, straying away from the mindless doctrines of the churches. I think that Thoreau, Emerson, Whitman, and Dickinson did a good job of explaining what Transcendentalism is...

Get Essay
The Important of Having Cell Phone

The working Mother vs the Stay at home mother

Becoming a mother is a life changing experience. Soon after having children, many women are faced with a very difficult question. Should I return to work, or become a stay at home mom? How does a woman choose between a career and family? Must the pros and cons be weight out? Everything has to be...

Abstract One of the most fundamental differential staining strategies used in the research study of bacteriology is gram staining. There are 2 primary types of germs, gram unfavorable and gram-positive. The function of this experiment was to perform a variety of tests to identify the germs contained in the unidentified sample identified number 15. The...