Everybody, XinNianKuaiLe. Maybe some of you guys already know what this Chinese mean. It is literally translated to the greeting “happy Chinese new year” in English. Today is the Chinese New Year (Yeh). Chinese New Year is the most important traditional holiday in China. Despite its winter occurrence, Chinese New Year is also known as Spring Festival in China. The festival begins on the first day of the first month, which is today, and ends on the 15th day of that month.

Don't use plagiarized sources.
Get Your Custom Essay on Informative Speech About China Just from $13,9/Page

As I had mentioned, Chinese New Year is the longest and most important festivity in the chinese Lunisolar Calendar.

Ancient Chinese New Year is a reflection on how the people behaved and what they believed in the most. In the celebration of the Chinese New Year, people will pour out their moneyh to buy presents, decoration, material, food, and clothing. It is also the tradition that every family cleans the house to sweep away any ill-fortune in hopes to make way for good incoming luck, they usually clean their house on the days before the New Year celebration.

There is a Cantonese saying “wash away the dirt on ninyabaat”. Ninyabaat means the 28th of month 12.

Brooms and dust pans are put away on the first day so that newly arrived good luck cannot be swept away. Some people even give their homes, doors and window-frames a new coat of red paint. Windows and doors will be decorated with red colour paper-cuts and couplets with popular themes of “happiness” and “wealth”. On the Eve of Chinese New Year, Chinese families gather together to have their annual reunion dinner. Food plays a major role in Chinese New Year celebrations. Families hand out oranges and grapefruits.

This kind of grapefruit signifies wealthy, because the Chinese word for grapefruits sounds like the word for “to Have”. Also the Cantonese word for lettuce sounds like rising fortune, so it is very common to serve a lettuce wrap filled with other lucky food. There are many other foods are served in the dinner, such as noodle. Noodles represent a long life, some people says that it is bad luck to cut them. Spring rolls symbolize wealthy because their shape is similar to gold bars. Fish also play a large role in the celebrations.

The word for fish, “Yu” sounds like the words both for and abundance. The fish is usually served whole, with head and tail, which mean having a good beginning and ending for the coming year. These round dumplings which is called JiaoZi signify family reunion. Its shape look like a bag the has many gold coins inside. This dish is called Lion’s Head Meatball. They are cooked with oversized meatballs and some vegetable soup. The lion represents power and strength in Chinese culture, while the oversized meatballs symbolize family reunion. Duck symbolizes fidelity in chinese culture.

Also, sweet and sour pork is popular with families hoping for a lot of grandchildren because the Cantonese word for “sour” sounds like the word for grandchild. Cakes have a special place in Chinese New year celebrations. Chinese people called them NianGow. NianGow is made up of rice flour, wheat starch, water and sugar. Their sweetness symbolizes a rich and sweet life. The family will then end the night with firecrackers. In the next morning, children will greet their parents by wishing them a healthy and happy new year, and receive red packets. 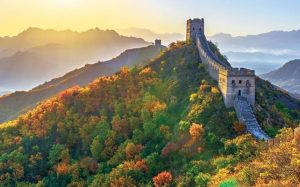 These red packets are envelopes that are passed out during the Chinese New year’s celebrations from married couples to unmarried teenagers and children. Red packets almost always contain money, usually from a couple of dollars to several hundred. The amount of money in each red packet should be even numbers, as odd numbers are associated with cash given during funerals. The number 8 is considered lucky. The number six is also very lucky as it sounds like “smooth” which represent having a smooth year. In addition, small gifts are also exchanged between friends or relatives during Chinese New Year.

Gifts are usually brought when visiting friends or relatives at their homes. Common gifts include fruits, cakes, chocolates and candies. As I had mentioned, children say greetings to the adults to request red packets. Here are some simple and meaningful greetings. Like the one that I had said in the very beginning of my speech, XinNianKuaiLe, which means Happy Chinese New Year. This one is pronounced as SuiSuipingan, which means everlasting peace year after year. Also, NianNianYouYu, The last character Yu refers to fish in Chinese. This greeting is a wish for surpluses and bountiful harvests every year.

Equality, Diversity and Inclusion in Work with Children

Should Sex Education Be Taught in School

Rate this post In society today, there are many controversial issues about whether sex education should be taught in school. Sex education are instructions on issues relating to human sexuality, including human sexual anatomy, sexual reproduction, sexual intercourse, reproductive health, emotional relations, reproductive rights and responsibilities, abstinence, birth control, and other aspects of human sexual...

Rate this post As early as Ancient Greeks distinguished between ‘superiors’ and ‘inferiors’ and the latter were regarded as slaves who were happy to work under the supervision and for the benefit of the former (1, 2005).             Still discrimination remains an issue of the day and gives rise to numerable disputes. Though terms have...

MY BAD EXPERIENCE IN MY LIFE