Great Britain is a country of customs and traditions. A lot of them have very long histories. Some of them are funny, some are strange. But they all are interesting and they are an essential part of the British way of life. There are fewer public holidays in Great Britain than in other European countries. They are the days when most of offices and shops are closed and people don’t need to go to work. In Scotland, England, Wales and Northern Ireland, public holidays are commonly referred to as bank holidays, and the two terms are often used interchangeably, although there is a difference.

Don't use plagiarized sources. Get your custom essay on
“ Public Holidays And Celebrations ”
Get custom paper
NEW! smart matching with writer

25 December is the date of Christmas Day. It is one of the most popular holidays in Great Britain. Christmas is a joyful religious holiday when Christians celebrate the birth of Jesus Christ. The day before Christmas, on 24 December (this is the date of Christmas Eve) offices and public buildings close at one o’clock, but the shops stay open late. Most big cities, especially London, are decorated with Christmas trees and colored lights across the streets. On this day people traditionally decorate their trees with fairy lights, angels and small toys.

On top of their trees they put a star. This star represents the star appeared over the stable in which Christ was born. They take down the decorations on Twelfth Night, which is on 5 January. Also everybody puts the presents under the Christmas tree. People say that at night Father Christmas puts presents into the stockings, which children usually hang on their beds. Besides, the Christmas food, nowadays usually turkey, is being prepared and stuffed on Christmas Eve. The chief Christmas tree is usually placed on Trafalgar Square, in front of the national Gallery, and it has become a tradition that the tree is a present from the people of Oslo.

Christmas Day is the favourite day for children. They wake up very early in the morning to find their stockings have been filled by Father Christmas and excitedly unwrap the presents before going down to breakfast. Family presents are opened either late morning or during the afternoon. The family gather together to open the presents found under the Christmas tree. Many Christians will go to church to sing carols and to celebrate the birth of Jesus on Christmas Day. More people attend the church on this day than any other day of the year.

People put on their best clothes to go to church. People celebrate Christmas Day with their families together. Relatives usually meet for the big dinner. Traditional Christmas food includes roast turkey with carrots, potatoes, peas, cranberry sauce, Brussels sprouts and gravy. After the turkey there is Christmas pudding. After the lunch they go to the sitting room to listen to the Christmas speech of the Queen, shown on TV. The Queen’s Christmas Message is a traditional feature of Christmas afternoon. At three o’clock in the afternoon, the Queen gives her Christmas Message to the nation which is broadcast on radio and television.

In Britain, Boxing Day is usually celebrated on the following day after Christmas Day, which is 26 December. This is the time to visit friends and relatives. It is typically a non-working day in the whole of Britain. When Boxing Day falls on a Saturday or Sunday, the following Monday is the public holiday. Traditionally, 26 December was the day to open the Christmas box to share the contents with the poor. The tradition of giving money to workers still continues today. It is customary for householders to give small gifts or monetary tips to regular visiting trades people (the milkman, dustman, coalman, paper boy etc.) and, in some work places, for employers to give a Christmas bonus to employees. Schools across the country gather together gifts to be put in Christmas Boxes that are sent to poorer countries.

New Year’s Day is the first day of the year according to the Gregorian Calendar. People celebrate the New Year on 1 January. It is not as popular as Christmas in England (some people even ignore it), but it is rather popular in Scotland. People welcome in the New Year on the night before. This is called New Year’s Eve. In Scotland, people celebrate it with a lively festival called Hogmanay. All over Britain there are parties, fireworks, singing and dancing, to ring out the old year and ring in the new. As the clock – Big Ben – strikes midnight, people link arms and sing a song called «Auld Lang Syne». It reminds them of their old and new friends.

Many churches hold a special service. This may be a communion service in the evening or a time of prayer during the day, especially around 3 o’clock as that is about the time of day when Jesus died. Churches are not decorated on Good Friday because this day is seen as a time of mourning. It is traditional to eat warm ‘hot cross buns’ on Good Friday. The pastry cross on top of the buns symbolizes and reminds Christians of the cross that Jesus was killed on. The buns were traditionally eaten at breakfast time, hot from the oven. It is also traditional to eat fish instead of meat on Good Friday.

Easter Monday occurs after Easter Sunday. This day commemorates Jesus Christ’s resurrection, according to Christian belief. For some people, however, it is just a welcome day off to enjoy the spring weather or work in the garden. In some places, there are egg rolling competitions, Easter bonnet parades, displays of traditional Morris dancing fairs or special sports matches on Easter Monday. Egg rolling is very popular in England and the rest of the UK. It is an Easter Monday sport. Hard-boiled eggs are rolled down a hill. Customs differ from place to place: the winner’s egg may be the one that rolls the farthest, survives the most rolls, or is rolled between two pegs. On Easter Monday a large hare pie is paraded in a procession through Hallaton Village from the Fox Inn to St. Michael’s Church.

The procession is led by a man wearing a green robe who carries a pole topped by a metal hare, and a woman in old fashioned costume carrying a basket of penny loaves. Two young women follow them, carrying a large hare pie, followed by three men in football shirts carrying three bottles above their heads, followed by a band with bagpipes and drums. At the gates of the parish church, slices are cut up, blessed by the rector and pieces thrown into the crowd. The procession then leads to the cross where the penny loaves are broken up and thrown into the crowd. The procession finally ends on a hill overlooking the village. There follows a football game, played across country with the bottles (barrels) instead of a ball.

The first day of May is known as May Day. It is the time when warmer weather begins and flowers and trees start to blossom. It is said to be a time of love and romance. It is when people celebrate the coming of summer with lots of different customs that are expressions of joy and hope after a long winter. May Day celebrations have their origins in the Roman festival of Flora, goddess of flowers, which marked the beginning of summer. On this day people decorate their houses with fresh-cut flowers. Traditional English May Day celebrations include Morris dancing, crowning a May Queen and dancing around a Maypole. Morris dancing is a traditional English form of folkdancing, performed by groups of men or women. The dancing is very lively and accompanied by an accordion player, a melodeon or fiddle player or a noisy band with a drum.

Morris dancers wear different clothes depending on the part of the country in which they dance. They are often dressed in white with coloured baldrics (coloured belts) across their chests. Maypole Dancing is a traditional May Day dance. On May Day, people used to cut down young trees and stick them in the ground in the village to mark the arrival of summer. People danced around the tree poles in celebration of the end of winter and the start of the fine weather that would allow planting to begin. Maypoles are still a part of some village life and on May Day the villagers dance around it. The headlight of the day is crowning a May Queen. A May Queen is the human replica of Flora. By tradition she takes no part in the games or dancing, but sits like a queen in a flower-decked chair to watch her ‘subjects’.

People celebrate Spring Bank Holiday on the last Monday of May. This day is called «Bank», because the banks as well as most of offices and shops are closed. You can eat English roast beef on the streets which are decorated with colourful garlands.

Summer Bank Holiday is celebrated on the last Monday in August or on the first Monday in September, depending on which of the Monday is nearer to September 1st. If the weather is fine, many families go for a picnic and enjoy their meal in the open. On Summer Bank Holiday most people tend to live cities and towns and go to the country. There is also much boating activity on the Thames, regattas at Henley and on other rivers. 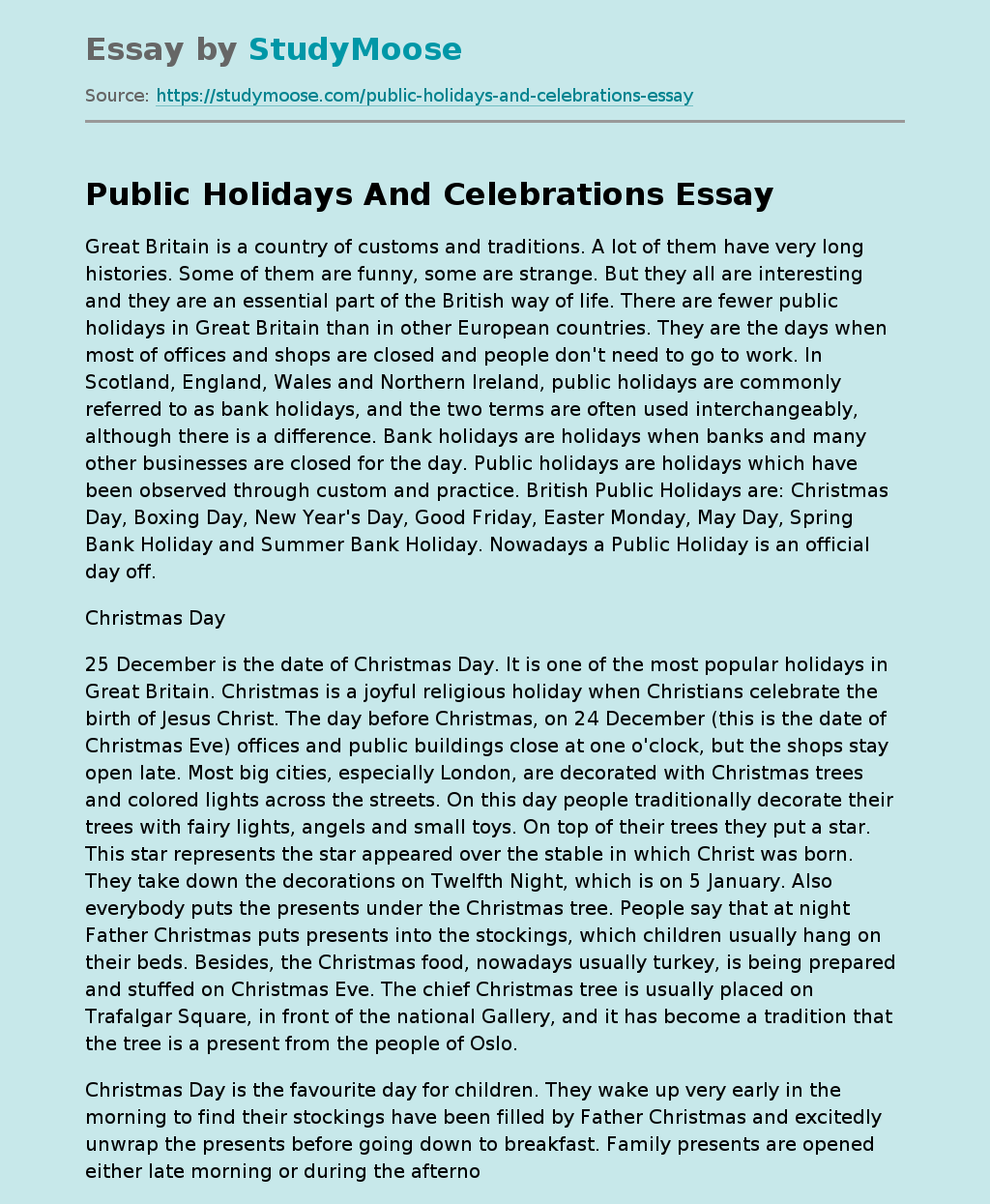