Pakistan’s independence day (also known as Yom-e-Istiqlal is observed on 14 August, the day before Pakistan was made an independent country based on border lines created by the British during the end of their rule of India. Pakistan became an independent country in 1947. The day is a national holiday in Pakistan. The day is celebrated all over the country with flag raising ceremonies, tributes to the national heroes and fireworks taking place in the capital, Islamabad.

The main celebrations takes place in Islamabad, where the President and Prime Minister raise the national flag at the Presidential and Parliament buildings and deliver speeches that are televised live.

Turn in your highest-quality paper
Get a qualified writer to help you with
“ Pakistan at 14 August ”
Get high-quality paper
NEW! AI matching with writer

In the speech, the leaders highlight the achievements of the government, goals set for the future and in the words of the father of the nation, Qud-e-Azam, bring “Unity, Faith and Discipline” to its people. [edit] History Main articles: History of Pakistan, Pakistan Movement, and Partition of India Independence of Pakistan was officially announced on Thursday, August 15, 1947 at 12:00 a.

m. ut the ceremony itself took place half an hour early on the actual day. [citation needed] This day is celebrated 1 day earlier in comparison to India even though the independence granted by the British Raj to both countries at midnight on 15 August 1947. [edit] Celebrations The Minar-e-Pakistan fully lit to commemorate the independence of Pakistan from the British Empire

The change of guard ceremony takes place at various monuments throughout the country. Here the Pakistan Navy cadets salute the tomb of the father of the nation, Mohammed Ali Jinnah Students lighting candles at midnight to bring luck and hope for the future.

4 August is a National holiday of Pakistan. In the capital Islamabad and in all major cities of Pakistan the Government Offices are lit up as well as all the larger skyscrapers. Flag hoisting ceremonies and cultural programs take place in all the provincial capitals. In the cities around the country the Flag Hoisting Ceremony is done by the Nazim (Mayor) belonging to that constituency. In various private organisations the Flag Hoisting Ceremony is carried out by a Senior officer of that organisation. Schools and colleges round the country organise flag hoisting ceremony and various cultural activities within their respective premises. Families and friends get together for lunch or dinner, or for an outing. Housing colonies, cultural centres, and societies hold entertainment programmes and competitions. Other events include: Changing of the guard at the mausoleum of Mohammed Ali Jinnah, Mazar-e-Quaid, Wagah Border ceremonies, fashion and musical concerts, both sides releasing prisoners that may have crossed each others borders. 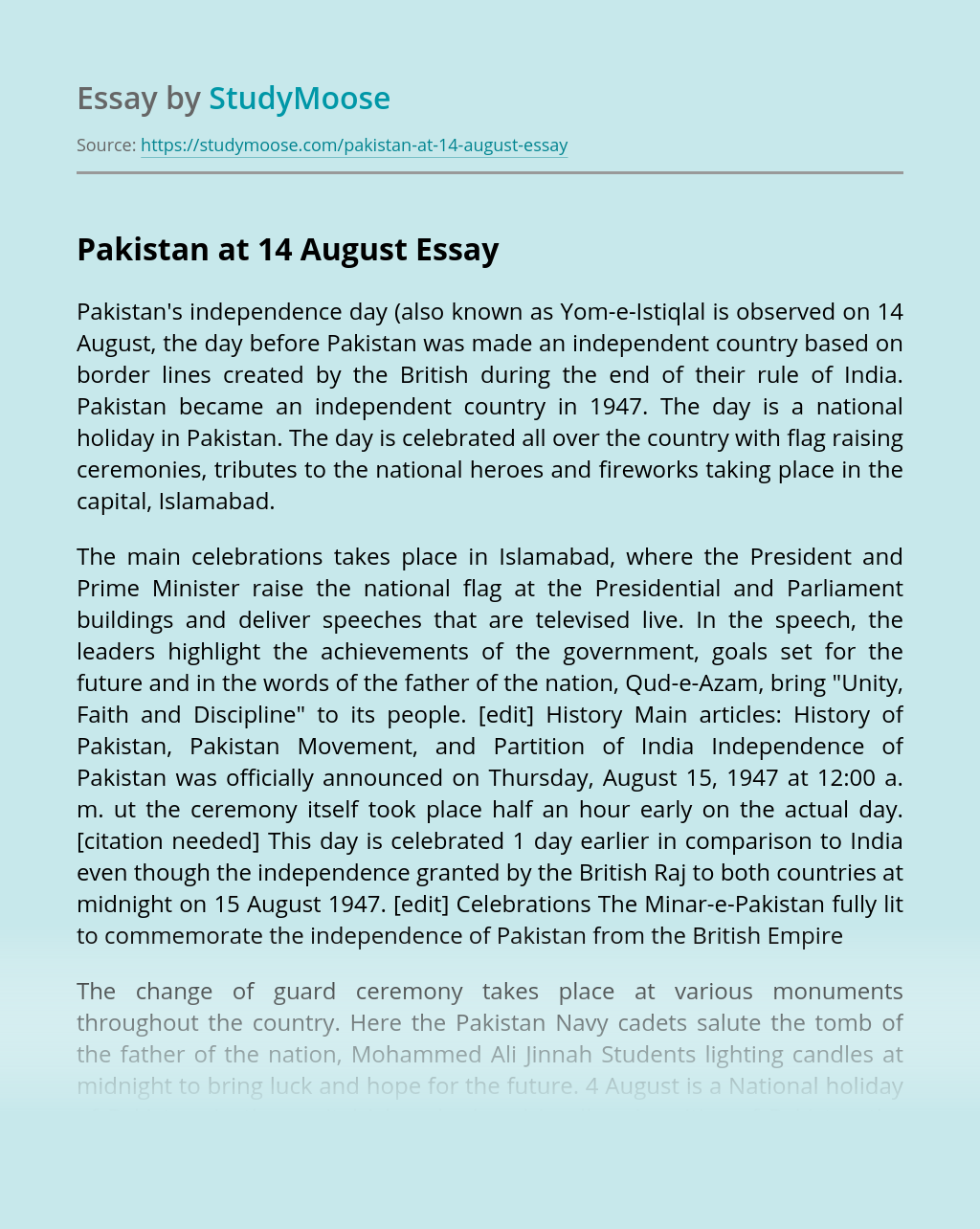 Turn in your highest-quality paper
Get a qualified writer to help you with
“ Pakistan at 14 August ”
Get high-quality paper
Helping students since 2015
Stay Safe, Stay Original