“Bastille Day, on the Fourteenth of July, is the French symbol of the end of the Monarchy and the beginning of the French Revolution” (www. hightowertrail. com). Bastille Day is a national, symbolic, historical French holiday and is celebrated every July 14. To celebrate Bastille Day, also known as La Fete de la Bastille, French citizens remember the storming of the Bastille which was the first major event of the French revolution. Bastille was not just a prison, it was a symbolic figure of the regime of absolute monarchy.

This is much like Independence Day in the United States because it is a holiday to start a new form of government. At one time in France, kings and queens ruled. Many people were very angry with the decisions made by the kings and queens. ” (Harris) France then under the rule of King Louis XVI and Queen Marie Antoinette, was an absolute monarchy. It wasn’t just the king and queen, who got to enjoy the royal desserts.

Rich people and others who the king and queen liked were invited to dinner at the royal table, or to stay in the royal residence. While all the mobs starved in the streets. King Louis XVI spent a lot of government’s money on luxury items, even when the government had some financial problems.

One of the main requirements of Government was to protect his country from war and control. In the Seven Years War against England, France spent large sums of money for the war, but they still lost the war and had to give up their colonies in North America.

Many French citizens considered this loss as a major humiliation. The country eventually went bankruptcy, the poor had little to no food and a growing middle class felt helpless about the future of their country. July 14, 1789 people banned together and broke into the Bastille prison, a symbol of a corrupt political system, from the revolution. For the peasant class, the Bastille stood as a symbol of hypocrisy and corruption of the aristocratic government – controlled most of the nobility and clergy. ” (infoplease. com) act was proof that power no longer resides in the king.

Capturing the Bastille, French citizens claimed that the king’s power was no longer absolute they stated that the government should be based on its people. Even if the Bastille prison only had seven prisoners at the time of its capture, the storming of the prison symbolizes freedom and the struggle gainst oppression. Bastille Day is important in France celebrating the birth of the French republic and the end of monarchy. There are many activities and traditions that are done on Bastille Day. Bal du 14 Juillet is a giant ballroom dance held at the Place de la Bastille, where once stood the Bastille. The ball is held on the eve of Bastille Day, chose a different theme each year to provide opportunities for elaborate costumes. Bastille Day begins with the Military-Bastille Day Parade, or defile Militaire-du-14 Juilllet.

The military parade was held on the morning of July 14, in Paris, since1880. Usually celebrated with fireworks, parades, dances, and holidays, and all the people regards day as a national holiday. Just as the people in the United States celebrate the signing of the Declaration of Independence as the beginning of the American Revolution, so the people in France celebrate the storming of the Bastille as the beginning of the French Revolution. Both Revolutions brought great changes. Kings and queens no longer rule. The people rule themselves and make their own decisions. 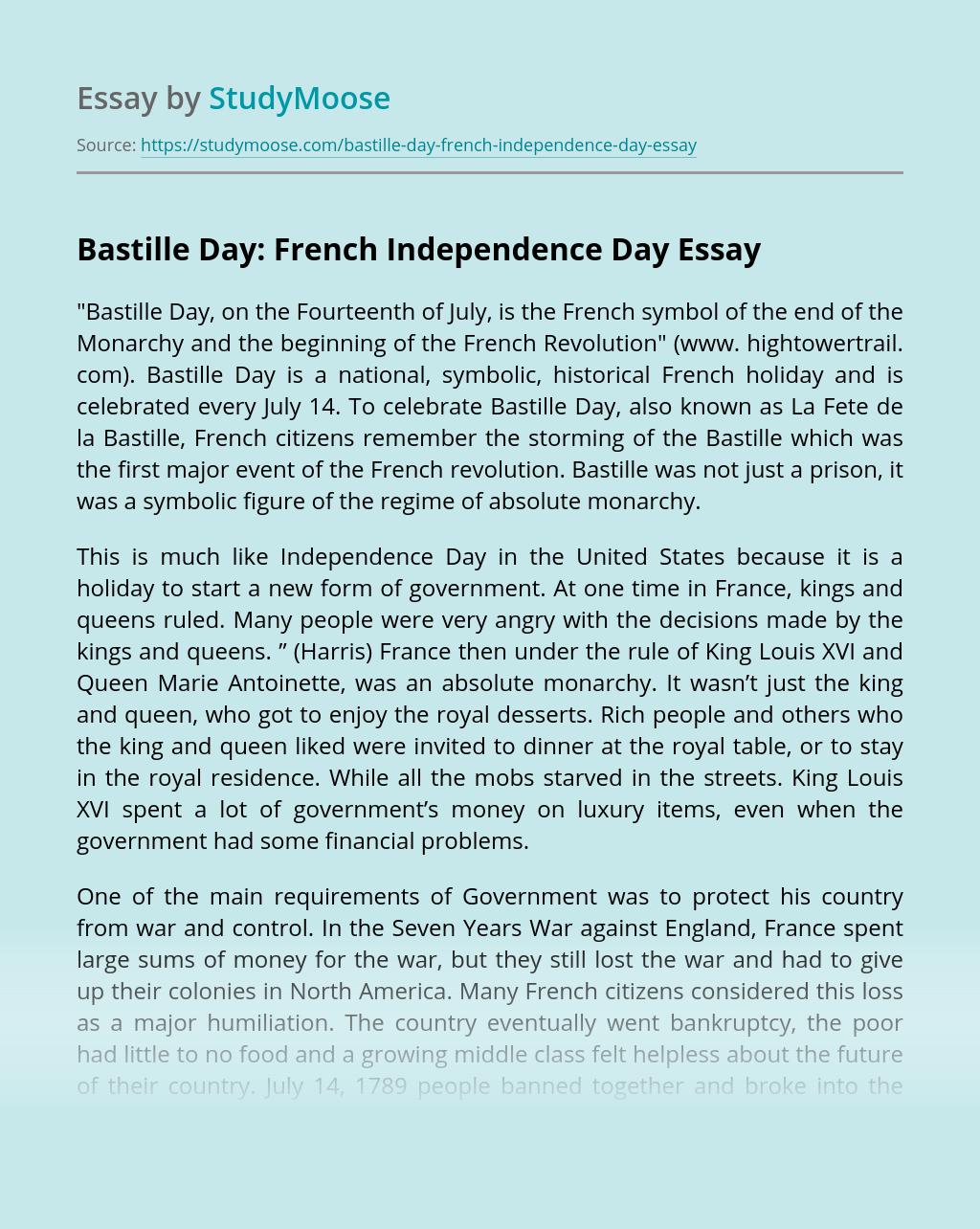