In 1967, Frank Dance proposed the communication model called Dance’s Helix Model for a better communication process. The name helical comes from “Helix” which means an object having a three-dimensional shape like that of a wire wound uniformly around a cylinder or cone. He shows communication as a dynamic and non-linear process.

Dance’s model emphasized the difficulties of communication. Frank Dance uses the form of a Helix to describe communication process. He developed this theory based on a simple helix which gets bigger and bigger as it moves or grows.

Turn in your highest-quality paper
Get a qualified writer to help you with
“ Dance Helicap ”
Get high-quality paper
NEW! AI matching with writers

The main characteristic of helical model of communication is that it is evolutionary.

Frank Dance explains the communication process based on this Helix structure and compares it with communication. In the Helix structure, the bottom or starting is very small then it’s gradually moves upward in a back and forth circular motion which form the bigger circle in the top and it’s still moves further. The whole process takes some time to reach.

As like helix, the communication process starts very slowly and defined small circle. Communicators share information only with small portion of themselves to their relationships. Its gradually develops into next level but which will take some time to reach and expanding its boundaries to the next level. Later the communicators commit more and share more portions themselves.

He learns to makes noises then he learns language to obtain attention and to fulfil his needs. As a Helix the process of communication in this case started from crying and later it developed into a complex and compound means.

The Helical model of communication is largely dependent on its past. A child learns to pronounce a word in his elementary classes and throughout his life he uses that word in the same way he learnt. Just like that we used to react to certain things in a certain way in our childhood and such reactions and habits lasts with us forever. The communication evolves in the beginning in some simple forms then the same process of communication develops based on the past activities. It develops further with modifications.

Frank Dance included the concept of time in his theory. Something happens over the other will always be based on the first event according to him. This theory of communication was a subject to a number of experimental researches. Even though this model of communication clarifies everything there is a problem of over simplification. According to this theory a communication process is the product of what we learnt.

Let us understand the model with the help of an example.

A child from the very moment he comes to this world starts communicating. When a baby is born, the nurse rubs his back to make the child cry. If the child doesn’t cry, it is an indication of a still born child.

What does crying in this case refer to? It is actually a way the child is communicating to his parents that he is alive, absolutely hale and hearty and ready to face the challenges of the world. As the child grows up, he cries whenever he is hungry or expects something from his parents and sometimes simply for his parent’s attention. It is again a child’s own way of conveying his message to the whole world. When the same child grows up and starts going to school, he soon interacts with his parents, teachers, friends in the form of words. Now crying actually gets replaced by words or his speech but one thing which is common is the process of communication which existed since the child’s birth.

Thus the child actually started communicating from the very first day of his life and has been communicating all through till the present day. This explains one part of helical model of communication.

According to the Helical model of communication, the process of communication evolves from the very birth of an individual and continues till the existing moment. All living entities start communicating from the very first day of their origin. When seeds are planted, they convey the message to the gardener that they need to be watered daily and should be treated well with fertilizers and manure. When a plant emerges from the seed it also starts communicating its need for water, sunlight, manure and fertilizers, thus supporting the Helical model of communication. The same also applies for animals, birds, fishes and all living creatures.

Now let us throw some more light on a real life situation An individual in his elementary classes learns to pronounce a particular word or react to a particular situation. It has been observed that even though the child grows up, he continues to pronounce that particular word in the same way as he did during his growing up days or for that matter, if the same situation arises again he would under all circumstances react in the same way as he did in the past. The fear of the child when suddenly the light goes off at night resulting in a complete blackout is present in his younger days as well as when he grows up.

The above example again makes the Helical model of communication clear. According to the Helical model as the process of communication moves forward it also comes back and is largely dependent on the past behaviour of the individual. The model believes that communication process is just like a helix which moves forward as well as comes backward and is dependent on the behaviour patterns of the past definitely with some modifications and changes. As the child grows up, he does make slight changes in his past body movements or past pronunciation or facial expressions. He makes certain changes, modifications in his communication and tries to get rid of the communication errors. An individual will definitely get less nervous in his teenage days as compared to his childhood days, thus a slight change in his behaviour. 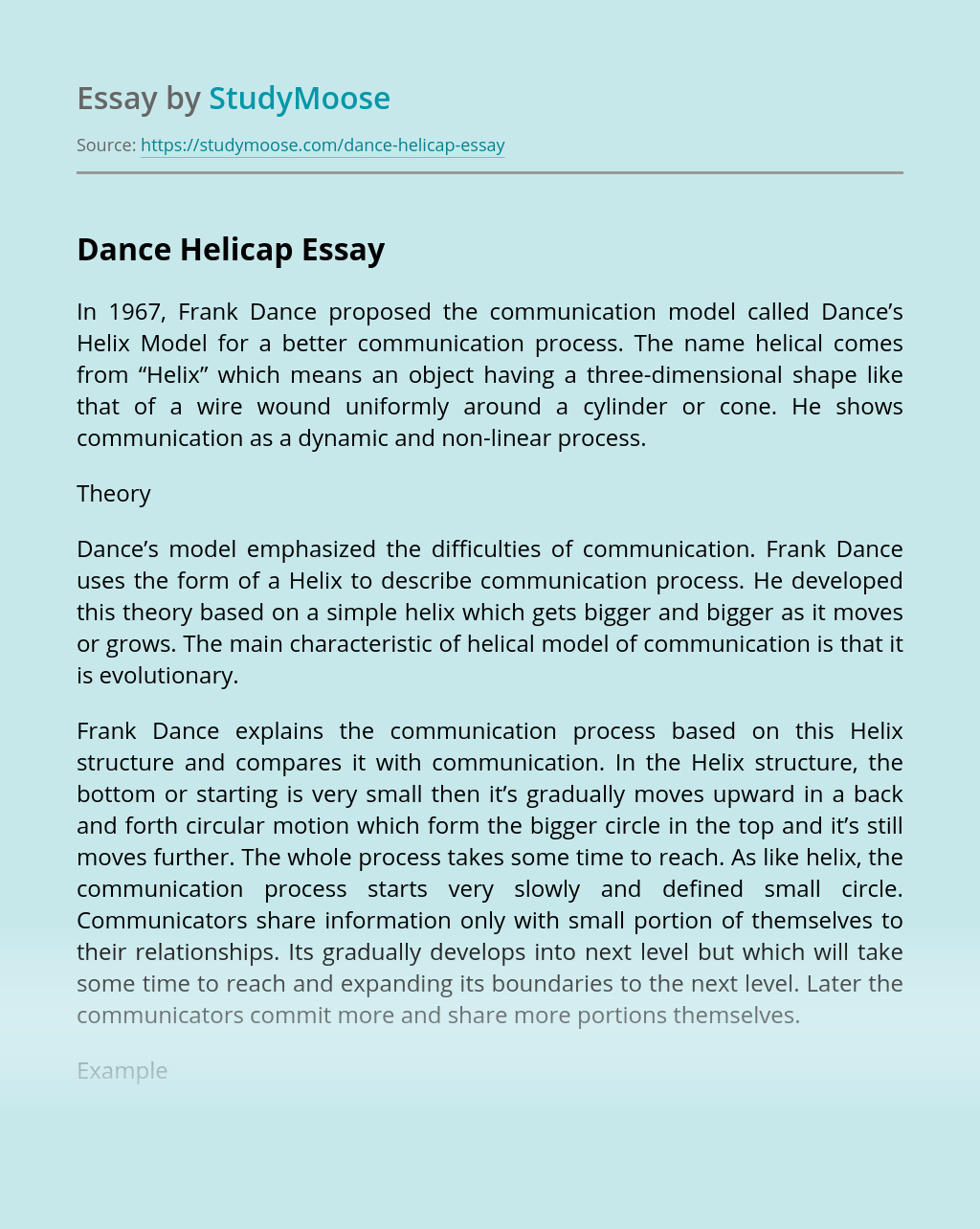 Turn in your highest-quality paper
Get a qualified writer to help you with
“ Dance Helicap ”
Get high-quality paper
Helping students since 2015
Stay Safe, Stay Original