Ghost dances was created in 1981. The performance was choreographed by Christopher Bruce. The piece explores the human rights of the people of chille and the depression that the lack of human rights caused. The inspiration of the dance came from a letter that Christopher received from a widow of a Chilean folk singer, who was murdered. Christopher felt sympathetic towards the letter, and after being asked to do a production for the Chilean Human Rights Committee, and was given a lot of South American music with which he fell in love with.

Turn in your highest-quality paper
Get a qualified writer to help you with
“ Ghost dances By Christopher Bruce ”
Get high-quality paper
NEW! AI matching with writers

The dance also explores the cross over from dying to either heaven or hell. It takes place in limbo where re-enactments of citizen’s lives are performed before crossing over. The dance uses traditional folk movement as well as other snippets of genres such as Contemporary and Ballet.

Throughout the performance lighting is used to accompany the movement to create certain atmospheres , for example in the beginning the three skeletal dancers are using quite strong eerie movement which represents the awakening of them, the lighting is a light blue which reflects against the backcloth and creates a moonlight which complements the movements.

In contrast to this, when the dead people enter the stage the lighting becomes less dark and gloomy and more uplifting and bright, which then allows the audience to differentiate between the characters, this is called semiotics. There are 3 different classes of people among the civilians, the upper class, middle class and lower class. You can establish this by the costumes they are wearing.

For example the upper class are wearing suits and fancy dresses whereas the lower class are wearing torn and damaged clothes, this shows social status even after death. The dynamic content of Ghost dances is very varied, some movements are soft and floaty such as the trio between the three female dancers, and others are more striking and large for example when the skeletal dancers take hold of the civilians and control them, this could represent the taking of their souls and the crossing over.

It also shows a disruption to their community and reflects the idea of murder and terrible things happening to the poorer, common people such as fathers taken away from their families and shot or thrown away in cells and tortured to death. When they all dance in unison it shows a community like culture and everyday life. When the community is first introduced they all enter in a dream like state as to show that they are quite oblivious for what is about to happen, this draws in the attention of the audience straight away. The fact that the dance ends in the repetition of this shows that they have all moved on and the skeletal dancers repeat the beginning phrase to show the ending of it all and the possibility of it to start over with a new lot of civilians.

To conclude Christopher used many aspects to put across his interpretation on the tragedies that were occurring in chille. One of the biggest was his use of movement and structure of the piece. The structure of the dance allowed the introduction of the different classes of people and the effect it had on them. The use of costume enabled the audience to see the full extent of the movement and the style of the dance. In my opinion I think the choreography led me to interpret the performance as a crossing over from one world to another and using the snippets of their lives to put across the horror and torture of the civilians. I found myself drawn into the performance and felt a connection to the meaning behind the movement. The structure and subject matter helped convey the meaning so that it was easy to follow but didn’t force me to interpret the dance in just one specific way, but allowed me to create a story and plot of my own. 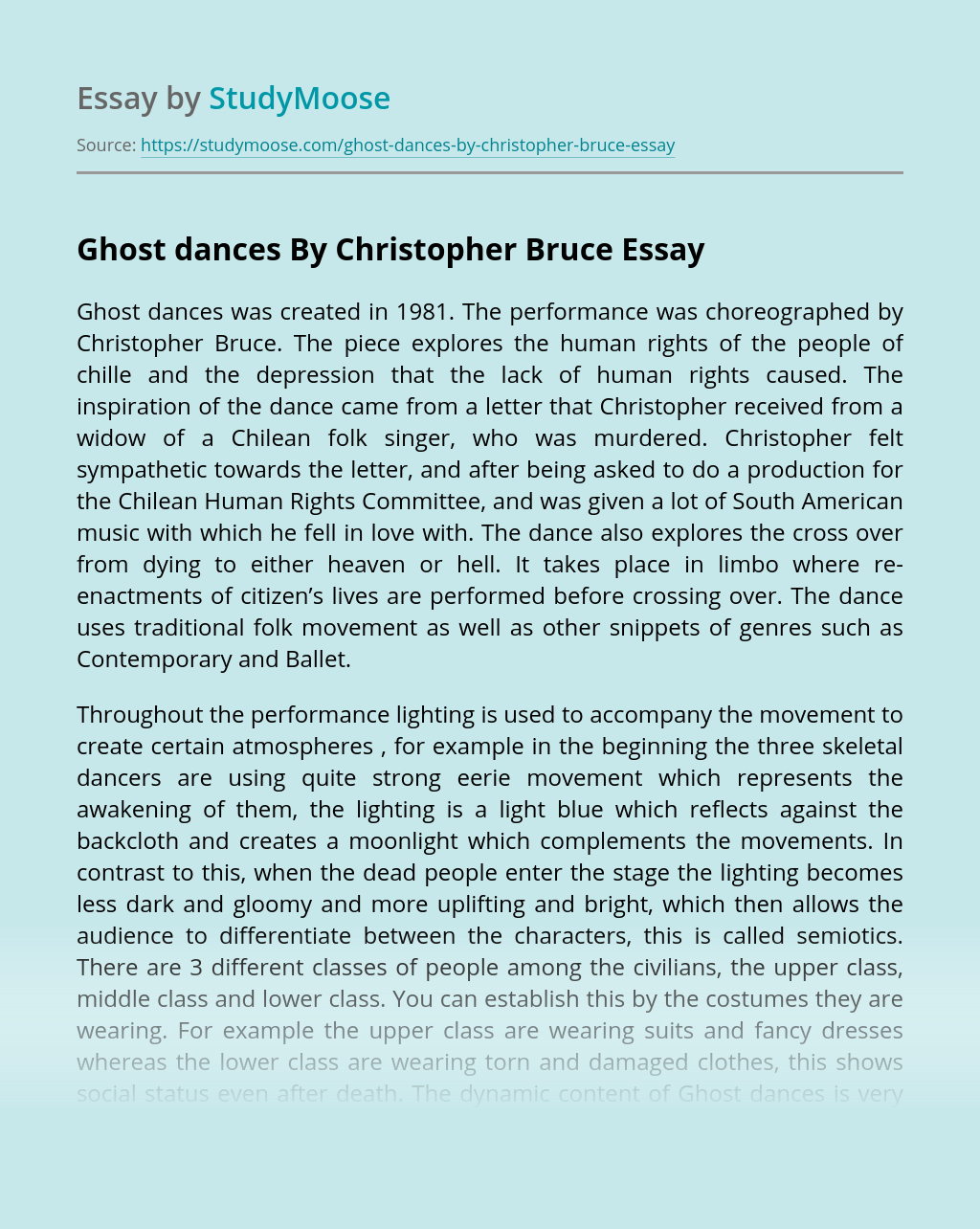 Turn in your highest-quality paper
Get a qualified writer to help you with
“ Ghost dances By Christopher Bruce ”
Get high-quality paper
Helping students since 2015
Stay Safe, Stay Original