Bruce Dawe's "Enter Without So Much As Knocking"

“Remember, man, thou art but dust, and unto dust though shalt return.” This is a translation of the quotation which begins Dawe’s poem, Enter Without So Much As Knocking. The quote reminds us that life is not forever; and that we are all faced with mortality.

Main Idea of the Poem

The poem itself is discussing a man’s journey from birth to death and how all around him life is interpreted by material possessions. At the beginning of the first stanza, the sentences have been made very short and simple, as if to demonstrate the thoughts of a new born child.

Don't use plagiarized sources. Get your custom essay on
“ Bruce Dawe’s “Enter Without So Much As Knocking” ”
Get custom paper
NEW! smart matching with writer

The ellipsis that connects the first and second stanzas demonstrates a change in time, in this case, a change of a couple of years.

The words used in the second stanza, such as “well-equipped” and “economy-size”, are words that were constantly used in commercials at the time, as if life was being sold to the child. This use of a commercial like structure is also evident in the way that the family is depicted, each with its own stereotype: an “Economy Sized Mum”, a sexist description typical to the 50s; an “Anthony Squires — Coolstream — Summerweight Dad”, Anthony Squires referring to an Australian brand of suit; and “two other kids straight off the Junior Department Rack”, referring to the baby’s siblings, each free of gender and age and recognised only by the type of clothing that they wear.

From these two stanzas, Dawe is able to create not only a vivid image of the typical family in the 1950s, but also give us an insight to the TV culture that they are living and what effect it has on the family.

The thirds stanza discusses what happens when the Mum character wins the Luck’s-A-Fortch Tricky-Tune Quiz. She takes the boy shopping. They set off in the “good-as-new station-wagon”, yet more advertising jargon which describes the family’s second-hand car. The short phrases that follow are describing a child’s view of a road trip and the many rules that come with it. The statements begin as typical road warnings “WALK. DON’T WALK.” and become more satirical as they continue, for example “NO BREATHING EXCEPT BY ORDER”. These phrases represent the signs that a child may recognise on a trip. After these, there are the sounds that are present on a car trip, as well as the sound of Mum complaining.

Meaning of the Second Half of the Poem

The numerous “beeps” that are present may represent both the beeping of a car horn as well as censorship of swear words, a likely situation especially in the last capitalised beep. This situation creates an image or a race to get somewhere. It could be seen as Dawe’s expression of likening a traffic jam in the hurry to get to somewhere to the race of people to get to a certain place in their career or in their life. This entire stanza dictates fast and hectic circumstances, which change suddenly when arriving at the fourth stanza.

The first word in the fourth stanza, however, followed by a comma, immediately slows the reader down by forcing them to pause. The stanza goes on to tell of how although the boy is surrounded by so much commercialism and fast-paced life, such as the fifty-foot screen and the giant faces projected onto it, he is able to enjoy a natural wonder of the world, the stars. It is here that there is the first mention of the boy’s emotions, where Dawe writes of the boy enjoying something.

When describing the way the starts are sprinkled over the sky, Dawe has used the word littered, which usually has negative connotations. This could be because the stars had not yet been changed by our world, and if they were left as they were, untouched, they were not as good as what we had created on our Earth. The stanza ends on a slightly low note because of Dawe’s metaphor of the stars being like “kids at the circus” Dawe is trying to show how the stars are close enough to the Earth for the boy to reach, and therefore, for the boy to get “kicked”, or hurt.

As in the beginning of the fourth stanza, the first word of the stanza brings the reader back to a different part of the boy’s life and a different event. This new event shows the character as no longer a boy, representing innocence, but in the company of “godless money-hungry back-stabbing miserable so-and-sos”. We can tell from this that Dawe is trying to show that the boy has now grown up and has been introduced to the “real world” and is now already a middle-aged man. The phrase “goodbye stars” relates back to the fourth stanza. He must also farewell the “soft cry in the corner”; a farewell to any emotions. It is at this point that Dawe includes the adult voice of the boy.

The character speaks the need to care for yourself first and foremost, no need to think about the effect it may have on others, shown in the statement “hit wherever you see a head and kick whoever’s down”. This harsh change from innocent boy to selfish man is how Dawe is creating the character. The adult man is shaped by his dialogue in the poem. The character has grown up and no longer discusses his family, yet no mention of a wife or children is present until the next stanza, and then only to criticize. This fifth stanza is the first one to portray him as an adult, and Dawe has managed to make the character seem harsh and unkind.

End of the Poem and Conclusion

The sixth stanza introduces Alice, most probably the characters wife. The character also criticizes Clare Jessup, indicating his hypocritical nature. The sixth stanza is very short, as it seems as though it was cut short because of what happened next. Obviously the car is involved in an accident, shown by the last two words of the stanza “watch it” followed by a dash, leaving the reader to imagine the incident. The dash that ends the stanza shows how short the moment between life and death is, and how it happens in the blink of an eye. Until this point, Dawe has been able to create the entire persona of the character, starting from birth and ending at death. Dawe is able to show how through different events a person is moulded into the character which they become.

As the character has died, the narrator returns once more to an outsider, and observer. The reaction to those who possibly attend his funeral where they see his body, is strangely surreal; as they focus not on his life and personality, but on what a good job the morticians did on giving him a fake tan. The idea here is that he’s dead, but at least he looks good. The line ” the old automatic smile with nothing behind it” describes how much of a disguise he had created for himself. No-one knew him for who he was because he had spent so long trying to conform to society and kill his individualism. The last few lines of the poem relate back to his life. “winding the whole show up” refers to the man’s life as if it were a television show, now finished, as well as the ending of the poem. The end of the poem also states what the man has left, the parking tickets, taximeters and Bobby Dazzlers.

These are all material things. There is no mention of any loved one, such as his wife; or the rest of his family that are spoken about earlier in the poem. Instead, there is talk of him leaving the “grieving over halitosis, flat feet, shrinking gums and falling hair”. The term grieving is usually used to describe the process after someone has passed on, yet in this case is used to show worry over such trivial matters. The second last line in the poem, “six feet down nobody interested” shows how society regards the dead: he doesn’t affect people anymore, so nobody cares. The last line links back to the first. “Blink, blink. CEMETERY. Silence”. Just like he came into this life, the man blinks into death and into silence, an ending.

Bruce Dawe's "Enter Without So Much As Knocking". (2016, Jul 04). Retrieved from http://studymoose.com/bruce-dawes-enter-without-so-much-as-knocking-essay 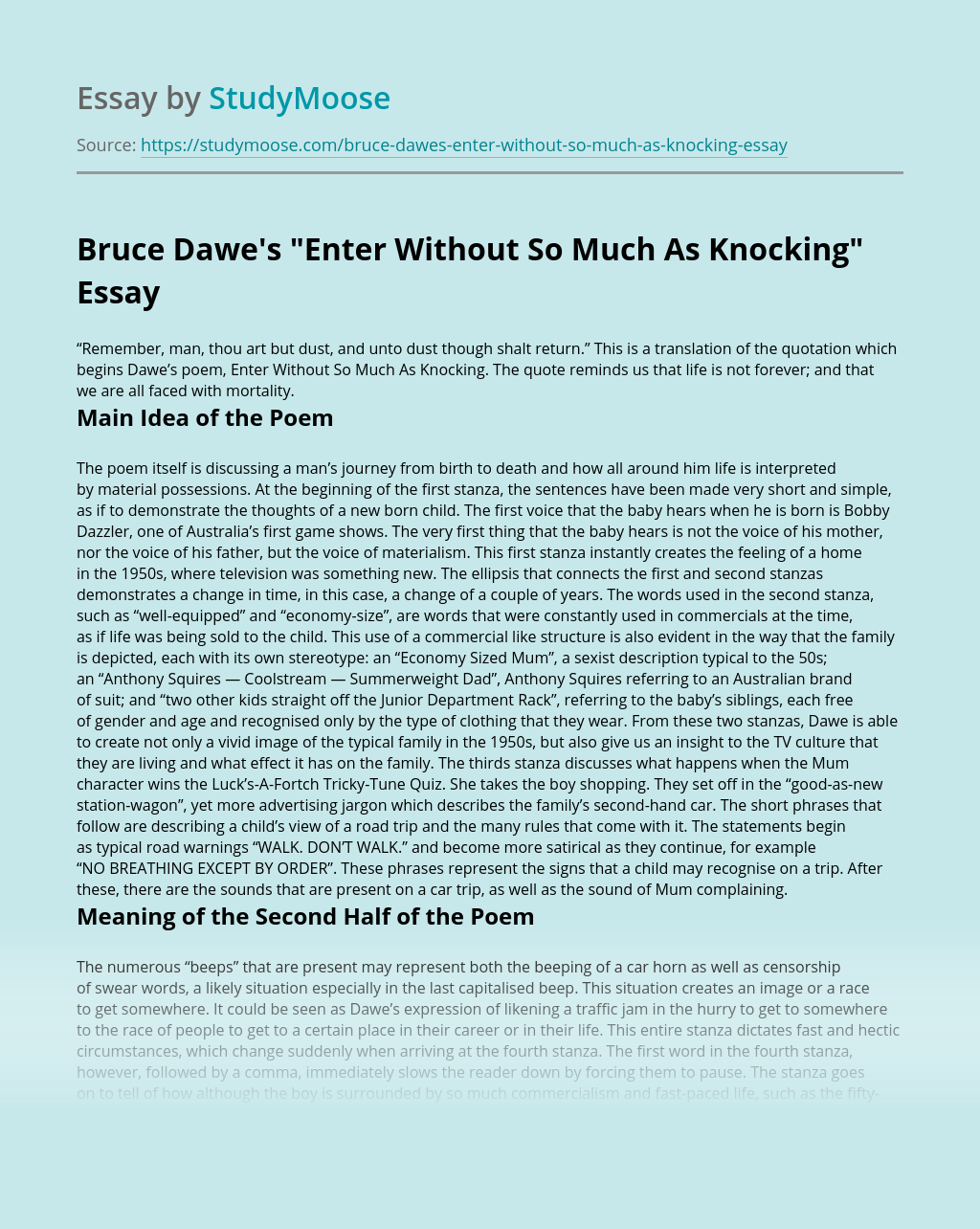