Analysis of Bruce Dawe and his Poetry

Bruce Dawe is one of the most inspirational and truthful poets of our time. Born in 1930, in Geelong, most of Dawe’s poetry concerns the common person. His poems are a recollection on the world and issues around him. The statement ‘The poet’s role is to challenge the world they see around them’ is very true for Bruce Dawe, as his main purpose in his poetry was to depict the unspoken social issues concerning the common Australian suburban resident. His genuine concern for these issues is obvious through his mocking approach to the issues he presents in his poems.

‘Drifters’ is about a family who move from place to place, as the father needs to move by the demand of his job. Dawe wrote this poem in a very casual language; however, if you read it carefully you would be able to see the seriousness of what he is saying. The young children are growing up to learn no other way of life except the life of continuously moving, as they are all waiting for the day they shall move again.

The children get very excited about moving from place to place ‘and the kids will yell truly’. The eldest is becoming aware that their roaming lives may never change ‘the oldest girl is close to tears because she was happy here’. She is becoming frustrated with her life. Dawe shows pity for the wife, as she has to gone through this so many more times before ‘she won’t even ask why they’re leaving this time’.

Dawe writes sympathetically about the wife, like when she asks her husband Tom to make a wish in the last line of the poem ‘Make a wish, Tom, make a wish’. Because this is a continuous event, the wife is getting frustrated, as at the time of packing once again she finds that she has not unpacked from there last move.

Even though this poem is written in a happy tone Dawe is being serious about the issue of how a family gets upset about being stuck in a life that is continuously moving around and not being permanently settled anywhere.

‘Homecoming’ was written in 1968 during the Vietnam War with the intent of making its audience aware of the senselessness and tragedy of war. The poem deals with the numerous stages of bringing the dead home for there ‘homecoming’, a supposedly joyous occasion worthy of great celebration. The title serves as a constant reminder of what may have been. Rather than coming home celebrating their Heroic survival, they are being bought home dead.

‘They’re bringing them in, piled on the hulls of Grants, in trucks, in convoys;

they’re zipping them up in plastic bags’.

Dawe uses a number of clever poetic techniques in order to express his feelings towards war. The repeated use of ‘they’ and ‘they’re’ in the first section hints at the impersonal relationship between the bodies and their handlers. Dawe shows his audience how this is the harsh reality of war, if people allowed the usual human compassion to overcome them every time they saw yet another dead body, it would be too unbearable.

Rhythm is also used a great deal in the first section, making it sound almost chant-like through the use of pauses that form a direct beat. This rhythm suggests a slow, mechanical process, almost like an assembly line.

Interestingly, Dawe goes against conventional methods of breaking his poem up into different stanzas. Despite this, it is evident that the poem exists in three main sections – the gathering of bodies in the jungles of Saigon, the flight back to Australian for the dead soldiers, and finally the bodies returning home.

Words like ‘noble’, ‘whine’ and ‘sorrowful’ are used to express the sorrow and regret that Australian’s will feel as their dead youths are bought home. Through the use of the personification of the planes, Dawe voices the sadness and futility of the situation, ‘tracing the blue curve of the Pacific with sorrowful quick fingers’.

The tone changes, and the lines echo the feeling of homesick Australian soldiers. As the planes approach Australia ‘the coasts swing upward’ to meet the planes. This is the coastline that would have been so familiar to the soldiers had they been coming home alive, yet now they don’t have the opportunity to see the ‘knuckled hills, the mangrove-swamps, the desert emptiness’, an environment vastly different from the jungle they had fought so valiantly in.

‘A Victorian hangman tells his love’ is about a man who enjoys what his job consists of. His job consists of hanging criminals as a punishment for the crimes they have committed. Bruce Dawe writes this poem from the hang mans perspective, it tells the audience how he feels about execution. Dawe explains that the hangman is ashamed to wear his hangman clothes in front of his wife. ‘Two piece tracksuit, welder’s goggles and a green cloth cap like some gross bee- this is the states idea…’. He thinks of a hanging as a nuptial, and by reading these lines you can tell how special hangings are to him. The tone is of this poem is ashamed and proud, the hangman is ashamed because of the cheap clothes he has to wear when it is so special to him and proud because -=—— Dawe writes about the hangings as if they are a ritual, ‘This noose with which we’re wed is something of an heirloom’, the hangman feels as if the hanging gives them some kind of special connection.

The human condition is explained throughout this poem, the way people feel towards these hangings and the way the hangman feels about these hangings. This was the last hanging to take place in Australia, it was very controversial and Dawe writes about it as if the hangman is very upset, as this will be his final hanging. It is very Australian in setting as it is a defining moment in our history as Australia. It was the last life taken for capital punishment in Australia. Dawe writes this poem in a controversial way as it describes how the hangman enjoys ‘ hitting the door lever, you will go forth into a new life’ this hangman thinks that he is doing these men a favor by taking their lives.

‘On the Death of Ronald Ryan’ is about a man who is going to be executed for a crime he supposedly committed. Dawe writes this poem in Ronald Ryan’s wife’s or lover perspective. The reader can feel her sadness towards Ronald’s execution, and her respect for him dying ‘most horrifyingly like a man’. The human condition is undeniably Australian as there is the sign of a true fighter ‘annealed un-tranquilized, scorning a final statement’. Dawe writes of the wife as if she wished Ronald died ‘with far more dignity than the shabby ritual which gave you credit for’.

Analysis of Bruce Dawe and his Poetry. (2016, Jul 21). Retrieved from http://studymoose.com/analysis-of-bruce-dawe-and-his-poetry-essay 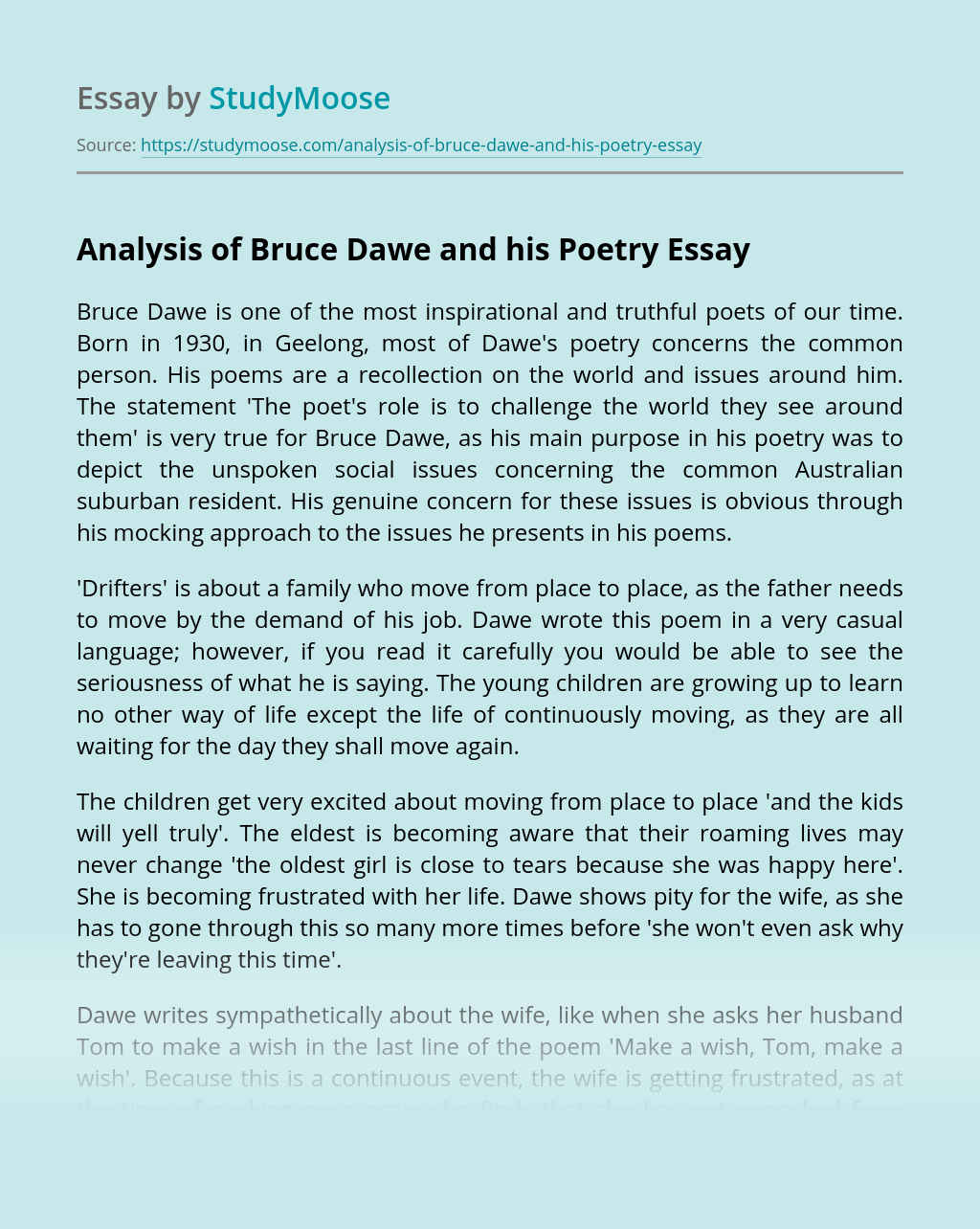 Don’t waste time
Get a verified writer to help you with Analysis of Bruce Dawe and his Poetry
Hire verified writer
$35.80 for a 2-page paper
Stay Safe, Stay Original