Louis XIV strove vigorously for supremacy in foreign affairs. He was to use his foreign policy to establish a universal monarchy for himself or alternatively to use it to secure natural frontiers for France thus improving its defenses. He worked successfully to create an absolutist and centralized state. During his reign Louis was involved in four major wars, some of which Louis may be accountable as the provocateur; however, I believe that mainly his motives were purely defensive. The war of Devolution served as a pretext which nettled him part of Flanders, although the Dutch then moved against him with the Triple Alliance.

Don't use plagiarized sources. Get your custom essay on
“ Louis XIV: his domestic and foreign policies ”
Get custom paper
NEW! smart matching with writer

Louis was determined to crush Holland and this began the third of the Dutch wars, which depleted his treasury. Louis proved an incredibly extravagant spender, dispensing huge sums of money to finance the royal court. The following ten years the king limited his policies to diplomacy. Louis continued the nobility’s exemption from taxes but forced its member into financial dependence to the crown and the provincial nobles also lost political power.

Louis does have a genuine concern for his country and despite his dubious methods he does manage to secure the territories that he wishes to secure. He curtailed local authorities and created specialized ministries. Louis’s grandson retained the Spanish throne but the war of Spanish Succession left France in great debt and a weakened military. Louis used the bourgeoisie to build his centralized bureaucracy. He illustrated new administrative methods to make him more in control.

Louis’s general Colbert worked to improve the French economy. Colbert worked to create a favorable balance of trade and increase France’s colonial holdings. He achieved a reputation for his work of improving the state of French manufacturing and bringing the economy back from the brink of bankruptcy.

He reduced the national debt through more efficient taxation. His principal taxation devices included the aides, the douanes, the gabelle, and the taille. Louis spent so much money on luxury and wars; France actually became increasingly impoverished. The aggressive and opportunistic implementation of Louis’s policies understandably persuaded those threatened by it that the king’s intention was expansionist and his intentions unlimited. There had been acts of gratuitous violence as well which underlined the arrogance and ruthlessness of French conduct. In conclusion it seems that by the end of his reign the wars had placed him in a strong and secure position in Europe yet his intention was not entirely for glory. 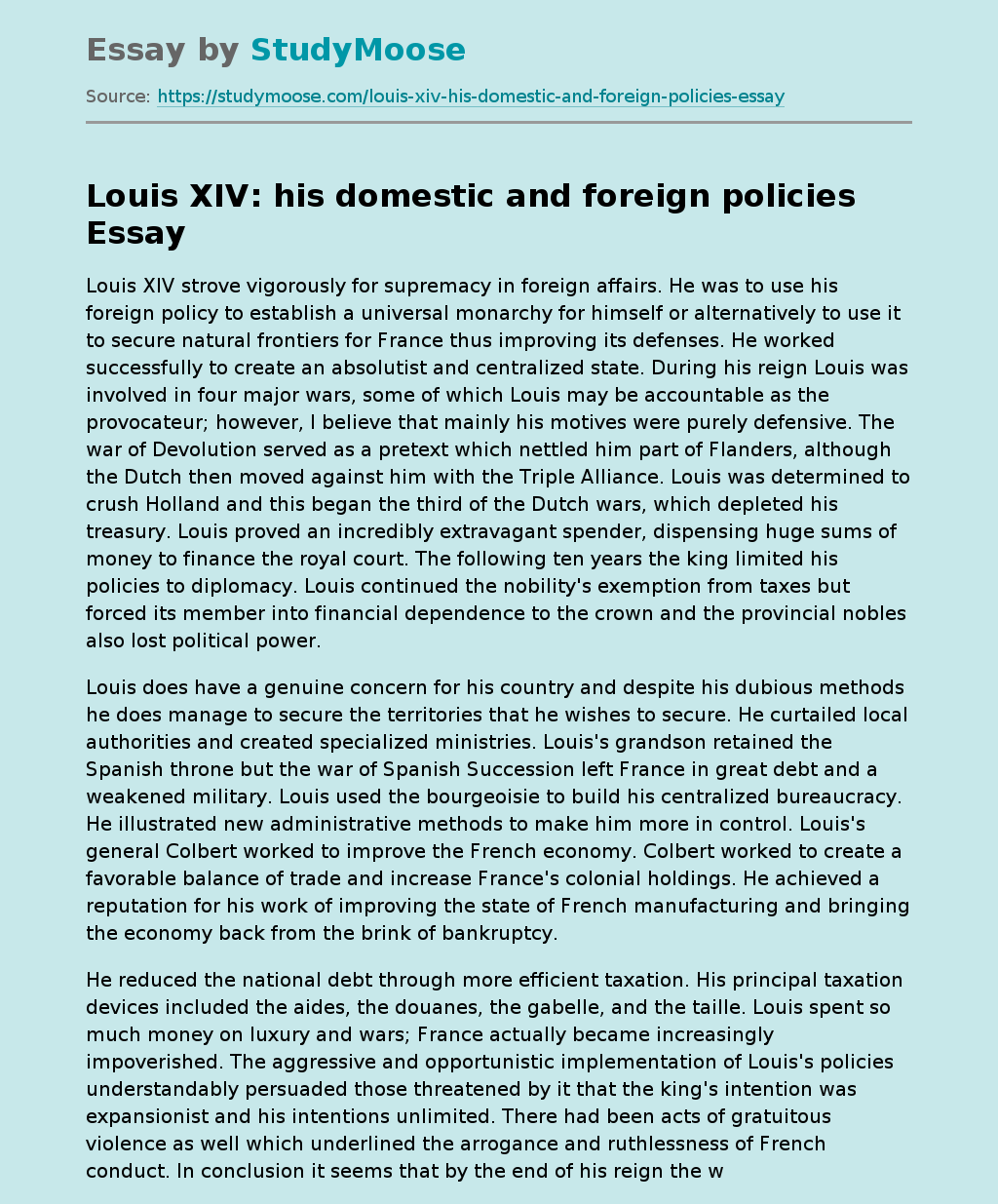