Prior to the ruling of Emperor Ashoka, kings, emperors, and rulers were rarely thought to be representations of God. Ashoka was the ruler of the Mauryan Empire which stood in India from 273 BCE to 232 BCE. The Mauryan Empire included most of India’s grounds as well as what is now known today as Bangladesh and Pakistan. Once conquering Kalinga, Asoka sought to find a Guru, seeking enlightenment. After sitting beneath the Bodhi tree, Asoka became a more fulfilling leader. Throughout Asoka’s life, he had proven himself to be an enlightened ruler by seeking Buddha, creating the Asokan edicts, and acting out on his best interests for his people.

Don't use plagiarized sources. Get your custom essay on
“ Asoka: Ruthless Conqueror or Enlightened Ruler ”
Get custom paper
NEW! smart matching with writer

Asoka quickly became converted to Buddhism as a result of the Kalinga war. At the conclusion of the war, Asoka sought a Guru due to feeling a great crisis (document C) along with a stirring remorse for his prior actions. He was now setting high ideals for himself, the ideals of power and peace.

Once under the Bodhi tree, Asoka gave rich gifts to the poor. Asoka also consulted with local communities about proper governance about good conduct (also document C). By seeking Buddha, Asoka proved his underlying remorse for the war and with his growing understanding, he was able to begin reforming his mind as a political order. Asoka wished to make up for his mistakes with the Kalinga war, therefore reversing his viewpoints and moving forward (document C).

The people of the frontier were generally too weak to consider a war against him.” Asoka recognized this and created a series of edicts. Document C was written by historian Michael Wood. Due to the source being a historian, his point of view comes from another persons views, these views being that Asoka was an enlightened ruler because, “Asoka gave rich gifts to the poor.”

With Asoka’s growing desire for political order, the 33 edicts were created. The edicts were engraved on pillars (pillar edicts) and on walls or boulders (rock edicts). Asoka made each of the edicts focus on different aspects most important to the people of India, or what should have been most important in Asoka’s opinion. The edicts explained his political aspirations for his empire, urging others to follow his enlightening example. The map in document D shows that the edicts were scattered throughout India, appearing on dozens of pillars, walls, and/or boulders throughout India, Nepal, and Pakistan (document D). Asoka’s purpose was to constantly have the laws announced or presented to the people. Document D easily proves that Asoka takes the level of the commitment to his laws extremely seriously and wants what is best for the people because the laws included edicts concerned with health and the environment, faiths and honors, and promoted welfare, etc.

Asoka’s edicts expressed his vows to care for his people such as Rock Edict VI, vowing, “… I consider that I must promote the welfare of the whole world… indeed there is no better work than promoting the welfare of the whole world. And whatever may be my great deeds, I have done them in order to discharge my debt to all beings.” (document D). Document D is a phenomenal source because it is Asoka’s point of view. With the words of Asoka’s edicts, we can see his true nature and expectations. From the edicts, Asoka comes off as genuine, caring, thoughtful, and a hard worker for his people.

An excerpt from the edicts of Asoka states, “…, it would weigh heavily on the mind of the Beloved of the Gods [Asoka].” (document E). The edicts are Asoka’s messages that have traveled far and wide with Asoka being loved by the Gods. Asoka was instilling this into the minds of the people of his empire but Asoka was confident enough to hold himself to high standards and was well prepared to take on the responsibilities of being a God-like-figure to the people. Document E also states that, “The Beloved of the Gods believes that one who does wrong should be forgiven as far as it is possible to forgive him.” This made Asoka feel as though the war he created was acceptable because he believes everyone should find it possible to forgive him as he sought Buddha and perched beneath the Bodhi tree.

As a result of the Kalinga war, Asoka was converted to Buddhism. Throughout his ruling of the Mauryan Empire, Asoka set extremely high ideals for himself, the ideals of power and authority balanced with peace. With the creation of his 33 edicts, he taught people to live, emphasized compassion towards animals and nature, and spread teachings to strengthen family ties along with the existing social classes (document F). After the war concluded, Asoka spent much of his time trying to make-up for his “mistakes” of the Kalinga war. In his edicts, Asoka vows to care for his people (document D). “Asoka’s pillars of stone containing the inscriptions speak magnificent words…” (document F). Asoka also devoted himself to spread the teachings of Buddha to the people after discovering the enlightenment Buddha’s teachings had given him.

All of the documents together shape Asoka to be a very enlightened ruler. He always put the best interest of the people first and wished to educate them on the peace-seeking of Buddha. In order to better understand Asoka’s true personality, characteristics, humane and nature, it would be of great convenience to be provided with an additional document from a civilian whom lived during the time of Asoka’s ruling and walking past the edicts everyday. It would be very insightful to get into their thoughts and grasp their beliefs and their gained knowledge provided by the edicts.

Asoka: Ruthless Conqueror or Enlightened Ruler. (2016, May 30). Retrieved from https://studymoose.com/asoka-ruthless-conqueror-or-enlightened-ruler-essay 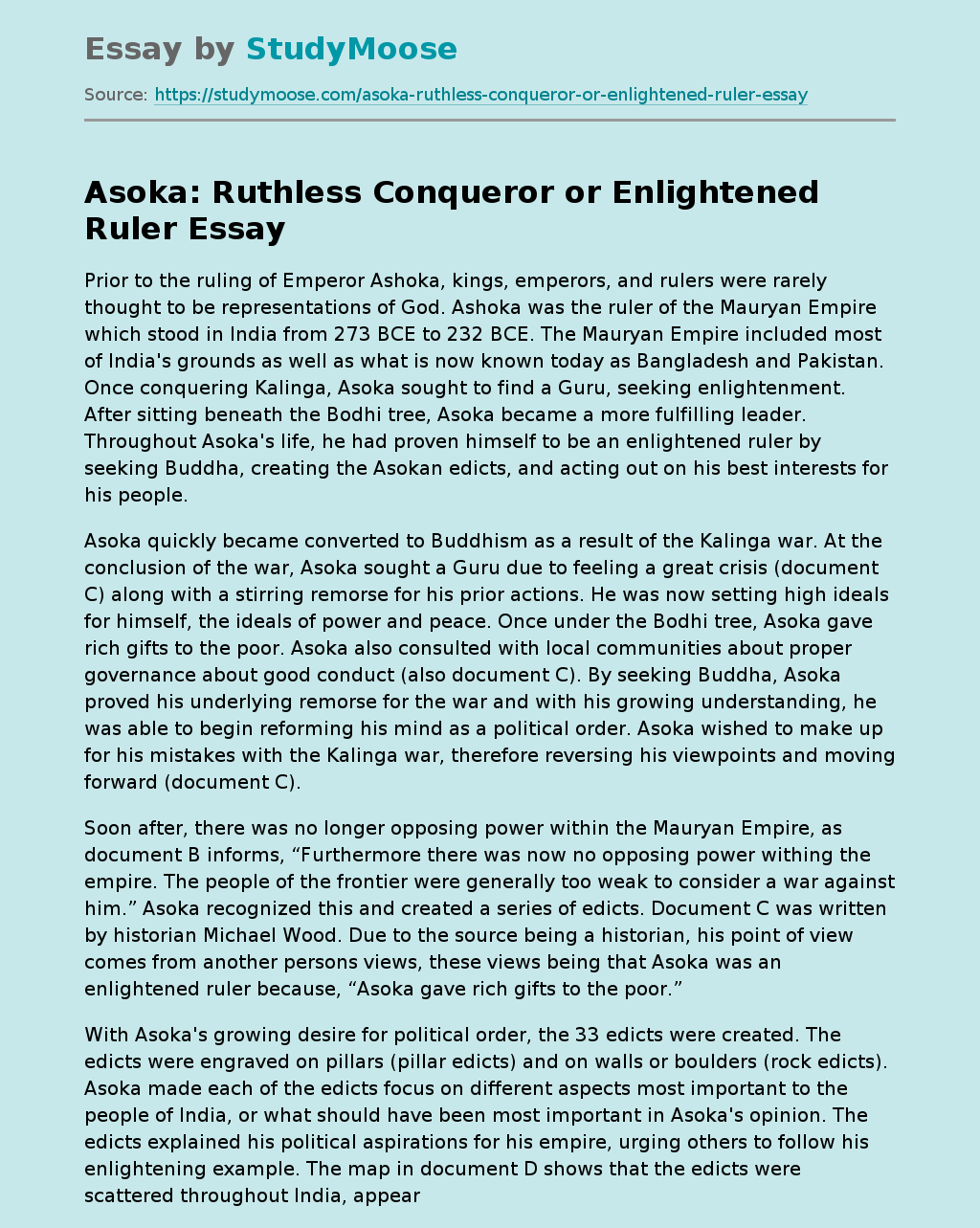