Essay Writing on Shakespeare: Banquo Serves as a Foil to Macbeth

Macbeth was written by Shakespeare between 1603 and 1606, during James I’s reign. It is considered one of his darkest and most powerful tragedies. The story begins as one of a loyal and honourable hero of Scotland. However, Macbeth’s character changes gradually during the play. A powerful ambition for power causes him to make sinister decisions that bring him only despair, guilt and madness. One of these decisions is to kill his friend Banquo because the witches that appeared at the beginning of the story said in their prophesy: “Thou shalt get kings, tough thou be none” (I, iii, line 67).

Don’t waste time
Get a verified expert to help you with Essay Writing on Shakespeare: Banquo Serves as a Foil to Macbeth
Hire verified expert
$35.80 for a 2-page paper

They mean to say that even though Banquo will not be a king himself, he will be the father of future kings. By taking this into account, I am going to analyse how Banquo serves as a foil to Macbeth in terms of honour. Foil, in literature, is a character that is compared or contrasted to a second character so as to highlight the characteristics of the other.

I consider honour in terms of loyalty, allegiance to moral principles and the ability of knowing and doing what is morally right. I am going to explore this hypothesis by taking account of the beginning of the play up to Banquo’s death, in Act III, scene iii.

Macbeth is the epitome of the Prince described by Maquiavelli who takes it for granted that man is incapable of good action, since he is morally evil. Maquiavelli stated that: “[…] all men are bad and ever ready to display their vicious nature, whenever they may find occasion for it […]” (Spencer, 1961, p.

117). The Renaissance is characterised by a basic conflict between man’s dignity and his misery.

Each one of the interrelated orders that set up the frame of the Elizabethan’s way of thinking is being gradually destroyed mainly by three philosophers of that time (Maquiavelli was one of them) who has questioned the cosmological, natural and political orders. Macbeth eagerly accepts the witches’ prophecy, that he will become king, as true, gives in to his evil side and does what he thinks is required to fulfil the prophesy, no matter the risks. That is why he decides to kill the king, Duncan, who represents a great danger to his ambitions.

Banquo, however, represents the opposite to Macbeth because he questions the prophecies and the intentions of these evil creatures. He says: “[…] And oftentimes, to win us to our harm, the instruments of darkness tell us truths, win us with honest trifles, to betray ‘s in deepest consequence. […]” (I, iii, lines 123-125). He argues that evil only offers gifts that lead to destruction, that the witches win people with what is unimportant, though true, in order to betray them in most important things.

Banquo hears the prophecy involving him but he does not attempt to influence his fate, simply chooses to let life take its course and let his future develop by itself. The fact that Banquo does not react from greed shows that he is entirely good, resists the temptations of evil and remains loyal to his good values and noble character.

Just before Duncan’s murder, Macbeth meets Banquo and they agree to talk about the witches’ prophesy when they have time. Banquo’s honourable treats increases Macbeth’s capacity of treason. “[…] So I lose none in seeking to augment it, but still keep my bosom franchised, and allegiance clear, I shall be counselled […]” (II, i, lines 25-29). This quotation suggests that, as long as he does not lose honour in trying to make it greater, always keeps his heart free from sin and his faithfulness to one man only, the king, he will listen to Macbeth’s advice. Banquo’s nobility of character highlights Macbeth’s evilness.

After Macbeth became king, he realizes that, in fact, his friend is a danger to him because of his honourable character and also because the witches have seen he will be father of future kings. By saying: “[…] our fears in Banquo stick deep, and in his royalty of nature reigns that which be feared; ‘i is much he dares; and […] he hath wisdom that doth guide his valour to act in safety. […]” (III, i, lines 48-52), Macbeth reveals that he fears everything that he does not have but Banquo actually does: his natural nobility, his bravery and his wisdom. Macbeth feels that his position in the throne will be safe if Banquo is dead, so he hires two murderers to kill his friend and his son, Fleance. They partially succeed, Banquo dies but his son manages to get away safely.

As we can see through this analysis, Banquo serves as a foil to Macbeth in terms of nobility. Banquo and Macbeth are opposite characters, one has honourable values that he maintains during the play and does not give in to personal desires, and the other is slowly being tempted by his evil side and will get what he wants by any way that is necessary. Macbeth is morally evil and cares nothing about honour and loyalty, he becomes power hungry after hearing the witches’ prophesies and does anything to fulfil them, even killing his good king, Duncan, and his brave friend, Banquo.

Essay Writing on Shakespeare: Banquo Serves as a Foil to Macbeth. (2016, Apr 01). Retrieved from http://studymoose.com/essay-writing-on-shakespeare-banquo-serves-as-a-foil-to-macbeth-essay 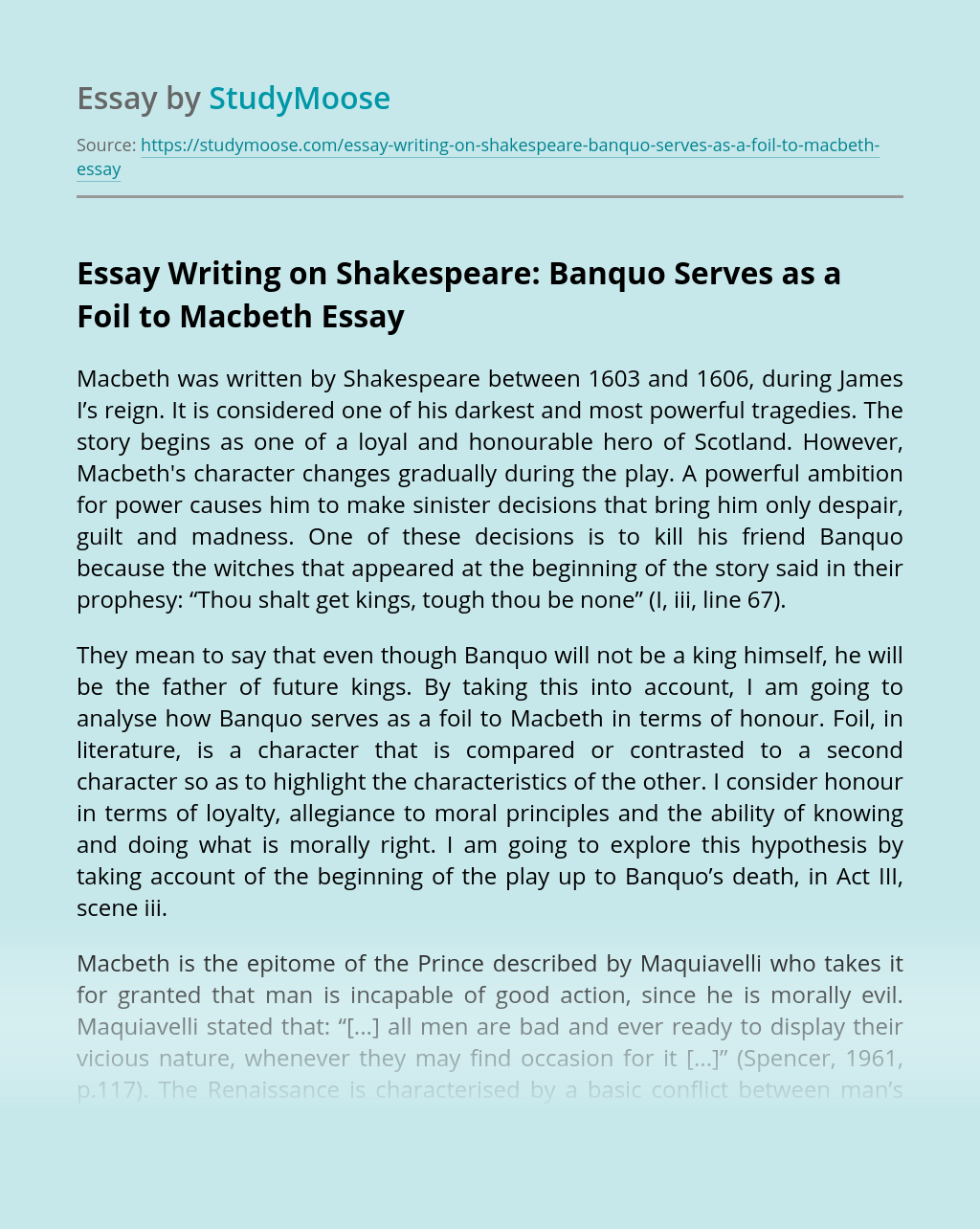 Don’t waste time
Get a verified expert to help you with Essay Writing on Shakespeare: Banquo Serves as a Foil to Macbeth
Hire verified expert
$35.80 for a 2-page paper
Stay Safe, Stay Original