Would you ever consider the one you love to lead you to the grave? Lady Macbeth proves that royalty outweighs the quality of love. In William Shakespeare’s Macbeth, Macbeth and his wife face physical and psychological tragedies through their ambitious rise to the throne. For instance, Lady Macbeth displays an attitude of pure greediness, which in turns leads to the death of her and her husband. As the play unfolds, her true intentions put a damper on her husband’s attitude toward life and she exploits him into doing her dirty work.

Don't use plagiarized sources. Get your custom essay on
“ Character of Lady Macbeth ”
Get custom paper
NEW! smart matching with writer

Lady Macbeth becomes the ultimate reasoning for Macbeth’s downfall by belittling of character, influencing him to commit heinous acts, and unfolding his ambitious nature.

Furthermore, Lady Macbeth discredits her husband’s abilities by scorning his masculinity and questioning his manliness, which is a reason for his downfall. Because he has a fright to kill Duncan, Lady Macbeth intimidates him and blurts, “I dare do all that may be a man.

/ who dares [do] more is none” (Shakespeare 1.7 49-50). By questioning his manhood, Macbeth encourages to go forth with the killing. She uses mockery as bait to make her dreams of being queen a reality. Lady Macbeth proves Macbeth’s ideas to be erroneous by saying, “Art thou afeard/ To be the same in thine own act and valor/ As thou art in desire?/ Wouldst thou have that…./ And live a coward in thine own esteem/ Letting ‘I dare not’ wait upon ‘I would’/ Like the poor cat I’ that adage” (Shakespeare 1.

7 43-47). Lady Macbeth needs her husband to have dedication and get the job done. She ridicules and encourages him to kill. Because of their close relationship in the beginning of the play, Lady Macbeth’s influence over him guides him to follow through with the murder of Duncan.

In addition, Lady Macbeth’s nature influences Macbeth to commit terrible acts of violence against his supposed ‘friends’, which is an addition to his downfall. Because Macbeth is unsure in pursuing the sin, she fuels his fire by saying, “Thou wouldst be great/ Art not without ambition, but without/ The illness should attend it” (Shakespeare 1.5, 39-41). Her demanding presence pressures Macbeth to commit the crime. Macbeth does not want to upset his wife by letting his weakness get the best of him. Through her persuasive tongue, she controls her husband and wants him ‘[to] look like th’ innocent flower but be the sergeant under ‘t” (Shakespeare 1.6 76-79). Her strategy to question his manhood assures he would commit the crime. Macbeth must remain innocent, and after they welcome the King, he has to be devious and murder him. Her way of building up his moral persuades him to truly become the serpent, kill Duncan, and become a ruthless King!

Moreover, Lady Macbeth’s ambitious appetite to become queen makes Macbeth a monster and unfolds his aggressive nature, which contributes to his downfall. After earning the title of Queen, she becomes resentful of life and display her guilt by outwardly admitting to the crime during her sleepwalking and says, “Out damned spot out, I say one two/ why, then ‘this time to do’t. Hell is murky […] Yet who would have thought the old man to have so much blood in him” (Shakespeare 5.1 44-47). Lady Macbeth becomes guilty for creating her husband into a ruthless human. Their marriage becomes strained and after Lady Macbeth’s death, Macbeth says “Out, out, brief candle!/ Life’s but a walking shadow, a poor player/ That struts and frets his hour upon the stage/ and then is heard no more: it is a tale/ Told by an idiot, full of sound and fury, signifying nothing” (Shakespeare 5.5 76-81). She manipulates him into killing Duncan, he becomes unable to stop himself and will do anything to stay King. Lady Macbeth dies in Act 5, but Macbeth is so in tune with himself, he disregards her death to focus on battle.

As a final point, Lady Macbeth’s is the ultimate reason for Macbeth’s downfall because of how she manipulates him to kill Duncan, influences him to become king by restating his prophecy, and degrades his manhood. Her attitude towards Macbeth throughout the play encourages a spiraling of his character by the end. Lady Macbeth’s relationship with Macbeth becomes tainted throughout the play which contributes to her death by suicide and his attitude towards life by the end of Act 5. The importance of understanding Lady Macbeth manipulative nature is how it contributes to Macbeth’s approach in becoming a ruthless king. By applying Lady Macbeth’s original teaching to his own life, it detrimentally takes ownership of his physical and psychological state. Macbeth develops into a shrewd, ravenous king that becomes destined for death! 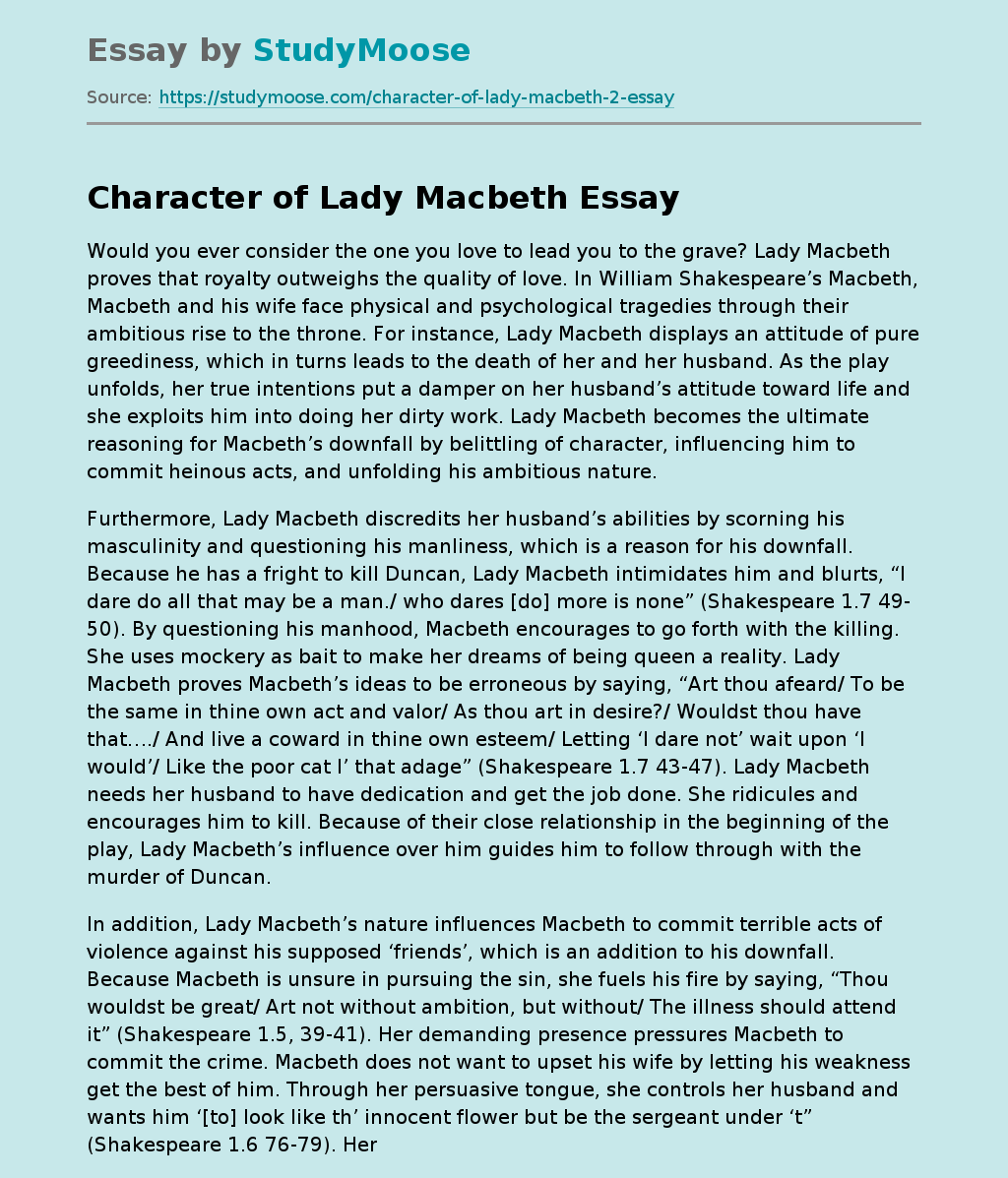