What makes Salom from the book Tribes such an interesting character?

In the Catherine MacPhail novel Tribes a starred character is Salom. He is the focus of the book, and the one who makes it interesting. It is really amazing to be dragged into the other side of the world as we know it, and how real this world is. Salom represents not only gangs, deeply troubled teenagers with unlikely futures but also the deeper meaning of evil and if it exists. Kevin Davidson has lost himself between the life of a gang, and his ordinary if not a little embarrassing family, and the only thing keeping him from normalcy is Salom.

Don't use plagiarized sources. Get your custom essay on
“ What makes Salom from the book Tribes such an interesting character? ”
Get custom paper
NEW! smart matching with writer

But the book explains that people like Salom aren’t born vicious, manipulative, and dark, but that there is a cause, a background which will make the reader debate about their impression of him.

Salom is an actor, a liar, a fabulist. He even manipulates adults like Kevin’s parents into believing he is the great, charming boy he pretends to be.

Proficient in: An Interesting Book I Read

He has actually influenced all of the Tribe into thinking that he is heroic, fantastic and a role model. For example towards the end of the book he persuades Glory to do the life-threatening Walk of Death. He talks the responsible, smart, independent Kevin into skipping school, and Torry into believing that Salom had the right to almost push MacAfee off a pier! He has skill, he can buy trust of his friends just with his green honest eyes, reassuring smile and soothing words. He knows how to put on the show of ‘the hero’.

For instance at the line dancing performance of Kevin’s parents that was almost ruined by a flood of marbles Salom saved the day by motivating the crowd to pick up the marbles and restart the dance. The act got him full trust of the Davidson family which he could use for his own personal gain. His manipulative personality is his most dangerous weapon.

But his personalities aren’t his only tools. He physically has advantages too. He’s athletic, a fast runner like when he planned the trap for MacAfee, he was bait, Salom had to run and in chapter 19 Kevin describes just how he did it: ‘He moved like an athlete, all his concentration on speed. Faster and faster with his jacket flying behind him.’ Being part of a gang probably involves a lot of training and sports, especially if someone has such a reputation like Salom to uphold. He is also a quick thinker, a planner who thinks ahead and is aware of all dangers and details. When he wanted revenge on Kevin for accusing him he knew hurting his sister would tear out his heart, he knew just when and where to find her when Kevin wouldn’t be aware of it, he knew he could persuade her and how Glory in the Tribe would hurt Kevin most. All his skills would have done him good in the normal world if he didn’t use them for his cold blooded harm and destruction.

It is not only Salom’s acting and personalities that make him interesting, but also the way Catherine MacPhail narrates him throughout the book. The way she writes about him makes him a little too nice so we raise suspicion, but not obviously enough so we know what it is that’s so odd about Salom. He doesn’t seem like the person to be keeping secrets, he is so open and even introduces Kevin to his family, I didn’t think of him of mysterious in the secretive way, but more in the rumored way. The graffiti writing reading ‘Salom is evil’, unanswered questions about his past, but mostly all the stories, rumors and accusations leading to him. So many things pop up about him you just keep thinking ‘really? Would he do that? Why? Could it be true? And when the pieced come together there is a big change in direction. Reasons and sense start to surface which can change the readers mind completely. It’s the thinking, the challenge of opinion that draws readers to Salom.

I always hear people calling Salom evil for what he did or might do, but the thing the book taught me was that there is always a reason. With Salom it’s his family. Salom himself described his family as ‘The family from hell’ multiple times. In my opinion Salom’s mum is worse then his dad. His mum is often described as ‘too loving’, but his mum doesn’t care about him the way a parent should. She has no power or saying over her own family, and if a child is not told how to act, the child will teach itself and I can only imagine that ending in Salom because usuallly mothers are responsible for the child’s behavior, and the father more for keeping the family alive and happy, but Salom’s mum has no qualities a parent has to have.

Salom said in chapter 19 ‘I used to do things just to see if she’d tell me off. She never did.’ To her, everything Salom does is okay even when it’s not. His father is a different problem. He is an alcoholic and that’s the worst role model a father can be. He doesn’t look after his family, careless, irresponsible and shouldn’t be a father. And when he cares, he cares violently. For example on page 153 he says ‘I should have got my belt to him long ago’ and abusing young people can cause post-dramatic disorder and depression. I do understand why Salom needs the Tribe, they are his only family.

Salom is considered evil or distressed. I have heard debates about whether evil exists in teens, or if, if Salom is the example of evil. Salom has had a sad childhood and with the poor parenting he got, he needed something to be his family so he found the Tribe. I feel sympathy for him, but what he went through in his home is not enough reason for him to be ruthless, vicious and harmful. Readers feel a lot for Salom, pity, sympathy, sorrow, understanding and forgiveness when some feel shock, distaste, disgust, disapproval, and scorn. He is a killer, a fabulist, treacherous, dangerous, wicked, merciless, and cruel.

But also desperate, determined, disturbed, miserable, needy, and the Tribe is his only solid relationship until Kevin came along, found out what he was doing and left. I would also he upset in his situation. I think he crosses the line too often, he does things NO ONE should do, like revenge by pushing people down stairs and causing injuries, or being very close to drowning someone if not stopped. To me he is not necessarily evil, but definitely needs to be away from society, maybe even in rehab or at a psychology centre. What he is to the reader is the readers own choice to make.

Salom has 2 personalities and it’s never cleared up which one is more like him, but he is definitely the most challenging character of Tribes. Kevin figured out what Salom was capable of and unleashed himself from gang rule and Salom himself. But I think under his sheet of cruelty lies the nice, smiling Salom Kevin thought he was, for me the books moral is that what everyone already has is the best they’ll get so don’t try to be part of something you never were part of inside, and evil is a word describing people that just do bad things, nobody just does bad things, there is always something behind it, so when you get that, you understand, and when you understand, you forgive.

What makes Salom from the book Tribes such an interesting character?. (2016, Mar 17). Retrieved from https://studymoose.com/what-makes-salom-from-the-book-tribes-such-an-interesting-character-essay 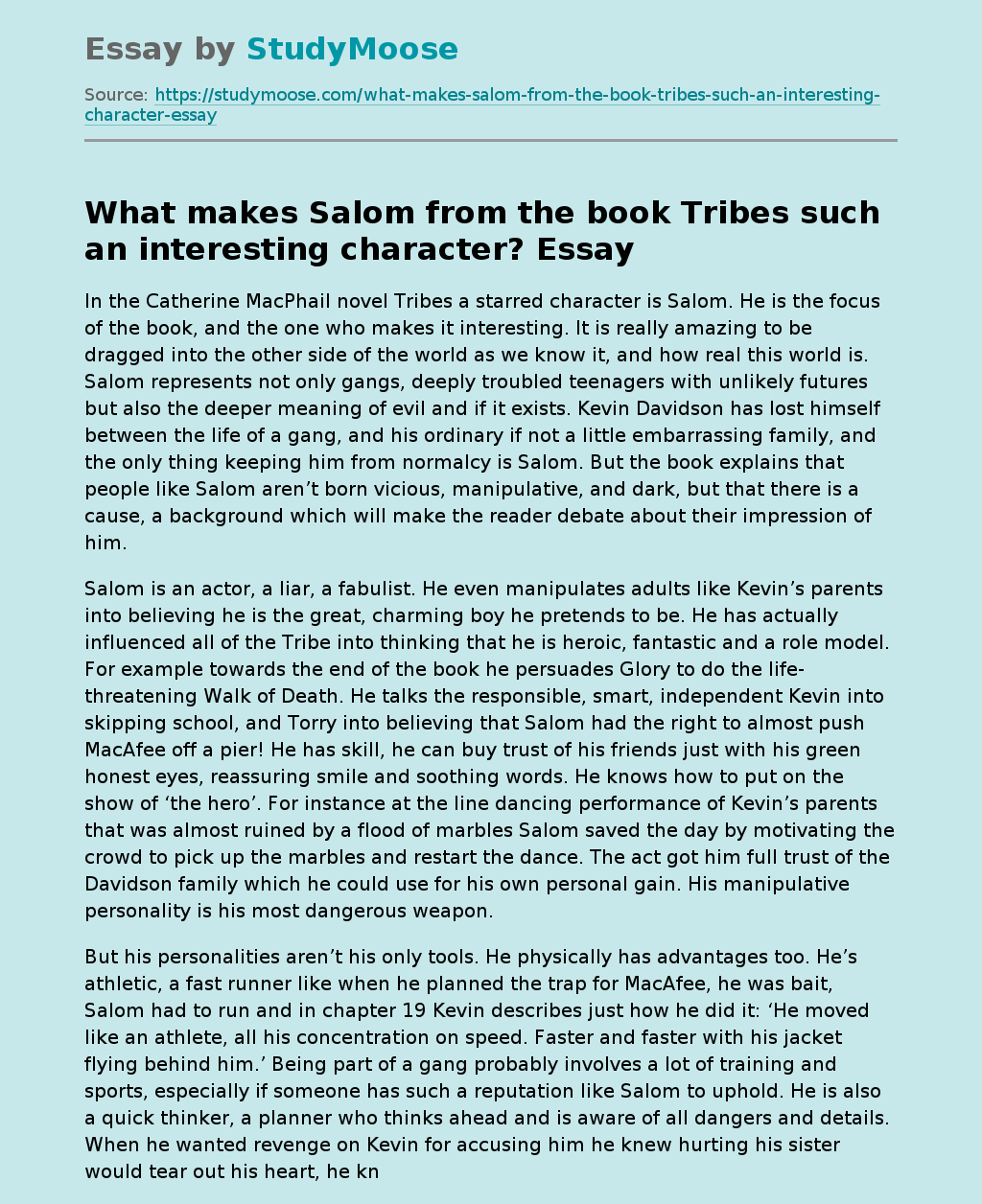