As a lover of cinema, I have seen many movies that I find interesting or fascinating in some manner. Recently, the most remarkable film I have seen is James Cameron’s Avatar. This science-fiction epic was made using cutting edge technology but also has a story line that is engaging and captivating for the audience. The movie has underlying themes that make the audience think and feel while being entertained. Avatar stretches the bounds of cinematic imagination and takes the viewers on a wild ride.

This movie is meaningful and beautiful all at the same time. Avatar has a powerful moral fiber that plays throughout the entire movie. It is a meaningful reminder that all life is precious and worth being explored. This film is meaningful to me for many reasons.

Avatar takes place in the year 2154 on a moon called Pandora. Humans have discovered very valuable natural resources on Pandora and will do whatever it takes to obtain what they need.

Initially, the humans decide that using force to take control of the resources may be the wrong way to go about dealing with the people of Pandora. The Earthlings decide instead to set up schools and teach English to the moon’s inhabitants to try to win them over. The main people of Pandora are the Na’vi, a 10 foot tall, blue-skinned humanoid alien group that live in the rainforests of Pandora. The humans are able to interact with the Na’vi by artificial yet organic avatars, modeled on Na’vi DNA but controlled with a human mind and conscience.

Jake Sully, a young crippled Marine, is given the task of infiltrating the Na’vi and talking them into leaving their homes. He was injured and is now wheelchair bound. In order to have the required surgeries to re-gain the use of his legs, Jake must take this offer and learn the weaknesses of this alien group. He enters this alien world using his deceased twin brother’s avatar. He starts out with selfish intentions but after getting to know the ways of the Na’vi, changed his mind and heart. Sully becomes swayed by the beautiful Neytiri. She is strong and fierce but has a strong, loving bond with the world around her. She becomes Jake Sully’s teacher, interpreter and guide to the world of Pandora. Under her guidance, Jake goes native and begins to put the Na’vi and their interests before his own. He learns their ways and begins to live amongst them. The futuristic Eden-like rainforests of Pandora become his second home. He decides not to help the humans destroy Pandora for their advancement. For Sully to disobey an order is a huge change. A war breaks out between the people of Pandora and the human military. Jake must choose sides and decide to fight for what he believes in. This internal conflict within Jake is the struggle for human dignity. Avatar shows how a character can change when the “masters they serve” change.

Avatar has a few underlying themes and points that aide in telling this majestic story. It also focuses on many ideas. This movie has a very “green” tone. It is eco-friendly and shows the complexities of even the tiniest ecosystems. This movie is meaningful to me because I agree with the themes of this movie.

This story also shows how all creatures are intertwined and affect one another. Pandora is an odd place with floating mountains, flying reptiles, six-legged wild horses that fly and strange objects that look like jellyfish. The Na’vi are actually physically combined with the winged horses they ride; the riders must plug themselves into the animal’s circuitry. Avatar shows how all creatures of a planet affect one another and how they must live in harmony for all to survive or thrive.

In this utopia, technology and ecology fuse (Charity, 2009). On
Pandora, the electrical currents flow through the root systems of the trees and plants. Its rainforest resembles a coral reef and is full of color. At night, the plants in the forest glow and the ground lights up under the feet of the Na’vi. The harmonious home of the Na’vi shows the blending technology and an eco-system.

This movie also has an anti-corporate tone. The film shows the devastating impact large companies have on indigenous people. The bulldozer in the garden sequence is the climax of the humans vs. Na’vi conflict. The human military brutally destroy a pristine landscape and slaughter the innocent, nature-loving Na’vi. The film draws the audience into the mysteries and beauty of Pandora and then horrifies when the machines do their damage. The audience grieves because the destruction in this scene is tragic and overwhelming. Corporate corruption and greed is an underlying foe in the film.

And lastly, the movie shows the importance of the balance in nature. The people of Pandora worship Eywa, a goddess who takes care of keeping the balance in their nature and their lives. She is very important to this group. When the battle begins, Eywa sends animals to help her follower’s defend Hometree, the center of life for the Na’vi. The balance between any species and nature is a major theme in Avatar.

James Cameron’s Avatar blends live action and computer animation seamlessly. It blurs the real and the imaginary, the material world and the spiritual one. James Cameron’s movie has themes of environmental destruction, corporate corruption and balance in nature. To me, this film reminds the audience that we as humans affect our environment and we should take care of our planet. 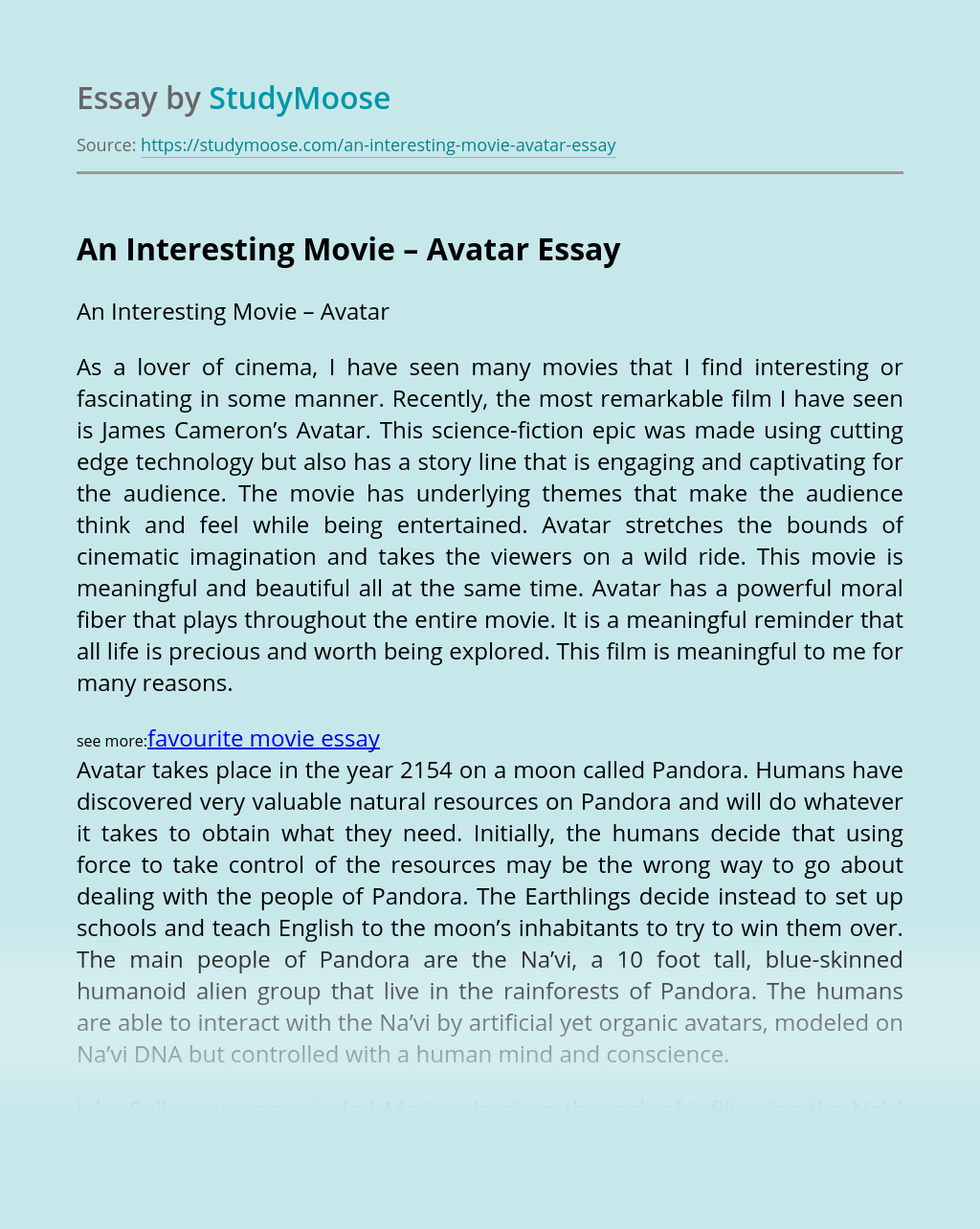 Don’t waste time
Get a verified expert to help you with An Interesting Movie – Avatar
Hire verified expert
$35.80 for a 2-page paper
Stay Safe, Stay Original