Avatar, the epic movie by James Cameron, the director behind Titanic, is a project that has caused pop-culture ripples. James Cameron conceived the idea of Avatar back when he was working on Titanic. But the technology was not available then to bring his vision to life in the big screen. So instead of making the movie with sub-quality effects, he basically threw it in the drawer and it was not until 2005 that he decided to bring his masterpiece to life. In 2005, Cameron, along with Vince Pace, invented new ways of capturing the performances of the actors.

Don't use plagiarized sources.
Get Your Custom Essay on My Favorite Movie: Avatar Just from $13,9/Page

Their team developed a brand-new image-based facial performance capture system which utilizes a head-rig camera and is able to record even the tiniest of facial movements. Avatar was filmed in stereoscopic 3-D using the brand new Fusion Camera System, which took seven years for Cameron and Pace to create, and is now the most advanced system of its kind. That is the reason why the actions of the natives looked so life-like and realistic, and that is because these parts were played by the actors, and the bodies of the Avatars were built around this motion, making each performance different, and making the Avatars more like the actor than any animated character would be.

Hence, Avatar was very much a live action film, not an animated film. The story took place on the planet Pandora, which, according to 20th Century Fox’s production notes, is “a moon with an Earth-like environment that orbits a gas-giant planet called Polyphemus in the Alpha Centauri. At 4.5 light years away, Alpha Centauri is our nearest stellar neighbor. And when it is discovered that Pandora is rich in a rare-earth mineral called Unobtainium, the race is on to mine the new world’s resources.” In the movie, Sam Worthington who starred as the film’s hero, Jake Sully, a disabled ex-marine, was called to help the humans convince the Na’vis give up their home tree.

But as Jake Sully lived the life of Na’vis through his Avatar, he has learned to love the ways of life and beliefs of of the Na’vis. Sully, having realized what his fellow humans would cause to Pandora and the lives of the natives, eventually turned his back from the orders given to him, and helped the natives fight for their home. The film became a huge hit. It has reached the Five Hundred Million US Dollar mark in 32 days and became the highest-grossing film on January 26th, 2010, with a final worldwide gross of Two point Eight Billion US Dollars, beating Titanic, the previous record-holder and was also written and directed by Cameron, with a worldwide gross of One point Nine Billion Dollars. 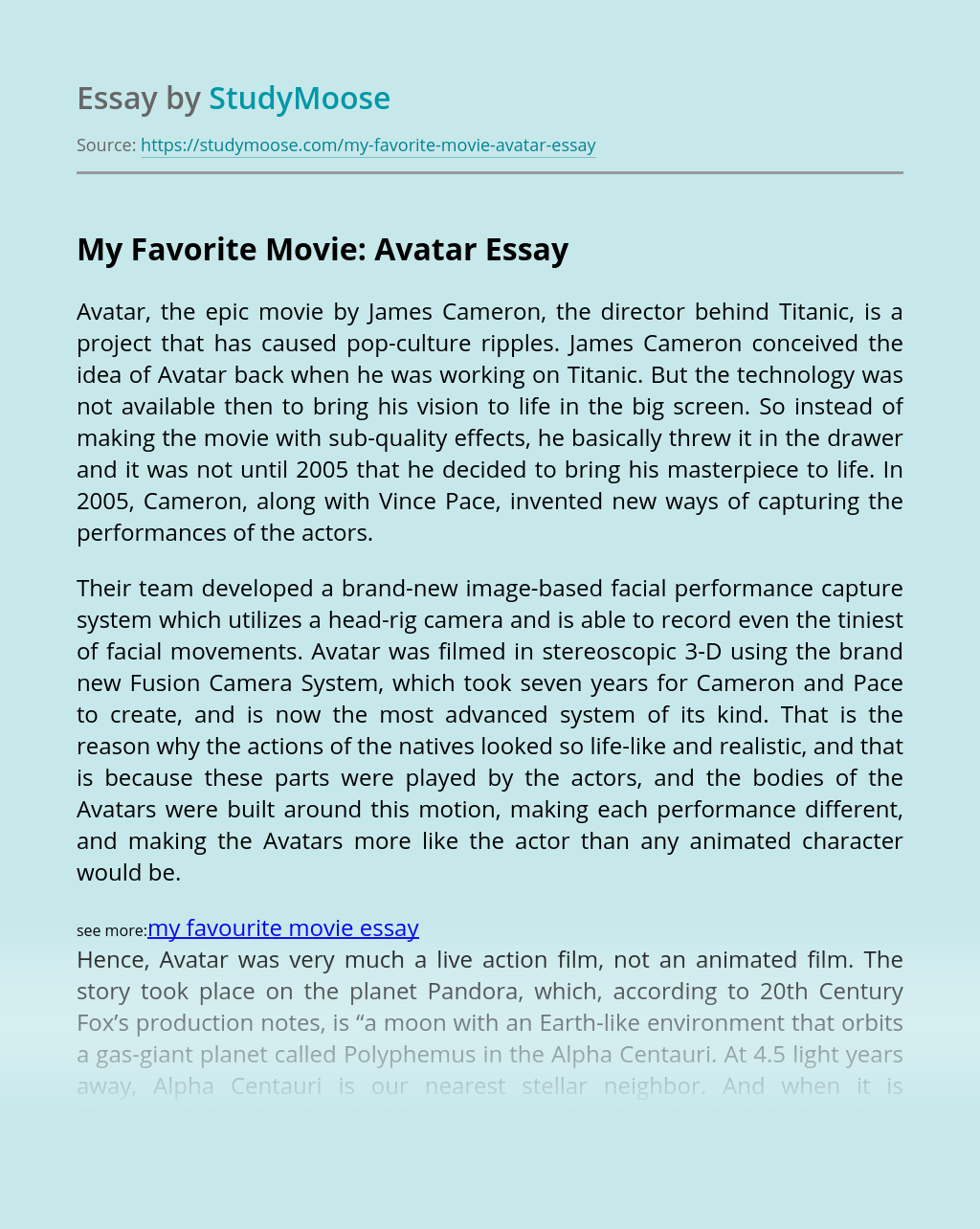 The dramatic film ‘Tsotsi’ instills a sense of hope that even the worst can change. Tsotsi is an awe-inspiring film about a teenager who struggles for survival. At a very early age he experienced the loss of his mother, an abusive father which eventually led him to take it to the streets. His upbringing on...

Interpersonal Conflict in the Film Spanglish

The film Spanglish portrays many examples of interpersonal conflict between characters. An interpersonal conflict is two or more persons having different views on a specific thought or idea. In the film one of the most noticeable conflicts occurs between Flor, the house keeper, and Deborah, the mother. The movie is based on the struggles of...

The opening sequence of a film has to tell us a great deal about the story, it’s the opening sequence, which captivates the mind and keeps the viewer interested. Franco Zeffirellis opening shot is of the camera panning over a long-shot of central Verona, he does this to give an insight into the city, a...

Cause and Effect of Movie Crash

Crash, a film directed by Paul Haggis in 2005, is a film that follows characters whose lives intertwine over the course of just a few hours. These characters all have different cultures, ethnicities and backgrounds, but are each in front of the identical issues of racial discrimination and stereotyping because of their differences. Making the...

Introduction To critically evaluate the influences of neorealist aesthetics on Rome, Open City (1945) and 8½ (1963) I believe there are several measure I have to take. First of all, I believe it is essential to get a clear understanding of Italian neorealism and the common aesthetics of neorealist films. Once I have that established...