"Jesus was a good man and a good teacher but nothing more."

Do you agree? Give reasons for your answer to show that you have considered more than one point of view. Refer to Christianity in your answer.

I believe Jesus was presented as a good man, but also a lot more. Jesus performed miracles, healed the ill, stripped people of demons and brought about Christianity. In Mark 4:35-42 and 5:30-45, Jesus shows he is a saviour by calming the storm and feeding the 5,000. In Mark 2:1-13, the healing of the paralysed man, Jesus heals a man showing he has authority on earth, and showing he is the Son of Man.

Don't use plagiarized sources. Get your custom essay on
“ “Jesus was a good man and a good teacher but nothing more.” ”
Get custom paper
NEW! smart matching with writer

Proficient in: A Good Teacher

This is proved in Mark 1:9-14, Jesus’ baptism, when God spoke from Heaven and said ‘”You are my own dear Son. I am pleased with you.”‘ Also in Mark 9:2-13, the Transfiguration, when God said ‘”This is my own dear Son – listen to him!”‘. The first line of Mark also declares Jesus as the Son of God: ‘This is the Good News of Jesus Christ, the Son of God.’

So Mark didn’t show Jesus as just a good man, for any ordinary good man would not be able to do of those things.

But on the other hand, some people, particularly radical liberals do believe Jesus was just a good man and nothing else. Like the theory popular with liberals; that Jesus wasn’t the Messiah and the Gospel writers just made it up. They think it was later that Mark- who believed Jesus was the Messiah- came up with the idea of the Messianic secret.

Others believe Jesus was nothing more than a good man, because he was a good man. They believe the people he ‘healed’ had so much faith in Jesus that it was exactly that which cured them, not Jesus himself. So Jesus didn’t actually perform miracles, people just thought he did, so the people he cured just needed to believe that they could be cured, and they were.

As Robin Cooper says in ‘Mark’s Gospel an Interpretation for Today’, many people today have forgotten that Jesus was a human being. The Church teaches that Jesus was fully God and fully human, so he wasn’t God pretending to be a man, or a super-human figure. But some Christians believe that Jesus was just a good man and as Mark tells us. Mark tell us he was just a carpenter (Mk 6:3) who began to travel around Galilee as a preacher and teacher. He was very much a man when he would seek the peace of a lonely place, or go off into the hills (Mk 1:35; 6:46). It seemed very human to be misunderstood by his own family (Mk 3:21) and to feel human emotion, such as love, anger, anxiety, sorrow and distress. Like in the Garden of Gethsemane when Jesus shows anxiety and distress (Mk 14:32-42).

So Mark presents Jesus and a human being, (and he uses his name Jesus to do that) to show is like an ordinary man who feels emotion and has characteristics. Maybe this is why some Christians believe he is just a man, for that is what his personal name was for; to show Jesus’ humanity.

I can see why people could believe any of these ideas, but I think it is explained so clearly in Mark that Jesus was the Messiah, Christ, Son of David, Son of God, Son of Man and Saviour that it is so hard not to believe it. All these titles are backed up with stories and miracles and unless the whole of Mark’s Gospel is made up, I think Jesus must have been all these things, not just a good man.

"Jesus was a good man and a good teacher but nothing more.". (2021, Nov 02). Retrieved from https://studymoose.com/jesus-good-man-good-teacher-nothing-new-essay 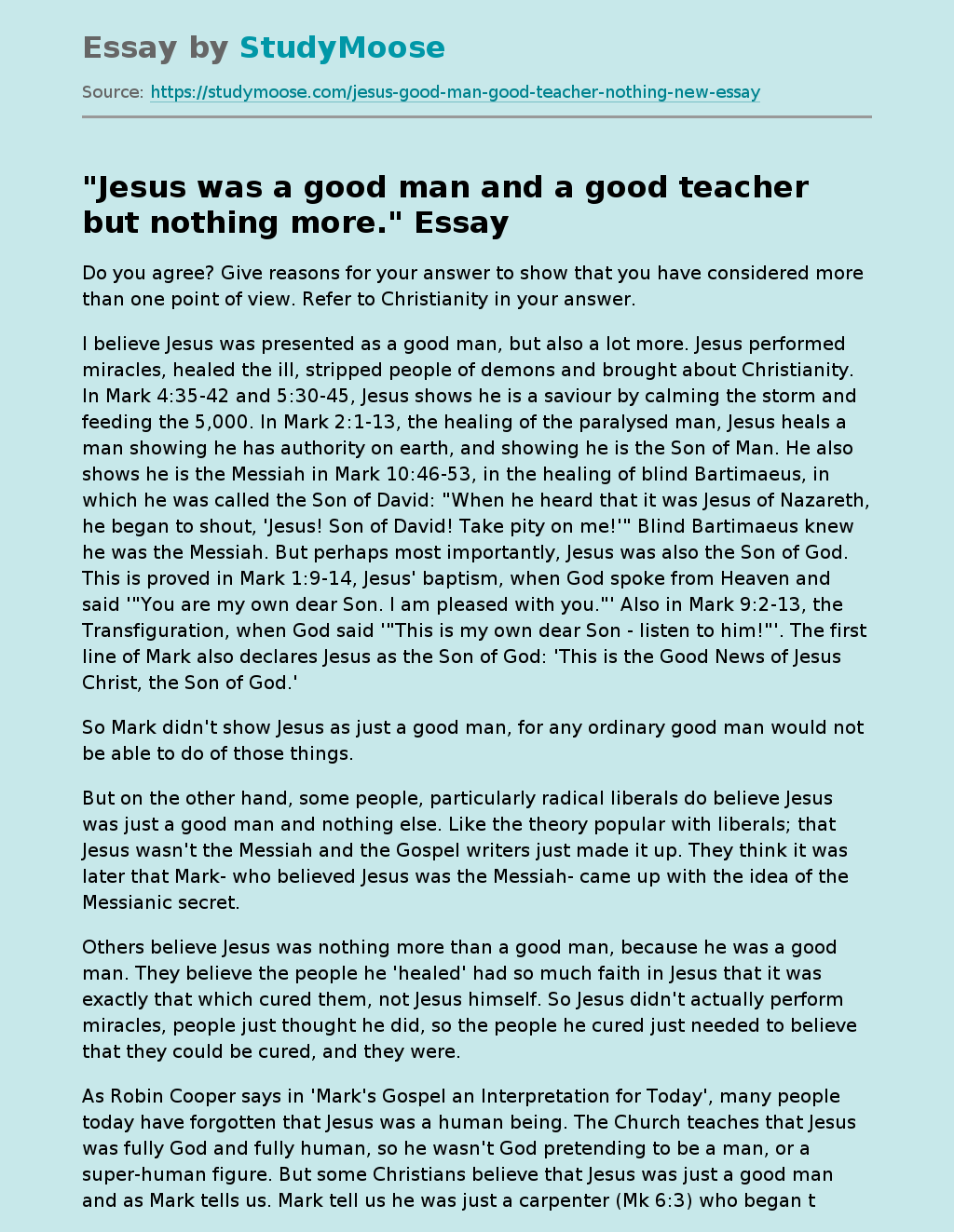