A Comparison of Vietnamese and American Writing-Pedagogy

A Comparison of Vietnamese and American Writing-Pedagogy

Don't use plagiarized sources. Get your custom essay on
“ A Comparison of Vietnamese and American Writing-Pedagogy ”
Get custom paper
NEW! smart matching with writer

Though I need to read more about American writing pedagogy, I see some basic similarities between the two countries. As in the United States, mathematics and language arts are important subjects in Vietnam. In Vietnam, however, writing isn’t a subject per se, and students develop their writing skills through the study of literature. In primary school, the teacher begins by asking the student to write simple and short paragraphs about what happens in his/her daily life.

Popular writing topics include “the person you love best,” “pets,” and so on. When grading, the teacher pays attention to spelling, clarity, and the way students use words. In secondary school, a student begins to write longer and more difficult essays, including plot summaries, movie reviews, character- and other kinds of literary analysis.

Students continue to study writing up to graduation, when they are required to demonstrate their mastery of writing skills in an exam.

Students who want to go on to university must pass an additional exam. The different is, however, university students do not take courses devoted to writing. They devote their time to their majors. Form is an important element of essay-writing in both countries. As in English, an essay in Vietnam includes three parts: the introduction, the body and the conclusion. There is a major difference, however: In America, the college essay derives from classical rhetoric. Ultimately, Aristotle and the syllogism provide the basis of a linear and logical structure. Milton’s “Of Education” and his political writings would be examples here. In Vietnam, the classical model derives from the Chinese/Confucian tradition. That tradition emphasizes the elaboration of or commentary upon a classical text or phrase. The Western essay is very linear and “thesis-driven,” and compared to it the Vietnamese
essay can seem circular. To Vietnamese, it is organic. Models for this form can be found in Zhuang Tzu’s, Meng Tzu’s “Doctrine of the Mean” or Literati prose. Even though these two classical models have been changed and developed considerably in modern writing, their original ideas have great influence on writing customs between the two countries.

Western essay strictly follows the thesis statement and topic sentence. All sentences are coherent and support to topics sentences. Vietnamese essay, however, is circular. Students don’t go directly to their topic but approach to indirectly. The reader knows what the student is doing and tries to enjoy the essay. The approach isn’t as analytical. In Vietnam, academic essays can be of different types: description (van ta), commentary (binh luan), proof-and-explanation (chung minh va giai thich), analysis (phan tich), and critique (binh giang). In the introduction to an essay describing a landscape, a student gives general information about the place, time and setting, and the reason he/she is writing. An analysis or a proof essay is a little different. Most importantly, here a student has to give information about the author, setting and social background of the story. In the body, he/she takes up the selected text and discusses its general characteristics, outstanding features, details and logic. Connections between commentary and text should be clear. The conclusion, in general, offers a brief summary of the main idea and a personal or “felt” response to the subject.

The most important differences between English and Vietnamese writing are linguistic and cultural. English grammar is demanding and prescriptive with regard to such matters as tense, agreement, singular and plural forms, etc. In Vietnamese, however, word-building is very complex, and students devote their attention to morphology rather than syntax. Vietnamese (again like Chinese) has classifiers, a linguistic item unknown to English. Lexical items are variously “classified” in countless ways, including “animate” (con), inanimate (cai), “book-like” (quyen), “picture” (buc), “photographic” (tam), “food or medicine” (thuc). The classifiers can be baffling to non-native speakers of Vietnamese. Student-writers have to know how to use classifiers correctly, however, so they have to master word building skills that English students don’t. Finally, there are pronouns. “He,” to give only one example, can variously be any of the following in Vietnamese: no, anh, anh ay, anh ta, ga, y, ong ay, and ong ta. Knowing these dedicated differences and using them correctly in each context is very important in writing.

These linguistic features perhaps help to account for the Vietnamese love of word- play and elegant variation in many contexts where they would be unusual in English. The beautiful is important. This notion of elegance even carries over into the technology of Vietnamese writing. Computers haven’t reached most VN classrooms, and the technology of penmanship still matters. Because enthusiasm in writing comes from the beauty of nature and internal sensation, sitting with teacher and friends in a writing class is believed to be better than with technology devices. Third, I would like to introduce what a good essay is. A good essay is the combination of good grammar, language and knowledge. When grading, the instructor usually pays attention to the content: accord with the topic, clear form and organization, proportionality between introduction, body and conclusion, cohesive transition, logical phrases and sentences, correct spelling, clarity, neat presentation… The instructor often would underline obscure sentences or redundancies, cross out sentences that may be incohesive, contradictory and write his/her comments at the beginning of these sentences. Now we come to another question: how is a writing class organized? Because a writing class is in fact a literature class, the teacher lectures most of the time. Sometimes, he/she stops to ask students some questions related to his/her lecture or ask them to give their own opinion about some things.

The class is not divided into groups for students to discuss or write collaboratively. Students listen to their teacher and write on their own. After students submit their tests, the teacher grades and comments. Normally, the teacher chooses interesting and good essays to read aloud and points out how they are interesting, what is good about them. Then teacher mentions those essays that are not very good, points out the common errors and teaches students how to avoid these errors in later tests. Since writing an essay in Vietnamese usually means writing about literature, the reader may wonder how a student writes essays on other subjects, such as history or geography. Invention is not stressed as much in Vietnam as here. Students listen to the teacher’s lecture and takes note carefully. Sometimes, professors simply dictate their notes to students. Before exams, teachers often give students a list of questions to prepare at home. Students find the answers in the teacher’s textbooks or notes, and then try to get them down by heart. The teacher chooses one or two topics for student to write at the exams. There are no take home exams. Students do their research the same way as here.

The teacher gives student topics to write about, and the student then chooses a topic and writes a proposal. The teacher will offer suggestions or advice. After that, the student collects material from books, newspapers and the Internet and starts to write. Thesis topics are often very broad. Therefore, the student needs to convince his/her readers using reasonable and logical arguments. The way Vietnamese learn how to write in their own language is of course different from the way they learn to write in English, which is a foreign language. In the following paragraph, I’m going to point out what the differences are. In theory, a student is supposed to learn every step as a native speaker does. The purpose is to learn how to write good essays. However, a writing class in Vietnam is usually more like an ESL class than an American writing class. Freshman and sophomore students learn to write sentences and short paragraphs. The topics are often very simple, for example: write about the first day at school, an unforgettable memory. The teacher focuses on grammar, and the way of using words. Juniors and seniors learn to write essays, but what they learn is basically the theory; they don’t practice writing essays very often. A student is only required to write essays in final tests or graduate exams. The essay is usually about 1-2 pages in length. A 4-page essay is the longest.

The topics are about what happens in daily life. In these essays, a student writes his/her own opinion, what he/she sees and thinks. Because their English is limited, students rarely do research in the language or make many quotations. Students aren’t usually acquainted with MLA/APA styles, and teachers focus mostly on grammar errors. In order for students to practice writing, the teacher gives writing assignments for them to write at home. Then the teacher will ask a student to write the assigned essay on the chalkboard. The whole class discusses the ideas and grammar in this essay and participates in the writing process. We have seen that writing customs vary from one country to another, especially between the cultures of East and West. Differences in writing pedagogy reflect cultural and linguistic differences. Being aware of those differences would be of importance to anyone teaching in a diverse classroom. Appreciating those
differences can lead to a richer sense of the possibilities of language for all peoples.

A Comparison of Vietnamese and American Writing-Pedagogy. (2016, Mar 22). Retrieved from http://studymoose.com/a-comparison-of-vietnamese-and-american-writing-pedagogy-essay 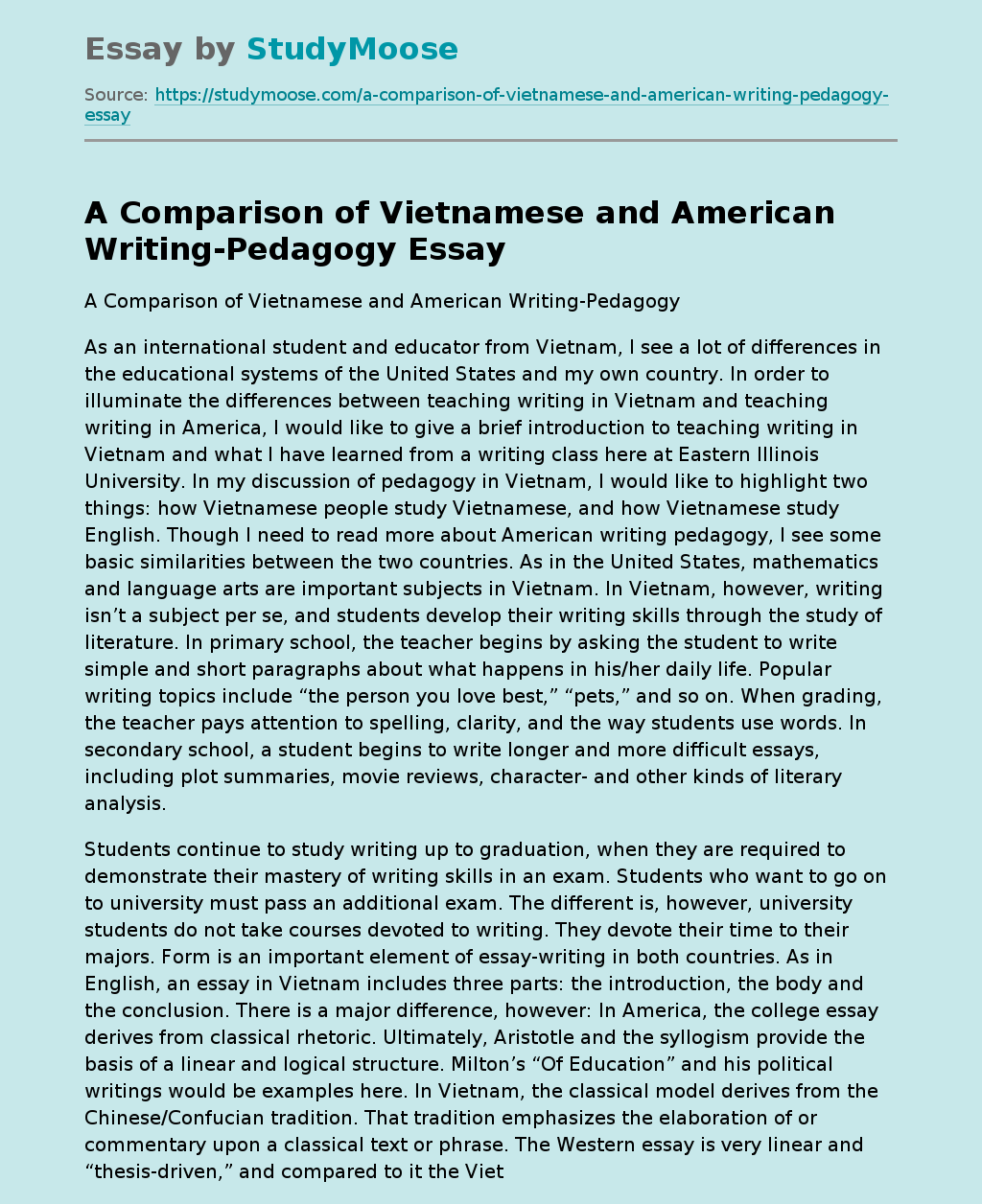