Some Problems in Vietnamese Education System

Education plays an important role with each country, especially with the economic development, which is the same in Vietnam. After two wars of aggression, the Vietnamese economy was affected seriously so the Provisional Government of Vietnam identified that at this time, the development of education is the first priority. In a country, if the rate of educated person is high, it means the indicators of economic development will also go up. The high quality workforce who is better skilled and trained in an accurate education will be a motivation for future growth.

Turn in your highest-quality paper
Get a qualified writer to help you with
“ Some Problems in Vietnamese Education System ”
Get high-quality paper
NEW! AI matching with writer

According the statistic data of Vietnam in recent years, the economy has had a remarkable performance. GDP growth increased 8. 5% in 2006, 8. 2% in 2007 and 8. 5% in 2009. Growth in 2010 is projected at 6. 5 percent according to the same source ( from The education in Vietnam, Christopher Runckel, www. Business-in-Asia. com). Education has the meaning with not only the development of economy but also the Vietnamese culture and society. It is seen as a progressive way and contributes to social reforms.

Therefore, the government of Vietnam has set the priority of education in terms of its budget. Many recent years, education occupies approximately 20% of all state budget expenditures and accounts for 5. 5% of GDP (source: Department of Finance and Planning, MOET, 2008). However, now, the Vietnamese education system has several serious problems that can make bad effects not only at present but even in the future, if the government don’t care and find the accurate solutions to improve in time.

At this time, the journals and the channels of information usually mention to three problems which is considerate the most prominent than the others are the degradation of quality in the education and training, the corruption and the violence in school.

These problems are puzzling the Vietnamese educate managers who making attempt to improve the current situation. The first problem is degradation of quality in the education and training which is most dangerous because it can affect badly the quality of human resources.

The degradation derives from many reasons such as the shortage of school material, the curriculum more theory than practice, a lecturer-centered method of teaching and learning … Beginning with the education for children in the nursery and the primary school, under the regulations promulgated by The Ministry of Education and Training (MOET), there must not be more than 35 students in every class which must be taken care by two teachers.

In general, each nursery class always has the number of pupils over the limit even there are classes that have 50-70 pupils, especially in big cities such as Ha Noi, Ho Chi Minh. With this situation, many nursery teachers expressed that they had to work hard and get stressful and strenuous because of the overloading classes. They were always worried about accidents which may happen to the kids, especially at lunch time or break time (from: Nursery school getting more and more overloaded, Tien Phong, www. sunflowermission. org). Obviously, this situation must be eliminated as soon as possible.

Dang Huynh Mai, Vice President of Vietnam Association for Protection of Children’s Rights said that it can be seen the existence of the classes that have the numbers of students exceeding the limits as an action that violates the children’s rights and the kids need to enjoy a better care and learning environment. Besides, the current curriculum is not appropriate though it has been reform several times before. Many parents who have their kids in the primary school complained that because of the heavy curriculum, they had to hire tutors to give extra lessons to their children. from: Heavy primary education curricula make parents worried sick, www. sunflowermission. org).

The education and training in universities and training schools has also similar situation. At this time, most the private universities in Vietnam build the model of teaching in a large lecture room with 200 students and only one lecturer. From reasons which are mentioned above, as a result, the quality of current workforce has been affected. According to the General Statistics Office GSO, in 2009, the number of trained laborers just amounted to less than 1/5 of the total labor force, and only 17. percent of laborers aged 15 and higher went through technical training courses.

Or the US Ambassador to Vietnam – Michael Michalak commented on an article in 2008: Universities were not able to produce the number of educated managers and skilled workers needed by Vietnam’s modernizing economy, which is a failure in Vietnam’s educational system. Lack of qualified human resources is the single biggest factor limiting Vietnam’s future development and economic growth. In short, the derogation of quality in education and training is big issue which needs to care and solve now.

The second problem is the corruption in Vietnamese education which can be seen as a danger for social moral. In overview, the average annual salary of teacher in Vietnam is approximately 19. 2 million dong which can be seen as rather low when comparing with 14 other countries in the Asia Region (from: Vietnam: education financing, World Bank). The low income likes a catalytic factor for the disease spreading corruption. According the study of Dennis C. McCornac, associate professor of economics at Anne Arundel Community College, corruption in Vietnamese education is pervasive, particularly regarding student and teacher behavior.

Bribes for school entrance, exam and assessment are just a few examples of practices in both secondary and higher education sectors. In addition, Prof McCornac conducted an informal survey of classes, more than 95 percent of students reported they had cheated at least once in a class and all had observed situations of cheating by other students. Cheating is looked at as being so common, many people involved who think that social and peer pressure play a significant role in the decision to cheat. Therefore, there is no doubt that the Vietnamese education system is in need of policies to against the corruption.

In the conclusion of Prof McCornac, he said that corruption was epidemic, and actions had to be taken to change the environment in which these practices flourish. The third problem is school violence, this is now a big problem in Vietnam education and we still need to find some better solutions. However, there must be reason for all problems. Therefore, we need to find what stands behind this. There exist many possible reasons which come from 3 main sources: family, public (included school) and themselves. All of these are just some remarkable reasons of school violence.

This problem is extremely serious, the emergency bell is ringing. Typing “school violence” on Google, the searching tool will show 2,160,000 links connecting to the stories about school violence. In HCM City, in April 2010, the city’s education and training department organized a seminar on combating school violence. At the seminar, Huynh Cong Minh, Director of the education and training department, admitted that though school violence has been existing for a long time, recently the number of cases and the seriousness of the cases have sharply increased (from: Gang fights becoming obsession in schools, www. sunflowermission. org).

Considering the effects of this problem, Deputy Minister of Education and Training Tran Quang Quy said MOET has been applying comprehensive measures in an effort to stop school violence. With three serious problems above, the Vietnamese education system need to improve as soon as possible. The top leaders of Vietnam recognized these problems and following direction of The Prime Minister Nguyen Tan Dung, Nguyen Thien Nhan, Deputy Prime Minister, concurrently Minister of Education and Training, and a Fulbright scholar has designed an ambitious program to restructure the national educational system and address its grave deficiencies in 2008.

According the study of Michael Michalak – U. S. Ambassador to Vietnam, some notable policies in the plan of Deputy Prime Minister Nguyen Thien Nhan are completing the universalization of education, innovation the training programs for teacher, overhauling the national curricula for all subjects at all levels, establishing internationally recognized universities and improving quality standards for teachers through continuing education and competition.

Besides that, Vietnam needs the collaboration with foreign countries to developing the education system such as America, Australia, England, Russia… For instance, in the recent meeting with Ambassador Michalak, Minister Nguyen Thien Nhan has specially requested American Government in two main factors: Founding an American university in Vietnam and Training 2,500 Vietnamese Ph. D. s in the U. S. by 2020. With problem of corruption, The Ministry of Education and Training needs to establish a strict management system.

As the conclusion of Prof Dennis C. McCornac in his study, he said “If Vietnam desires to obtain an international standard education system, required reforms are necessary. Perhaps, most importantly, there must be a monumental change in the attitude and thinking by students, faculty and parents. ” (from: Corruption in Vietnamese higher education, Dennis C. McCornac).

The school violence is happening extremely complex, current solutions for this situation are improving the interaction between the teachers and students, ensuring an equal environment in learning, making eaching and learning processes active and child-centred, supporting a curriculum that instills in children respect for others, raising awareness of parents on positive discipline and appropriate interaction from parents to their child, advocating for active participation of children and their parents in school affairs, enhancing the capacity of school principals and head teachers to ensure the environment in school is friendly and the last is enhancing the involvement of inspectors and local education authorities.

Those are eight key areas for plan making schools free from violence which is called The Octagon framework of Myrna Evora – regional director, Plan Asia in her article about clear solutions to violence. In overview, the education with Vietnam is an important factor and as a face of our country with the world which brings to people knowledge and awareness. It will be extremely proud if our country has the progress education and the developing economy.

The government always devotes all priorities for education because the high quality of workforce derives from the accurate educated orientation and with the trained human resources will contribute to the development of country. Day by day, many problems in Vietnamese education system appear that can cause many bad effects, even worse, the level of impact will become more and more serious if the managers of education have no solutions in time. Therefore, the government and the leaders in the education need to make more efforts to control each step of education and improve it to get better.

Some Problems in Vietnamese Education System. (2017, Feb 10). Retrieved from https://studymoose.com/some-problems-in-vietnamese-education-system-essay 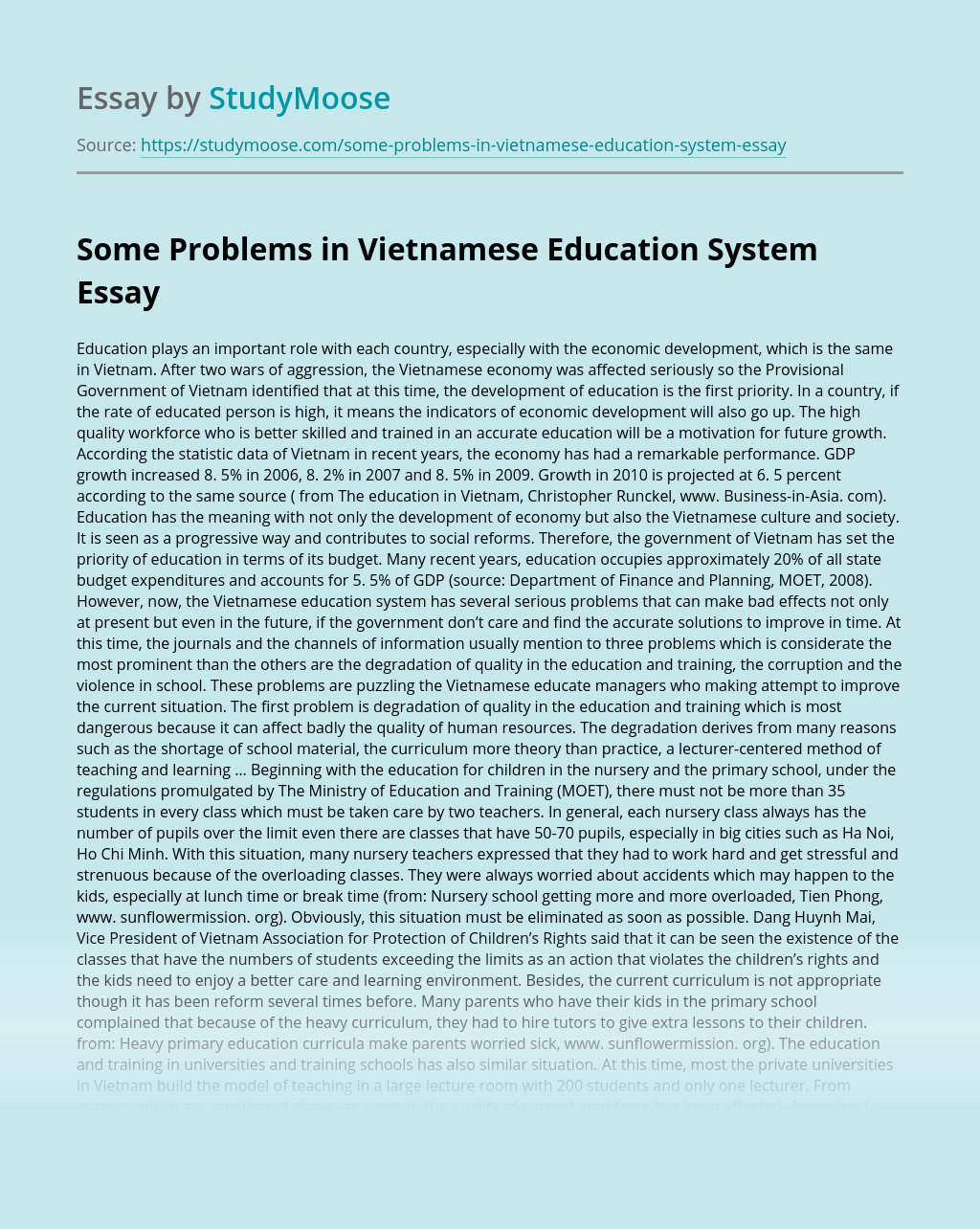 Turn in your highest-quality paper
Get a qualified writer to help you with
“ Some Problems in Vietnamese Education System ”
Get high-quality paper
Helping students since 2015
Stay Safe, Stay Original