Classical School of Criminology: Definitions of some terminology

The Classical School of Criminology emerged during the period of Enlightenment and was to become an important role player in the scientific study of Criminology. The Classical School of thought offered the first naturalistic explanation of crime and basic ideas about crime and a criminal justice system were developed. (Bezuidenhoud, 2013, p. 126) The Classical school and its proponents left a legacy which can be seen in the Constitutions of many countries (including South Africa) and form the basis and foundation of many laws and Criminological theories.

Don't use plagiarized sources. Get your custom essay on
“ Classical School of Criminology: Definitions of some terminology ”
Get custom paper
NEW! smart matching with writer

Here following is a discussion on three (3) of the concepts (Hedonism, Death Penalty and Deterrence) as introduced by the Classical School but with particular attention paid to how these concepts form a part of modern day Criminology and how the current concepts can be improved upon in South African Law.

Hedonism
The concept of Hedonism is grounded in several scientific fields of study. In Psychology the definition for Hedonism is given as: “the theory that conduct and especially all human behaviour are fundamentally motivated by the pursuit of pleasure or the avoidance of pain”.

Jeremy Bentham in his book Principles of Morals and Legislation (1789) defines Hedonism as “A doctrine with the central tenet that the achievement of pleasure or happiness is the main goal of life. (Bentham, Jeremy, (1988), Chap 5)

The word ‘hedonism’ comes from the ancient Greek for ‘pleasure’. Psychological or motivational hedonism claims that only pleasure or pain motivates us.

Ethical or evaluative hedonism claims that only pleasure has worth or value and only pain or displeasure has disvalue or the opposite of worth. Jeremy Bentham asserted both psychological and ethical hedonism with the first two sentences of his book An Introduction to the Principles of Morals and Legislation: “Nature has placed mankind under the governance of two sovereign masters, pain, and pleasure. It is for them alone to point out what we ought to do, as well as to determine what we shall do”. Debate about hedonism was a feature too of many centuries before Bentham, and this has also continued after him. (Bentham, Jeremy, (1988), Chap 1)

In layman’s terms Hedonism implies that every human has the inborn desire and compulsion to weigh pleasure and pain up against each other and ultimately choose to go for the pleasure option. Therefore laws should be formulated in such a way that, bearing in mind the innate desires for pleasure, man will be curtailed by ”pain”. Any person should be able to weigh the pleasure to be gained by an illegal act against the punishment (pain) decreed by law and subsequently to decide against the act. (Philips, A.R., (2014), Slide 19)

In modern-day South Africa nothing seems to have changed. It is merely the forms of pleasure and pain that have evolved due to the technological changes since the 18th century. The search for pleasure has become more powerful with all citizens; society in general and government aiming at gaining “pleasure” sometimes at any cost. The ordinary citizen sees the level of luxury of the “haves” and will consider anything to be able to experience the same level of pleasure. Furthermore, certain promises were made 20 years ago when the country moved from apartheid to democracy. Although huge strides have been made there has been a definite widening of the gap between the “haves” and the “have-nots”. Simplistically crime has evolved into the one sector of the poor turning them to crime to achieve a level of survival (those who have experienced no or very little improvement in their lives) while another sector is driven to crime purely by greed. The desire for fast, easy money through crimes such as drugs and prostitution.

Death Penalty
Cesare Beccaria (1738-1794) together with Jeremy Bentham (1748-1832) was considered to be the most influencial during the Classical School period. Beccaria famously writing mostly about Deterrence as prevention of crime and Punishment should fit the crime Beccaria also called for the abolition of capital punishment. He offered three Main arguments: first, that the death penalty is not useful within a rational and well-ordered Criminal justice system; second that capital punishment is illegitimate under a social Contractarian theory of political obligation; and, third, that the irrevocable nature of the death Penalty is incompatible with the fallible human judgments that are necessarily involved in Capital punishment.

Every time a remarkable crime occurs – remarkable either because of the fame of the victim or the extraordinary brutality of the act – there are people calling for a debate on the restoration of the death penalty in South Africa; for the protection of good people, children, and the whole of society against monsters. When it comes to death penalty the Constitution of South Africa is very clear too; there are three basic rights entrenched in the Bill of Rights which focuses on the unconstitutionality of state sanctioned murder. These rights are: the right to life, the right to freedom and security of the person and the right to dignity (SA Constitution, (1996), Section 12 (1)) The death penalty is a highly contentious issue which has been the subject of much debate, writings and research.

Botswana still passes the Death sentence and is the country with the lowest crime rate. As stated in The Botswana travel Guide (2013) stated: “People in Botswana are very friendly and the crime rate is low.” Could the reason for this be that the Death sentence (an act of revenge) acts as Deterrence on a general level? This is a proverbial can of worms that I would definitely not like to open.

South Africa’s Death sentence history is a very murky one. About 3500 inmates were hung in the previous century. Of these were 130 whose only
crime was fighting for freedom for all South African citizens. (Is this the most ghoulish tourist attraction in the world? Gallows where 3500 were hanged declared a national, monument in South Africa, (2011, 15 December)

My personal view on the topic is that we should maintain the status quo for several reasons. 1. Being a Christian I believe in the Commandment “Thou shall not kill” 2. Killing a killer does not make is right.

3. The Death sentence is purely an act of revenge and serves no purpose as deterrence. One could however argue the point that Abortion (which is legalized in this country) is also murder. Murder of intent but once again another contentious issue.

Death sentencing, in my opinion, is barbaric, inhumane, and cruel and has no place in our modern society and Constitution.

Deterrence
According to the Classical school “the law was to protect the rights of both society and the individual, and its chief purpose was to deter criminal behaviour. Therefore Classical law emphasized moral responsibility and the duty of citizens to consider fully the consequences of behaviour before they acted….. The role of punishment, according to Bentham, in itself was evil and should be used only to exclude some greater evil. Thus, the only justification for punishment was Deterrence. The Classical school saw two forms of Deterrence: a specific or individual form and a general or societal form.” (Williams, P.W. and McShane, M.D., (2014), pg. 17)

In South Africa today our penal system makes provision for 3 aims of punishment: Retribution, deterrence and Rehabilitation.
All three aimed at providing peace, harmony and safety for all its citizens. Our Constitution leans more heavily towards Rehabilitation. All attempts are therefore made to ensure that the offender learns from his punishment and rehabilitates to become a productive member of our society. Deterrence is to my mind a positive way of dealing with offenders. If implemented correctly it can go a long way in leading to a better society. However there seems to be different rules for different people.

1. Schabir Shaik (Durban businessman and friend of President Jacob Zuma): On 8 June he was sentenced to 15 years’ imprisonment on each of the two counts of corruption, as well as 3 years on the count of fraud. The sentences will run concurrently, giving him an effective 15year prison term. On 3 March 2009 Shaik was released on medical parole, after serving two years and four months of his 15-year prison term. Since that time he has been seen regularly busy with activities which clearly refuted his alleged medical condition (Opposition slams release of Schabir Shaik, (2009, 3 March), p. 1) and Schabir Shaik’s parole paradise, 2010, 8 January, p.1)

2. Jackie Selebi (SA Police Commissioner): Selebi was found guilty of corruption on 2 July 2010 and sentenced to 15 years imprisonment on 3 August 2010. His appeal against his sentence was rejected by the Supreme Court of Appeal on 2 December 2011, after the court unanimously ruled against him. However, he was released on medical parole in July 2012. (Selebi guilty of corruption, (2010, 2 July), p. 1)

Tony Yengeni (South African politician): In 2004, Yengeni was convicted of defrauding parliament by accepting a discount on a luxury car during the tendering process for a controversial arms deal while he was the member of a parliamentary committee reporting on the same deal. The case against Michael Woerfel was withdrawn since Yengeni was found not guilty on the charges involving Woerfel. Yengeni entered Pollsmoor Prison near Cape Town on 24 August 2006, was immediately transferred to more modern Malmesbury prison, but was released on parole on 15 January 2007 — after completing a mere four months of the four-year sentence. ((Tony Yengeni. (n.d.). In Wikipedia.) Cases such as the three mentioned above, do not sit well with the South African citizens. Such cases make people suspicious and negative towards our legal system. They do very little to act as a Deterrence since citizens believe that you will only receive fair treatment if you are somebody important.

One could argue that the Classical School was extremely radical regarding the rights of criminals and working tirelessly at proving that criminals were forced into crime by various internal and external factors because of the appalling circumstances and inhumane punishments that went on in the centuries prior to the enlightenment. They could seem to have had an axe to grind and wrote prolifically on the topic.

What can however not be disputed is that they were very forward in their thinking and set the stage for many reforms to take place in the penal system. The value of their proposals is proven by the number of countries that have entrenched in their constitutions many of the changes advocated by the writers of the Classical School.

Classical School of Criminology: Definitions of some terminology. (2016, Mar 06). Retrieved from https://studymoose.com/classical-school-of-criminology-definitions-of-some-terminology-essay 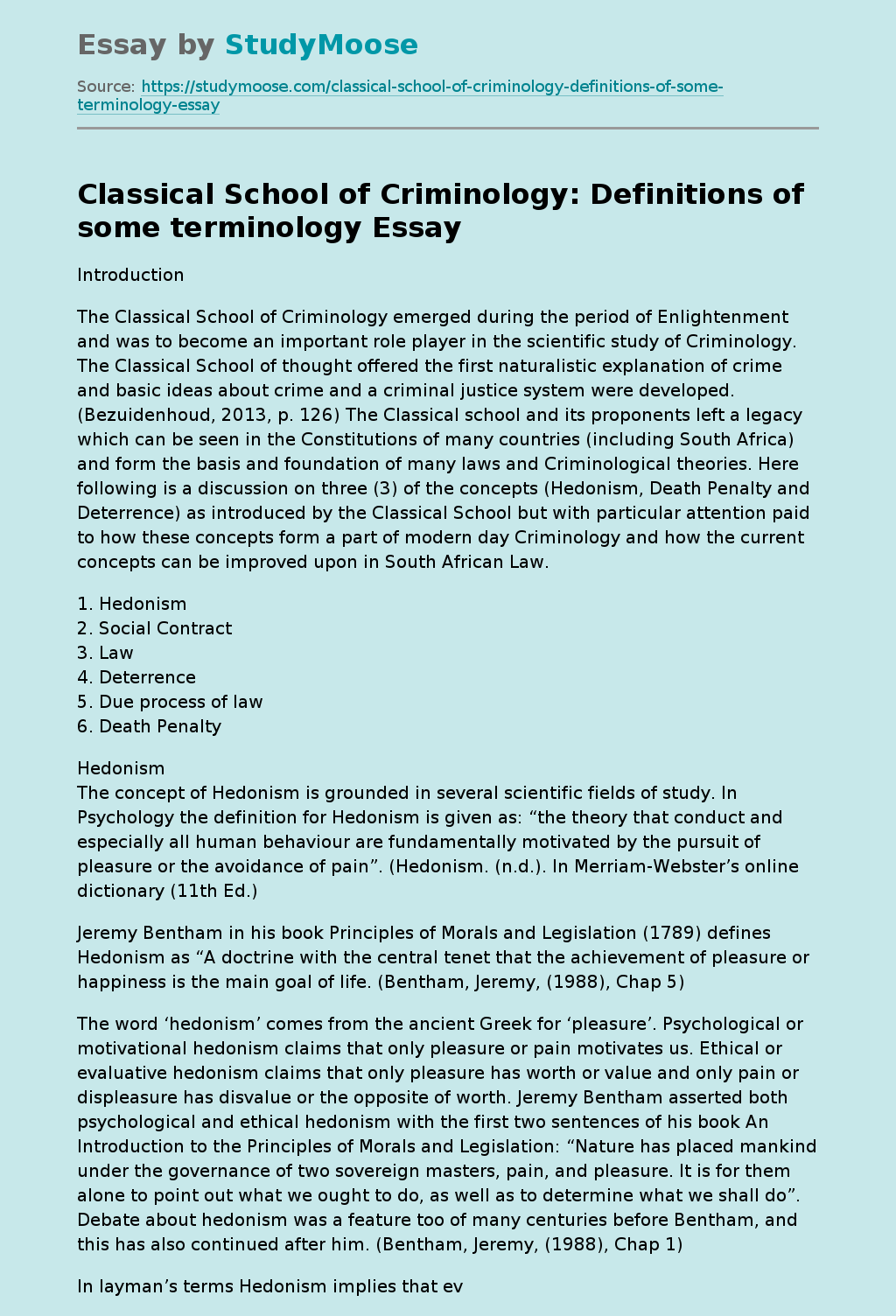