The causes of the French Revolution can be attributed to several intertwining factors: Cultural: The Enlightenment philosophy desacralized the authority of the monarchy and the Catholic Church, and promoted a new society based on reason instead of traditions essence of the revolutionary situation which existed in France in the 1780s was the bankruptcy of the king, and hence the state. This economic crisis was due to the rapidly increasing costs of government and to the overwhelming costs incurred by fighting two major wars: the Seven Years’ War and the American Revolutionary War.

Don't use plagiarized sources. Get your custom essay on
“ Causes of French Revolution: Political, Social and Economic Causes ”
Get custom paper
NEW! smart matching with writer

[4] These costs could not be met from the usual sources of state revenue. Since the 1770s, several attempts by different ministers to introduce financial stability had failed.[5] The taxation system was burdensome upon the middle class and the more prosperous peasants, given that the nobles were largely able to exempt themselves from it. As a result, there was “an insistent demand” for reform of these abuses of privilege, for an equitable means of taxation, and for improved government processes.

[6] David Thomson argued that the bourgeoisie and peasantry had “something to lose, not merely something to gain” in their demands for a fairer society and this fear too was a major factor in the revolutionary situation.[7]

A growing number of the French citizenry had absorbed the ideas of “equality” and “freedom of the individual” as presented by Voltaire, Jean-Jacques Rousseau, Denis Diderot, and other philosophers and social theorists of the Age of Enlightenment.

[8] The American Revolution demonstrated that it was plausible for Enlightenment ideas about how a government should be organized to actually be put into practice. Some American diplomats, like Benjamin Franklin and Thomas Jefferson, had lived in Paris, where they consorted freely with members of the French intellectual class. Furthermore, contact between American revolutionaries and the French troops who served in North America helped spread revolutionary ideas to the French people.[9]

The Third Estate (commoners) carrying the First (clergy) and Second Estate (nobility) on his back. The population of France in the 1780s was about 26 million, of whom 21 million lived in agriculture. Few of these owned enough land to support a family and most were forced to take on extra work as poorly paid laborers on larger farms. There were regional differences but, by and large, French peasants were generally better off than those in countries like Russia or Poland. Even so, hunger was a daily problem that became critical in years of poor harvest and the condition of most French peasants was poor.[10]

The fundamental issue of poverty was aggravated by social inequality as all peasants were liable to pay taxes, from which the nobility could claim immunity, and feudal dues payable to a local seigneur or lord. 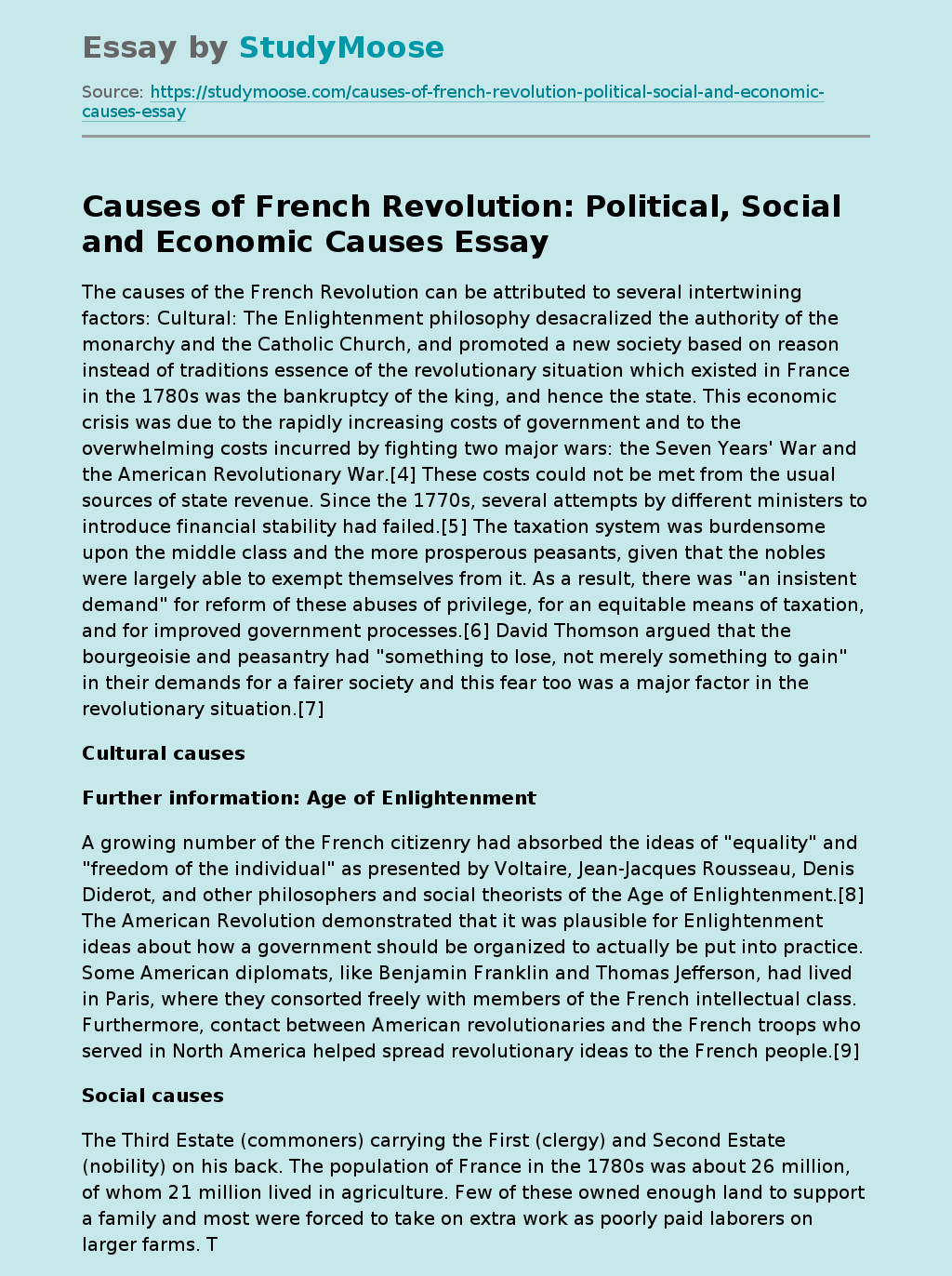