Causes of the French Revolution DBQ

The late 1700’s were a period of great social and political revolution in Western civilization. The French Revolution was a major part of this sweeping change in the way Europeans (and the newborn Americans) perceived the function of government and the most effective ways of governing. The French Revolution had many long term and short term causes and effects, and was one of the most violent periods in the history of the country. There were many factors that contributed to the spark of the revolution.

Don't use plagiarized sources. Get your custom essay on
“ Causes of the French Revolution DBQ ”
Get custom paper
NEW! smart matching with writer

There were three main causes of the French Revolution: gross mishandling of governing duties and incompetence in the leadership of King Louis XVI and Marie Antoinette, the large and very unjust social and economic gap between the first two privileged estates and the poor third estate, and finally the revolutionary ideas of the enlightenment and their influence on the philosophies of the people.

Louis XVI was one of the most incompetent and frankly idiotic rulers in the history of France.

He would have absolutely nothing to do with his official duties as king, and his horribly decadent lifestyle contributed greatly to the economic plight France was in. The fact that he was married to Marie Antoinette, a native of Austria, France’s sworn enemy, was very detrimental as well. Louis XVI inherited debt from previous rulers, but he made no move of any kind toward paying it off. In fact, he borrowed vast sums of money in order to give aid to the Americans in their revolution, which only worsened France’s already outstanding deficit.

In 1786, bankers refused to lend the government any more money, and Louis XVI was in serious trouble. Of course, all of this put Louis in a highly unfavorable position with the people of France, who absolutely despised him and his wife. Marie Antoinette was a major problem for Louis as well.

She gave him poor advice on governing matters, spent large amounts of money on her own vanity, and was generally hated by the people the moment she set foot in France. Louis was a serial procrastinator. He put off dealing with economic troubles until it was essentially too late, and the people were completely fed up. He was finally forced to resort to taxing the nobility, which spelled the end of Louis’s reign, as the Estates-General that he called-the first in 175 years-to deal with the problem was the first step of the revolution. It is also ironic that the American Revolution (which Louis supported) was a major factor to the downfall of the monarchy, as suggested by Lord Acton, “…The American example caused the (French) Revolution to break out…”(doc. 5).

All throughout human history, the wealthy have always been the minority. They have been completely deaf to the voices of the majority of people, who tend to be very poor. France in the late 1700’s was no exception. The social hierarchy of the country was divided into three classes, or estates. The first estate was made up of the clergy, and was the smallest and wealthiest class, consisting of only 1% of France’s population. The second estate was made up of nobles, and consisted of about 2% of France’s population. These two estates combined, making up only 3% of the population of France, owned nearly half of the land in France (doc. 2)! The third estate was made up of the middle class(or the bourgeoisie), peasants, and city workers and was the overwhelming majority of the people.

They only owned about half of the land, however, and had almost no say in government whatsoever. Of course, the burden of taxes was placed squarely on the shoulders of the third estate, while the first and second estates paid essentially nothing. The outrageous amount of taxes like the taille, or a tax on the land and its produce, caused many people in the third estate to live with almost nothing and in filthy conditions, as observed by Arthur Young who traveled through France from 1787 to 1789, “The poor people seem very poor indeed. The children are terribly ragged….The lack of bread is terrible…The price of bread has risen above the people’s ability to pay. This causes great misery,”(doc. 3). It would not be long before the people had had enough and great change was demanded.

The Enlightenment was the third major factor in the French Revolution. Before the ideas of the philosophes became widespread, the monarchy and old ways of thinking were not questioned. It was just tradition and people knew not to question tradition. Then thinkers like Voltaire, Rousseau, and Locke came along and changed everything. John Locke was probably the most important and influential philosophe. His idea about natural rights (life, liberty, and property) being totally unalienable stirred the French people. They realized that they deserved much better than their positions in life. Of course, the bourgeoisie were the first to accept these revolutionary ideas, since they were the most educated and probably the only portion of the third estate who could read, as pointed out by historian Albert Mathiez, “The middle class…was sensitive to their inferior legal position.

The Revolution came from them-the middle class. The working classes were incapable of starting or controlling the Revolution. They were just beginning to learn to read,”(doc. 4). The ideas of Voltaire, who believed in the right of free speech for everyone, also figured greatly in the revolutionary thoughts of the third estate. The people were angry that their opinions were being suppressed by the corrupt government. The Comte D’Antraigues, a friend of Rousseau, said about the ideas of the people, “The Third Estate is the People and the People is the Foundation of the State; it is in fact the State itself; the…People is everything. Everything should be subordinated to it…It is in the People that all national power resides and for the People that all states exist.” The revolutionary seed was planted in the mind of the French people by the ideas of the philosophes.

The French Revolution had three major causes: the incompetence of Louis XVI, the vast gap between the rich and poor in France, and the revolutionary ideas of the Enlightenment. Once Louis called the infamous Estates-General of May 5, 1789, a revolution began when the third estate created the National Assembly to create reforms in the name of the people. Three days later, the Third Estate was locked out, so they broke into a tennis court and created a new constitution. This was the spark the ignited the revolution, and the beginning of a whole new era in the history of France.

Causes of the French Revolution DBQ. (2016, Jul 21). Retrieved from http://studymoose.com/causes-of-the-french-revolution-dbq-essay 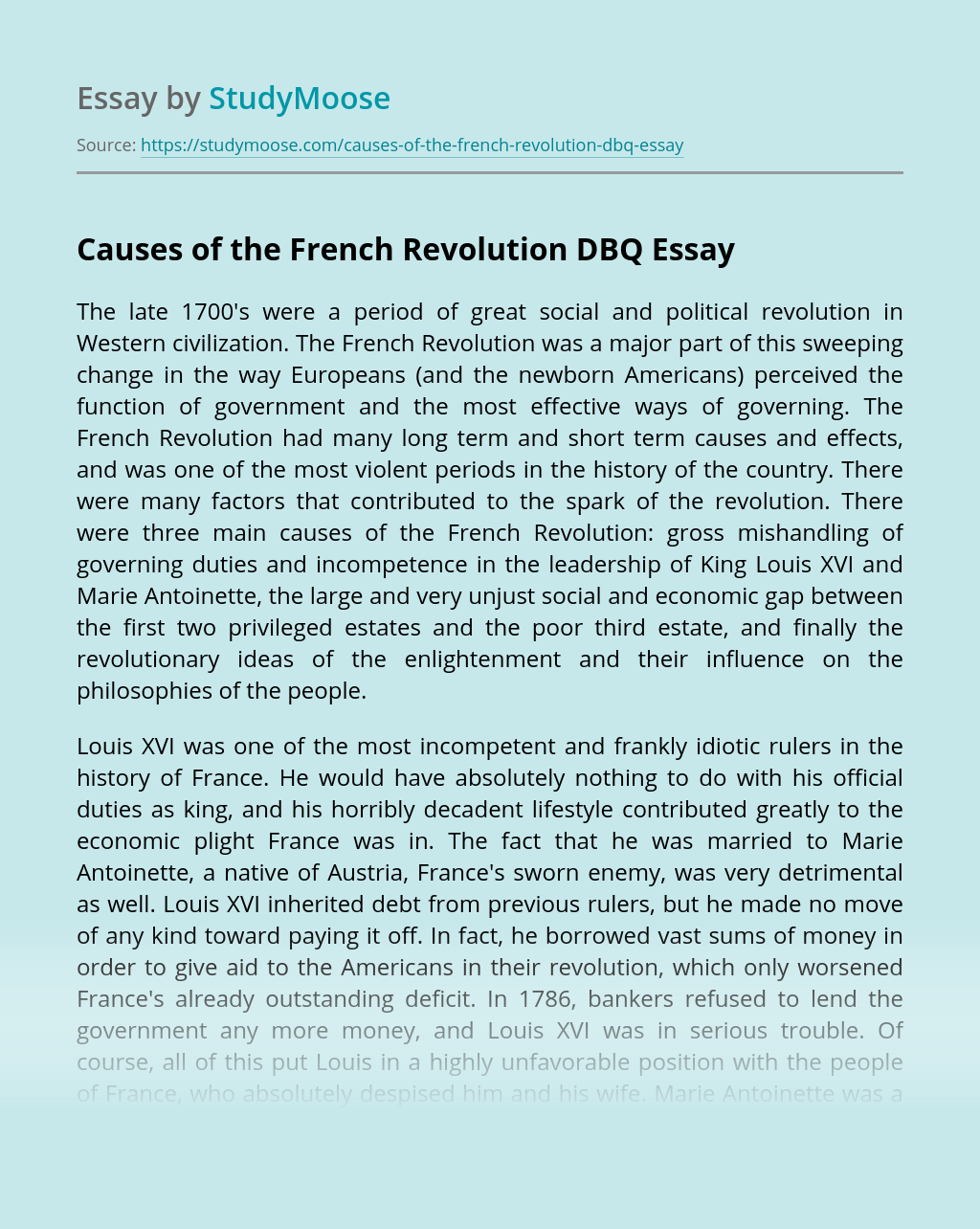