For many years, throughout the 17th century and 18th century, Britain maintained a neutral relationship with its American colonies. By upholding salutary neglect, the British policy of avoiding strict enforcement of parliamentary laws, the American colonies remained obedient to Britain. However, after the French and Indian War (1754-1763), Britain’s relations with its colonist were drastically altered. The war greatly damaged Britain’s economy and because of its pyrrhic victory, a series of taxes were implemented on the American colonists. The unfair taxation ideologically changed the Americans’ views on Britain and they felt they were not represented in Parliament.

Turn in your highest-quality paper
Get a qualified writer to help you with
“ French and Indian War DBQ ”
Get high-quality paper
NEW! AI matching with writer

The French and Indian war altered the relations between Britain and its American colonists politically by giving Britain control of the east, economically by putting Britain in extreme debt and compelling Parliament to impose taxes on its colonists, and ideologically by shifting the colonists’ loyalty towards rebellion against Britain.

The French defeat in the war paved way to the expansion of British territory throughout the eastern coastline (Document A).

The colonists began to settle on the land beyond the Appalachian Mountains, which resulted in tensions with the Natives who primarily resided there. Canassatego, chief of the Onondaga Nation of the Iroquois Confederacy, delivered a speech to the representatives of Pennsylvania, Maryland, and Virginia. In the speech, he speaks with an accusatory tone as he is angered by the unrightfully settling of the American colonists (Document B). He sees the white settlers as people who spoil his hunting and addresses to the representatives that they know the colonists have no right to settle in the Natives’ land.

Because of this speech and Pontiac’s Rebellion, Britain was forced to implement the Proclamation Line of 1763, which prevented American settlers from moving past the Appalachian Mountains. Generally, this angered the settlers because they believed they deserved the land due to their service in the war. This was an initial step to the Americans’ shift of ideology to rebellion.

At the end of the war, Britain’s economy rapidly declined and it struggled to pay its war debts. As a means to solve this issue, it enforced a series of acts on the American colonists. A British Order in Council of 1763 concluded that the current revenue from the colonies was not sufficient to pay a fourth of the cost to collect it (Document F). It deemed it necessary to impose the controversial Stamp Act, a tax on all paper goods. The council speaks with concern as it stresses the income from the colonies is not nearly enough to relieve the debt. The council, however, only looks from Parliament’s view of needing to relieve the debt rather than the colonists’ view of unfair taxation. Colonists began to organize protests, chanting “No taxation without representation” as their slogan.

On August 9, 1765, Benjamin Franklin wrote a letter to a close ally, John Hughes. In the letter, Franklin informs his friend of the uncertainty of the removal of the Stamp Act. Though he says it would be wise to stay loyal to Britain because if they were caught talking about expelling an act, they would be tried with treason (Document G). Franklin’s point of view is prudent because he cares for the future of him and his ally. He goes on to tell Hughes if he attempts to repel the act, his traits will always be remembered by the colonists. Another tax implemented by the British was the Sugar Act, which added a three cents tax and sales tax on sugar, a high value commodity. The series of taxes provoked the American colonists to boycott all British goods. The boycott severely weakened the already damaged economy of Britain.

As colonial unity was formed within the boycott, colonial ideological values differed tremendously after the war. Colonists were already filled with resentment due to the Proclamation Line of 1763 and the taxation caused Britain’s and the colonists’ relationship to decline further. 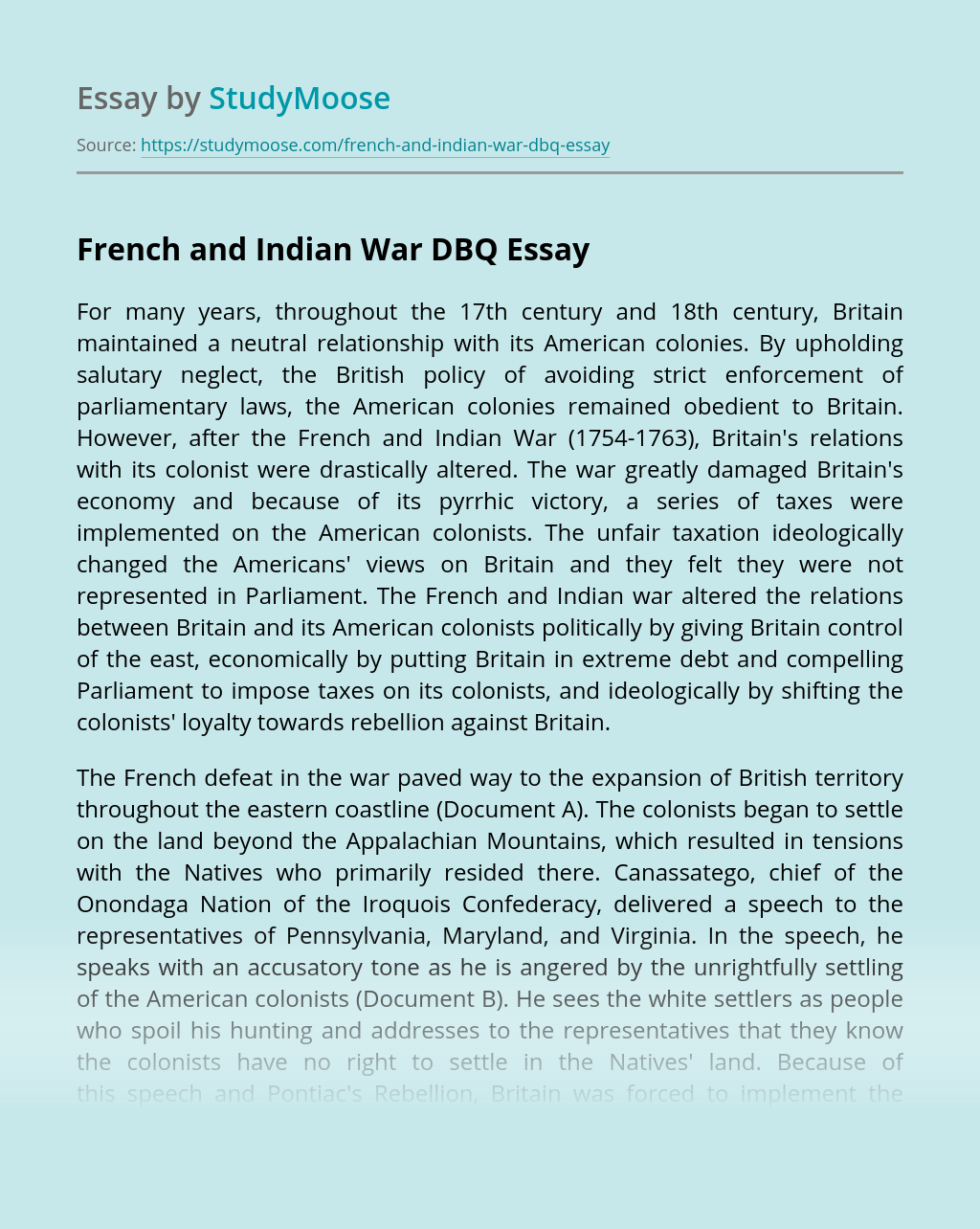 Turn in your highest-quality paper
Get a qualified writer to help you with
“ French and Indian War DBQ ”
Get high-quality paper
Helping students since 2015
Stay Safe, Stay Original