The French and Indian War

Prior to 1754 French & Indian War, the 13 North American colonies that would eventually become the United States of America were at a rate of rapid increase. Colonial trade with England has increased by over 360%, all colonies were reproducing successfully, with a rate of natural increase of 3%, and the population doubling every 25 years, and on top of that, colonial power increased with the idea of Salutary Neglect, and colonial assemblies. The French & Indian War had cause a multitude of changes and shifts in America, on political, economical, and ideological levels alike.

Don't use plagiarized sources. Get your custom essay on
“ The French and Indian War ”
Get custom paper
NEW! smart matching with writer

For a start, the French and Indian War altered the political aspects of the 13 colonies. Prior to the French & Indian War, due to the idea that it was beneficial or healthy for the 13 colonies if they had some sense of freedom, independence and self-governance, this was dubbed Salutary Neglect. The main form of political governance in the colonies was the colonial assemblies.

These assemblies were responsible for governing their respective colonies through city courts.

These courts would make decisions that pertained to each of the colonies, like appointing members to the unicameral and bicameral assemblies. Building on this knowledge, after the war ended in 1763, with the Treaty of Paris 1763, one of the main consequences was the end of Salutary Neglect. Most colonial assemblies were shut down as a result of this, giving the colonial Royal governors more power than they previously had. Another consequence of the Treaty of Paris 1763 was the French losing every last bit of their land in North America (Doc.

Before the beginning of the French & Indian War, Britain didn’t have any major taxes imposed onto the colonies. That was before the war. After the French & Indian War was fought, and the Treaty of Paris 1763 signed, the Stamp Act was imposed in 1765 by George III to help pay for the deficit created by the French & Indian War, as well as King George’s War (1739-1748). This act was passed as a result of Britain needing more revenue, as for the revenue coming from the colonies prior to this act was “not yet sufficient to defray a fourth part of the expense necessary for collecting it.”(Doc. F). The Stamp Act, mind you, wasn’t a tax on stamps, but rather a tax on printed documents, such as newspapers, journals, deeds, letters, et cetera. The Stamp Act required all printed documents to be stamped with a special imprint, which certified the document. Failure to do so would most likely result in a fine, or confiscation of the merchandise, which is why it faced so much opposition from the colonists, even though it only affected a certain few.

Benjamin Franklin wrote a letter, addressed to John Hughes in Pennsylvania, suggesting the repealing of the Stamp Act (Doc. G). If he refused to repeal the Stamp Act, Franklin warned him that it would make him very unpopular among the colonists, and refuted that he should try to reconcile the colonists after the war, instead of taxing them. Benjamin Franklin truly feared violent opposition to the Stamp Act. This eventually led to the Stamp Act crisis, which resulted in Liberty Trees being planted. At these liberty trees, officials sent to collect taxes in more severe cases were tarred and feathered as a form of public humiliation. The Virginia Resolves were also passed as a result of the Stamp Acts, which claimed it as unconstitutional, and they could not be taxed without representation in Parliament. This type of violent opposition led to the repealing of the Stamp Act in 1766, and the passing of the Declatory Act in 1766 which gave Britain the right to make laws for the colonies.

This concept is called parliamentary sovereignty, and went against the right of consent of the governed, and the colonist’s natural rights of life, liberty, and property, or alternatively, the pursuit of happiness. The British also assumed the colonists Virtual Representation. This is the idea that the colonies were represented in Parliament indirectly. Also, before the French & Indian War ended with the Treaty of Paris 1763, which resulted in the Proclamation Line of 1763, which ran from the West of the Appalachian Mountains to England, Native Americans were getting defensive about their land, and warned the colonists to remove themselves from their area, as for they had no right to settle (Doc. B). The Chief of the Iroquois Confederacy, Canassatego, told the representative bodies in Pennsylvania, Maryland, and Virginia that basically, their motives are transparent, and the Native Americans knew the value of their land and instructed the representatives to promptly remove their men from their land (even though it wasn’t rightfully theirs) because they had no right to settle, and they felt greatly disrespected.

After the war ended with the Treaty of Paris of 1763, the Proclamation Line was drawn to prevent all British colonists from settling West of the Appalachian Mountains to prevent all future tensions with the Native Americans, even though proceeding the war, a large deal of their land was already lost. The war ultimately created economic stress in the colonies, because it resulted in more taxes (Doc. F), and isolated trade with the Native Americans, as for we usually traded fur pelts with them. This also could’ve foreshadowed their refusal to join the colonists in an alliance during the Albany Plan of 1754, as well the problem of westward expansion with Chief Pontiac’s Rebellion in 1763, which resulted in the senseless murder of thousands of British colonists. Adding on to other economic problems created by the war, the mercantile policies of the Navigation Acts were beginning to become heavily enforced again.

England buckled down on the colonies to raise revenue (Doc. F.). This put a major halt on smuggling of goods to the 13 colonies. With the passing of the Writs of Assistance, the quartering British soldiers had a right to enter a colonist’s home at anytime and confiscate anything they suspected of being smuggled. Smuggled good were rarely found, but it enraged the colonists that the British had a right to do this on their land. To initiate the final point, are the altered ideological aspects that were altered as a result of the French & Indian War. Preceding the French and Indian War, some of the colonists were sycophant to Britain. During the war, in 1755, George Washington wrote a letter to Robert Orne, wishing to join the militia. He was eager to serve under General Braddock, who would soon bring on the humiliating defeat during the failed capture of Fort Duquesne (Doc. C). George Washington’s loyalty and respect for Britain would soon change, like many other colonists ideological values about their “mother country.”

Sources like the Massachusetts soldier’s diary dated 1759 proved British to be neglectful of their soldiers. The people who were once eager to serve under Britain now wanted out. The British Parliament refused to supply proper winter clothes, and liquor. To him, this is being denied “Englishmen’s Liberty.” The soldiers were not allowed to leave, so they may as well have been slaves at that point. (Doc. D). That’s just one ideological value changed as a result of the French & Indian War. As I said before, many colonists thought highly of Britain as a mother country, with over 60,000 loyalists living the colonies, until the French & Indian War. Rev. Thomas Banard’s sermon in 1763 praised Britain in an usually optimistic way. He assumed the end of the war meant the colonist’s could be free and happy. No animosity could be sensed towards Britain. (Doc. E.) That was until the British decided to tax the colonists to increase revenue. (Doc. F.).

That resulted in the Stamp Act, which as you know, was every controversial and lead to violent oppositions, riots, and acts like the Virginia Resolves. Benjamin Franklin warned Parliament to repeal the Stamp Act before any of this opposition took place (Doc. G). In October 1765, on a new paper masthead was a very iconic image. There was a skull and crossbones stating “The TIMES are Dreadful, Doleful, Dismal, Dolorous, and DOLLAR-LESS.” It also read “Adieu Adieu to LIBERTY” which can be translated to “Goodbye to Liberty.” (Doc. H). Mind you, these are the same colonies that kissed up to Britain before the war. Acts in the same nature of the Stamp Act faced opposition of this sort. This substantiates the evident shifting and altering of ideological values that resulted from the French & Indian war.

In final analysis of this essay, one may think that the French and Indian war heavily altered the relationship between Britain and the American colonies. They’re right. The French & Indian changed the relationship on a economical, political, and an ideological basis. The politics were changed during the disbanding of the colonial assemblies, doing away with of Salutary Neglect and the French losing all their territory as a result of the Treaty of Paris 1763, the economical situation was pressed one, with the Navigation Acts now being heavily enforced, cutting down on smuggling, with the new taxes on top of that, and isolated trade with the Native Americans and Britain, and most definitely on an ideological level, seeing the major shift of emotion and feelings towards Britain after the war, from optimistic, loyal, and respectful, to slandering them in a hostile manner. The tensions created by this war, and the abandoning of the debt on the colonist’s foreshadowing the heavy colonial resistance that was to come, that would blossom into the American Revolution.

The French and Indian War. (2016, Sep 30). Retrieved from http://studymoose.com/the-french-and-indian-war-essay 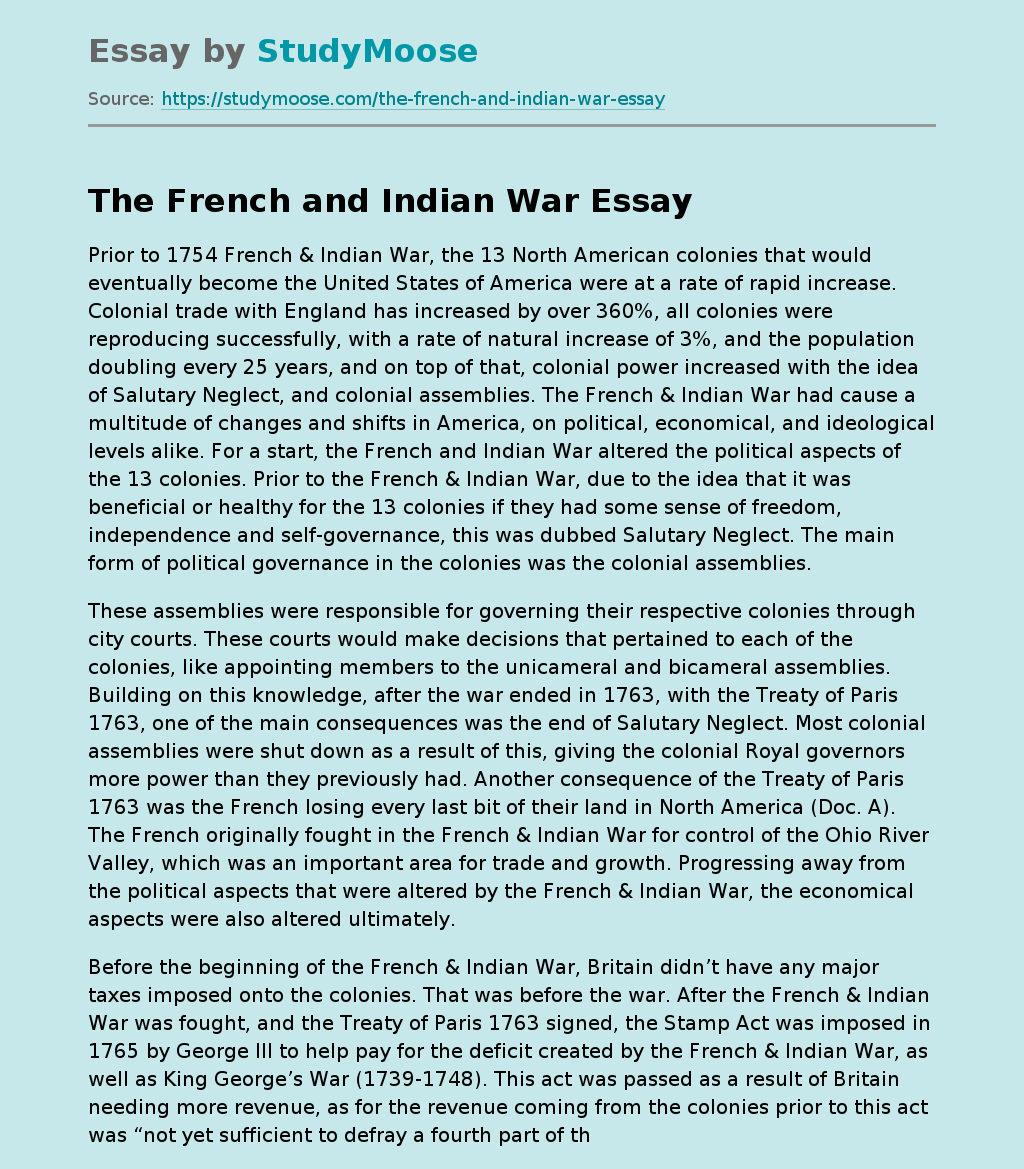