Comparing The Haitian To The French Revolution

Haiti, known as Saint-Domingue before the revolution, it was the richest colony in the Americas in 1789. Almost half a million slaves toiled on its sugar, coffee, indigo, and cotton plantations. More than thirty thousand new African slaves arrived each year, both to replace the many that died of overwork or disease and also to fuel the rapid economic expansion that the colony experienced in the 1780s. Before the French revolution, the masters were, first of all, the King; after him, the nobles and clergy.

Don't use plagiarized sources. Get your custom essay on
“ Comparing The Haitian To The French Revolution ”
Get custom paper
NEW! smart matching with writer

From the King at the head to the poorest noble, they used their power badly. The rulers treated the ruled, the vast mass of the nation, as people created for their convenience, to supply them with money and to serve them. The King demanded great sums to provide armies for his wars, to surround himself with a brilliant and luxurious Court, to defray the expenses of government. As we go further in the French and Haitian revolution, they were both cruel and bloody, were there any significant similarities and differences? They both were spurred for similar reasons by oppressed people, but they were significantly different economically, very different leaders and events.

The causes for the French and Haitian revolutions were fairly uniform. An unfair distribution of power between social classes, restricted liberties and representation, and a large gap between the rich and the poor were the main catalysts for both revolutions. The social class situations of Haiti and France were main causes of both revolutions. Social mobility was nearly nonexistent in both societies.

The Haitian social class system was particularly stratified because it was based on race. The highest positions in the government and military were only held by Peninsulares. Peninsulares were individuals that were born in Europe and had come over to the colony to rule. Directly under the Peninsulares in the social class system were the Creoles. These individuals controlled most of the land and the business. Creoles were defined as individuals whose parents were both Peninsulares in the colonies. The next social classes were the Mestizo and the Mulattoes, who were half European and half Native American or African. Finally, all pure Africans or Natives were condemned to slavery. Slaves had no property, money, or rights. Most of the individuals in Haiti were slaves. Conversely, the French social system was also very stratified and consisted heavily of the lowest class. The system is broken down between three estates: the clergy, nobility, and the 3rd estate which consisted of a lower, middle and upper class. Most of the third estate consisted of peasants. The clergy encompassed one percent of the population. The one percent controlled twenty percent of the land and did not pay taxes. The 2nd estate encompassed the nobility, two percent of the population. The nobility owned twenty-five percent of the land and did not pay taxes. The remaining ninety-seven percent of France belonged to the third estate. The third estate held less than half the land in France and was forced to support the heavy burden of taxation in the bankrupt nation. The overwhelming gap between the political and economic power of the high and low classes caused resentment in both societies. A miniscule number of people, had privilege, comfort and luxury while the majority of people suffered. Social inequalities would a huge catalyst for both revolutions. The lowest class of each society realized their strength in numbers and passion for their cause. The 3rd estate broke free from France and created the Declaration of the Rights of Man. This document outlined a set of rights that pertained to every man from any class. From there, the 3rd estate moved forward in taking the country. The Haitian slaves utilized their massive population and excellent leadership to overthrow their oppressors. Toussaint Louverture was the leader of the revolution and a pivotal factor in defeating the Europeans. Significant overall economic differences were present between Haiti and France before the revolutions occurred.

France was nearly bankrupt by the time the revolution began. Wars with England and the American Revolution had been extremely costly for France. The nation was in debt and the social elite were not paying taxes to aid the dying economy. The large economic strain on France caused heavy taxation of the bottom social class. In contrast, the economy of Haiti was not a factor that fueled the revolution. The Haitian economy was thriving. Free labor from slaves created a surplus of goods. Also these two countries had two very different leaders leading the revolutions; the Haitian revolution leader Toussaint Louverture began his military career as a leader of the 1791 slave rebellion in the French colony of Saint Domingue. Initially allied with the Spaniards of neighboring Santo Domingo, Toussaint switched allegiance to the French when they abolished slavery. He gradually established control over the whole island, expelled British invaders and used political and military tactics to gain dominance over his rivals. Throughout his years in power, he worked to improve the economy and security of Saint Domingue. He restored the plantation system using paid labor, negotiated trade treaties with Britain and the United States and maintained a large and well-disciplined army. Whereas the French revolution leader Maximilien de Robespierre. Maximilien Marie Isidore de Robespierre was born in Arras on 6 May 1758, the son of a lawyer. He was educated in Paris and entered the same profession as his father. He was elected a deputy of the estates-general (a form of parliament, but without real power) that met in May 1789, and subsequently served in the National Constituent Assembly. He was a politician, and one of the best-known and most influential figures of the French Revolution. Robespierre became increasingly popular for his attacks on the monarchy and his advocacy of democratic reforms. In April 1790, was elected president of the powerful Jacobin political club. After the downfall of the monarchy in August 1792, Robespierre was elected first deputy for Paris to the National Convention. The convention abolished the monarchy, declared France a republic and put the king on trial for treason, all measures strongly supported by Robespierre. The king was executed in January 1793. Haitians usually relate the Bois Caïman ceremony as a historical event that started their war of independence, but modern scholarship suggests that details about the episode might owe more to myth than to reality. There probably was not one, but two slave gatherings, one held at the Normand de Mézy plantation in Morne Rouge on August 14, which the French uncovered by torturing slave participants, and another one in Bois Caïman held a week later, about which very little is known. According to Léon-François Hoffmann’s Haitian the second meeting were invented by Antoine Dalmas in his Histoire de la révolution de Saint-Domingue (1793) in order to portray the slave gathering as a bloody, satanic assembly.

On the other side, The Women’s March on Versailles was one of the earliest and most significant events of the French Revolution. The march began among women in the marketplaces of Paris who, on the morning of 5 October 1789, were near rioting over the high price and scarcity of bread. Their demonstrations quickly became intertwined with the activities of revolutionaries who were seeking liberal political reforms and a constitutional monarchy for France. The market women and their various allies grew into a mob of thousands and, encouraged by revolutionary agitators, they ransacked the city armory for weapons and marched to the Palace of Versailles. The crowd besieged the palace and in a dramatic and violent confrontation they successfully pressed their demands upon King Louis XVI. The next day, the crowd compelled the king, his family, and most of the French Assembly to return with them to Paris. These events effectively ended the independent authority of the king. The march symbolized a new balance of power that displaced the ancient privileged orders of the French nobility and favored the nation’s common people, collectively termed the Third Estate. Bringing together people representing disparate sources of the Revolution in their largest numbers yet, the march on Versailles proved to be a defining moment of that Revolution. To conclude, the series of events that transformed the French colony of Saint-Domingue into the independent nation of Haiti lasted from 1791 to 1804, and the French revolution lasted around ten years, from 1789 until 1799. They both were around the same time, both successful, but had some differences between them such as racial, leadership, also economically different.

Comparing The Haitian To The French Revolution. (2016, Feb 29). Retrieved from https://studymoose.com/comparing-the-haitian-to-the-french-revolution-essay 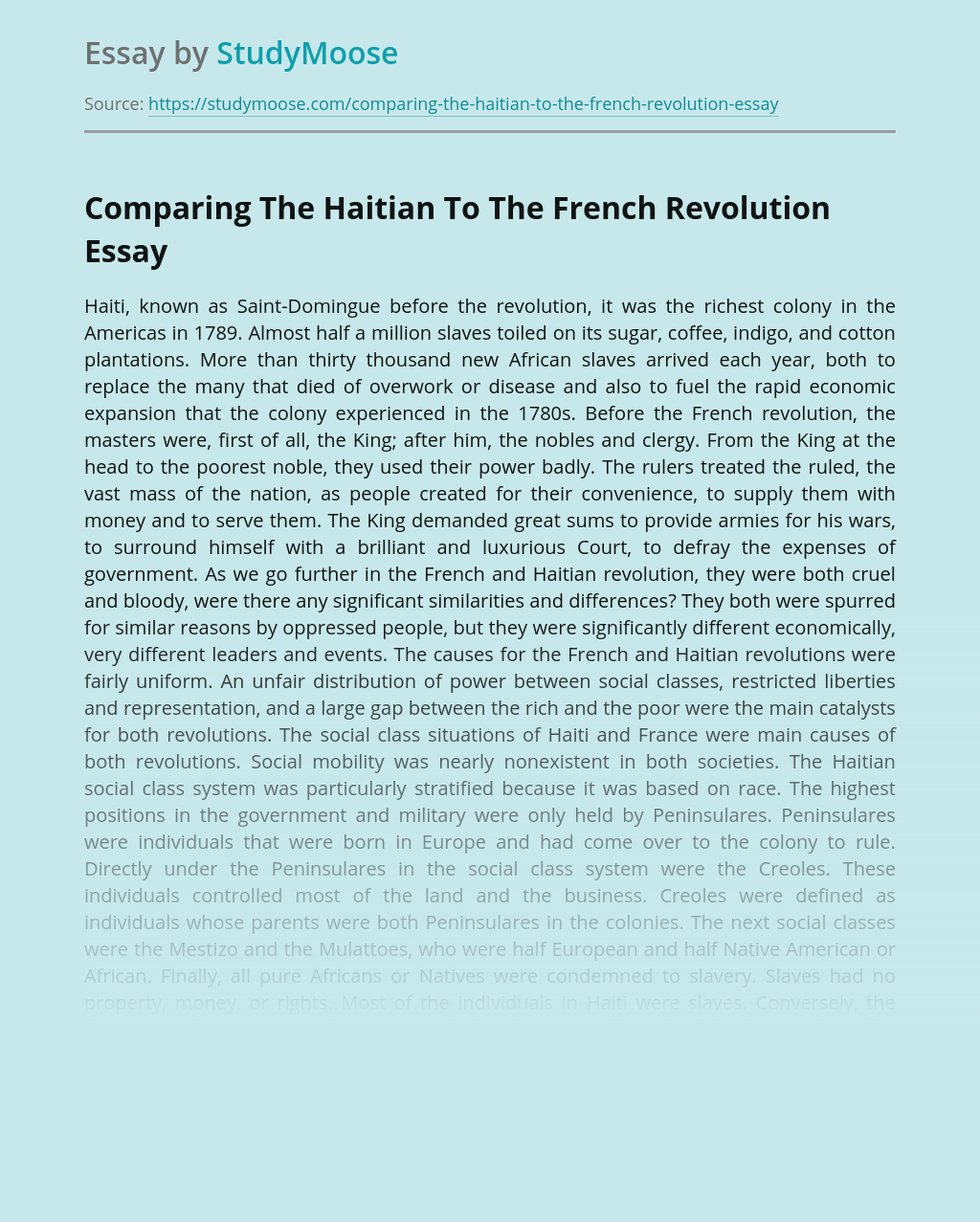