The Three Types of Revolutions

There are three kinds of massive revolutions. They are Agricultural, Industrial, and Information Revolution. A revolution is a change that occurs rapidly and massively, leading to a fundamental transformation of society. They could be political, economic, or social revolution, but in any case they involve a change that transforms society to its core. Revolutions start usually with development processes. Development is a planned effort to bring positive change. The Agricultural, Industrial, and Information Revolutions are the three kinds of great revolutions.

Don't use plagiarized sources. Get your custom essay on
“ The Three Types of Revolutions ”
Get custom paper
NEW! smart matching with writer

One of the three types of revolutions is Agricultural Revolution. This revolution started more than 10,000 years ago when nomads started to get tired of moving from place to place, so they started to cultivate and domesticate plants and animals. Moreover, new technologies such as the simple hoe to the more complex irrigation systems. The ancient Egyptians, for example, knew how to divert water from the Nile to irrigate their fields. As these new technologies started to emerge food production increased causing surpluses.

These surpluses or extra food productions started cities and small villages. This changed their living arrangements. For example people started to make beds, tables, and chairs which would have been unnecessary for moving nomads. The increasing interpersonal contact created a need for increased group action and led to the growth of leaders and government. The main value of this revolution was to settle down and start stable life style. This is how the Agricultural Revolution changed a simple society to a more complex one.

Next, there is the Industrial Revolution, which was the fundamental change in the way that goods were made.

Before this revolution, people used to use their hands. Everything changed by the mid-1700s. This fundamental change in manufacturing represented a response to at least two major forces: First, an age of innovation had dawned thanks to the thinking and discoveries of the Renaissance. This led to the introduction to new technologies. Some examples would be Watts steam engine, which helped develop many machines including the train, which was used for transportation. There was also spinning and weaving machines.

Basically machines replaced muscle power. The new railroad system caused massive trade and communication between people. Government back then pressured people to work in industry. Manufacturing was no longer in individual shops or stores, now they were in factories and enterprises. Living arrangements changed dramatically. In the 1800s the majority lived in the countryside by the year 2000 the majority lived in the industrial cities. The are two important values they are; first, changing the way goods were made. Second, fulfilling the high demands on products. This is how the Industrial Revolution changed society.

Lastly, there is the Information Revolution, which is reshaping societies and economies not to mention personal lives. This revolution began with the invention of the computer chip. This caused the emerging of new technologies such as cellphones and laptops. This technology also helped transportation. For example, navigation systems are used in cars. It also created many service jobs like computer engineering. It is also easier to use this technology for communications between people. This also helps education. It also provides transportation. For example, robotic machines make cars. This also changes living arrangements such as how families spent time together, the kind of work we do, and other aspects in our lives. The basic values for the Information Revolution is globalization, spreading ideas, and reshaping societies and economies. These are the changes that Information Revolution caused.

In conclusion there are three basic revolutions. They are Agricultural, Industrial, and Information Revolution. This is how each revolution fundamentally changed societies.

The Three Types of Revolutions. (2016, Jul 21). Retrieved from https://studymoose.com/the-three-types-of-revolutions-essay 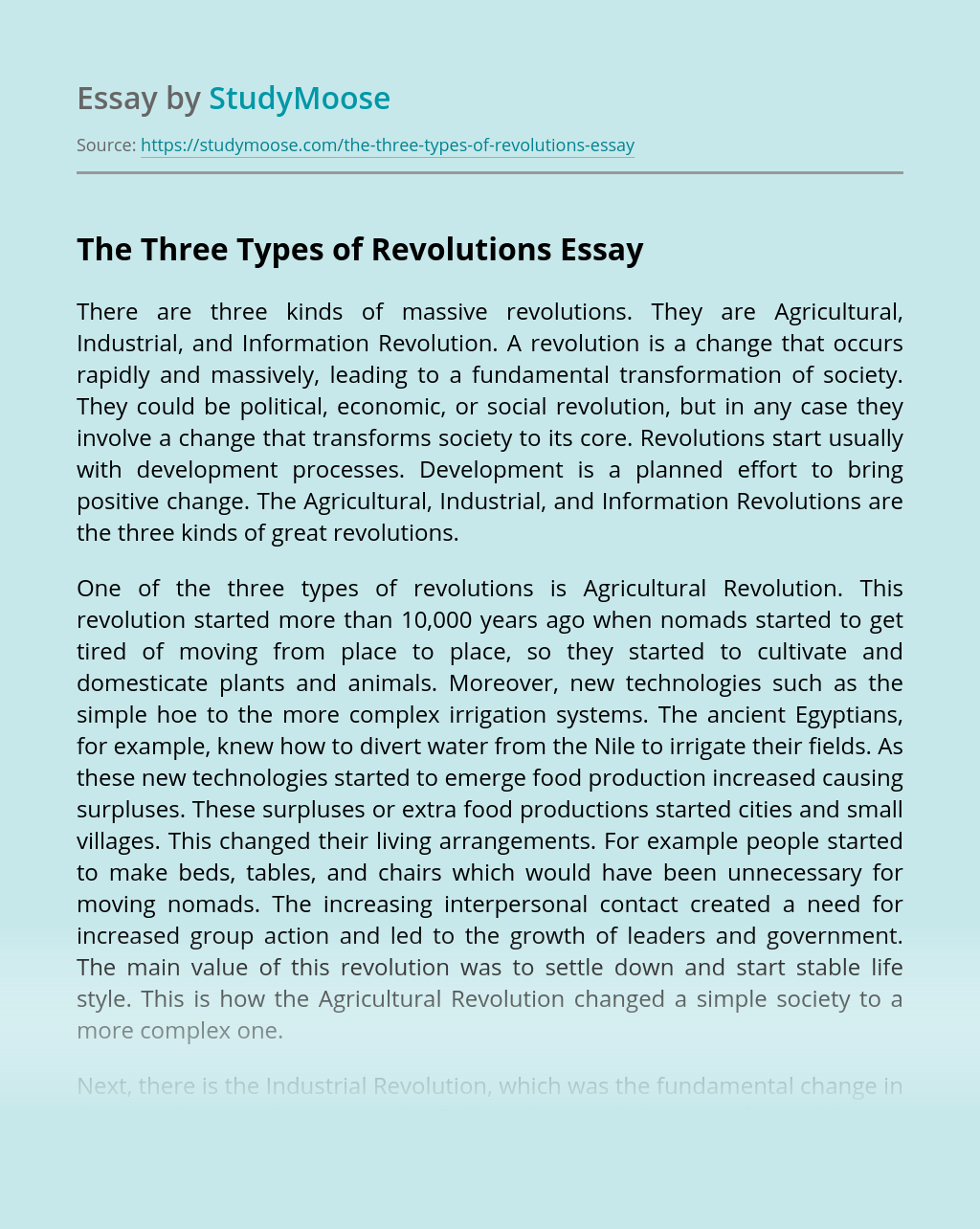