Was life better when technology was simpler?

During the past three hundred years of human civilization,the developments in science and technology have showered benefits on man;he has conquered space,and has made staggering leaps in communications,transport and medicine.So,I personally feels that modern technology make one’s life more convenient.es First of all,nobody could deniy the fact that science has made man’s life comfortable on this planet.Our industries,agriculture,and also economy depends on the discoveries of science.Without the discovery of thermal energy and other similar discoveries in the spheres of electricity and nuclear physics,we would have had a world which is totally different from today’s.

Turn in your highest-quality paper
Get a qualified writer to help you with
“ Was life better when technology was simpler? ”
Get high-quality paper
NEW! AI matching with writers

Scientists’ discoveries in the field of transport and communication have made the world small and the different parts of the world are easily accessible to us.Televisions,radios, computers,teleprinters,and etc have been undoubtedly blessings.

So,all those things indicates that modern technology is being a helping hand. Besides that,technology play a very important role in society because it can save a great deal of time and money.

For example, if one is a wealthy man who always had trouble employing talented maids,he can buy a cleaning robot and use it for the rest of his life. Therefore, he won’t have to use all his time employing talented maids. Also,he could also save a lot of money from not having to pay servants.On the other hand,middle class families do not have to do all the hard labor anymore.

For example, microwave ovens cook food easily without using any stoves and making a big mess. Some decades ago, there were no gas or electric stoves, people have to get firewoods and lighting them up for cooking.Hence, Technology makes things very easy to use comparing it in the old fashion way. Medical science is also very progressive and saves many innocent lives.

Medical treatment has been going well with the help of technology. Nowadays, hospitals use technology as the assistance for the operation. Doctors use machines to produce medicine to cure sickness and the discovery of x-ray enable doctors to treat some kinds of diseases.Some critical diseases also sometimes could be saved with the magic of modern technology.Thus,technology also plays a very important role in medical side. Last but not least,eventhough there are a few harms caused by modern technology,I personally feels that without the technology that we are having nowadays,man’s life on the land will be very complicating and harder. Don’t you think it will be awesome to press just a few complicated buttons rather than do the labor yourself?Therefore,technology is a great blessing to the mankind to not only live their life conviniently but also with pleasure.

Was life better when technology was simpler?. (2016, Apr 29). Retrieved from http://studymoose.com/was-life-better-when-technology-was-simpler-essay 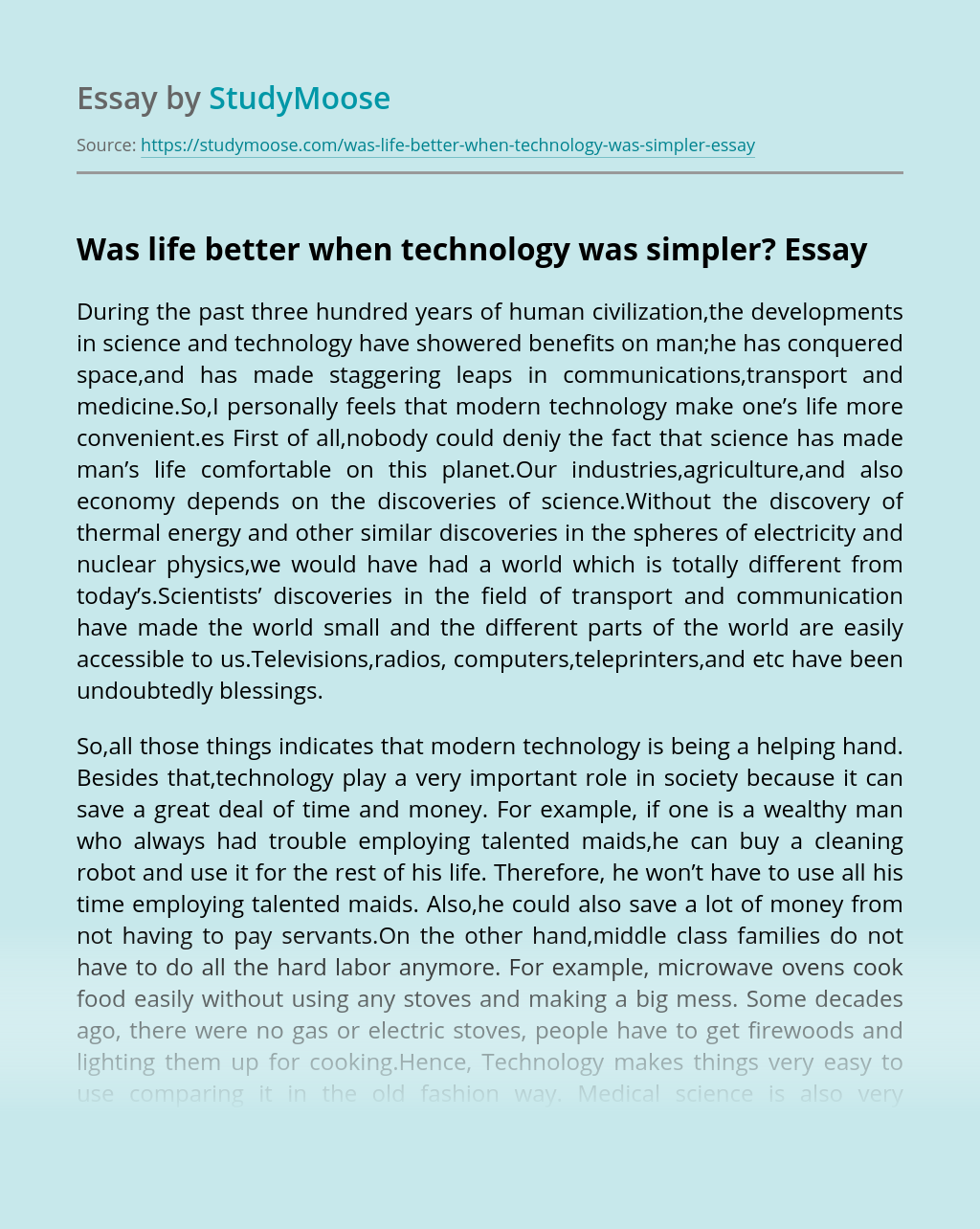 Turn in your highest-quality paper
Get a qualified writer to help you with
“ Was life better when technology was simpler? ”
Get high-quality paper
Helping students since 2015
Stay Safe, Stay Original