Thus, I opine that modern technology does sometimes improve quality of life.

Don't use plagiarized sources.
Get Your Custom Essay on Does Technology Always Improve Quality of Life Just from $13,9/Page

Firstly, modern technology has improve quality of life through the improvement of healthcare services. Researches and development in the healthcare sector of society are conducted to find ways to make further improve quality of life. With the help of modern technology, for example, many different types of drugs and vaccines have been created and developed for disease prevention.

The American medical announced that it is possible to vaccinate against brain cancer and perhaps more cancers can be vaccinated in a similar way.

The chances of people contracting various illnesses are slim and thus, they live a healthier life. Some surgical procedures that were deemed extreme and dangerous in the past were made easier with modern surgical technology and the chances of succeeding was almost for sure, and one example is heart transplant. Hence, modern technology has lower the chances of us falling sick and increased the chances of recovering.

Considering how modern technology has raise and increase life expectancy, allowing people to live healthier lives than before, it has proven to improve quality of life adversely for many people. Secondly, modern technology has improved transport and communication. In many countries, international trade is very important, as no one country can be self-sufficient in providing goods and services. This is especially so for a country like Singapore whereby we do not have a lot of natural resources and thus, our dependence on trade is large.

Trade is heavily linked with transport and communication technology as they are vital for trade operations. For example, as a trading hub, Singapore has utilised modern technology to built cargo transportation cranes and in addition, communications between cargo ships and PSA improved and also position locating have became more accurate with the availability of modern technology. Hence more goods and services can be obtained and the people have more choices to consumed from, and they will be able to choice whatever is best for themselves, improving the quality of life.

Thirdly, modern technology has increase productivity and made life easier for people as modern tools of production and industrialisation created by modern technology have enabled many countries to enjoy economical growth and create more wealth for the people and consequently creating better live for the citizens. For example, robots are used by many firms in Japan’s packing industries instead of human labour, and this robots such as the RF87 tokyo, are able to produce more output in a shorter period of time compared to human labour.

This bring about increase productivity and consequently allowing success for the firms, and economic growth for the nation. Modern technology has also increase our access to information. Now, information technology is so advanced that we are able to find almost any kinds of information on the Internet just by typing certain key words in the search engines. With the increased efficiency and access to knowledge, society is able to identify opportunities for economic growth and with economic growth, quality of people’s lives can be improved.

Furthermore, improving communication improves quality of life as information can be disseminated to everyone easily. Natural disasters in a certain country can be made known to the world almost immediately, thus allowing help to be provided quickly. For example, the earthquake that struck Haiti few years back was immediately reported to the rest of the world and countries like singapore were able to provide aid swiftly, so as to improve the quality of life of the victims. The needs of the people are catered to with the availability of modern technology, and has improve quality of life.

Lastly, modern technology relieves global hunger. In the world, there are many people living in countries where they are faced with problems of lack of food, which may lead to starvation. This is especially so in developing countries where they are economically not stable and are not able to provide sufficiently for the people. Hence, with modern technology, for example, genetically modified food was developed whereby seeds of crops are injected with certain substances so as to develop traits that are favourable for a specific climate so as for the crop to grow well.

Bacillus Thuringiensis(BT) bacteria is injected into corns to increase its resistivity to pests, and allowing them to grow in warmer environment. This allows more crops to be harvested. This is especially useful in third world countries such as Ethiopia whereby they live in regions that experience unpredictable climate, increasing food supply for the people, allowing them to stay nourished. Being more nourished, people will be less prone to falling sick as their daily nutritional requirements are met.

Thus, they would live more healthy lives, improving their quality of life. Some people may argue that some of the certain substance used in the foods may cause allergic reactions to occur as some people maybe allergic to the substances. This may in turn lead to health problems, lowering quality of life. However, the efforts of developing GM food has largely improved the problem of hunger around the world, and as for the problem of allergies, this only affects very little amount of people, which can be solved for further advancement with technology. 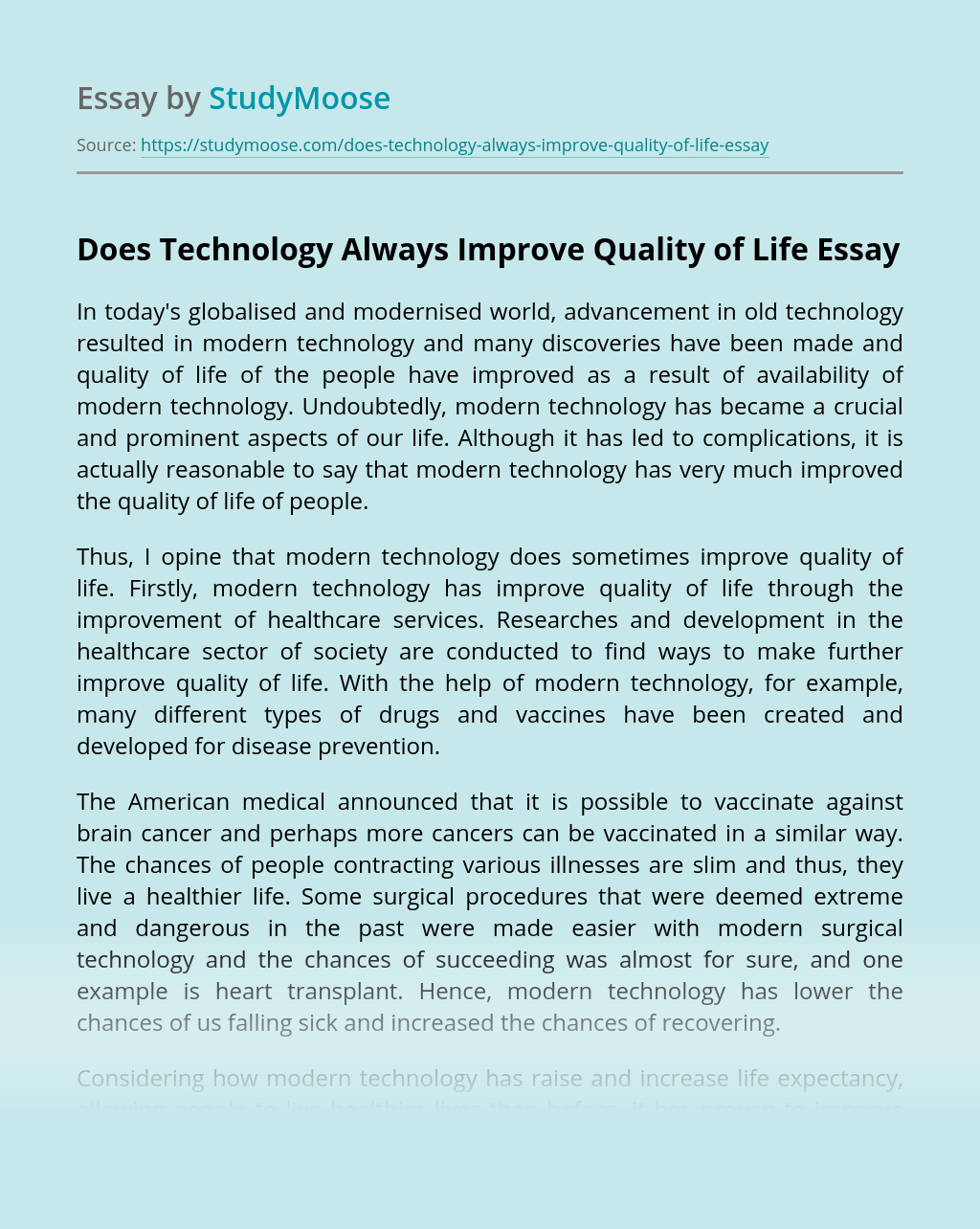