The years 1789 and 1917 held similarity in the fact that they were the beginning of years of utter chaos in Europe. In 1789, France was at the beginning of what was to be known as the French Revolution. And coincidentally so was Russia in 1917. These revolutions changed Europe in many ways, especially politically; the aftershocks were felt for decades after. Resemblances were held in the initiation execution, and follow-up; some differences did exist as well in the process. The wars of 1789 and 1917 held mainly social and political similarities as well as a few differences.

Don't use plagiarized sources.
Get Your Custom Essay on French and Russian Revolution Just from $13,9/Page

The French revolution in 1789 evolved out of a state of fiscal crisis. France had lost copious amounts of money supporting the American Revolution. There was famine across the country; the peasants were unhappy. France had no money, and Louis XVI consulted an advisor on the issue. In the end, the Estates-General, a form of parliament, was born. The third estate, ordinary people, became frustrated and vowed at the Tennis Court Oath on June 20th, 1789; it can be considered a bottom-up revolution, beginning from the lower class.

The Russian revolution emerged out of a similar scenario. There was widespread famine and poverty across Russia. Bloody Sunday in 1905, a demonstration marched towards the Winter Palace, was orchestrated by peasants, similarly another bottom-up case. In its wake, Tsar Nicholas II implemented the Duma, a form of parliament, in an attempt to solve the crisis. Demonstrations continued until full revolution broke out in 1917.

Also, Tsar Nicholas II, in an attempt to unite his country, placed Russia at war during WWI in 1914. This broke the state up even further; civilians found it humiliating because of the battles lost, famine continued to spread, and many people were dying. Similarities prior to the revolutions of France and Russia include financial crisis, implementation of a body of parliament in an attempt to solve the pending revolutionary crisis (both bodies are biased and end in dissolution), famine and/or bread riots, poverty, dissatisfaction among peasants, strain on resources because of involvement in other wars, initiation from the lower class (with unrest directed at nobility), and a monarchy controlled state. Another uncanny resemblance between the two beginnings of revolution would be the influence
of literature. France had Voltaire and his contributions about the separation of church and state. Russia gained influence from Karl Marx and his ideas on Socialism in the Communist Manifesto.

Similarities of the revolutions while they played out exist heavily as well. Foreign intervention occurred in both scenarios. In the Declaration of Pillnitz in 1791, Prussia and the Holy Roman Empire declared their support for Louis XVI by demanding his return to the throne. This resulted in France declaring war upon Prussia. In the Russian Revolution, Great Britain, America and France (Allied powers) intervened by joining the white side in opposition to communism. In both scenarios there is class tension. The revolutions were a split between parliament and street. In France, the Third Estate was against the monarchy after being shafted in the Estates-General. In Russia, the Soviets were not in favor of the Duma. The revolutions were not just a movement within parliament but within the public as well. The storming of Bastille on July 14, 1789 was an attack by the public on the state prison. The monarchy’s vulnerability is exposed for the first time. The storming of the Winter Palace in 1917 also demonstrates the public’s intervention on the monarchy.

The period after the revolutions held similarities and differences. In the end, both monarchies were sentenced to death in France and Russia. King Louis XVI and his family are put to death; Tsar Nicholas II and his family are put to death. Both revolutions degenerated into civil war, a period of chaos. In France, the Reign of Terror resulted in thousands of civilians being killed. In Russia, after the war in the 1920’s, more civilians died because of poverty and famine than the First World War and the revolution combined. Both revolutions end in totalitarian governmental control. Napoleon emerged as the dictator in France. And Lenin came to power in Russia, which eventually the power went to Stalin. However, the differences that lie between these two revolutions are the goals. France was in search for a capitalistic democratic state and to abolish the current totalitarian one. On the other hand, Russia wanted a socialistic regime. They wanted communism. Ironically, the immediate aftermath left both France and Russia with totalitarian governments, like their previous states.

Eventually however, the Soviet Union emerged as the first socialist state, while France eventually became a democracy. It is also important to note that in the aftermath of both these revolutions, each country entered center stage world politics. France became an important factor in WWI, and Russia became a major power on the globe, especially during the Cold War.

While Russia and France pursued a revolution in pursuit of two very different goals- communism and democracy respectively, they both managed to create a totalitarian government again in the end. The revolutions hold mainly similarities amongst how they were initiated and executed. They even hold some similarities as well in the aftermath. Despite their minimal differences, they held a lot of the same ideas and problems. Both revolutions were events that changed Europe and the world in ways not only political, but social and economic as well. 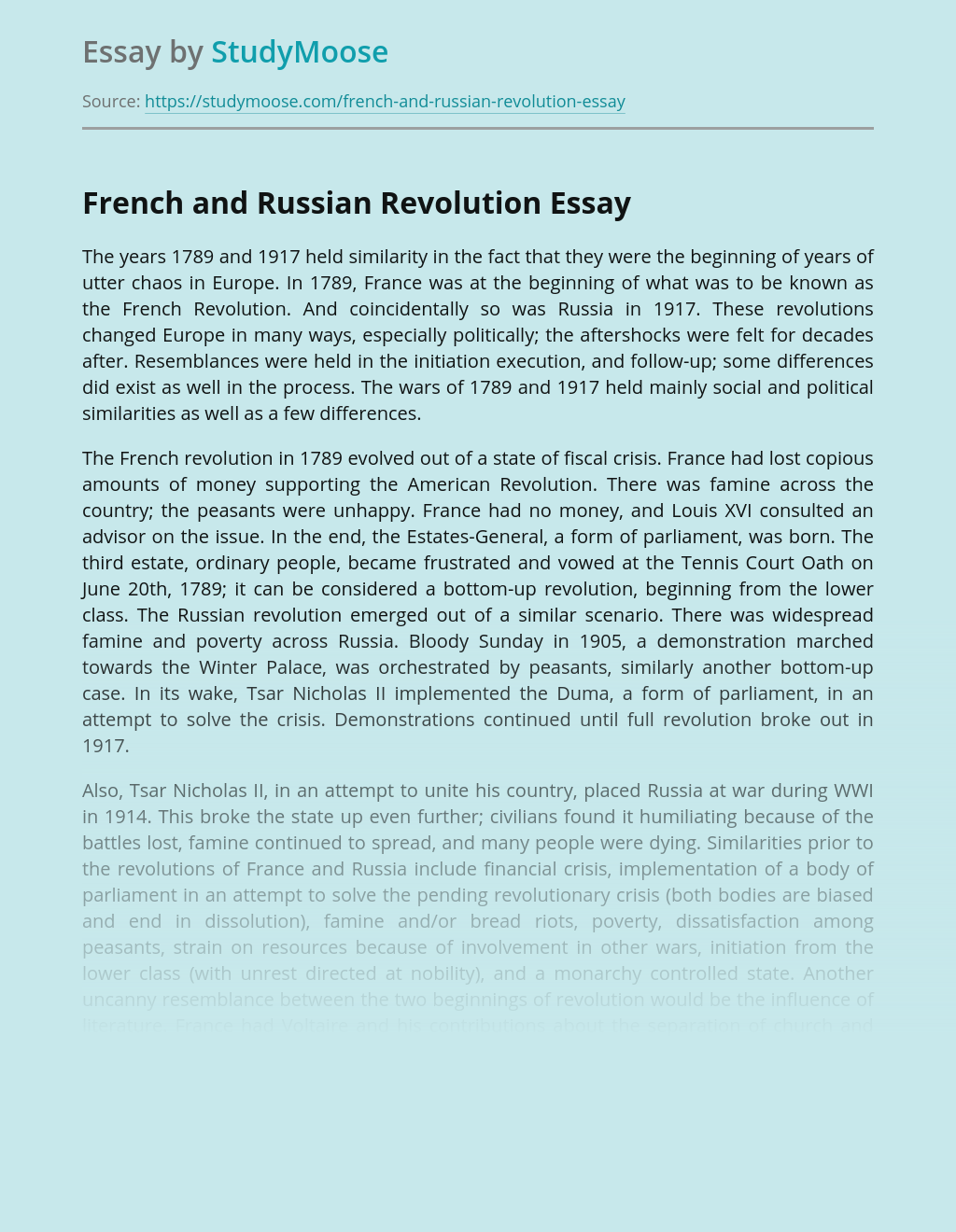 Charlotte Perkins Gilman was a feminist writer who wrote “The Yellow Wallpaper” in the 1890’s. During this time period the woman were expected to keep the house clean, care for their children, and listen to their husbands. The men were expected to work a job and be the head of a household. The story narrates...

The study of the literature provides a peek into the timeframe during the period 1500BC to 500 BC. This period in the Ancient Indian history has been regarded as Vedic period which is the time when Vedic Sanskrit texts were composed in India. The society and civilization which evolved during that time has been known...

Get Essay
Pablo Neruda's Use of Nature

The natural world is one that exists outside of all human constructs and limitations, and illuminates a valuable reality in the world. When considering Pablo Neruda’s body of work, a clear thematic focus on nature is visible. Many of his poems reference the natural, untouched world. This is a thematic juxtaposition to the over-structured, artificial...

SLIDE ONE The Next framework we chose to look at is the “Cun nev in” Frame work!! The Cynefin framework was originally developed in 1999 in the context of knowledge management and organisational strategy by Dave Snowden. Cynefin mean the place of multiple belongings. This frame work allows people to see decision making from a...

Potential Of Coconut Water as Source of Electricity

One of the major problems in our country is energy shortage. There are many methods and proposals on how to conserve it such as the use of batteries. One of these is an electrolytic cell. It contains an electrolyte through which an externally generated electric current is passed by a system of electrodes (electrically positive...