What is Kingship? During the Shakespearean time, being a king means that you are god-appointed to rule on Earth. It was a kings’s responsibility to rule wisely and well and his subjects’ duty to serve him loyally. We see how King Edward is described as ‘good’,’pious’,holy’ and ‘full of grace’ who has the ability to miraculously cure his subjects. While Macbeth’s tyrannical rule is contrasted to the rightful reign of good and lawful kings, bringing death and disease to his country.

Don't use plagiarized sources. Get your custom essay on
“ Macbeth theme of kingship ”
Get custom paper
NEW! smart matching with writer

”i think our country sinks beneath the yoke; it weeps, it bleeds, and each day a gash is added to her wounds.” In the play Macbeth, when Duncan made his first appearance he immediately apprehends the traitors and rewards the good.

“No more that Thane of Cawdor shall deceive Our bossom interest. Go pronounce his present death and with his formal title greet macbeth. He also portrays another trait of being a king, one who is humble,”there’s no art to find a mind’s construction in the face.

After Duncan’s murder, Macbeth takes over the reign of Scotland as king. This unlawful order causes turmoil within Scotland, turning healthy Scotland to a sick and wounded Scotland under an intolerable burden.”Alas poor country, almost afraid to know itself, it cannot be called our mother, but our grave.” This shows how terrible Macbeth’s reign as a king as compared to Duncan. Macbeth does many unscrupulous deeds to keep his throne. He plots the murder of Banquo and Fleance due to Banquo suspecting Macbeth of murdering Duncan as he knew the witches prophecies. Macbeth also massacre Macduff’s family as he wants to give himself self-affirmation that he would be safe for the time being as Macbeth had been told by the witches to “beware Macduff” Finally, when Malcolm and Macduff unites to rebel against this Tyrannical Macbeth, Malcolm, the rightful heir of the throne, claims back the throne. Malcolm is seen to be the Medicine of sick scotland and macduff seen to be Scoland’s avenger.

Macduff, carrying Macbeth’s head on a pole, hails Malcolm as king of Scotland and says, “Behold, where stands / The usurper’s cursed head: the time is free” . The “time is free” because they are all now free of Macbeth’s reign of terror over Scotland. Macduff then leads the men in a shout of victory and loyalty. He says, “I see thee compass’d with thy kingdom’s pearl, / That speak my salutation in their minds; / Whose voices I desire aloud with mine: / Hail, King of Scotland!” . “Compassed” means “encircled” and Malcolm’s “kingdom’s pearl” is Malcolm’s circle of loyal thanes, who encircle him like a string of pearls encircles a crown. Macduff knows that these thanes already think of Malcolm as their king, and now he asks them to join him in shouting out loud, “Hail, King of Scotland!” And so they do, honoring Malcolm, above whose head looms the severed head of Macbeth. 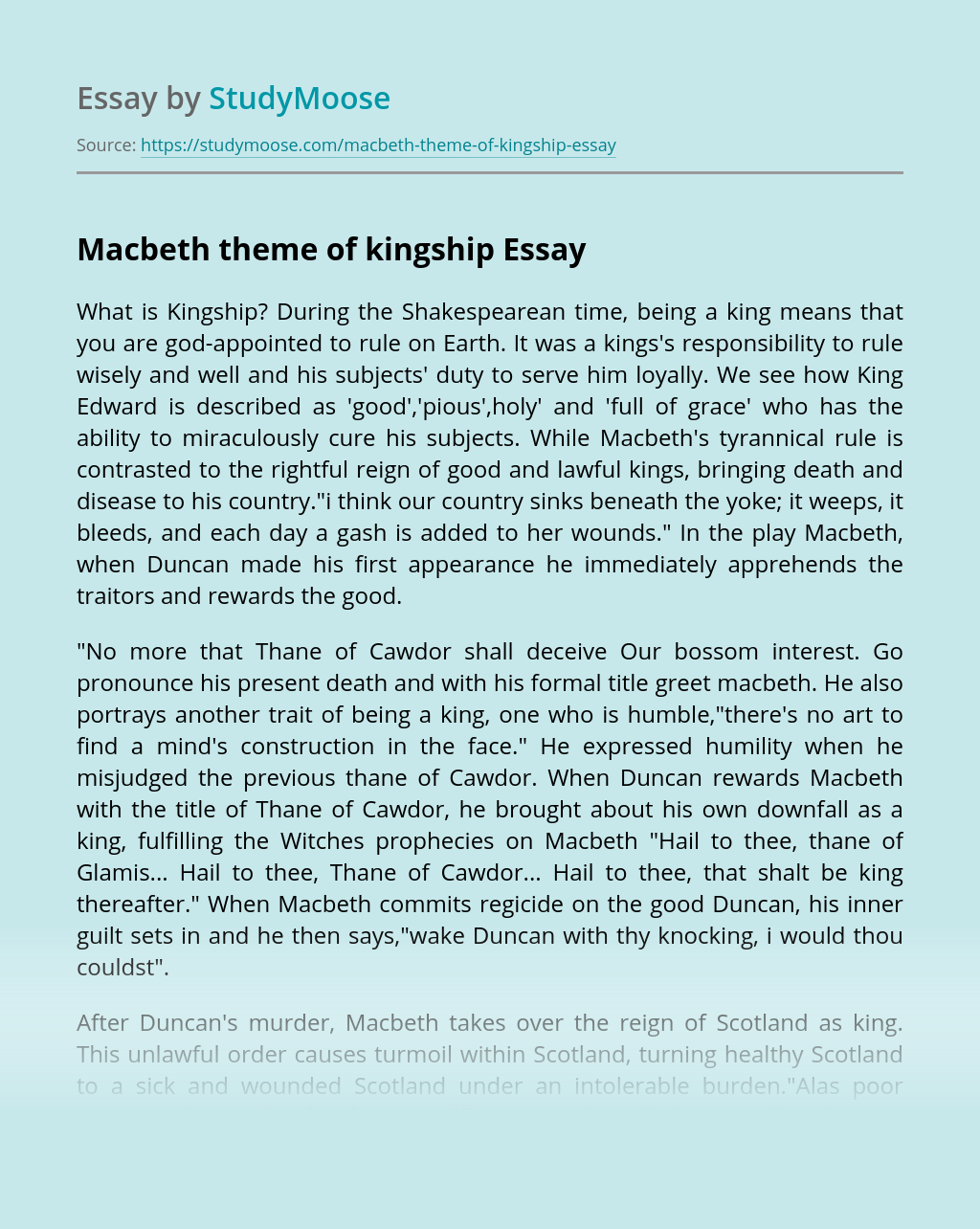