The theme of ambition is well elaborated in Shakespeare’s play “Macbeth”. Ambition is the reason behind the greatest achievements of men in the world. The greatest discoveries and opportunities have been created by ambitious men who allowed nothing to deter their pursuit. However, despite the fact that ambition is the key to a rewarding life, it is worth noting that unrestrained ambition is the greatest downfall of mankind. At the beginning of the play, we see Macbeth as a courageous and loyal soldier fighting for his king.

Don't use plagiarized sources. Get your custom essay on
“ Ambition in Macbeth: Theme & Examples ”
Get custom paper
NEW! smart matching with writer

“Two truths are told. As happy prologues to the swelling act. Of the imperial theme”(1.3). Later he meets the three witches who plant an evil desire for greatness in Macbeth. This coupled with the feeling of his ambition by Lady Macbeth manipulative desire for the crown makes him change his good nature to evil as he becomes greedy for power. He was led to doom by the deceit of fate by the witches adding to his unrestrained ambition

Macbeth starts well by excelling in the Norwegian war whereby the king had ordered the killing of traitorous Thane of Cawdor.

His ambitious loyalty is rewarded as the king gives him the title of Thane of Cawdor. In response to the king’s recognition, McBeth meekly accepts that he owes service and loyalty to the king and his country. This clearly shows that he is proud of his good ambition to be courageous and loyal leading to immense success. McBeth only concerned about serving the king and his country without personal interests.

His companion Banquo is equally ambitious to perform to the best of his ability.

This good ambition changes immediately after the encounter with the three witches who corrupt their ambition with deceitful prophecies. Macbeth learns that he will be crowned the Thane of Cawdor and become the king immediately after the encounter. They also told his friend Banquo that his sons will be kings They are convinced that the witches’ power is genuine as Macbeth is crowned the title of Thane of Cawdor as prophesied by the witches. Macbeth is now convinced that he will succeed by chance. This clearly shows that he has lost the ambition to work for his success. He is to become the king by chance and the spell of the witches without doing anything significant. The king visits Macbeth in his house and he uses this opportunity to write a letter to his wife revealing the witches’ prophecy about him becoming the king. Lady Macbeth is now aware of her husband’s ambition to be the king but fears he is too timid to do all that is necessary to ensure he ascends to the throne. As Lady Macbeth reads the letter, she confesses to fear her husband’s willingness to forsake his morals for the evil required to become the king. This shows that Macbeth is too humane to carry out any evil act of greed for power. It requires external forces to change MacBeth’s good ambitions to evil. This however not an excuse as it is within his power to turn down the manipulation and trickery. “Thou wouldst be great Art not without ambition, but without
The illness should attend it” (1.5)

Lady Macbeth takes it on her own to manipulate her husband to kill the king so as to ascend to power. She has an evil ambition to become the queen and even evokes evil spirits to help her manipulate her husband. She allows evil spirits to take away her femininity in exchange for bitterness to carry out the fouls necessary in ensuring her husband becomes the king. Macbeth finds it hard to decide on murdering the king but when accused by his wife of being a coward and unloving husband, he decides to execute the murder. He confesses to being overpowered by his ambition to act against his intent.

Macbeth goes ahead to kill King Duncan and is crowned immediately just as planned by his wife. Manipulation and selfish ambition changed him from the loyal good ambitious soldier to a traitor. His downfall begins to manifest after Banquo suspects that Macbeth had a hand in the murder of the king. Banquo fears that Macbeth plotted the killing of the king for the witches’ prophecy to pass since they visited the witches together. Macbeth quotes Banquo’s suspicion and is also threatened by Banquo’s ambition and prediction of his sons becoming kings too. This escalated Macbeth’s evil ambition and plots the killing of Banquo and his sons. The killing of the king had taken away MacBeth’s conscience and he is now too ambitious to be the king such that he cannot go back on his evil plans. His good ambition to be loyal and of service to his king and country at the beginning of the play has totally changed to malicious, selfish, and evil ambition.

It can be argued that Macbeth could not have killed the king without Lady Macbeth’s manipulation and the vague prophecies from the witches. From the beginning of the play, it is evident that Macbeth loved and adored. However, it is clear that it is his unrestrained ambition which caused him to yield to the manipulation and trickery from his wife and the witches to change his good character to evil. He had to go against his morals for selfish gains and betray his trust in the king and his friend Banquo. It is clearly questionable why MacBeth is now afraid of Banquo and not before. His unrestrainable ambition has killed his value for true friendship. Banquo, who helped him achieve genuine success and recognition is now the obstacle to be abolished in order to become the king. Macbeth is now too ambitious to destroy anything blocking his way to the throne.

McBeth’s discovers how his unrestrained ambition has destroyed him at the end of the play when his wife runs insane and commits suicide. He starts to regret and wishes to have led a normal life to an honorable age but it is now too late. He is determined to carry on his evil since it is now too late to change anything. He ensures that Macduff is not born naturally but untimely ripped off his mother’s womb. Macduff grows up to terminate MacBeth by the sword fulfilling the adage that he who lives by the sword shall die by the sword. His head was too drunk for power to the point of no return and had to be chopped off to restore sanity to the leadership. The theme of ambition in this play is properly presented using the characterization of both Macbeth and Lady Macbeth. Unlike Macbeth, his wife is malicious from the onset. Macbeth was good, courageous, and loyal before the manipulation and trickery. However, they both pay with their life for not taming their ambition thus proofing that unrestrained ambition is the greatest downfall for humankind. 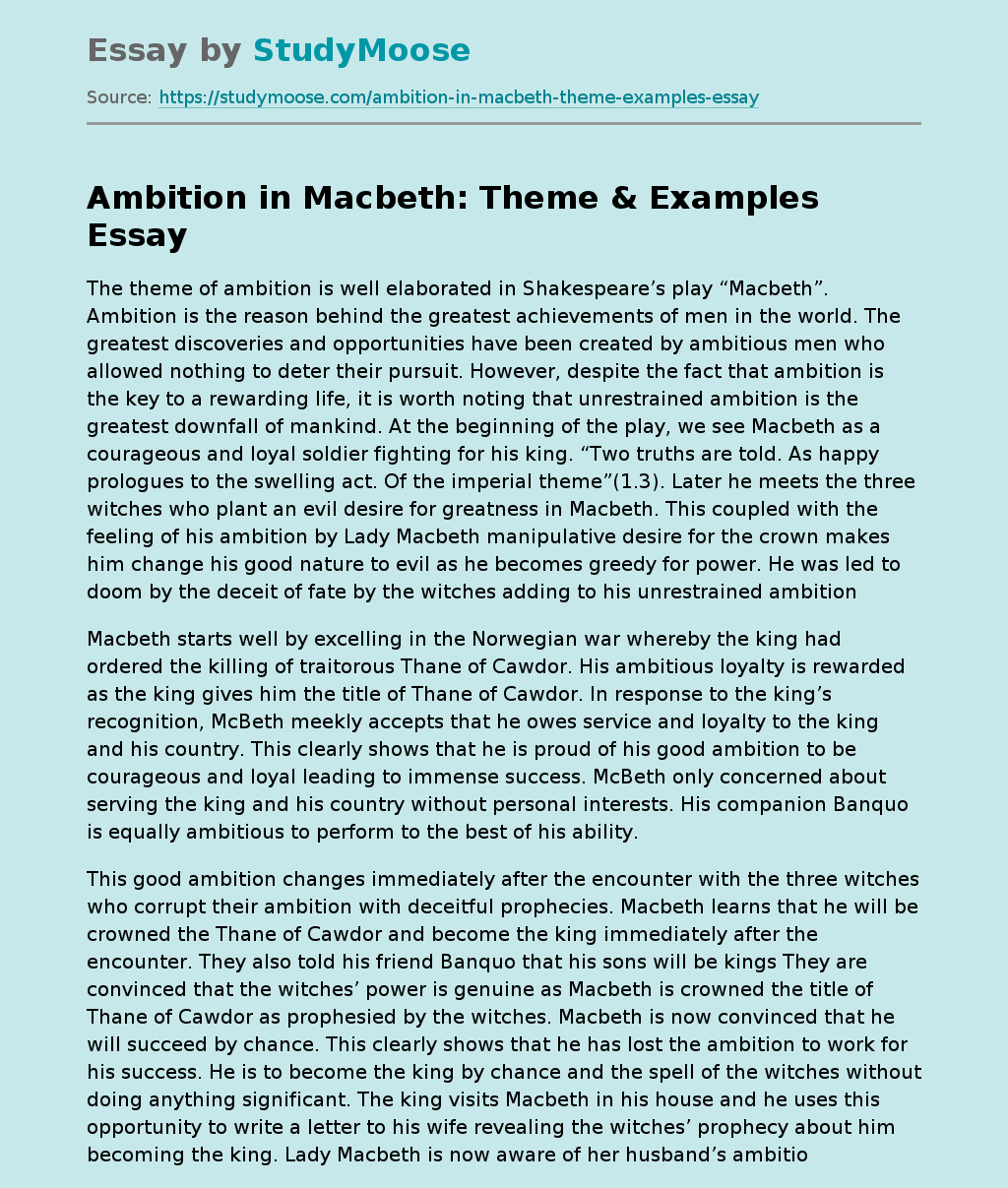