There are many themes in “Macbeth”, not surprising given the play’s richness of character, language and events. These themes include goodness and evil, deceptive appearances and reality and the supernatural. They are all linked to the idea of “fair is foul”, as are the characters. I will now try to examine in more detail the dramatic significance of “fair is foul” in Shakespeare’s “Macbeth”.

It is believed that the play was written with King James in mind. “Mabeth” was written sometime between 1603 and 1606, years during which King James (6th of Scotland and 1st of England) was on the throne.

Don't use plagiarized sources. Get your custom essay on
“ Examine the dramatic significance of the theme “fair is foul” in Macbeth ”
Get custom paper
NEW! smart matching with writer

Many of James’ interests were included in the play, for example kingship, loyalty and most importantly his fascination with supernatural (he even wrote a book called Demonology, on the subject).

The idea of the supernatural and witchcraft in particular are very important during the play. The witches also known as the “Weird Sisters”, Act 1 Scene 3 Line 34, represent evil and temptation in the play.

In Shakespeare’s day there was widespread belief in the existence of witchcraft and demonology. People feared that witches attempted to corrupt God’s natural order, and thus in 1604 its practice became punishable by death. However they were still uncertain on the power of witches. This uncertainty can be seen in the play. We never know whether the witches have any real power or whether they can only persuade and suggest things to others.

The Gunpowder plot seems to have been added to the play. It was an action taken to remove the king, very similar to Macbeth’s actions.

Again it gives the idea of God’s natural order being destroyed. They believed that the king ruled by Divine Right i.e. they were God’s chosen one. Therefore killing him, to obtain unrightful kingship would definitely shatter the natural order.

The fact that they are evil is shown in their final couplet. It is, as mentioned above, the three witches who chorus the line “fair is foul and foul is fair”. It can be translated as “good is bad and bad is good”, a slightly difficult phrase to understand. An important thing to note is that “Fair is foul…” is a paradox. That is a statement, which appears to contradict itself but can contain a truth. It is this line that sets the tone for the rest of the play; the way things appear may not be the way they really are!

Their line however can also be used to describe themselves and their predictions. When they tell Macbeth his future it all sounds good, “…All hail Macbeth, that shalt be King hereafter”. However it is these predictions that lead to his fatal actions and drastic downfall destruction. So really, these future visions aren’t good at all but bad. The witches never tell lies but because they speak in puzzling riddles, its possible that Macbeth hears what he wants to hear, by believing only the positive aspects.

In Shakespeare’s “Macbeth”, the protagonist is lured to murder the King, Duncan, by witch’s predictions, his wife’s encouragement, and by his own ambition. He commits a trio of wicked murders in the course of the play. It is possible to forget that the character described as “…brave Macbeth…” is the one later described as a “tyrant”. Macbeth’s character is also one that is linked to the idea of “fair is foul and foul is fair”.

Prior to his encounter with the witches (Act 1, Scene 3) Macbeth is a hero, a loyal warrior in service of the legitimate, King of Scotland, Duncan. He is described as a noble valiant and fearless warrior and “Bellona’s bridegroom”, husband of the goddess of the war, worthy to be God of War. It appears that he has many positive characteristics but soon enough we find he has a fatal weakness…ambition.

He was easily influenced by, witches prophecies and his wife’s persuasion, to follow the ambitions that he secretly desired to chase, “Thus thou must do’ if thou have it”, in other words he must do it (kill King Duncan) if he wants the crown. He allowed his ambitions to suppress his good qualities and the end of the play describes him as “a tyrant”, “a dwarfish thief”, and “hellhound”.

Macbeth is obviously one of the clearest and simplest examples of the theme “fair is foul”. By this I mean he is a character who fits the idea, things that look good may turn out to be evil. However I don’t think it is fair to call him completely evil. He did after all have a conscience, which played a major part throughout the play. It was his conscience that held him back from drastic actions, but not enough to stop him from murders that in the end he carried out.

Lady Macbeth is also a good example of the theme “fair is foul”. In the world of Shakespeare tragedies she has come to represent feminine treachery. Her ambition, foulness and rejection of female values, mark her as a heartless villain more monster than woman! “Come to my woman breasts and take my milk for gall, you murdering ministers” .

Unlike Macbeth, it is easily noticed that she has an evil hunger for power from the start. “…chastice with the valour of my tongue All that impedes thee from the golden crown…” just a section of her words from the first time we meet her (Act 1 Scene 5).

However Shakespeare uses dramatic irony, in that the audience know she is evil but many characters fail to see this. Many are fooled by her deceptive acts. “Fair and noble hostess”, are the words Duncan used to describe Lady Macbeth, who turned out to be involved in his murder later that night.

The audience get a taste of her hunger for power by her reaction to the letter from Mabeth, it is both powerful and dramatic. As soon as she has finished reading the letter (including details of the witches premonitions) she decides to make sure Macbeth will become King. She knows her husband is ambitious but also considers his lack of ruthlessness- “yet I do fear thy nature It is to full o’ th’ milk of human kindness”. She claims that ruthlessness o is “the illness” that Macbeth doesn’t have in him. She decides that to gain the throne Duncan must be killed.

To her great delight, she hears that the King is coming that very night. She invites the spirits of evil to enter her body- ” Come you spirits That tend on mortal thoughts! unsex me here, And fill me from the crown to the toe top-full Of direst cruelty”. Any thoughts of doubt that she has some good inside her are totally unquestionable, at this point. How can a woman want the very characteristics that make her a woman, i.e. love and care, to be taken away just so that she can complete a wicked murder?

The language she uses from lines 32-47 (Act 1 Scene5), are very similar to those used in a spell or chant. She is calling spirits to take away and feelings she may have, and fill her with murderous thoughts, “Come u spirits…you murdering ministers”. The language used gives the effect of dark magic and incantations, symbolising Lady Macbeth as a witch.

As said above the line “fair is foul” gives the impression of deceptive appearances and reality. Lady Macbeth, displays this idea very well, when she is fooling her guests. When King Duncan, arrives at the castle, he comments on how nice the atmosphere is, “the air Nimbly and sweetly recommends itself”. It was planned by Shakespeare to have an ironic effect, that King Duncan should say that, when taking into consideration Lady Macbeth’s words and plans from the previous scene. She is a great deceiver, falsely exchanging pleasant conversation, very successfully.

It is also Lady Macbeth who advises her husband to put on a false appearance, “look like the innocent flower. But be the serpent under’t”. This was one of Shakespeare’s many metaphors. The flower resembles goodness and purity while the snake is a dark and evil creature. This also links in with the idea of reality vs. appearances.

We are constantly reminded that things aren’t what they seem in the play. Shakespeare warns us not to be fooled by appearances, there are many examples of this during the play. One of the main examples is the floating dagger. Is it real or is it just a deceptive illusion luring Macbeth to do the unthinkable? There are other deceptive illusions during the course of the play, a main one being Banquo’s ghost. Macbeth believes the ghost, which hovers over Banqo’s empty chair, has gone to haunt him and accuse him of it’s murder.

The witches say that the forest will comes to him, “Great Birnam wood to high Dunsinane hill Shall come against him”. How is this possible? In reality no part of nature in form of lands and forests ever moves! Macbeth is also told “none of woman born Shall harm Macbeth”. Macbeth doesn’t know that Macduff wasn’t born normally, and so believes he cannot be harmed. We must doubt how reliable these premonitions really are! While Banquo doubted what the witches said and preceded to question them, Macbeth had near complete faith in them. I think he believed them, because deep inside that’s what he wants, and the premonitions give him hope of achieving an impossible target.

The theme “fair is foul” is a paradox, although it appears to contradict itself it does contains a truth. This can be seen in the first act when the Thane of Cawdor is sentenced to death. Looking at the execution it would appear to be a foul act. However when considering the reason of execution, being disloyal to your King, it can also be seen as fair.

This is very similar to what happens to Macbeth. His head was carried around the crowds, proving he had been killed. Yes, a very foul act but not completely unfair. After all this was a man who had committed many unforgivable crimes, and caused disorder all over a settled country.

I think that for a line so confusing at first it appears to be the roots of the play! It is associated with nearly all the themes of the play, and all the characters especially Macbeth and Lady Macbeth.

Examine the dramatic significance of the theme "fair is foul" in Macbeth. (2017, Oct 20). Retrieved from http://studymoose.com/examine-the-dramatic-significance-of-the-theme-fair-is-foul-in-macbeth-essay 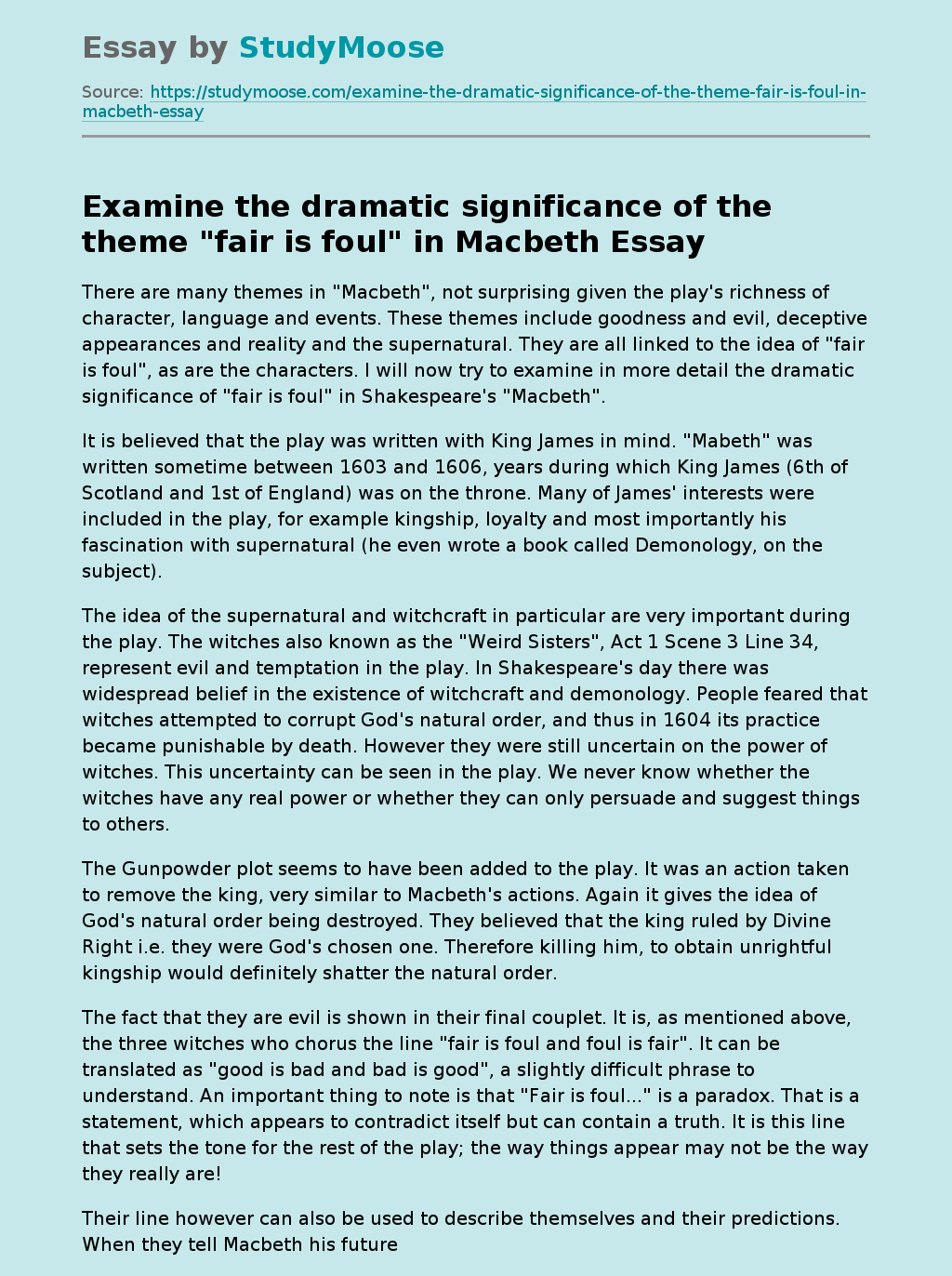