The media play a central role in Britain’s daily life, informing and educating, questioning and challenging – and of course – entertaining. In recent years the availability of more radio frequencies, together with satellite, cable and microwave transmissions, has already made a greater number of local, national and international services possible. The transition from analogue to digital transmission technology is now expanding this capacity enormously. The Internet is providing, increasingly, an additional medium for information, entertainment and communication.

Broadcasting in Britain has traditionally been based on the principle that it is a public service accountable to people.

Turn in your highest-quality paper
Get a qualified writer to help you with
“ Mass Media in Great Britain ”
Get high-quality paper
NEW! AI matching with writers

While retaining the essential public service element, it now also embraces the principles of competition and choice:

• the Radio Authority, which licenses and regulates commercial radio services, including cable and satellite.

The three bodies work to broad requirements and objectives defined and endorsed by Parliament, but are otherwise independent in their daily conduct of business.

Television viewing is by far Britain’s most popular leisure pastime: over 97 per cent of households have at least one TV set. British television productions are sold world – wide.

The BBC provides two complementary national terrestrial television networks: BBC 1 and BBC 2, which transmit 24 hours a day. It also provides a range of digital channels, including BBC News 24 and BBC Choice. BBC Network Radio serves an audience of 29 each week, transmitting 24 hours a day on its five national networks.

BBC has 39 local radio stations serving England and the Channel Islands, and regional and community radio services in Scotland, Wales and Northern Ireland. BBC World Service broadcasts by radio in English and 42 other languages world – wide. It has a global weekly audience of at least 140 million listeners. BBC Worldwide Television is responsible for the BBC’s commercial television activity. It is one of Europe’s largest exporters of television programmes. It also runs an advertiser – funded, 24 – hour international news and information channel; and an entertainment and drama channel broadcast to subscribers in continental Europe and Africa.

The BBC’s domestic services are financed predominantly from the sale of annual television licences; there are no paid advertisements. BBC World Service radio is funded by a government grant, while BBC Worldwide Television is self – financing.

The ITC licenses and regulates three commercial television services – Channel 3 and Channel 4 (in Wales the corresponding service is S4C), which complement each other, and Channel 5 – all financed by advertising and sponsorship. Channel 3 programmes are supplied by 15 regionally based licensees and an additional licensee providing a national breakfast – time service. Licences for Channel 3 and 5 are awarded for a ten – year period by competitive tender to the highest bidder who has passed a quality threshold.

The BBC and independent television both operate a Teletext service, under which information is displayed as “pages” of text and graphics on receivers equipped with the necessary decoders.

Cable services are delivered through underground cables and are paid for subscription. Cable franchises have been granted covering areas comprising 83 per cent of all homes and nearly all urban areas in Britain. In mid – 1999 there were about 12.1 million homes able to receive such services, and 3 million subscribing homes. Digital technology is being introduced which will support up to 500 television channels. Cable also has the capacity for computer – based interactive services, such as home shopping and email.

Many British – based satellite television channels have been set up to supply programmes to cable operators and viewers with satellite dishes. Some offer general entertainment, while others concentrate on specific areas of interest, such as sport, music, children’s programmes and feature films. The largest satellite programmer is BSkyB (British Sky Broadcasting) which, with around 7 million subscribers, dominates paid – for television in Britain. It launched its digital satellite service in 1998, carrying more than 140 channels.

National newspapers have an average total circulation of over 13 million on weekdays and about 14 million on Sundays, although the total readership is considerably greater. There are 10 national morning daily papers and 10 national Sundays – five “qualities”, two “mid – market” and three “populars”. There are about 1,350 regional and local newspapers, and over 7,000 periodical publications.

There is no state control or censorship of the newspaper and periodical press, which caters for a range of political views, interests and level of education. Where they express pronounced views and show obvious political leanings in their editorial comments, these may derive from proprietorial and other non – party influences.

A non – statutory Press Complaints Commission deals with complaints by members of the public about the content and conduct of newspapers and magazines, and advises editors and journalists. In 1995, the Government rejected proposals for statutory regulation of the press and for legislation to give protection to privacy. Instead, it endorsed self – regulation under the Commission and recommended tougher measures to make self – regulation more effective.

Working practices throughout the newspaper industry have become more efficient with the widespread used of advanced computer – based technology. Publishers have been able to reduce production costs by using computer systems for editing and production processes. 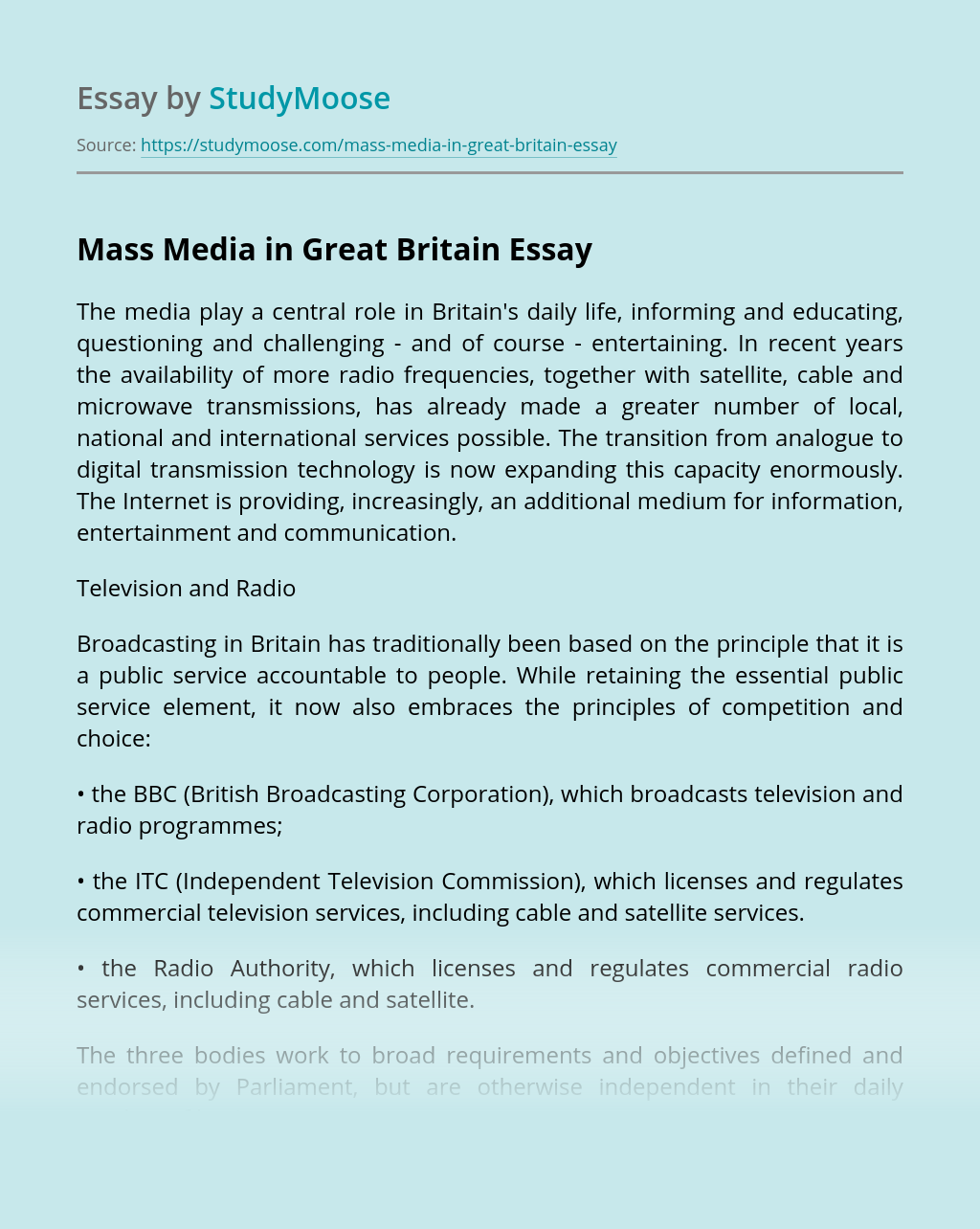 Turn in your highest-quality paper
Get a qualified writer to help you with
“ Mass Media in Great Britain ”
Get high-quality paper
Helping students since 2015
Stay Safe, Stay Original