This is research is based on the consumer decision towards the two wheeler in India. The two-wheeler market has witnessed a marked shift towards motorcycles at the expense of scooters. India is the third largest manufacturer of two-wheelers in the world. The Indian two-wheeler industry has come a long way since its humble beginning in 1948 when Bajaj Auto started importing and selling Vespa Scooters in India. Since then, the customer preferences have changed in favour of motorcycles and gearless scooters that score higher on technology, fuel economy and aesthetic appeal, at the expense of metal-bodied geared scooters and mopeds.

Don't use plagiarized sources. Get your custom essay on
“ Two Wheeler in India ”
Get custom paper
NEW! smart matching with writer

The level of technology change in the Motor vehicle Industry has been high but, the rate of change in technology has been medium. Rising income levels, reducing excise duties, higher loan tenure and loan-to-value offered by the financing companies have all fuelled the growth of two-wheeler demand.

The two-wheeler segment of the industry had been bucking the normal trends exhibited by the automobile industry for the past few years.

Time has come for this segment to align itself with the overall industry growth. The growth in two-wheeler sales has been quite steady over the past eight years and right now, there is no reason to expect an upturn. The dramatic structural shift in the industry from scooters to motorcycles has been going on for the last five years and is expected to have been completed. The Indian consumer being sensitive to prices would certainly take the lead. Besides, the industry size has become too big to sustain the growth rates.

As a result, expects motorcycle growth rates to move towards the overall industry growth rate in the next one to two years.

Two-wheelers owe their descent to the “safety” bicycle, i.e., bicycles with front and rear wheels of the same size, with a pedal crank mechanism to drive the rear wheel. Those bicycles, in turn descended from high-wheel bicycles. The high-wheelers descended from an early type of pushbike, without pedals, propelled by the rider’s feet pushing against the ground. In 1948, Bajaj Auto began trading in imported Vespa scooters and three-wheelers. Finally, in 1960, it set up a shop to manufacture them in technical collaboration with Piaggio of Italy. Under the regulated regime, foreign companies were not allowed to operate in India. The industry had a smooth ride in the 50s, 60s and 70s when the Government prohibited new entries and strictly controlled capacity expansion. The industry saw a sudden growth in the 80s.

To identify and analyze the market growth of two wheeler segment.

The objective of this research is to determine the consumer preferences on base of consumer decision of different motorcycles.

It involves the study of consumers’ attitudes which help them in decision-making.

To analyze the reason for a major shift from traditional two wheelers to modern machines.

The research has been conducted keeping in mind Indian Territory only. From this research, the sources of information, influencing the factors and choice of preference of the customer can be identified.

To know the change in demand pattern of the customer, it would help us understanding the changes in the requirements & preferences.

Chintan Shah, Two Wheeler Industry in India: The Indian two-wheeler industry made a small beginning in the early 50s when Automobile Products of India (API) started manufacturing scooters in the country. Under the regulated regime, foreign companies were not allowed to operate in India.. The recent acceleration in motorcycle sales has led to a serious rethinking in strategies in the two-wheeler market. The two-wheeler industry is expected to undergo a period of transformation, which would involve lower margins and profitability pressures.

Dr. Sardar Gugloth & Margani Soma Sekhara (2012), Decision-making process of purchasing two-wheelers: The growing middle class population, prosperous rural India and the paucity of reliable public transport system is leading to a large number of two wheelers added to the roads every day. Indian roads in most cities, villages and towns are narrow. Two-wheelers allow people to navigate such roads easily. Fuel-efficiency is a huge advantage. With the cost of petrol increasing steadily, two-wheeler makes the daily travel both affordable and convenient. Easy availability of auto finances at attractive schemes has made a two-wheeler a must in most urban and rural homes.

J.D. Singh (1981), A study of brand loyalty in India – 2W: The primary objective of this study was to examine the state of art regarding brand loyalty among consumers in India. Friends and neighbors’ form the most important source which is followed by one’s own experience, family members, news papers and observation.. The findings suggested that differences did exist among individuals in terms of the appropriateness of various preference models.

Nikhil Jha, Management thesis on automobile industry in India: Two- wheeler sales in the country have sky rocketed in the recent years, and the annual sales of motorcycles in India expected to cross the 10 million mark by 2010. The low penetration of two-wheelers in the country 31 two-wheelers per 1000 citizens (2004) leaves immense scope for the growth of the market. Overall the industry sales of two-wheelers have grown by 15% from 6.57 million in 2004/2005 to 7.57 million in 2005/2006. The buoyant Indian economy with a growth rate of around 8% per annum is further expected to fuel the growth of two wheelers in the country.

Anuj Kumar Kanojia (2011), analyzing the state of Indian two Wheeler industry: 2000-2010: The Indian two wheeler industry has shown rapid rate of growth in last one decade. A snapshot of the 2W manufacturers operating in India across time shows that while the core that existed 10 years back continues to remain the same, there have been several casualties along the way but at the same time there have been several new entrants. The 2W industry growth over the last two years has been supported strongly by various underlying factors including India’s rising per capita GDP, increasing rural demand, growing urbanization, swelling replacement demand, increasing proportion of cash sales and the less measurable metric of improved consumer sentiment.

(2008) Study On Consumer Preference Regarding Two Wheeler: Understanding consumer behavior in the present scenario is extremely important as it is no longer a simple task. Now the consumer is considered to be the King. He is the price-maker and not price-taker. . Earlier, there used to be a few two wheeler manufacturers who held a monopoly. However, this situation has changed with the entry of other competitors, especially after liberalization and globalization.

Abhimanyu upadhyay(2013), case study on the sales of two wheelers in rural Indian: The Indian rural market of two-wheeler offers plethora of opportunities to manufactures and service providers. The overall two-wheeler market in India continues to be under-penetrated, and most of the equipment manufacturers have also maintained focus on expanding sales-cum-service outlets, particularly in semi-urban and rural areas and setting up satellite dealerships and service facilities in the neighboring smaller towns.

Arun Aravindan, Indian Two Wheeler Market Analysis: The Indian two-wheeler (2W) industry registered sales volume of 13.7 million units in 2012-13, a growth of 2.9% over the previous year FY 2011-12. Market sentiments are negative due to high inflation, fuel prices and interest rates – the 2.9% growth reduced by the 2W industry which is less compared to last year growth of 14%. Feb 2013 data released by MSO, manufacturing index also does not show confidence in this sector. Scooter segment has shown 14.4% growth where Motorcycle has shown 0.1% growth only this year. Piaggio has launched its Vespa model and also plan for export from India. Mahindra need to revive its brand position and product value specially brand image in market.

Research has been designed on the basis of both primary data and secondary data.

Survey method will be used to collect the primary data from the respondents. A structured questionnaire will be administered to extract responses.

Secondary data would be collected from various journals, books, magazines, newspapers and reports prepared by researchers. Internet is the major source for secondary data. Apart from understanding the two wheeler industry’s growth, my major task is to analyze the consumer decision. 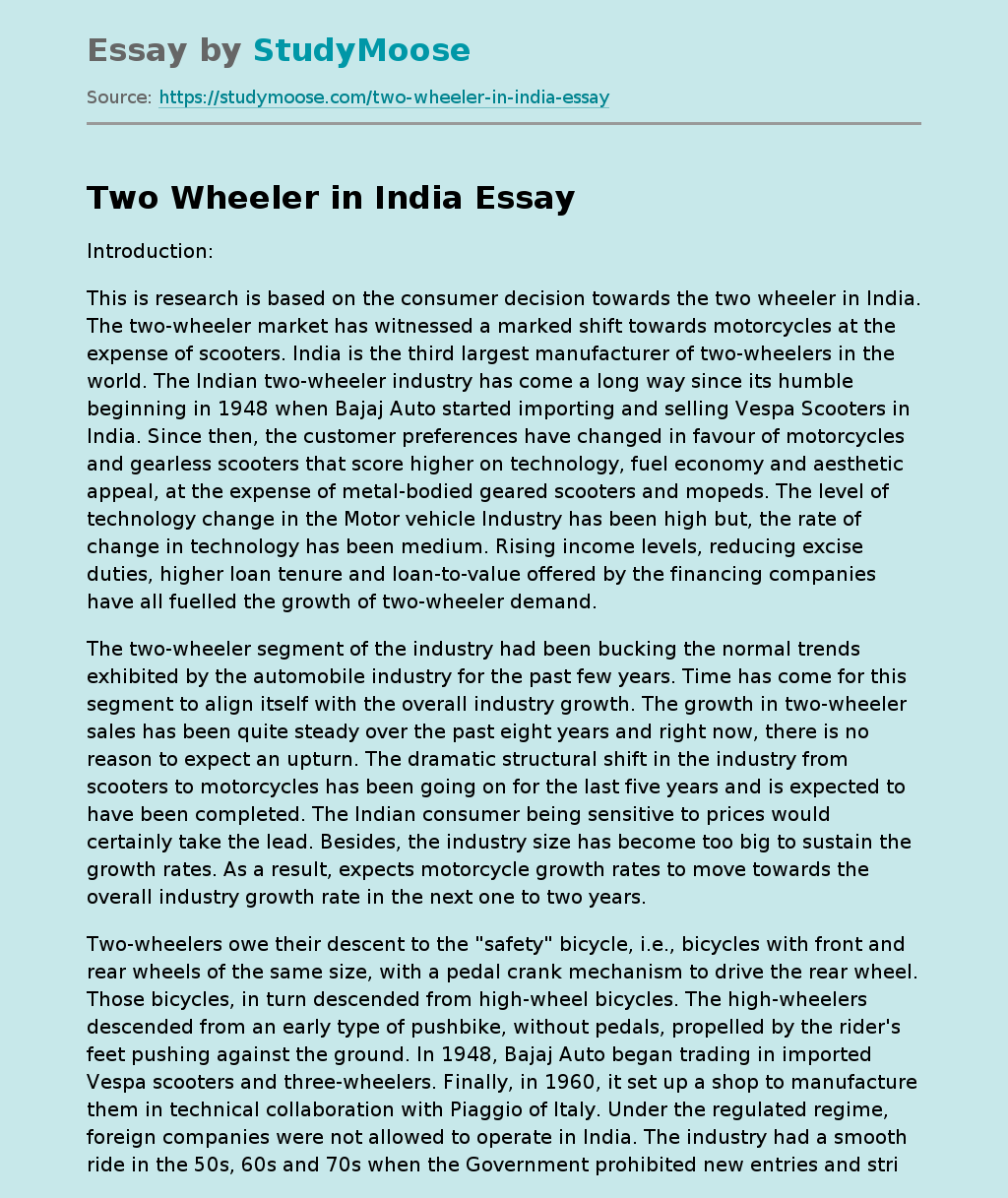