The Pen Is Mightier Than Sword

Honorable principal, respected teachers and my dear school fellows! Today I will try to elaborate a famous quotation by an English author and novelist Edward Wheeler that, “Pen is mightier than sword”

A pen is man’s greatest creation. But we need to deliberate that how really important the pen is? Writers use their pen to write their articles, engineer uses pen for inking. Pen is all we need to record things right away. During the course of study pen is an important tool of a student.

Don't use plagiarized sources. Get your custom essay on
“ The Pen Is Mightier Than Sword ”
Get custom paper
NEW! smart matching with writer

Without it you can not jot down notes. You can not even answer test questions without using a pen. So important is the “pen,” that God Himself makes an oath with it in defense of the Prophet’s soundness of mind and tremendous character: “Nun. By the Pen, and what they inscribe, you are not [O Muhammad], by the grace of your Lord, a madman. And yours shall be an unfailing reward.

The quotation simply indicates that compared with direct use of violence, the process of communication and possession of legal power is more effective tool to influence human being. Where sword symbolizes the use of brutal force to subdue people, pen indicates logical and argumentative communication to win hearts of the masses. I object to violence of sword because when it appears to do good, the good is temporary while the evil it does to the people is permanent. My dear school mates!

Writers are disguised sources of a society, who armed with their pens, cast spells on their readers using words that may pierce right through their hearts and soul.

With effective written communication, writers may convince people and bring a revolution without causing any destruction like the use of sword does. For this purpose the writers should be writers in strict sense of the word. They should not be like mere escapes and refugees on an exile from the jungle of thoughts. This is because the stroke of a pen needs deliberations and not the blind use of force as required by the sword. This is due to the fact that words can inspire better than the use of brute force. It is on the basis of this principle that for children instead of use of violence the slogan of “maar nai piyar” has been adopted. This slogan shows that good words attract people more than the use of force and violent behavior. Honorable principal!

It is only with the use of a pen that you can express your feelings, thoughts and emotions in a better way. Horace, a leading Roman poet rightly says that, “Pen is the tongue of the mind”

Various writers have brought revolution through their scholarly articles and books. For example Allama Iqbal used pen for dissemination of his ideas and messages to the youth of Islamic world. He did not use any weapon like sword to influence members of the Islamic world. Libraries allover the world strengthen this notion that scholars transfer knowledge through the use of pen that is through writing. Books which are the product of a pen, are said to be an effective source of knowledge and in the words of a French scholar, Michal Foucault, it is knowledge that gives you confidence and power. So in order to rule over the hearts of the people you need to express your ideas and convince people through the use of pen rather than a weapon like sword. My dear school fellows!

Pen has always been mightier than sword if you know how to poke with it. All of us should keep in our mind that bereavement of pen has always been proved a serious blow to the human societies. It has promoted ignorance, confusion, disorganization and authoritarianism in the society. This is because there is nothing better than a pen for conquering people in a non violent way. Provided we use it positively. We should be able to protect our world with a pen and not with a gun. That is why Simonson has said, “Your pen is your sword wield it wisely” At the end of my speech I would not forget to quote the words of our national heroin and winner of the International Nobel Peace Prize 2014, Malala Yousufzai who said, “One book, one pen, one child and one teacher can change the world”

The Pen Is Mightier Than Sword. (2016, Sep 11). Retrieved from https://studymoose.com/the-pen-is-mightier-than-sword-essay 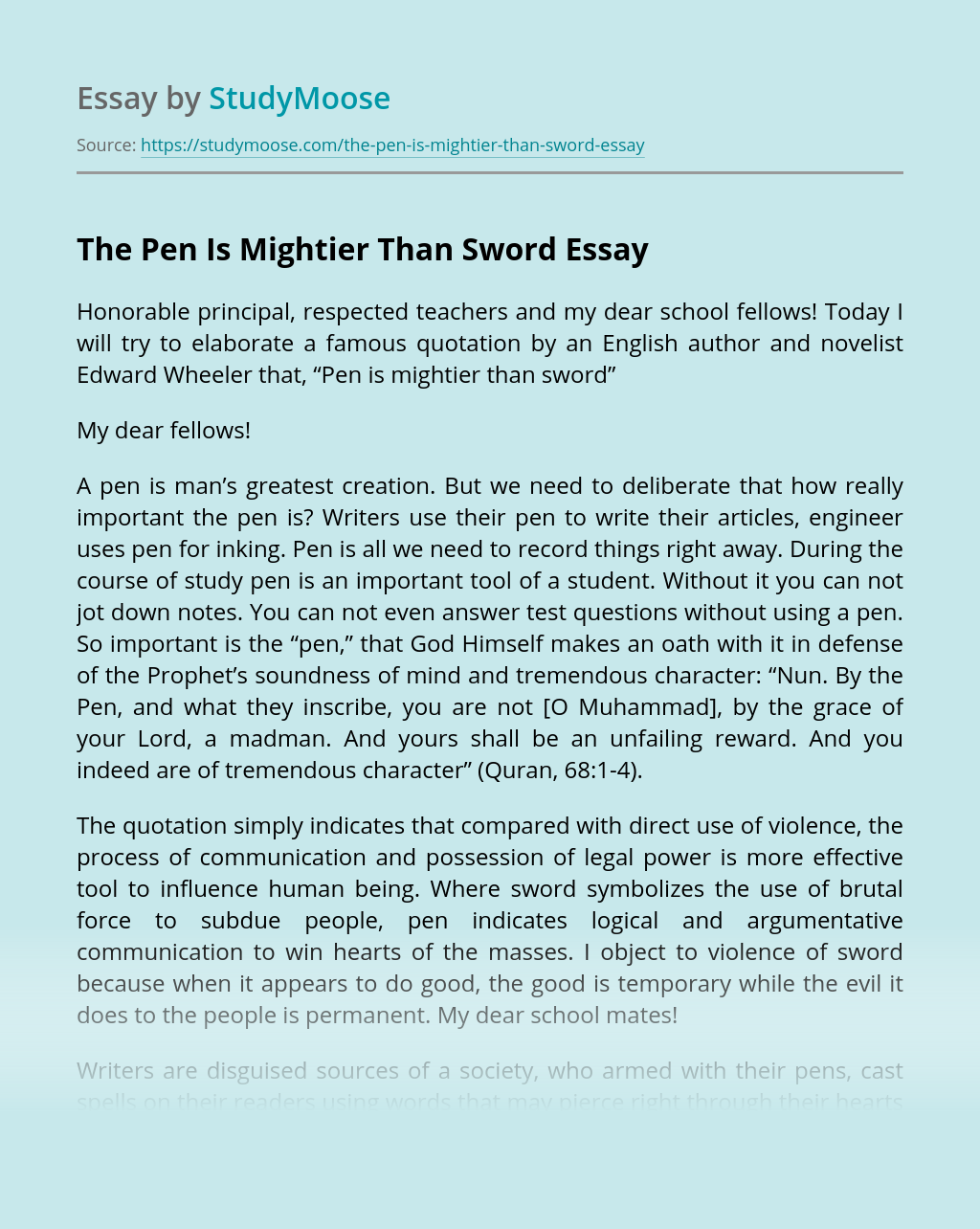