Modernization is the process in which social and economic change is obtained through industrial revolution, urbanization and other social changes that alters people’s lives. Modernization promotes individualism over the unity of traditional communities and encourages rationality over traditional philosophies. Modernization can have both positive and negative effects on society and can often bring about controversy.

Don't use plagiarized sources.
Get Your Custom Essay on Sociology and Modernization Just from $13,9/Page

He also believed that modernization caused people in modern societies to drift apart and personal relationships became more impersonal as people became more self-absorbed (Gesellschaft). Ferdinand Tönnies theory suggests that … modernity turns society inside out so that people are essentially separated in spite of uniting factors (Macionis, J., 2006, page 457). Large cities provide an excellent example of Ferdinand Tönnies theory of Gemeinschaft and Gesellschaft. People pass one another by the hundreds on busy city streets every day; yet, they remain strangers because they ignore each other as they pass.

Even loyalty and trust becomes issues between friends as individuals put their personal needs above others. Peter Berger’s work was greatly influenced by Ferdinand Tönnies theories.

Peter Berger (1977) identified four major characteristics of modernization to describe his theory about how modernization manifests itself.

2.The expansion of personal choice: rather than following the traditional standards of life i.e. religion, faith etc. people have the option to take control and choose their own lifestyle. Berger described this process as individualization.

3.Increasing social diversity: rather than conforming to familial or religious beliefs people are afforded a more rational, scientific outlook and a combination of socially diverse beliefs and behavior through social blending. This diversity is a result of an industrial society’s wearing away of the strong family ties and religious beliefs that once united people from various backgrounds.

4.Orientation toward the future and a growing awareness of time: time is of the essence for people focused on individual gain and an improved lifestyle. “Modern people are not only forward-looking but also optimistic that new inventions and discoveries will improve their lives” (Macionis, 2006, page 446). Schedules in modern society are based on the time on the clock rather than the rise and fall of the sun. Today time and money go hand in hand. “According to Berger, one indicator of a society’s degree of industrialization is the share of people wearing wristwatches” Macionis, 2006, page 446).

The French sociologist Emile Durkheim (1893-1964) shared Ferdinand Tönnies’s interest in social changes due to modernization. Emile Durkheim believed that… “Modernization was marked by an increasing division of labor, or specialized economic activity” (Macionis, 2006, page 457). Durkheim viewed pre-industrial societies as being held together by mechanical solidarity. Therefore, members of a society who perform the same type of work are basically the same and belong in the same category. “Durkheim’s concept of mechanical solidarity is virtually the same as Tönnies’s Gemeinschaft (theory) ((Macionis, 2006, page 457).

As a society becomes more modernized the division of labor becomes noticeable. This division of labor is believed to help unite the modernized society. “To Durkheim, this change means less mechanical solidarity but more of another kind of tie: organic solidarity, [sic] or the mutual dependency between people engaged in specialized work” (Macionis, 2006, page 458).

Durkheim’s view of modernity differed from Tönnies’s in a more complex and positive manner. According to Macionis, J. (2006):Durkheim viewed modernization not so much as a loss of community as a change from community based on bonds of likeness (kinship and neighborhood) to community based on economic interdependence (the division of labor).

Max Weber (1921-1978) viewed modernization as “replacing a traditional worldview with a rational way of thinking” (Macionis, 2006, page 458). Modern societies value efficiency over tradition; therefore, modern people will adjust to anything that will allow them to attain their objective. Weber labeled this adjustable and unquestioning modern society as disenchanted because people are no longer enchanted by tradition. “The unquestioned truths of an earlier time had been challenged by rational thinking. In short, said Weber, modern society turns away from the gods” (Macionis, 2006, page 459). Weber’s main concern with modernization was that science would cause people to stop questioning the meaning and purpose of human existence. Weber’s concern leads to the theories of Karl Marx.

Karl Marx viewed modernization as a capitalist revolution. The Industrial Revolution turned over a powerful and productive control of society to the upper classes. “Marx agreed that modernity weakened small communities (as described by Tönnies), increased the division of labor (as noted by Durkheim), and encouraged a rational worldview (as Weber claimed)” ((Macionis, 2006, page 459). Marx implies that capitalists in their quest of power tear at the fabric of society by drawing farmers and people from small towns into large cities to work in specialized positions in factories. Marx saw this as a way for capitalism to thrive and the upper classes to line their pockets.

Is modernization likely to continue in the United States (U.S.) and is it a worldwide trend? Marx theory of modernization implies that modernization is the foundation of the Industrial Revolution as well as the capitalist economy. Modernization may not continue in some sections of the United States military. “The Air Force’s modernization of the attack warning systems within Cheyenne Mountain will cost more than $700 million from fiscal years 2000 through 2006. DOD officials have stated that they no longer need to continue operating in this hardened facility considering that the threat of an intercontinental ballistic missile strike in today’s environment is low” (Agostino, D., 2007).

However, as long the modern society of the United States associates success with money modernization is likely to continue. As modernization continues capitalism will thrive because more and more small town people will commute or move to larger cities for better paying jobs. Modernization is a trend that is sweeping over the entire world. Just like westernization caught on with the youngest generation of the time modernization catches on with today’s younger generation as well. Tourism is a full-size modern trend. Many countries have modernized natural land marks ad cultural areas as tourist attractions. For instance, Chili has modernized their hot spring areas to attract money from tourism.

Travel industry experts agree that the trend toward modernization of Chile’s good fortune of having natural hot springs, combined with the most sophisticated techniques from spas around the world, has created demand among foreign tourists. Since 2002, tourism in Chile has grown by 13% annually and in 2006 the industry generated US$1.50 billion in hard-currency revenues.

What are the consequences of modernization? Consequences of modernization may be viewed differently based on an individual’s point of view of the changes that modernization brings. One person might say that the upper classes will continue to prosper in this modern capitalistic society while lower classes will struggle more as traditional families will have to work even harder to get ahead. Another person might believe that modernization is the key to bringing societies closer through the blending of society as a whole through industrial technologies such as computers, internet cell phones and so on.

Computers and internet connections provides more information than ever before and new, but it also threatens people’s personal privacy in return. Modern industry has increased productivity through the use of machines rather than manpower, but it has also left many people out of work. Many scientific discoveries have been made since the onset of modernization from medicine that saves lives to weapons that take lives. Nuclear power is one such discovery that brings widespread controversy.

China’s nuclear forces are at a minimum so they may be considered the least likely threat for nuclear war. However, According to Zhang, B. (2007):The tendency in Washington to dismiss China as an inconsequential nuclear actor must be set aside in favor of a clearer appreciation of China’s significance, both current and potential. Over the coming decade, China could very substantially increase the size, sophistication, and overall capability of its strategic force.

As China’s nuclear force progresses with the modernization of nuclear weaponry the United States will be in the position where strategic relations and a shared understanding will have to be made with China or China or China could present a nuclear threat to the Unites States. “A shared understanding of the proper strategic balance of power between the two countries will discourage an arms race and help stabilize the most important bilateral relationship of the world in the twenty-first century” (Zhang, B., 2007). The bottom line is that modernization can have both positive and negative effects on society and communication is the key to evading unintentional disasters.

Based on the research provided perceptions of modernization reveal that modernization is an ever changing system that has taken a path of its own, once a society starts down that path there is no way of knowing exactly what will happen. Modernization brings both positive and negative consequences into a society. The Industrial Revolution brings one invention after another. Some are good and some are bad depending on a person’s perspective. Modernization gives capitalism the upper hand in the world of economy while exploiting the working class society. This brings about the decline of small, traditional communities which will eventually weaken the fabric of these small communities. Consequently, Karl Marx’s theory that capitalists in their quest of power tear at the fabric of society is probably the closest to revealing the true perception of modernization. 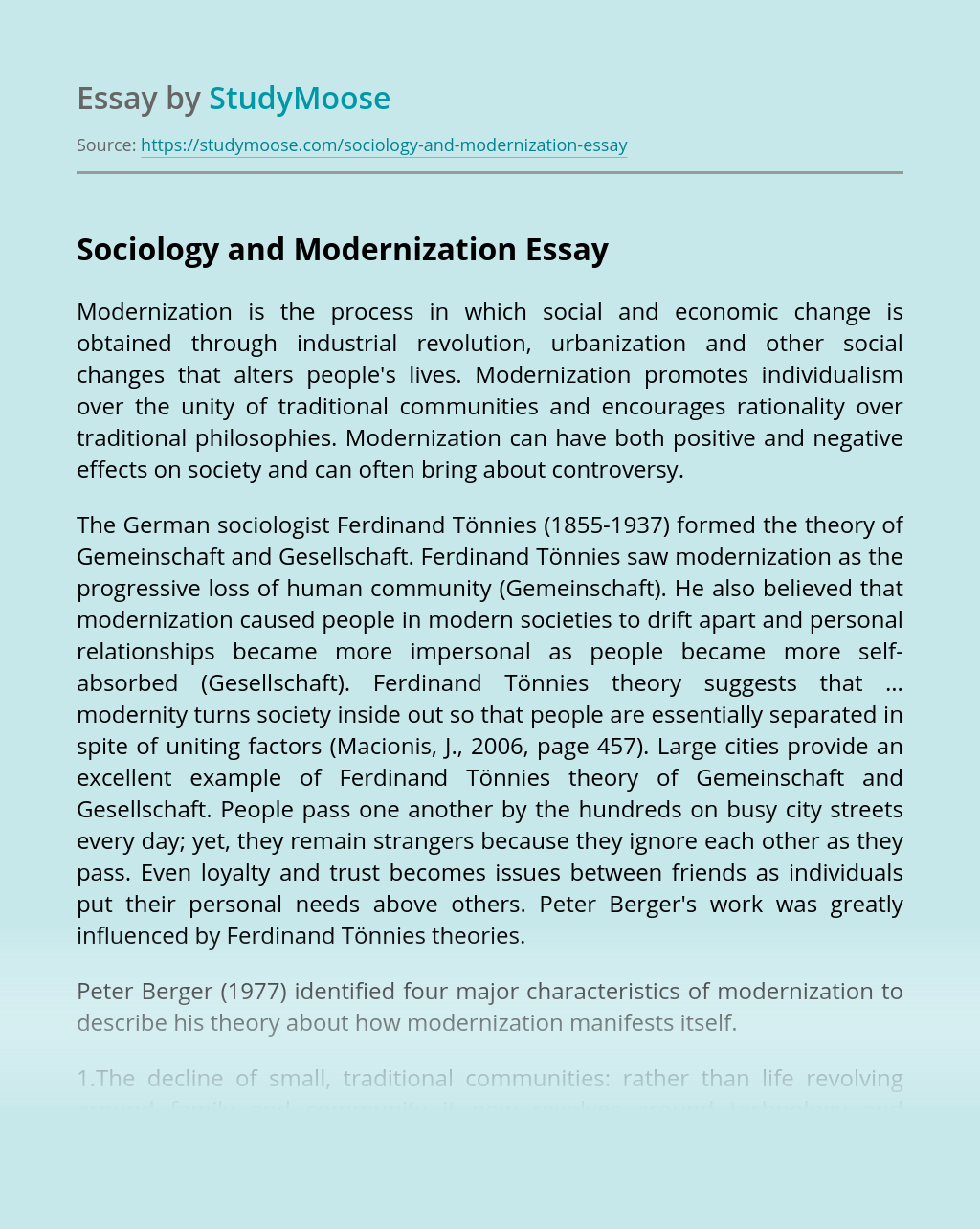 1. Decide whether each of the following descriptions most closely corresponds to being part of a command system, a market system, or a laissez-faire system. LO1 Command System – A woman who wants to start a flower shop finds she cannot do so unless the central government has already decided to allow a flower shop...

Get Essay
Globalization of Levi Strauss

Globalization is a necessary evil that allows business to make huge profits and third-world countries to begin creating a free market economy. While it seems that globalization may be a solution to the problem of poverty and starvation for some people, it may also contribute to issues such as child labor, discrimination, exploitation and health...