Modernization is the process of moving from farming and agricultural society to an industrial society and it mainly deals with societies after the Industrial Revolution of the mid-18th century. Some key features of modernization would be large, formal organizations and division of labor based on specialization of skills and abilities. There is more control over environmental resources such as oil, water, land, and animals. There is also a distinct improvement in the quality of life during this time. Because of a higher per capita income individuals are able to buy more goods and services, have more recreational time, and have better housing and health care.

Turn in your highest-quality paper
Get a qualified writer to help you with
“ Modernization and Indigenous Cultures ”
Get high-quality paper
NEW! AI matching with writer

Modernization can have both positive and negative effects on society and can often bring about controversy. In this paper I will look at examples of how modernization has affected cultures and traditions around the world.

Before we look at the effects of modernization on different cultures we will look at a few specific theories concerning how modernization affects society and community.

The German sociologist Ferdinand Tönnies (1855-1937) formed two theories concerning modernization which he called _Gemeinschaft_ and _Gesellschaft_. Ferdinand Tönnies viewed modernization as the progressive loss of human community – _Gemeinschaft_. He also believed the Industrial Revolution weakened the social bond of families and communities by emphasizing the impersonal business attributes like money, efficiency, and self-interest – _Gesellschaft_. Tönnies belief was that modernization turns societies inside out so that individuals are essentially separated in spite of uniting factors (Macionis, 2006, page 457).

Other theorists such as Emile Durkeim, whose view of modernity differed from Tönnies’s in a more optimistic manner. He viewed modernization as a change from community based bonds to a community based on economic priorities – division of labor. There was Max Weber, who thought that modern societies valued efficiency over tradition; therefore, modern people will adjust to anything that will allow them to attain their objective. Weber felt that for modern people, truth is the result of rational calculation. Then we have Karl Marx, who analyzed modernization as the ascendancy of industrial capitalism. He anticipated a socialist revolution that would lead to an egalitarian society. The problem with Marx’s theories is that he had an idealistic view of how the world would work, and underestimated the dominance of bureaucracy in shaping modern societies (Macionis, 2006).

Traditional culture, in a broad sense, is human activity such as religion, philosophy, moral standards, laws, society, history, and art that have been learned and passed on in a community or group over a long period of time. Whether a society can survive modernization without losing its identity is the question that is debated by many people. In Asian countries such as Japan, Modernization has often been confused with Westernization. This is partly due to the fact that the concept originated during the Industrial Revolution in England.

It is also due to the fact that accepting modernization often meant accepting a Western culture and its resulting way of life. Many feel that Japan is a great example of how a thoroughly modern way of life can exist in a non-western society. Others argue that Japan has become distinctly more western as a result of its modernization. The main thing to understand about Japan is that it has always been on the periphery of culturally developed countries such as China, and has become accustomed to accepting foreign developed cultures. The fact is that Japanese people have always had a great interest and curiosity in imported things, including religion and science. This is why Japan never felt a strong resistance against the introduction of Western culture.

There was a United Nations study conducted in the mid-80’s that examined the effects of modernization, urbanization, and industrialization on the family structure. Part of the findings were focused on developing countries where wide-spread poverty was forcing families to migrate to areas where work could be found; mainly large cities. Technology and development have both positive and negative effects on family. It is true that there is usually an improvement in living conditions; especially in the area of health care, income, living conditions, and education. On the other hand it can lead families into an impoverished life, loss of social identity and traditions, and an effort to ever improved innovation with no regard for the effects on family life.

Most would agree that the positive or negative effects of modernization on the family are not intentional, but a product of growing population and ever-advancing technology. It can be said that few activities resulting from modernization have been geared explicitly towards families; whether to reduce the negative effects or improving their well-being. There have been many changes in family structure due to modernization. Along with the change in roles and responsibilities within the family are changes in values. This includes a greater pressure to adopt the values, culture, or viewpoints of the dominant group. “The emphasis on individualism is probably pre-eminent among the values of developed societies”. (Development and the family, 1985)

There is a very large pressure on families and small communities to integrate into the dominant culture. Although there has been a long-term shift away from the extended family towards the nuclear family, the extended family is still regarded in some instances (among rural-urban migrants, for one) as a way to continue social and cultural traditions while adapting to new circumstances and behaviors (Development and the family, 1985). It is inevitable that there will be clashes between the dominant culture and that of family values.

There are two key aspects of modernization in which we need to explore; Industrialization and Urbanization. Both can be looked at as a byproduct of modernization and have related affects on a society’s culture and traditions. The effects of industrialization on a family, as with modernization, is influenced by the distance they must travel to acclimate themselves to the new way of life. Some of the pressures that a traditional family structure might face include; work schedules that reduce the time a family spends together, less family production as a unit, and a diminished societal network due to migratory labor.

In the U.N study mentioned above, urbanization is listed as the third major aspect of development impacting on family functioning, particularly the rapid growth of rural-to-urban migration (Development and the family, 1985). Some of the negative aspects of urbanization on family life would include decreased communication between family members, separation of family members and lack of communal support for urban migrants, more single-parent households and postponement of child-bearing. All of these factors affect how communities and families develop, and how their culture and traditional values are passed on.

There are also areas like Sao Paulo in South America where modernization has caused substantial population growth over the last 100 years. In the case of Sao Paulo, widespread coffee cultivation created sudden prosperity to a region that was fairly isolated. Then there was another population surge as manufacturing was established in the area. By the middle of the 20th century Sao Paulo became the chief manufacturing center of Brazil. The problem with that much growth in a generally poor country is the mass influx of people. With over-crowded cities come crime, air and noise pollution, traffic congestions, and most importantly a labor force that seriously outnumbers the available jobs (Cohen, 2004).

Many individuals from outlying areas will continue to travel to this city in hopes of a better life, and most will end in continued poverty. It’s possible that many will end up in areas like Prestes Maia. The largest squat in Latin America, some 258 families, nearly 2,000 people, have crammed into this disused textile factory. Its 20 story’s provide shelter for some of the poorest people in arguably the most unequal place on earth (Study in contrast, 2007). There is no longer a sense of community in large cities like this. How can there be a local support network when each individual is busy looking after themselves.

Most people would probably say that globalization and modernization rarely cares for societies and culture, but that statement is not completely accurate. Cultures do not always have to modify themselves and adapt to the global changes that are being imposed upon them. There have been cases, like the Kayapo in Brazil, where natives used modern technology to help fight the intrusion of developers. In the case of the Kayapo people, they used video cameras to film treaty negotiations and then used them against the government when they tried to go back on their word. This seems to be the exception rather then the rule.

In most cases though, the reality is that dominant cultures do overwhelm smaller indigenous cultures. Small communities and societies are often torn apart by the pull of large urban areas. Because of modernization there has been an increase in personal choice. With industrialization come more opportunities for an individual to choose there future. People no longer had to stay on the farm to ensure that the family would produce enough to survive. This also led to the decline of small traditional communities. Individuals and families would travel to where the opportunities were. The problem is that those that are left behind feel abandoned by those who migrate to the cities. This fact alone creates a cultural division between indigenous peoples.

Central and South America are a classic example of how a dominant culture can completely decimate that of the indigenous people. The Portuguese and Spanish left a lasting impression on the indigenous way of life. That influence reached new heights during the Industrial Revolution of the 18th and 19th century. Not only were the Europeans extracting recourses from the area, they were also introducing new ways of thinking, new technologies, and a new type of economy. It would be almost impossible for a lesser developed people to compete against the dominant culture of a technologically advanced society.

2008, from General OneFile via Gale:http://find.galegroup.com/ips/start.do?prodId=IPS 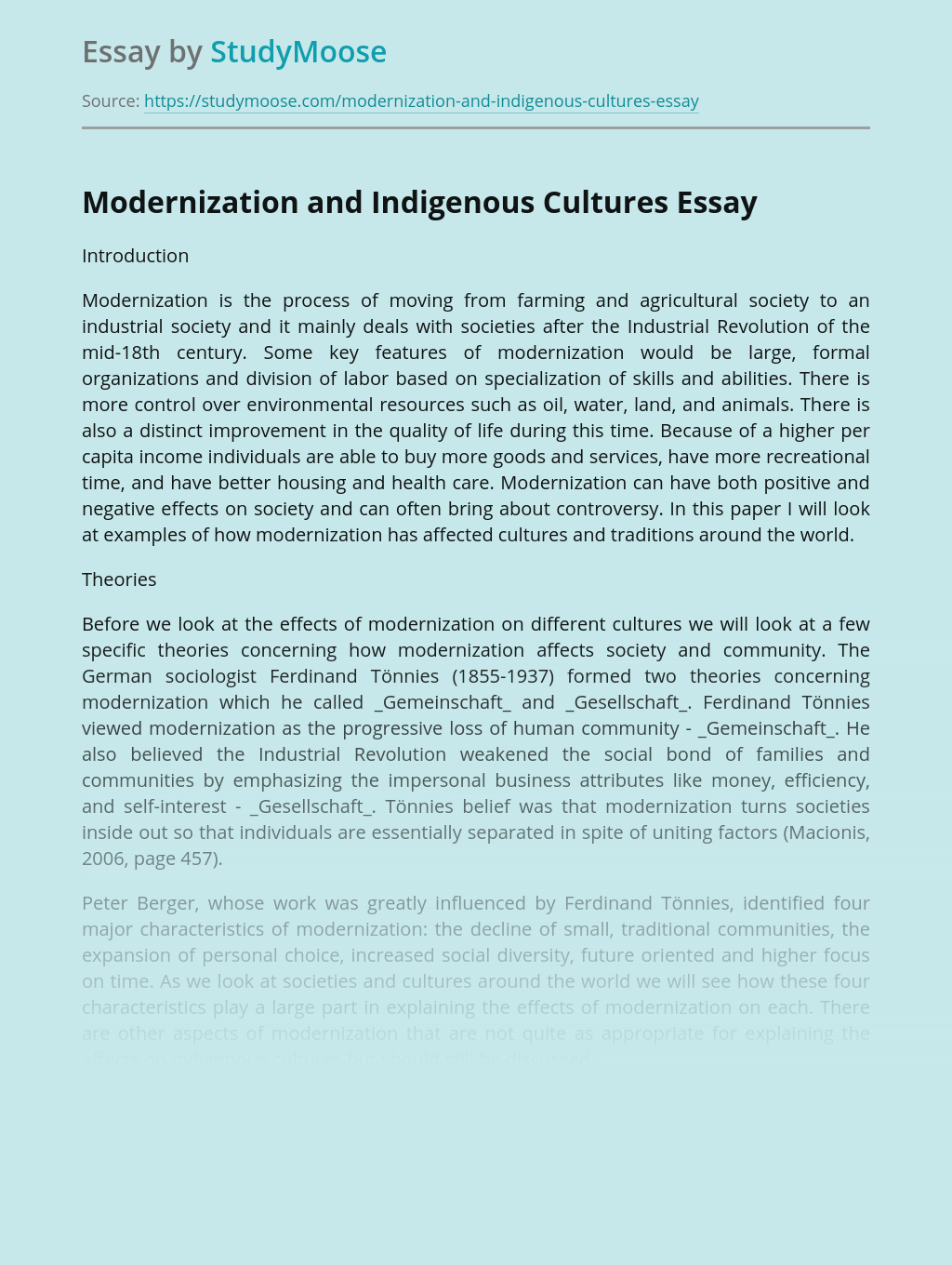 Turn in your highest-quality paper
Get a qualified writer to help you with
“ Modernization and Indigenous Cultures ”
Get high-quality paper
Helping students since 2015
Stay Safe, Stay Original