OBJECTIVE
1. To develop an understanding of terms, concepts and principles related to geography.
2. To understand the use of natural resources and development of regions by mankind.
3. To know the availability of resources, understand, explain their uses and appreciate the problems of development in India and South Asia.

INTRODUCTION
A well-knit and coordinated system of transport is the lifeline of modern India and its developing economy. Today, India is well linked with the rest of the world despite its varied topography and vast size.

Don't use plagiarized sources.
Get Your Custom Essay on Tranportation of India Just from $13,9/Page

The present transport system of India comprises several means of transport including:

National Highways are found all over the country. They are indispensable as far as communication by roads is concerned. National highways connect States, states’ capitals, big cities and ports. National highways carry approximately 40 % of the total traffic but they are only 2 % of the entire road network. Whereas State Highways are considered as the main roads of the State. Major cities of the States and capital of the state are connected by state highways. While District roads are connecting with major roads and village roads. Village roads provide linkage to other roads in order to meet their daily needs and access to nearby markets.

ADVANTAGES:
1. Roads are the cheapest means of communication and track and link villages to the urban areas.
2. Their construction can be undertaken in the remote areas and different terrain, high altitudes and steep slopes.
3. Roads are safer means of transport for perishable commodities like fruits, vegetables and milk from villages to the urban centres. DISADVANTAGES:

PROBLEMS:
1. Most of the roads in the village are unmetalled and badly maintained. Waterlogging is a common problem during rainy season.
2. Traffic jams due to lack of order are very common.
3. The shortage of funds results in poor maintenance of the roads. Damaged roads cause a lot of inconvenience to the public.

SOLUTIONS:
1. In India the existing Road System is totally failed to cope up the transportation demand of a disciplined Road Users. There is a need of restructuring the present organizations to meet out the requirements to modern technology and disciplines for better professional output.
2. Bus Stands/Stops must be under the control of Road Board. These must be well designed, well-constructed, well maintained.
3. New road construction must be stopped and the available funds must be utilized to improve the starving roads of in the country.

RAILWAYS
The Indian Railways is operated and owned by the Government of India, Ministry of Railways. It is considered as one of the world’s largest railway networks containing 115000 km of track over a route of 65000 km with 7500 railway stations. More than 20 million passengers travel daily in Indian Railways and around 2.8 million tons of freight is transported daily. Indian Railways operate on long distances between cities as well as suburban rail systems on a multi-gauge network. Railways in India cover 29 states, 3 union territories and also supplies limited international services to Pakistan, Bangladesh and Nepal. The Indian Railways is divided into 16 zones, which are further divided into a total of 68 divisions. Each zone is administered by a General Manager (GM) and the divisions are under the control of Divisional Railway Managers (DRM).

ADVANTAGES:
1. Railways serve as the cheapest mode of transport for bulky products over long distances like coal, iron ore, petrol and many other raw materials.
2. Railways play an important role in the process of economic development and urbanization.
3. Railways promote integration within the states, e.g. connecting eastern states to the west and north to south.

1. Because goods in bulk quantities are carried chances of goods getting lost are high in case of railway transport as compared to air and road transport.
2. Railway transportation is particularly unsafe for carrying fragile items like glass because these items can easily break at times when a train halts unexpectedly of when the train is speeding up at times.
3. Railway is the cheapest medium of transport. It is hard to find suitable bookings for the transportation of your goods. Railway transport is not suitable in cases of emergency.

PROBLEMS:
1. Railways face a tough competition with road transport, as roads can deliver the goods at the doorstep.
2. Indian railway is facing tremendous pressure of traffic with increasing population, urbanization and industrialization.
3. Unsafe due to poor maintenance-frequent accidents due to human error, terrorist attacks and faulty track repairs.

1. The use of modern machinery, tracks and equipment can reduce much of the accidents which affect the efficiency over a period of time.
2. Effective passenger facilities- Improve the cleanliness of the railway stations and rail compartment and security arrangements.
3. Employ better skilled and trained workers. This helps to increase the public opinion and solve unnecessary problems like delay in the running of trains and inconvenience to the public.

AIRWAYS
Air transport being the most modern and the quickest mode of transport has been gaining popularity. India had bilateral air services agreements with 93 countries as on May 31, 1999. Air India Limited is the major international carrier of the country. Indian Airlines is the major domestic air carrier of the country. The government of India has embraced a new “Open skies” policy. Private companies in India, with predetermined foreign partnership, if needed, can now vie with any two major public undertakings.

ADVANTAGES:
1. Airways are the fastest mode of transport. Although expensive, the surface transport cannot match the air transport over long distances.
2. Air travel is almost indispensible for the business people, for defence, where it saves lives at the time of calamities like epidemics, earthquakes and floods, etc.
3. Air transport has been gaining popularity in spite of its exorbitant rates. The reason is the recent entry of private airlines and their various attractive schemes thereby reducing airfares drastically.

1. Air transport is the most risky form of transport because a minor accident may put a substantial loss to the goods, passengers and the crew. The chances of accidents are greater in comparison to other modes of transport.
2. The aircrafts have small carrying capacity and therefore these are not suitable for carrying bulky and cheaper goods. The load capacity cannot be increased as it is found in case of rails.
3. Air transport requires huge investment for construction and maintenance of aerodromes. It also requires trained, experienced and skilled personnel which involves a substantial investment. PROBLEMS:

1. The airlines are facing a stiff competition from foreign airlines which provide efficient and better services.
2. The poor quality of services provided by the Indian airlines and Air India is resulting in constant fall in traffic as well as tariff.
3. The regular strikes in the airlines are also responsible for damaging their reputation. Public prefers to try alternatives.

1. The airlines have to bring up the standard of quality by efficient service and provide for better amenities.
2. Establish the importance of clean and measurable business targets.
3. Promote the national airlines for better revenue.

WATERWAYS
India has inland navigation waterways of 14,500 km in length. Out of these only 3,700 km are navigable by mechanized boats. Out of the 4,300 km canal length, 900 km is navigable but only 330 km is used. According to one estimate the construction of each km of railway and road needs an investment of Rs. 1.0-1.5 crores and Rs. 0.60-0.75 crore respectively whereas only Rs. 0.10 crore is required to develop same length of water­ways. Inland waterways refer to using inland water bodies like rivers, canals, backwaters, creeks, etc. for transporting goods and people from one place to another. India has a long historical tradition of using such waterways, example: Ganga, Brahmaputra, Indus, Yamuna, Mahanadi etc. With a long coastline of 7,516.6 km, India is dotted with 12 major and 184 medium and minor ports. These major ports handle 95 per cent of India’s foreign trade.

ADVANTAGES:
1. It is environment-friendly.
2. It saves fuel as compared to railways and airways; hence it is the cheapest mode of transport.
3. Many coastal industries such as fisheries are dependent on coastal shipping.

DISADVANTAGES:
1. It is a slow means of transport. Failure of monsoon results into fall in the water-level of rivers making navigation difficult.
2. Area of water transport is restricted. Rivers and oceans are free gifts of nature. Accordingly the operational area remains fixed. Unlike railways and roads, man cannot construct waterways.
3. As against other means of transport, it is less safe. Danger of sinking of boats and ships always looms large.

PROBLEMS:
1. Volume of water in the rivers has lessened on account of construction of canals for irrigation purposes.
2. The peninsular rivers flowing westwards meet the sea through estuaries. Their courses are short and often they make waterfalls and have steep gradient.
3. There is imbalance in coastal traffic movement as traffic is not equally available in both directions. Hence, it makes it necessary for the ship to make the return journey.

1. Improve the connection of the Indian ports with their hinterland.
2. Need foe effective management of coastal traffic.
3. Indian ports need to be well planned and spaced out.

CONCLUSION AND SUMMARY
I am very delighted to have completed the project successfully with no hassle or any major problem. It was a good learning experience for me and gave an outlook on how to present formal projects. 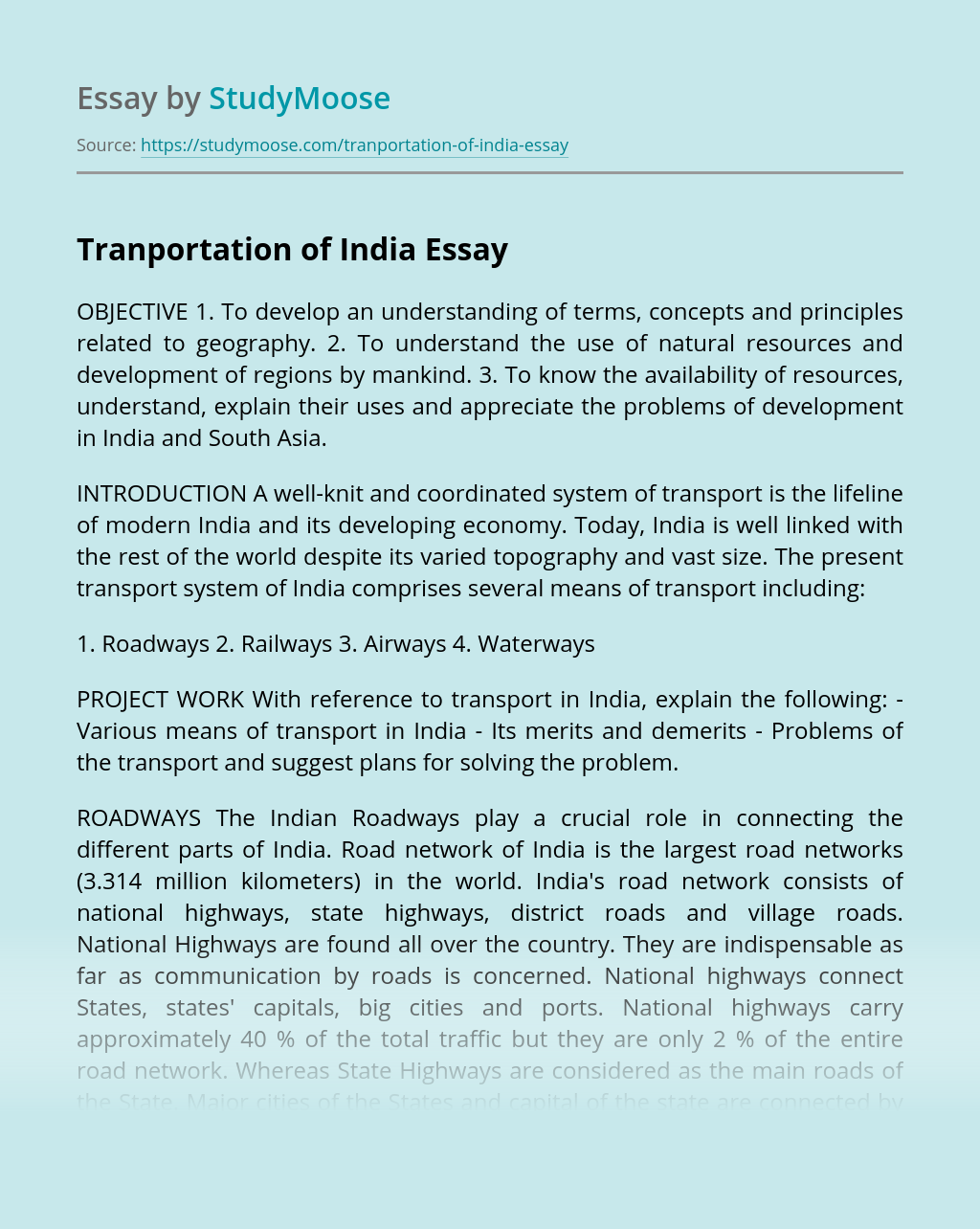 The hours neared towards my very special day. I was nestled deep in comfort and warmth as I awaited the ear drumming beeps of my alarm clock. I turned to look at the digital clock and its luminous numbers covered by a thin layer of glass; it was 11:00p.m. It had only been a few...

Bargaining Power Of Supplier and Threat of Substitute Products or Services

Bargaining Power of Suppliers: In the traditional circuses industry, the quality of the show was measured by the presence of star performers such as Clyde Beatty, Tom Mix, John Robinson the rodeo rider and wild animal trainers, who owned exotic animals had gain immense popularity in the circus industry. That could be exerted considerable bargaining...

Abstract This paper is an analysis of Road King Trucks’ new task which is presenting a new product into its line of product. I will decide whether run the task or not. Six problems will be talked about as follows 1) value of energy expense; 2) job’s capital; 3) cost of capital; 4) pick an...

The Disadvantages and Advantage of Each of These Means of Transport

In our modern word today, there is transport of choices for us. Although people do enjoy the convenience and privacy of traveling in their own private vehicles, in my opinion they may choose public transports. Overall, we are able to recognize its huge benefits such as safety, facility and familiarize with environment, even in some...