The creation of an identical copy of something is the process of cloning. It is simply a form of asexual reproduction. Cloning is a big issue in todays world of science because of the potential benefits, the risks involved, and medical, ethical and religious conflicts. Plants and animals have already been cloned and stem cell research is already going ahead, and maybe one day science will be able to clone a human. The division of opinion on cloning will require many forums of discussion to cover all aspects.

Don't use plagiarized sources. Get your custom essay on
“ The advantages and disadvantages of cloning ”
Get custom paper
NEW! smart matching with writer

There are serval types of cloning, Reproductive, therapeutic and DNA cloning.

Any animal created by reproductive cloning is not in fact a perfectly matching copy of its donor. Reproductive cloning involves generating an animal that has the same nuclear DNA as another. The process used for this is called Somatic Cell Nuclear Transfer. Scientists take genetic material from a cell of the adult donor and place it in an egg which has had its nucleus removed.

This egg then must be treated so the process of cell division can start taking place. Once it is ready it will be placed into the uterus of a female to develop until birth.

In 1997, Dolly was the first adult mammal to be cloned. The technique used to clone dolly was the Somatic Cell Nuclear Transfer. She lived for six years and successfully gave birth. Dolly was not perfect though; she suffered from progressive lung cancer, which lead to her early death. Scientists argue whether her early death had anything to do with being a clone.

They stated that other sheep had died from this disease and it had no connection with her being a clone.

Dolly was the one success of many attempts. 277 eggs were used and out of them only 29 embryos and they only created 3 lambs, 2 of which died at birth. When dolly became well known from the media coverage, it demonstrated that adult cells could be programmed to make a whole new organism. This was when the theory of one day being able to create human clones became closer to being possible and started controversy between peoples different views on the matter.

The benefits of Reproductive cloning are that it can be used to mass-produce animals with specific qualities for research on studying human disease. Scientist could test the effectiveness of drugs and reduce the amount of people and animals used in research. But of course this would only be if the reproductive cloning success rates were to improve.

Also, reproductive cloning would be a great way to increase the number of animals that are hard to breed or in danger of extinction. An endangered Asian ox was effectively cloned but died after 48 hours. In just twelve hours it was able to stand but not long after was diagnosed with a common disease and passed away. The fact that scientists say both Dolly and this ox died of common diseases makes me think that cloned animals have a weaker immune system and are more vulnerable to disease.

Therapeutic cloning is the cloning of particular body parts to be used for medical reasons. It follows the process of Somatic Cell Nuclear Transfer except the embryo with the replaced DNA is not placed into a womans uterus to develop; it is encouraged to grow as an organ or tissue. This type of cloning is seen as a great benefit for treating people with diseases such as heart disease and different cancers using stem cell research. The basis of all cells in very tissue and organ of the body are stem cells. Stem cells can be programmed to develop in to any type of tissue or organ. Stem cells and the technology of therapeutic cloning can be used to create healthy organs and tissues to restore damaged parts of the human body.

Therapeutic and reproductive cloning both use the same Somatic Cell Nuclear Transfer technique. They have different names because of what is intended of the clone, to reproduce organs and tissues for replacement in the body or to place an egg in the female uterus and create new life.

DNA cloning is also known as Recombinant DNA technology, molecular cloning, and gene cloning. It involves taking a DNA fragment from an organism and transferring it into a self- replicating element. The DNA can then be transmitted into another cell. This process has been around for a while and is common in molecular biology lab tests.

DNA cloning does not require a living organism. So if samples of DNA from an extinct animal can be found it could be possible to reproduce an animal that has wiped out.

The cloning of a plant is not too difficult to achieve as plant cells have a simple structure. Most young plant cells have their own ability to divide, grow and develop a new plant given the right environment. Individual plant cells are cultured and can then grow into new plants. This technique allows scientists to select a desired plant and produce as many identical copies they wish. A benefit to being able to cloning plants is that it is an easy procedure and not very expensive. Being capable to mass-produce plants and crops could help out in third world countries.

The future dilemmaScientist of Princeton University, Dr. Lee Silver, a renowned specialist on cloning, has produced a human cloning process based upon the sheep cloning procedure.

How to clone a humanIn 1998, a scientist in Chicago claimed that he had gathered a team of scientists that were prepared to clone a human. There were people that volunteered to be cloned, couples that had one infertile partner. He said that the best choice would be to choose a couple where both partners were infertile and that way they couldnt transmit any genes unless it was by cloning. It hadnt been decided whether to start the procedure because it was questioned, should it be done?At that point in time cloning a human would be unethical mainly due to questions on safety of technique and the possible physical harm to those involved.

There are situations that are seen as ethical reasons to clone:For a couple that cannot reproduce because the woman has had her ovaries removed and the man has become sterile, and fear adopting or using a donor embryo because the child will be nothing like them, cloning one of them would be a good solution for them. A stronger reason for why cloning should be allowed is for prevention of transferring disease. A mother has a family history of breast cancer and has also tested positive to the cancer gene. If she chooses to have children there are extremely high chances that she will pass on the gene. Cloning of the father could be a good option if his family has a good history.

Even if there are acceptable ethical exceptions to cloning, there are still many risks involved. Not only is reproductive cloning very expensive, but its is also very unproductive. Many cloned animals have been born with abnormalities and died at an early age. Even if no abnormalities are detected at first, clones have been recognized to die of unknown causes.

Religion is probably the most powerful opposition to cloning as it shapes the beliefs of many people. Religion is struggling with dealing with the advances of science. Science has the capabilities to save the lives of people thats would have died in the past. Science is doing more and more to prolong life. Cloning is considered playing God and messing with life. There is also the issue of the soul or spirit which all agree cannot be cloned and the subject of individuality.

In 2001, 749 people participated in a survey Is cloning playing God? 32 people said that cloning was playing God and numerous more expressed related ideas. People responded saying: creating human life is Gods job, and His alone.Human cloning is going too far and trying to take Gods place in our creation.If you believe in God you believe that you were created by him, and it is wrong for us to engineer a human being.Many strongly religious people also dont see the point in cloning spare parts to prolong life.

In the future cloning techniques could be used to improve methods of producing desirable plants and animals. The day could come when we select the best plants and animals with superior genetic traits and produce exact copies in large quantities in less time than it would take under normal conditions.

Overall I agree with cloning. Religious beliefs against cloning are very strong but there are many potential the benefits. If the techniques for cloning could be improved and the risks could be minimised, I believe cloning should be allowed. The cases where cloning could allow childless couples to have children when no other method is successful or where there are chances of transferring diseases cloning would be a great option. Also having the ability to study diseases and then being able to replace damaged organs and tissues and cure people would be a huge medical benefit. Not only does cloning have medical benefits, it also can lead to better qualities in the way we live. Food such as beef and dairy can become more efficient and cheaper, and so can clothes from the wool industries. Crops are already benefiting from genetic cloning and this is accepted my most already. 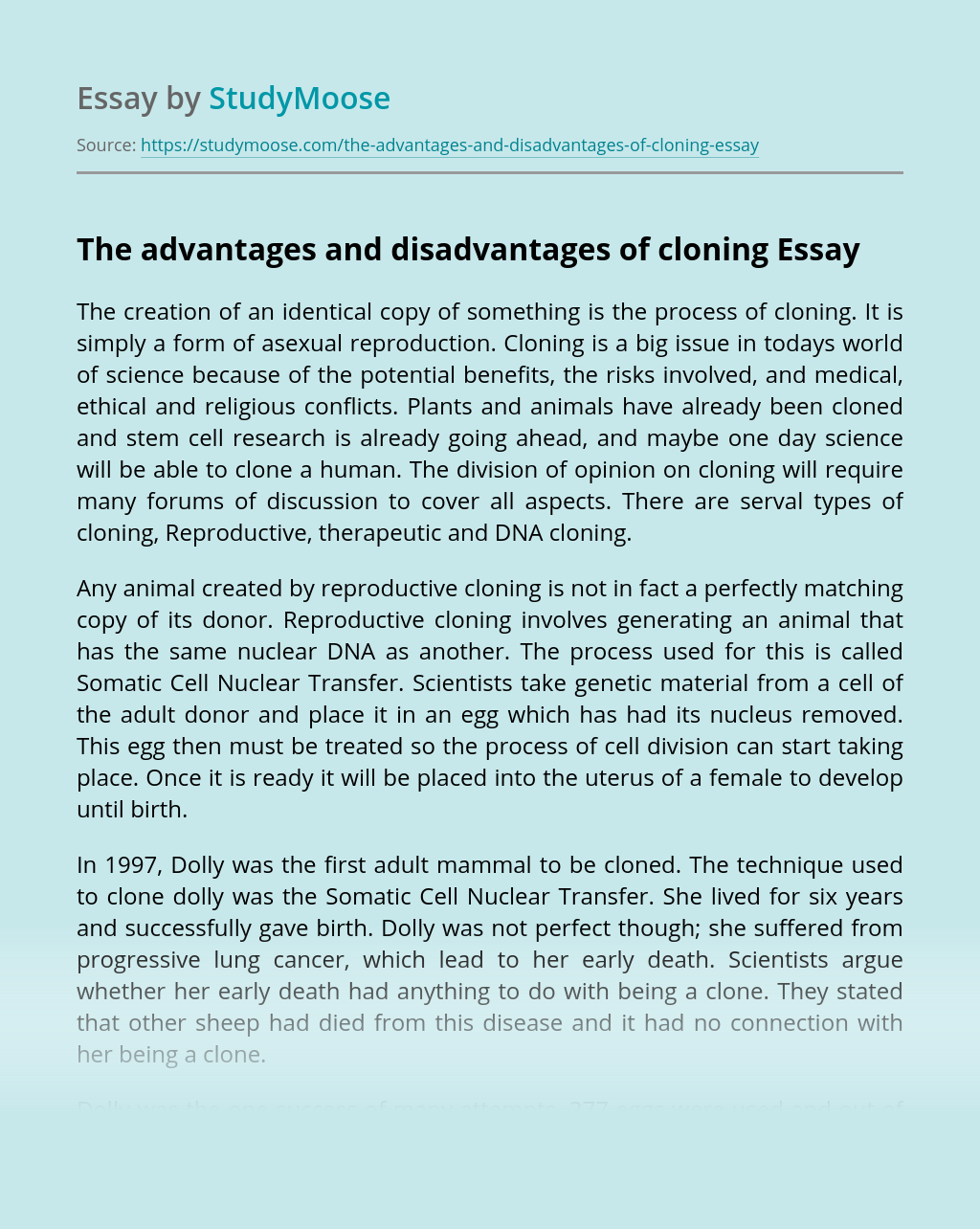