Cloning is the process of generating a genetically identical copy of a cell or an organism, which many scientists have not yet figured out how to do so. Over the years, cloning has become a worldwide controversy on whether it should be allowed or not. People would disagree saying that cloning goes against religious critics, “It’s like a man becoming creator”. Other people would agree by saying that, “It could cure some disorders”. I would disagree with cloning for many reasons.

Don't use plagiarized sources. Get your custom essay on
“ Ethical Issues of Human Cloning ”
Get custom paper
NEW! smart matching with writer

Cloning is more harmful to do, due to how much it fails and more people are being put at risk in doing so. In fact, over 90% of human cloning has been considered a failure, human DNA is being put at risk by that.

Scientists in South Korea claimed to have successfully cloned a human embryo in 1998. The experiment was interrupted quite early when the clone was just a group of four cells. Clonaid, A man who is a part of a religious group that believes humans were created by extraterrestrials, held an intervention to announce what he claimed to be the first cloned human.

However, Clonaid never presented any evidence to prove the existence of this clone. In 2002, a group of students attending Seoul National University in South Korea claimed to have created a cloned human embryo in a test tube, later finding out they had no proof. The President’s Council on Bioethics wrote, “At this writing, it is uncertain whether anyone has attempted cloning-to-produce-children. Although claims of such attempts have been reported in the press,13,14 no credible evidence of any such experiments has been reported as of June 2002”.

Human cloning has not reached its full potential yet, so it will constantly fail. Not to mention how painful the procedure is to get the eggs from a woman.

The process is not only painful but unsafe, and very expensive. Women are given drugs to stop the production of their ovaries, which commonly messes with the menstrual cycle. Overall, ovarian cancer could occur after getting eggs harvested, due to scarring. The eggs would have been embryos. Embryos are human beings that have not had the chance to develop all for experimental purposes. Life could be in the form of eggs, embryos, or an adult person it’s wrong when it regularly fails. There are many other risks involved including the ovum donor, a nucleus donor, and a woman who bears the embryo for implantations, accompanied with all the risks to the clone in the procedure. In the end, the procedure is to difficult to perform without there being too many risks, it is not worth going through.

Cloning is simply unethical, it would violate human rights in various ways. It would violate the freedom of beliefs and thoughts. Cloning would also reduce human dignity. Humans would be able to be sold as products. If we support that, we would be violating other human rights, like no one should be held in slavery or servitude right. If a clone successfully works it would raise the question of human rights to an exclusive identity for the clone. People would exclude the clone and act as if it’s not human due to how the clone was made, which could cause a divide among everyone. Human clones would have unique preferences, but a loss of individuality is still possible. They would be ultimately twins of someone else made in a test tube, despite the age of the other person might be. A clone shouldn’t be created if they don’t have the right to have their own identity, a person shouldn’t have the decision of making that for them. Cloning could also create psychological distress and harm to the clone. The clone could feel that their life is already laid out for them and have no choices to make. That could possibly cause a lot of mental harm to the clone. They would most likely face emotional problems and judgment from the press and everyone else about their identity.

Many people bring up the fact that organ replacement would be an option if cloning was possible. Creating a cloned organ requires human egg cells which are painful to get, and aren’t cheap. Mathew Herper wrote a paper called Cloning’s High Cost, in paragraph seven he said: “required a mere 100 eggs, taken from ten donors, the cost of simply paying the donors could easily reach $50,000”. The price goes up from there considering how much the person has to pay for the treatment to happen. Most individuals wouldn’t even come close to having the money to pay for a cloned organ. Cloning an organ is difficult and has several complications in the process. If someone does have the money, they are paying such a huge amount on an organ that isn’t guaranteed to work. If the organ does work in the beginning, it can have a lot of difficulties in the long run, which presumably isn’t worth jeopardizing life for. Many Christians disagree with cloning humans.

The majority of Christians disagree with cloning, such as Roman Catholics, fundamentalist pastors, and Southern Baptists. God said, let us make man in our image, after our likeness and let them have domain over the fish of the sea, and over the birds of the air, and over the cattle, and overall the earth, and over every creeping thing that creeps upon the earth. So God created man in his own image, in the image of God created him; male and female created he created them. (Genesis 1:26-27) The above quote says male and female created them, that wouldn’t be the predicament as the clone would develop at a lab. The purpose of sex is for reproduction. Cloning would eliminate the need for reproduction.

Cloning has too many risk and circumstances that could occur that is worse for everybody, especially since it’s not assured to work. If someone did clone a organ it would most likely have many difficulties in the long run. Not to consider the price people have to pay to the donors and other people. The disadvantages of cloning certainly surpass its advantages so far. The issues extend from ethical, and religious values. Cloning should not be allowed because of the numerous concerns, disagreements, and issues by the various attempts to produce clones, but have failed on several occasions. 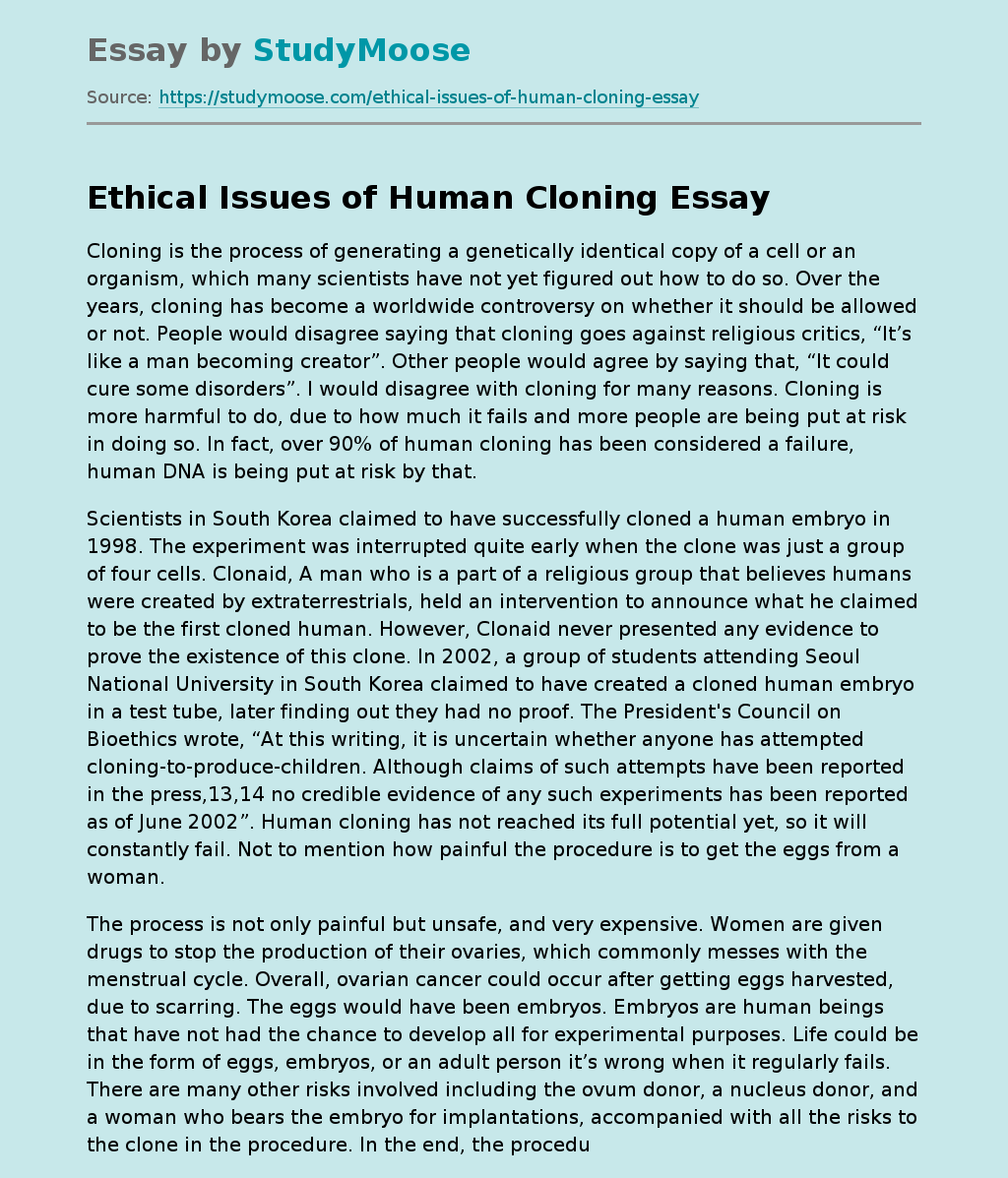