How was the Gupta Empire (India) scientifically advanced?

When thinking back to the Gupta Empire in India, one might remember the famous works of literature, or perhaps the vast lands conquered by the great rulers of the time. But it would be imprudent to ignore the influential achievements made in the areas of science, medicine, mathematics, and astronomy that made the empire scientifically advanced. Many people fail to realize that countless things mistaken for solely modern-day science, for example, plastic surgery, existed centuries ago. Here, the technologies of the Gupta Empire (320-467), such as the development of a more accurate value for pi, the perfection of the modern numeral and decimal system; surgery, inoculation, the formulation of medical guides and a better calendar; and lunar astronomy, will be discussed in detail.

Don't use plagiarized sources. Get your custom essay on
“ How was the Gupta Empire (India) scientifically advanced? ”
Get custom paper
NEW! smart matching with writer

First we will deal with the area of mathematics. One of the most recognized achievements of the Gupta period was the highly accurate calculation of pi, made by the renowned mathematician Aryabhata. Before this time, pi, the value that explained the relationships between the area, circumference, diameter, radius, and volume of circles and spheres, was frequently represented by Indian mathematicians as three, or the square root of ten.

(Although both of these values are far from accurate, the fact that the civilization had a knowledge of geometry and mathematical relationships is proof of scientific advancement, especially when one compares it to Europe, which in the eleventh century still had no knowledge of mathematics.) Aryabhata calculated pi to the fourth decimal place at a value of 3.1416.

Aryabhata also studied and improved other concepts of mathematics; for example, he determined the rule for the area of isosceles triangles and researched algebraic identities and intermediate equations.

His work can be observed in the Gitikapanda, a book which includes a trigonometrical sine table, rules for extracting square and cube roots, the concepts of spheres, pyramids and other plane figures, concepts of interest, the rule of three, and fractions, as well as the principles mentioned previously that pertain to him. All of these ideas can be found in modern-day science, which shows their great influence.

Another prominent Indian mathematician of the Gupta period was Brahmagupta, who systemized the rules of astronomy, arithmetic, algebra, and geometry and published his works in the Brahmasphuta-Siddhanta and ‘Khandakhadyaka.’

Other mathematical knowledge that had its foundations with Indian mathematicians were the so-called “Arabic” numerals and the decimal system, as well as the concept of zero and symbol for infinity, all of which previously did not exist. The number system that Gupta mathematicians devised was based on ten, and was the first of its kind. After a period of time, it was passed on to the Muslims of Baghdad, and then to the Europeans, which is why it is referred to as Arabic, though it really had its origins in India.

Indian medicine was also remarkably advanced. Indian doctors of the Gupta period knew how to perform surgery, including plastic surgery to repair injured ears and noses–something thought of exclusively as new-age medicine and only recently perfected in the United States–and were experienced in setting broken bones. Furthermore, their surgical methods were quite sophisticated, as they knew to sterilize their tools before and after usage in order to prevent the spread of diseases and to keep a level of hygiene. More proof of their advancement in medicine comes from their philosophy of it; like ancient Greek doctors, as well as the doctors of today, the doctors of the Gupta Empire used an ethical code similar to the Hippocratic oath, in which they pledged to be honest and moral in their practice of medicine.

Indian doctors were the first to give inoculations to prevent diseases, and were well ahead of their European peers, who did not give vaccines for another 1,000 years. Their cowpox vaccine was helpful in preventing epidemics of the fatal smallpox disease, and they even had free hospitals in which to administer it. Ironically, this is perhaps more progressive than today’s society, where free hospitals are considered an unreachable ideal.

As well as advanced surgery and inoculations, the Indians of the Gupta Empire possessed medical guides much like those of today, such as the Bower Manuscript and the Hatyayurveda. These manuals contained information on things such as medicinal plants, prescriptions, diseases and children’s medicines. In total, “…these works classified more than 1,000 diseases and described [the properties of] more than 500 medicinal plants,” such as garlic, a lotion that promoted eyesight, oils from trees, etc. There was even information on animal disease treatment! For these reasons, the Indians from the Gupta period were extremely advanced in their knowledge of medicine and treatment of ailments.

Another area of science that flourished during the Gupta Empire was astronomy. The partial cause of acquired knowledge pertaining to it was the increase in trade, because while at sea, sailors used the stars to find their positions. Knowledge of astronomy also increased because of the work of Aryabhata, the mathematician previously mentioned. He was the first to tell that the earth was a sphere that rotated on its axis and revolved around the sun, and that lunar eclipses were caused by the shadow of the earth falling on the moon. He even founded his own mathematical-astronomical school and wrote a book on astronomy, called the Aryabhatiya.

Thus, scientists of the Gupta period were knowledgeable even of such complex areas of science as astronomy. With an increased knowledge of astronomy, scientists were able to keep better time, basing their calendars on the cycles of the sun, appropriating a seven-day week, and breaking each day into hours, as is the way with Western timekeeping. Aryabhata had calculated the length of the solar year to 365.3586805 days, which is very close to modern measurements made by an atomic clock–thus the calendars of the time were accurate.

Another well-known astronomer from the Gupta age was Varahamahira, who in the sixth century wrote the Panchasiddhantika, which summarized other astronomical works, and the Brihat samhita, an encyclopedia of astronomy and other sciences. Paired with the work of Aryabhata, Gupta knowledge of astronomy was ample.

The people of the Gupta Empire were technologically very well developed. They had a great knowledge of medicine, astronomy, and mathematics, had an accurate value for pi, knew how to perform plastic surgery and administer inoculations, understood the stars, and were far ahead of other areas, such as Europe. Their advancements were a representation of an excelled and sparkling civilization that will be remembered for centuries to come by scientists and philosophers alike.

Beck, Roger B. (et al). World History: Patterns of Interaction. McDougal Littel. Boston. 1999. This textbook provided quality information that was relevant to the topic and accurate when compared to other sources.

Binongo, Jose Nilo. “Randomness, Statistics, and Pi.” Proquest. online. Internet. 1 June 2002. The source was not relevant to the topic, as it pertained to modern estimations of pi, but was interesting and of good quality. The website through which I obtained it was helpful and easy to use.

Cajori, Florian, Ph. D. A History of Mathematics. Macmillan. New York. 1924. The book gave good information on general advancements that were made in India, but did not state periods, which made the information difficult to navigate. However, the information was accurate and easy to read.

Chattopadhyaya, Debiprasad. History of Science and Technology in Ancient India. Firma Klm Private Limited. Calcutta. 1991. The majority of the book focused on very early advancements that took place long before the Gupta period, but there was some valuable information at the end on the topic.

“Gupta.” Encyclopedia.com. online. Internet. 7 May 2002. The information, though accurate and relevant, was not specific enough to really help.

Jaggi, O.P. Dawn of Indian Science: Volume Two. Atma Ram & Sons. Delhi. 1969. The information was irrelevant to the time period as well as inconsistent with the other sources.

Jain, Nem Kumar, M. Sc. Science and Scientists in India. Indian Book Gallery. Delhi. 1982. The book was helpful in identifying names of people and their achievements, but had very little information on the topic otherwise.

Krieger, Larry S. (et al). World History: Perspectives on the Past. McDougal Littel. Boston. 1997. The textbook gave a general overview of the information but did not go into specifics. However it was accurate, relevant, and helped spark interest in the topic.

Langer, William L. (ed.). An Encyclopedia of World History. Houghton Mifflin. Boston. 1968. The information was relevant and accurate, but not specific. It did, however, provide some interesting new details that were not known previously.

Mookerji, R. K. The Gupta Empire. Shri Jainendra Press. Delhi. 1969. The information was relevant and accurate when compared to other sources. It was well-organized and provided useful information of the topic.

Papanek, John L. (ed. et al). Ancient India: Land of Mystery. Time-Life Books. Virginia. 1994. The information was accurate and somewhat relevant to the topic. It was a little difficult to follow, but did provide some good information.

Ronan, Colin A. Science: Its History and Development Among the World’s Cultures. Facts on File Publications. New York. 1982. The information was interesting and relevant, but badly organized, as it did not provide specific dates. Also, it did not go into great enough detail.

Saran, Santosh and Ravindra N. Singh. History of Science and Technology During Gupta Period. Prachi Prakashan. New Delhi. 1994. The source contained some relevant information in the beginning that was accurate and of good quality. It gave specific information on areas usually ignored, such as animal medicine.

Smith, Vincent A. The Early History of India. Oxford University Press. England. 1924. The book was not very relevant to the topic, but helped clarify previous information with dates.

How was the Gupta Empire (India) scientifically advanced?. (2016, Jun 27). Retrieved from https://studymoose.com/how-was-the-gupta-empire-india-scientifically-advanced-essay 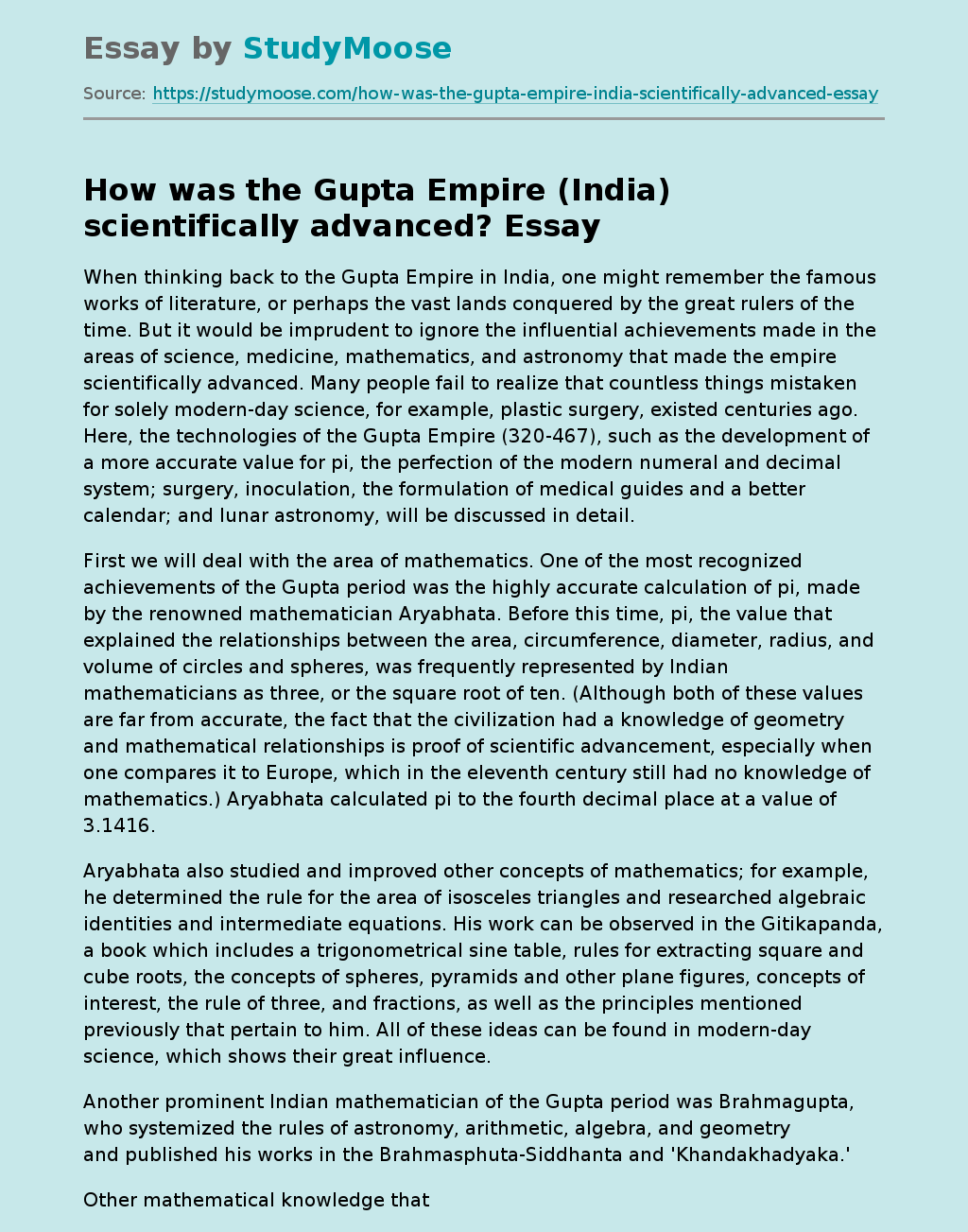